I went to the garage today expecting to be able to go for a ride in the '10 this morning. No such luck, third flat tire since I bought the car. This particular tube on the RH front had been patched three times previously. One of the patches had come loose. Time for a new tube. 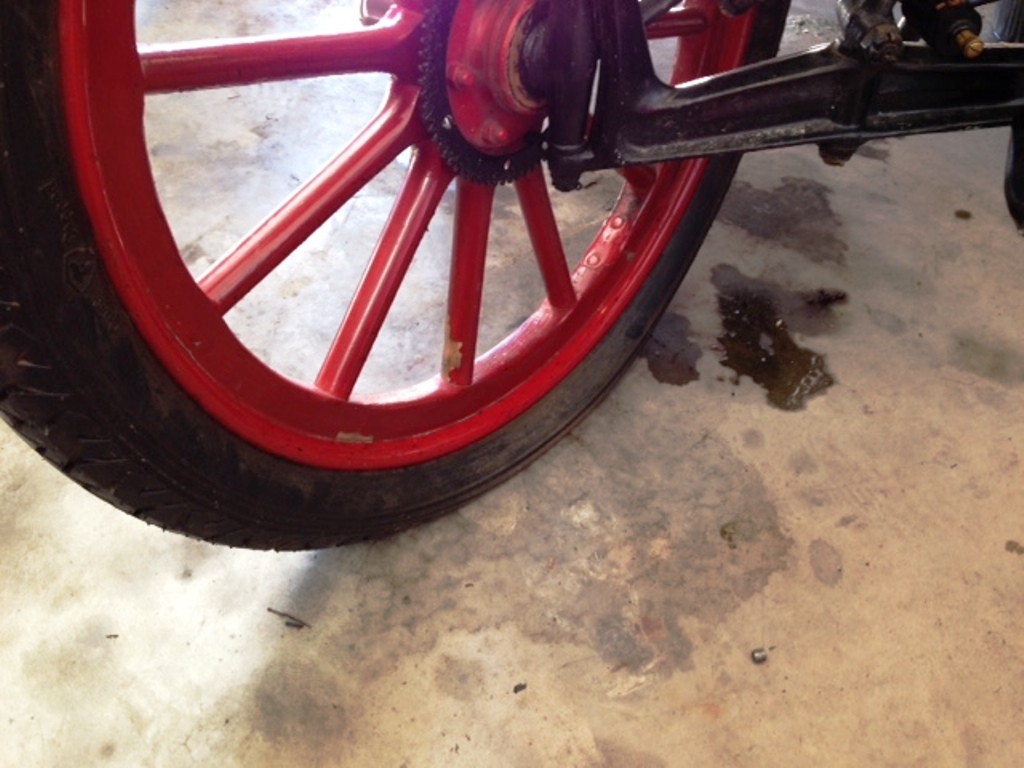 I took the time to photograph installing an original Schrader metal valve stem in the inner tube today. To start with I cut the valve stem off a brand new tube purchased from Wallace Wade tire in Dallas. I clamp the rubber stem in the vise, then use a razor knife to cut it off flush at the tube. 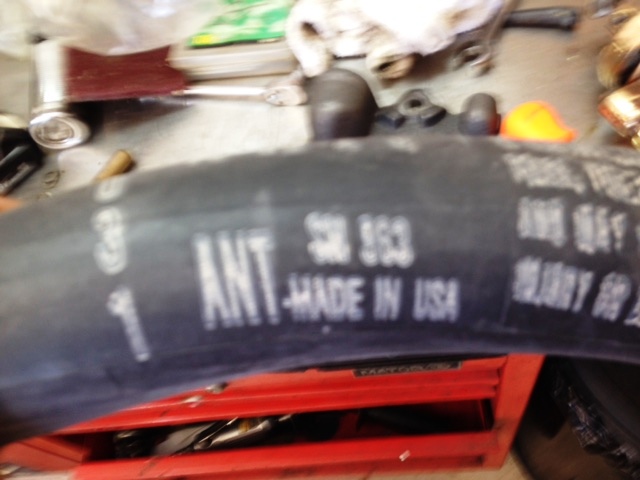 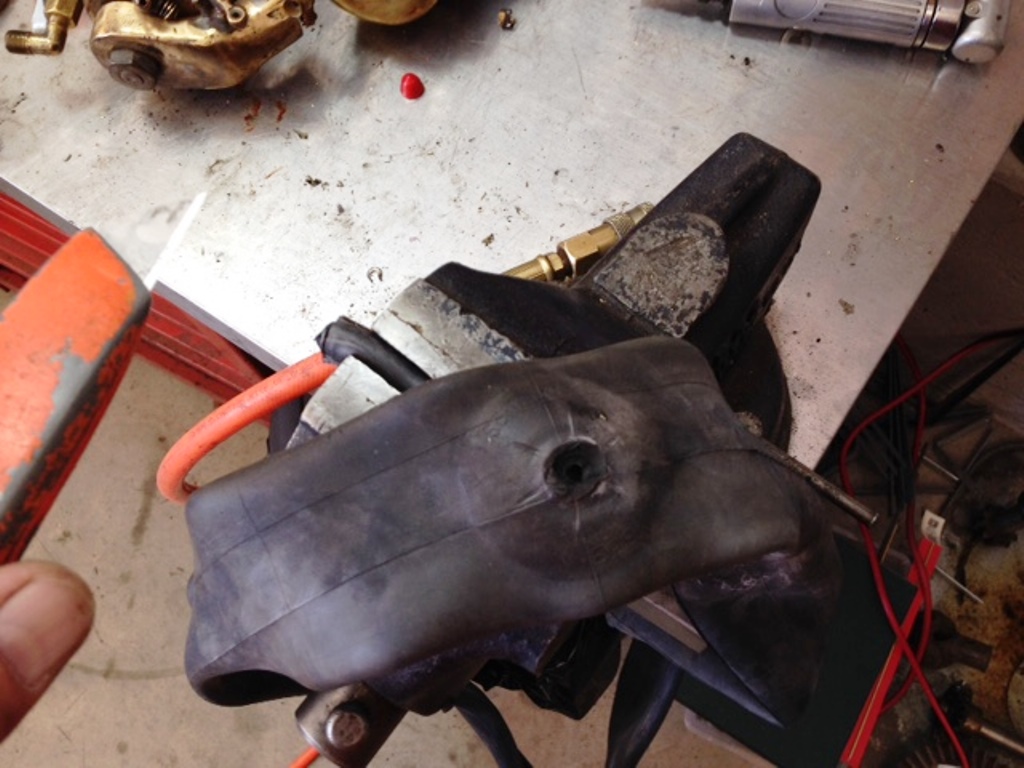 Then I used a disc sander to smooth out the cut area to allow for a good seal. 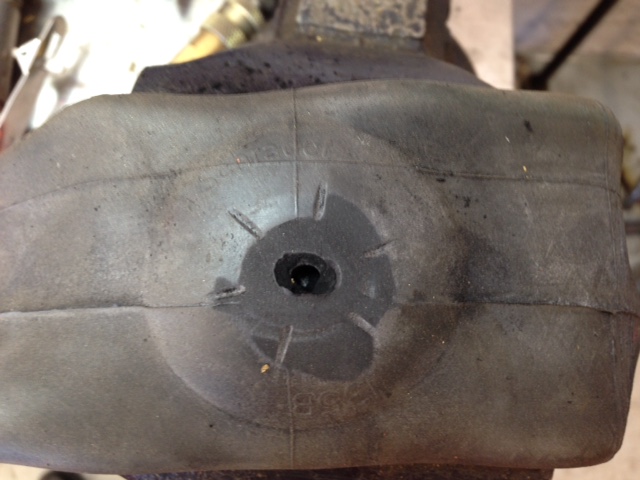 Here are the original parts that you need to do this: 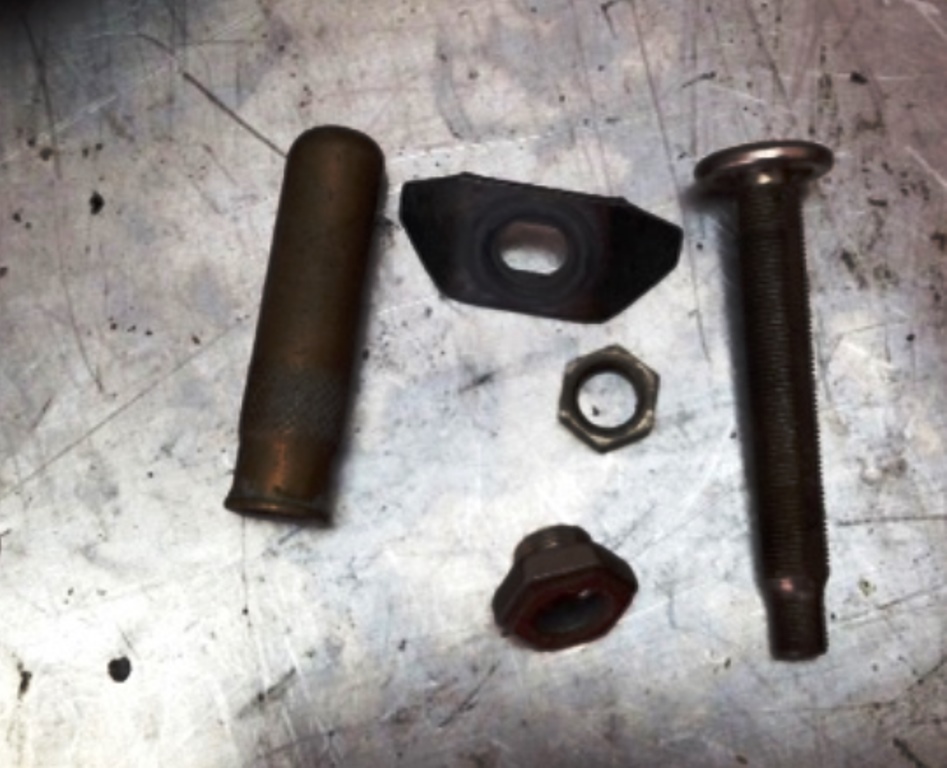 The stem is forced through the tiny hole in the tube. The rubber stem tubes are bonded / reinforced here. The thickness is about 1/4". 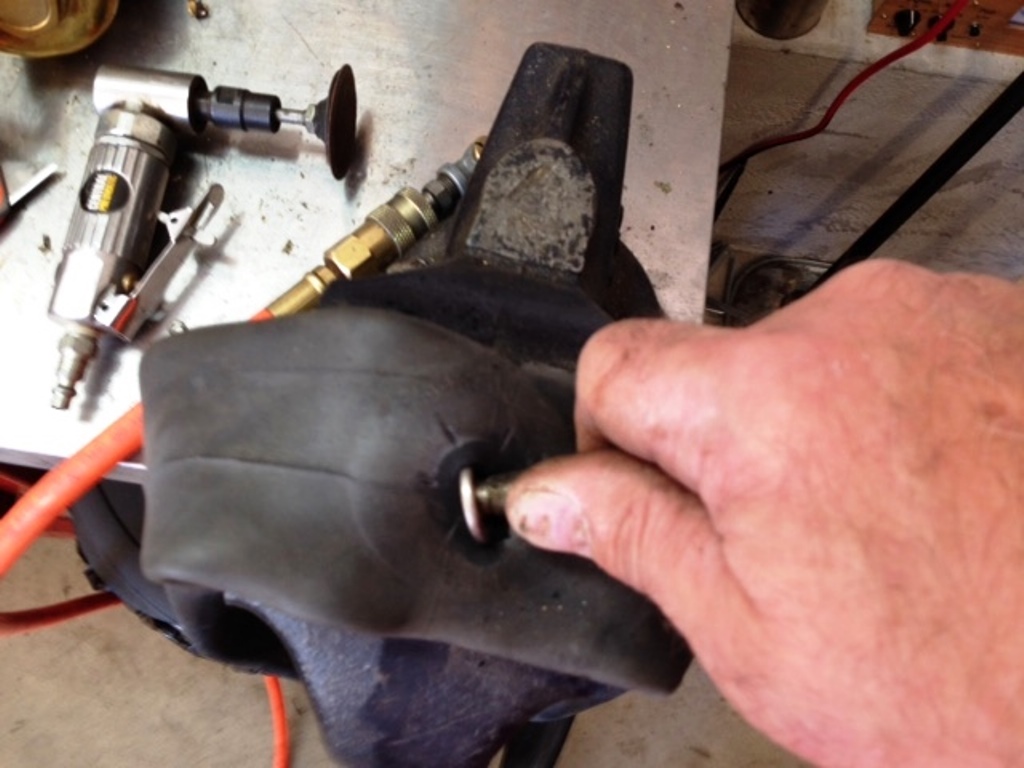 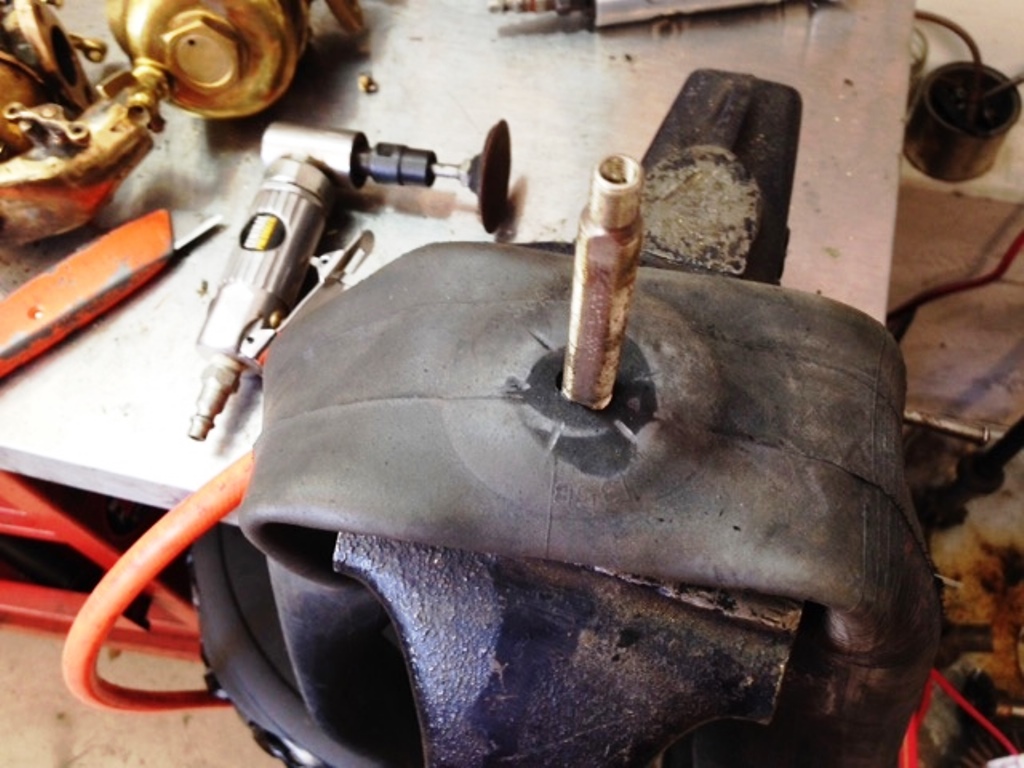 Then the bridge washer and nut are installed. The original bridge washers have a raised round lip on the bottom which makes an airtight seal when the nut is tightened. 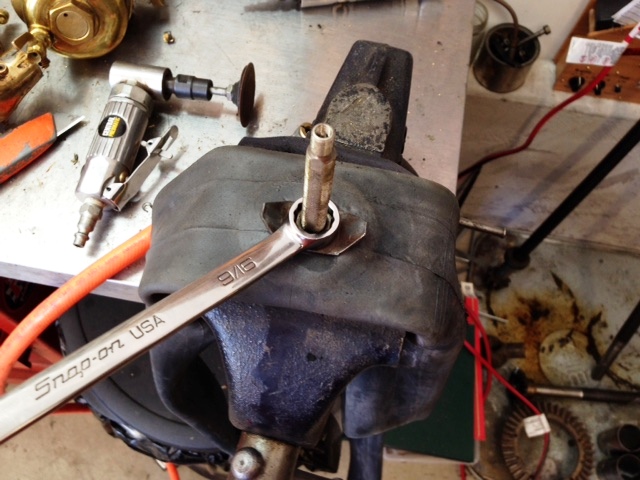 The tire is aired up to 5 PSI and then I spray soapy water on the stem. No bubbles. 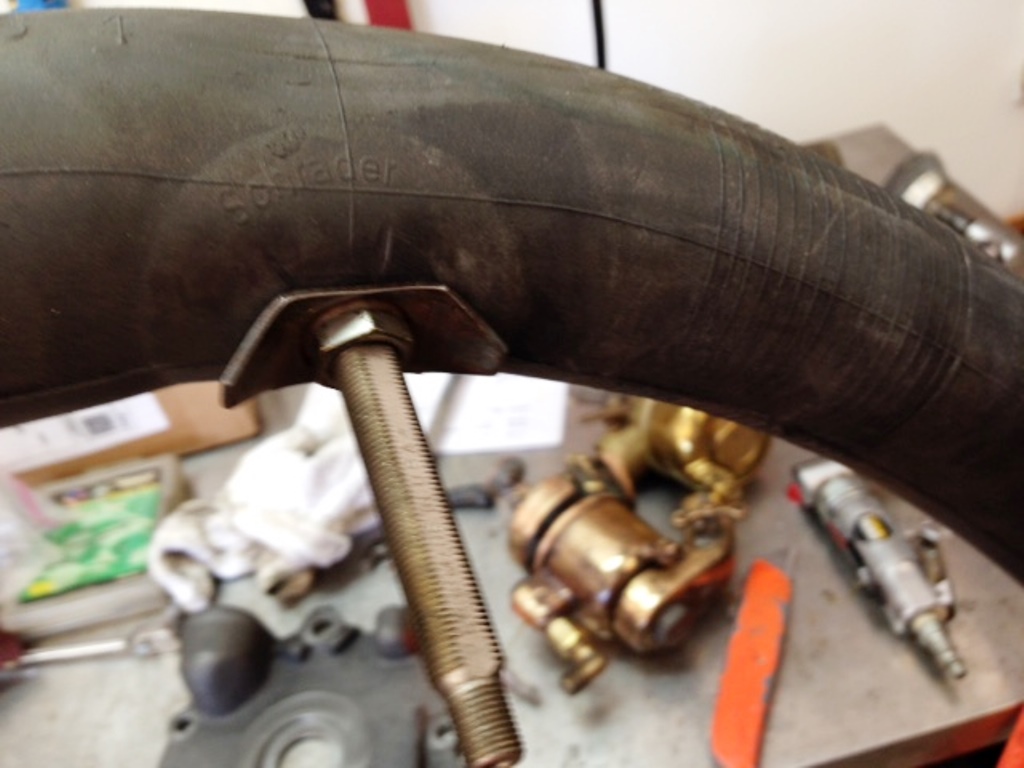 The valve stem was black with tarnish so I had to do some polishing. 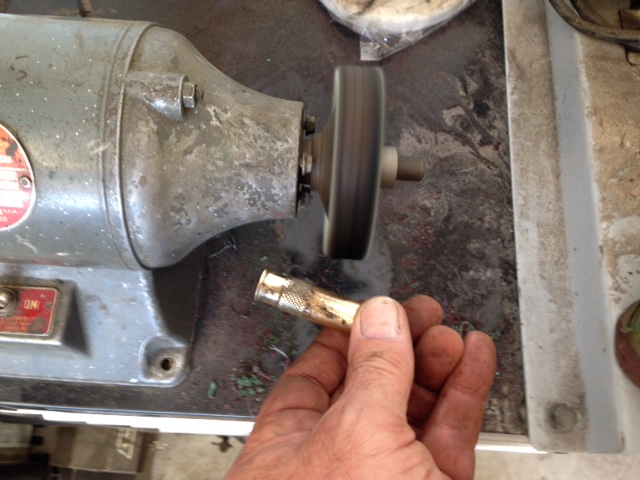 The tire is reinstalled, the outer nut and pressure cap are screwed on, and finally the dust cap with its fresh shine. 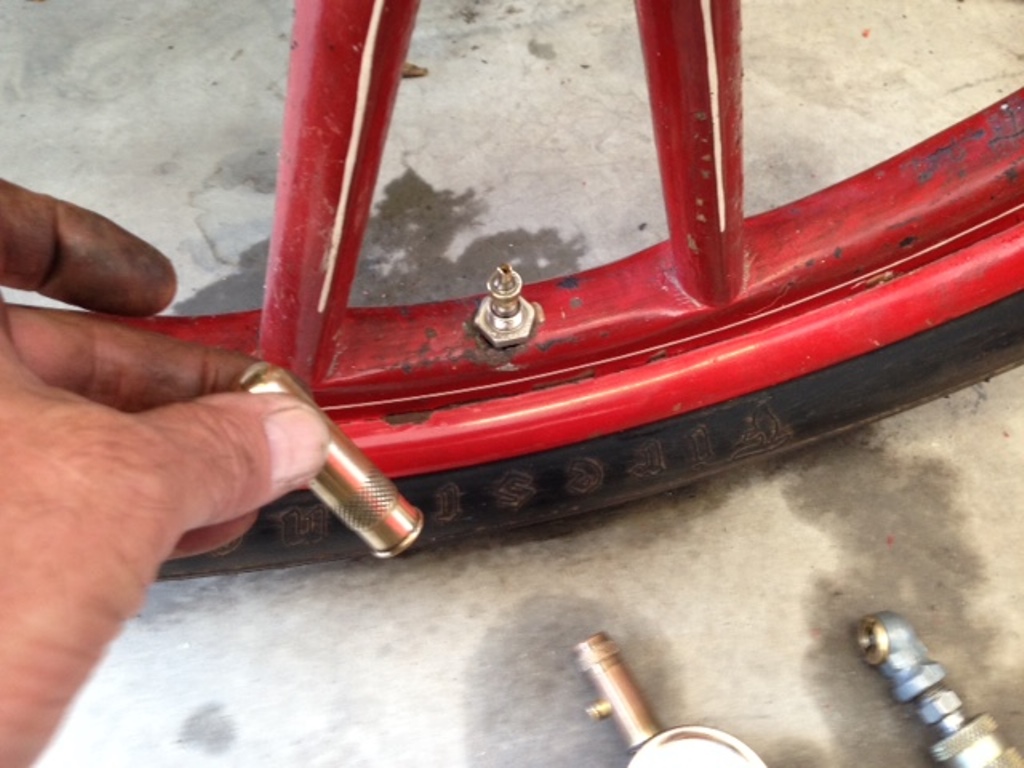 Now for that drive!

That's a great tutorial, Royce. I've been doing that on my tubes for a while now since someone posted a thread on this subject previously, and it works nicely.

Thanks for posting this helpful thread.

Royce, is the tube shown in your second photo the one you just got from Mr. Wade?

Rv I bought them about a year ago. Need to get some more, this car is going to need another to complete the set.

thank you posting this. I have always wondered how it all worked.

thank you posting this. I have always wondered how it all worked.

Thank you so much for taking the time to document and share what worked. It will help the next fellow.

Royce, How long is the original metal valve stem your using?

"...original bridge washers have a raised round lip on the bottom..."

Does that mean the new ones don't? Are the repos some of those "spurious parts" Henry warned us about?

No the new ones are of course made improperly like almost all reproduction parts. The photo below shows an original next to a Snyders repop bridge washer. 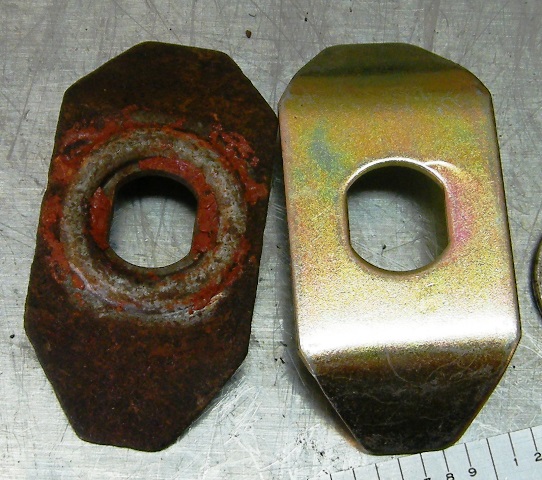 Jay the Schrader 777 size is 3" long and is the perfect Model T size. There are several other brands that are exactly the same size that were also probably original Ford equipment or period aftermarket.

The Schrader TR-26 is 2 3/4" long overall, and it also works perfectly well. You can see both of those and some unmarked ones in the photos below. 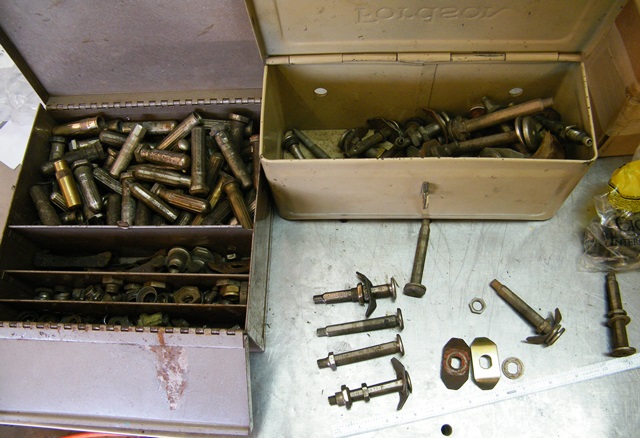 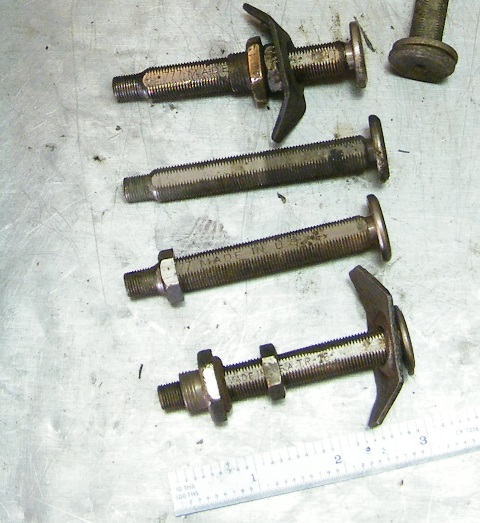 I believe you can use the flat, "non-lip" bridge washers as long as you have the correct round washer between the bridge washer and the tube. 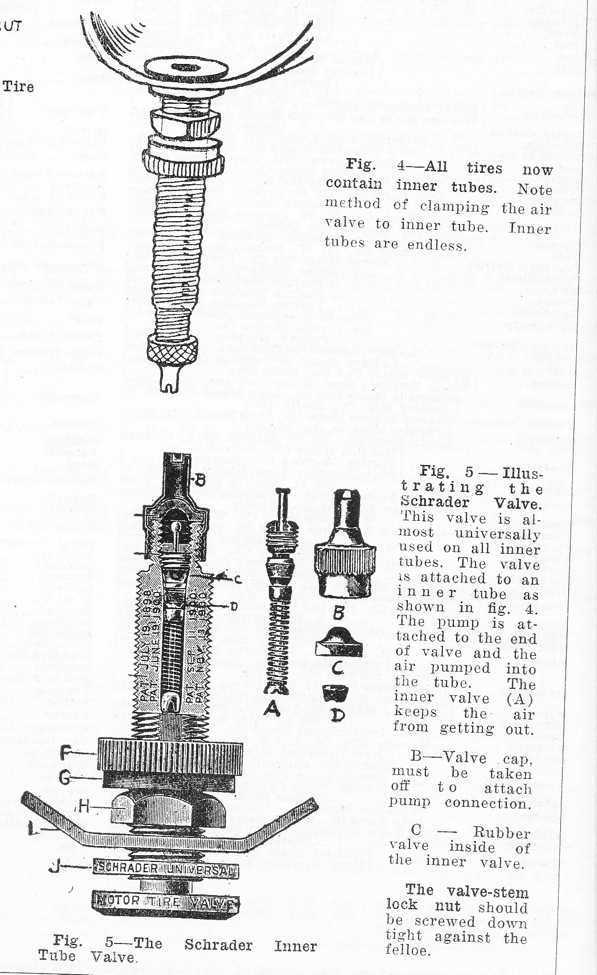 Royce: I think you should be more careful when removing the rubber stem. The picture you posted with the original stem in the tube clearly shows a gap between the stem and the tube. The tube should be snug around the stem. For your car, I think you should have the round serrated rim nuts, instead of the hex ones. You are correct on the repro bridge washers. They are useless. Next, I would not use an electric sander to smooth out the tube where the rubber stem was. I start off with a file, and get things going. Then I use a special sanding board I made from a paint stir stick, where I glued a piece of 120 to it to sand the tube. I use snap ring pliers to spread apart the tube to be able to insert the stem. I use a TR-16 stem, either Dill or Schrader, which is the shortest stem that can be used in a T wheel, and still be able to get the rim nut on after installing the tire on the wheel. The rim nut pictured above is the one I think is correct for early T's.

Royce, I have a few original valve stems but only three of the Schrader 777 which I would like to use on my 09 ford. Any chance you might spare one"
Dale

One last thought. I know you don't like flaps, and I don't either. I had three flats in a row once on a tour, and was very embarrassed by that. I installed flaps, and haven't had a flat tire since. Worth a try?

Royce,Thanks for this Thread, and thanks for the information on the stems. I have two large coffee cans full of all different size stems and now I know which ones will work for our T's.

I have never had a flat tire caused by anything other than rubber valve stems turning loose from the metal insides until now. The tubes on this car are just plain rotten. I've never had any problem with a tire running without flaps.

I regularly wear tires bald with no flats, and then re - use the tube on the new tire.

I think you are seeing a shadow in the photo, the stem was super tight in the hole. I used an air sander, not electric. The results have been flawless using my methods for many years.

Thanks for that tutorial Royce. I have a number of tubes that have the rubber stemmed valves sheared off them. They are good in all other aspects so I will fit metal stems valves to them now and be confident they will serve me well.

Thanks for this thread Royce. I've been wanting to do this for a while now and have been gathering up parts. Nice to know what to look for now, I had no idea about the bridge washers. Dave

I have a few like Eric's diagram, not many. They are earlier than the style with the stamped bridge washer which eliminated the special washer, making fewer parts needed. 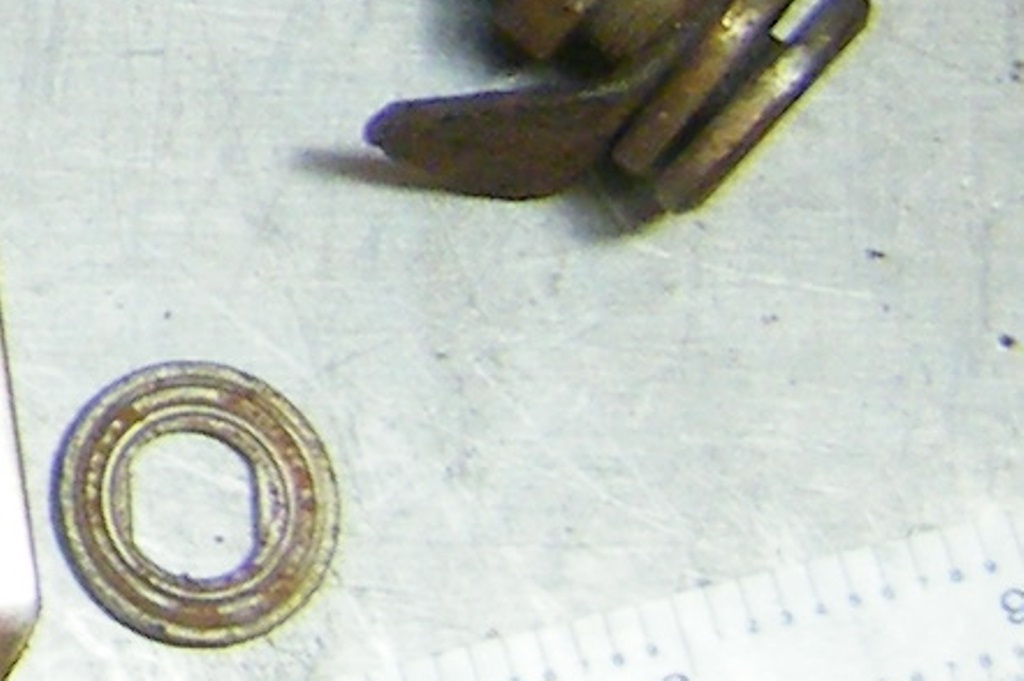