With the exception of the first photo these are of my current project and not an original car.
One problem specific to 1914 Ts and similarly to 1913s is trimming the interior panels around the firewall to body brackets. I made my brackets just like the originals thinking they were exposed as in pictures of restored cars I have seen. The tack above the bracket in this original piece tells me the panel covers the bracket and nuts. I see original photos showing that also. This means the panel is held away from the wood by the thickness of the bracket and also the nuts. I can see why some elect to cut the panel where the bracket is and trim around it and not over it. I persisted to do it as originally. This meant cutting holes in the panelboard for the nuts. Also I had to use some monster tacks to pull the panel and trim into place. Now I realize the panels were covered with material much like was used for the seats. I can put some paint on the nuts to get by. There still is a gap. 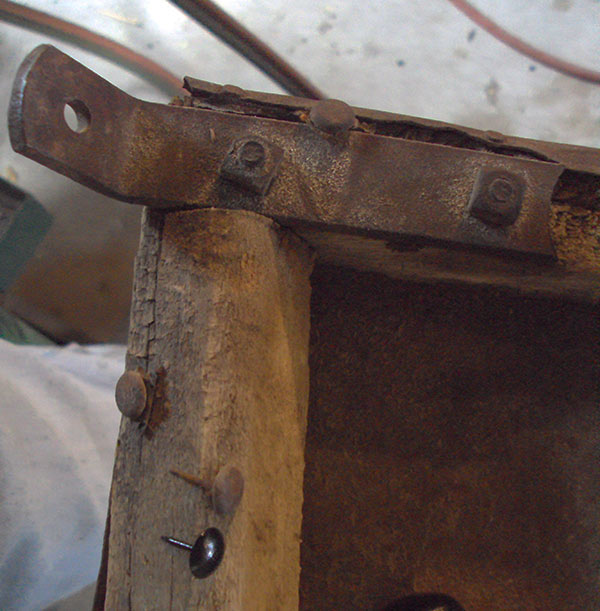 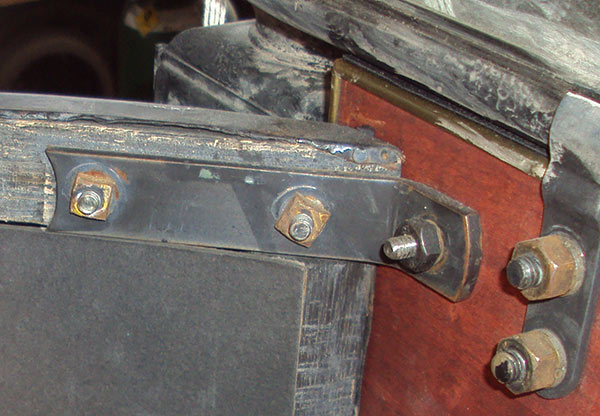 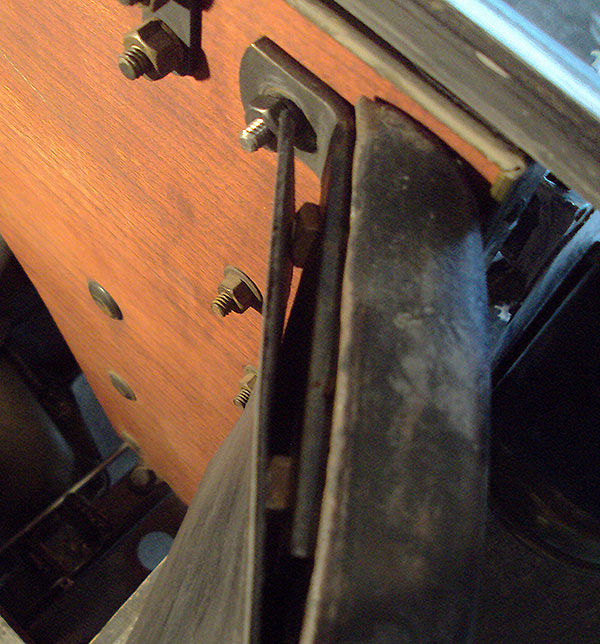 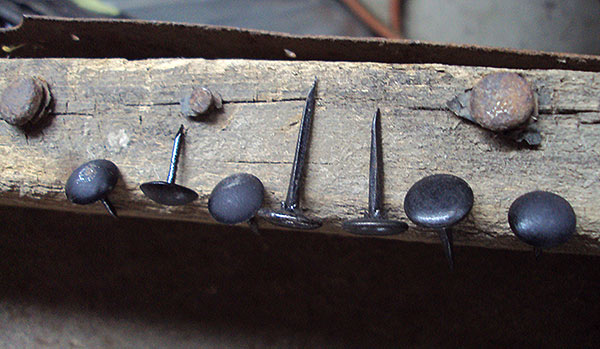 I was lucky to have some wood patterns and hardware for this area to go by. I could make an appropriate tack strip at the floor board riser and nail it in place as the original did. Even though much of this can’t be seen it is nice to make many things as they did at the factory. 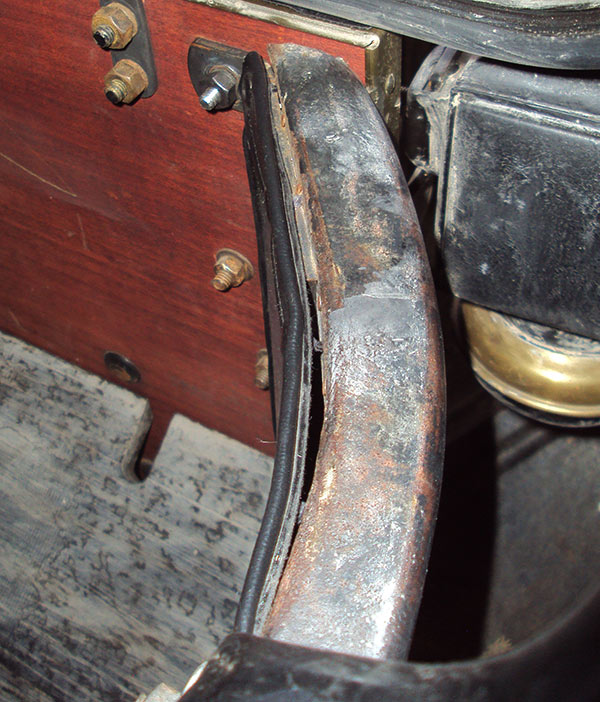 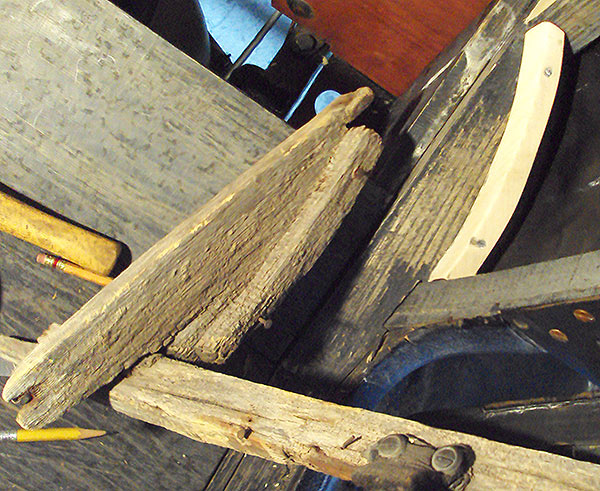 3” spacing was mentioned for tacks. I had used less than that for the seats but this worked out nicely for the panels. I made my own binding using vinyl scraps and twine. While the stitching is not correct at least it has a bead in it. Information here on the forum has made this car better in many ways than it would have been otherwise. 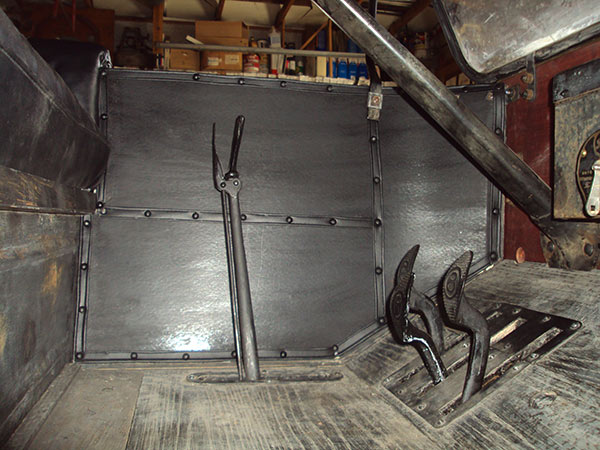 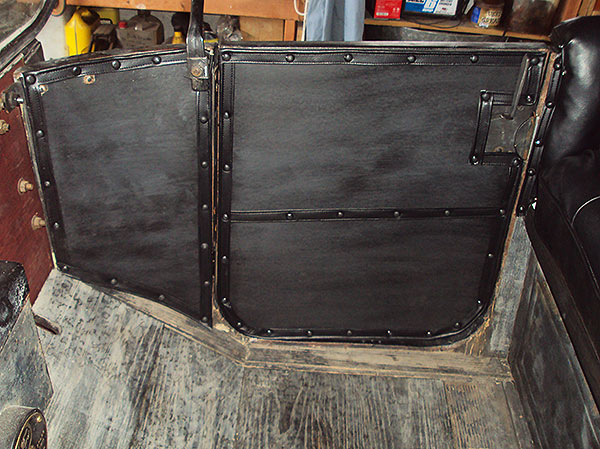 The panel work would have been much easier with the body off of the chassis. Working around the steering column and running boards was a little tougher. Having an open area where the floorboards are would be nice too. Many areas were hard to reach and see. It would be great to be ambidextrous too but I am in only one hand. [;o)
I am also lucky to have an upholstery shop for a neighbor where I could buy panel board. A craft shop next door had twine for the binding. So what I didn’t have on hand I could walk to without hunting down the car keys. This was just one more enjoyable task to do.
Rich

Did you paint the dark panel board? I'm thinking perhaps yes from your temp-up shot. Pic #2.
I sure like that look. Kind of plain. Will you distress it?
Very interesting. :-)
The driver's side is of great interest to me and your work provides inspiration and ideas for me to leave the fore section on the 18 here as is.
A black piece of tin is in place and it will stay as is and now I "get" the how to do it with the board and your trim.
Thank you Rich, your posts always provide so much detail! If we take the time/read it agains to absorb them. :-)

Hi Duey. I wasn't sure how waterproof the panel board was. I did paint it with tractor paint. I brushed gloss black all around and then worked flat back from the center and streaked it all together. After drying I scuffed it with scotch-brite. I will apply some muddy water and then rub with a rag when it has dried. This is how I treated the body and fenders. 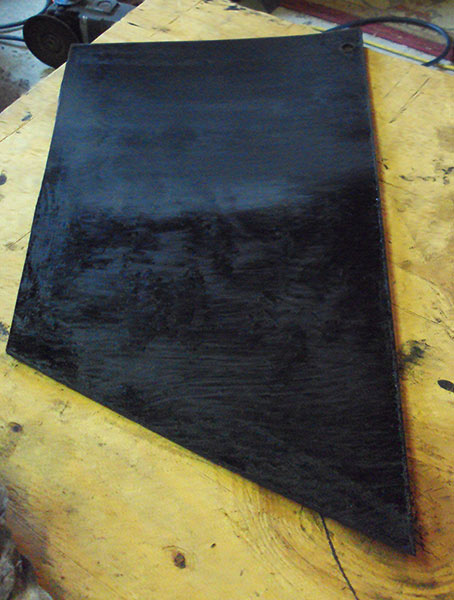 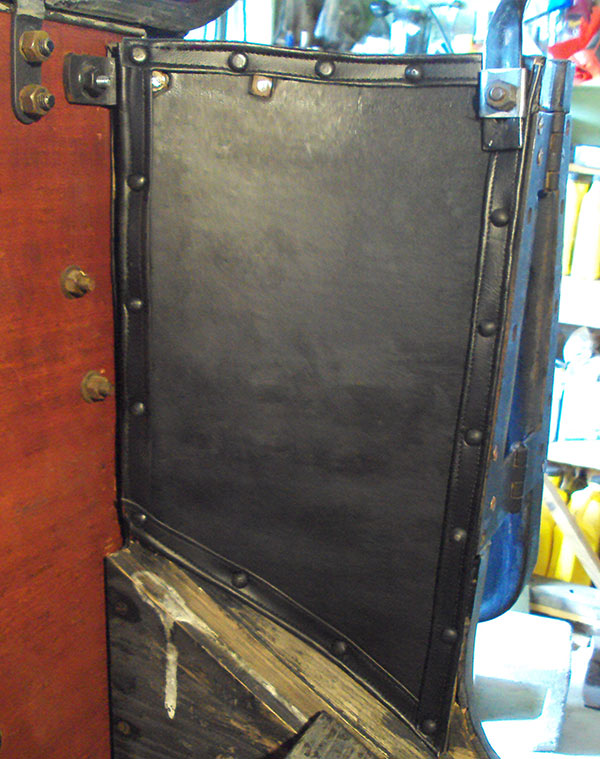 If that were my car, I would have cut the chipboard to go around the firewall bracket, and pulled the material over the bracket and nuts, and then nailed on the binding. You can buy the correct binding from Langs. The closest thing to the correct upholstery nails come from Witmer Coach shop in New Holland, Pa. They are 1/32 larger than the originals, but look a lot better than the 7/16.

I always appreciate your comments Larry.
I can see that would have been the better way to go. I discovered the fabric being used too late.
I am wondering if the tack diameter varied during the years. I used the Taiwan domed tacks as I was out of the flatter head (?) ones. My original tack from a 1914 door pillar measures .415 dia. Another found under the door check strap measures .400. Rust and compression may have had an effect on the diameter. The 60's tacks came from an old trimmer. I use them in places the shorter tacks don't hold. The heads on new tacks sometimes pop off during installation. The originals are a hair longer but don't look more sturdy to me. 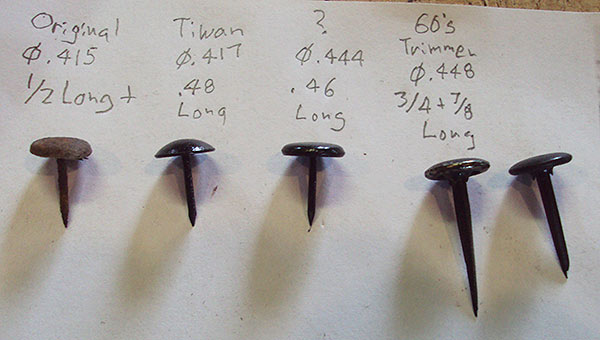 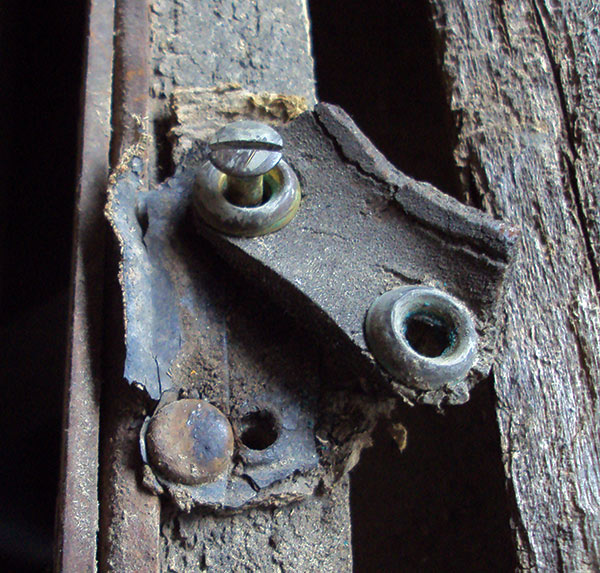 Speaking of check straps, I have identical straps mounted on 2 separate '14 pillars but in different locations. I am wondering how much latitude was given to the trimmers in regard to placement and spacing of these and tacks. 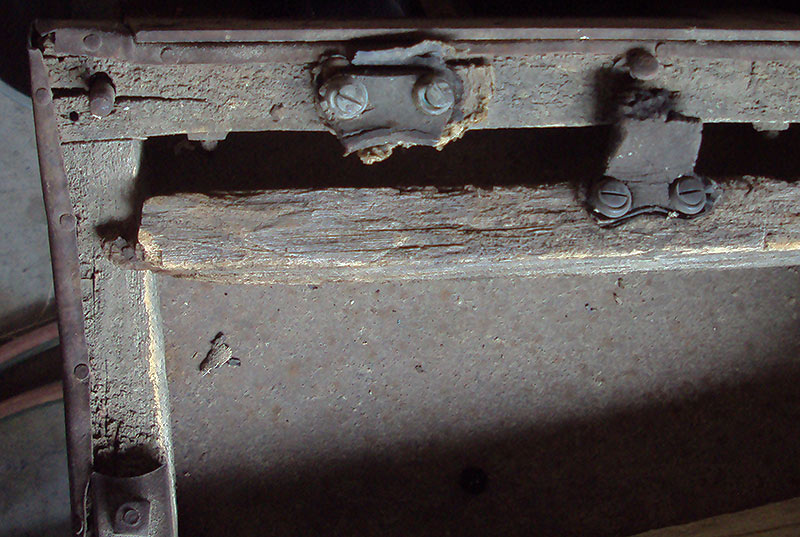 Richard-
I have some capped upholstery nails like your "'60's trimmer nails" but have a 3/8" head. The chisel tips on these don't bend like the modern junk. 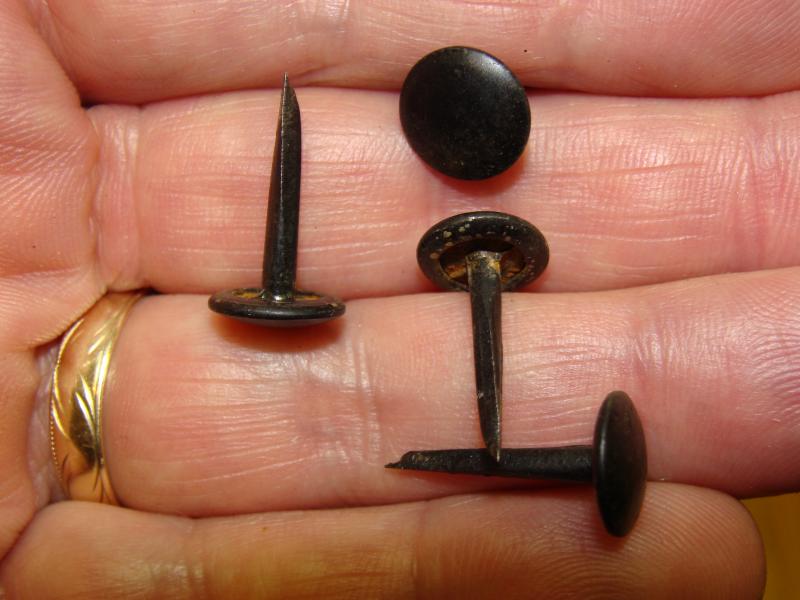 On the hinge strap, I have found generally it is centered on the hinge. 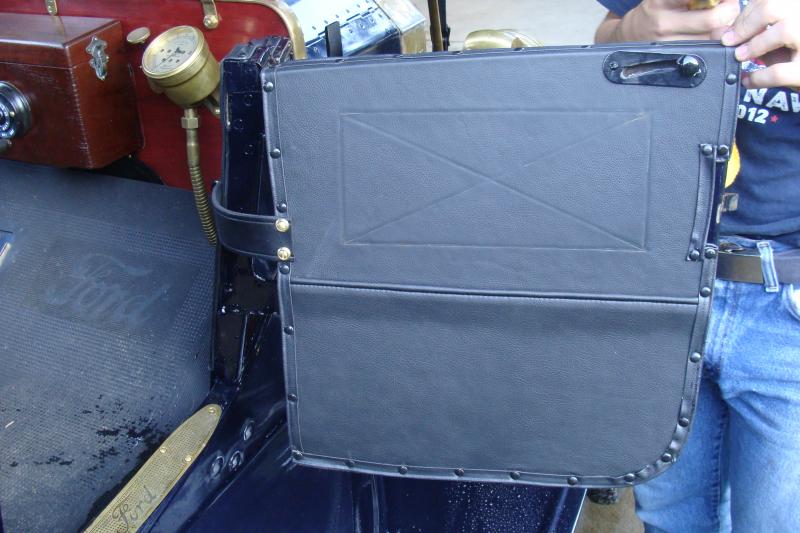 Those would be perfect Keith. I suspect those are no longer available but may still be around in obscure places. The strap looks good there. My higher example seems odd in many ways.

Today I installed the rear door panels. Like many things I do my best. Any flaws or wrinkles only add character and probably happened at the factory from time to time. 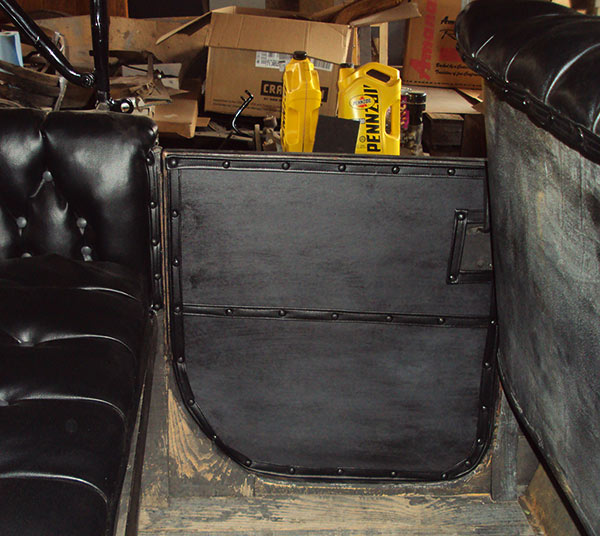 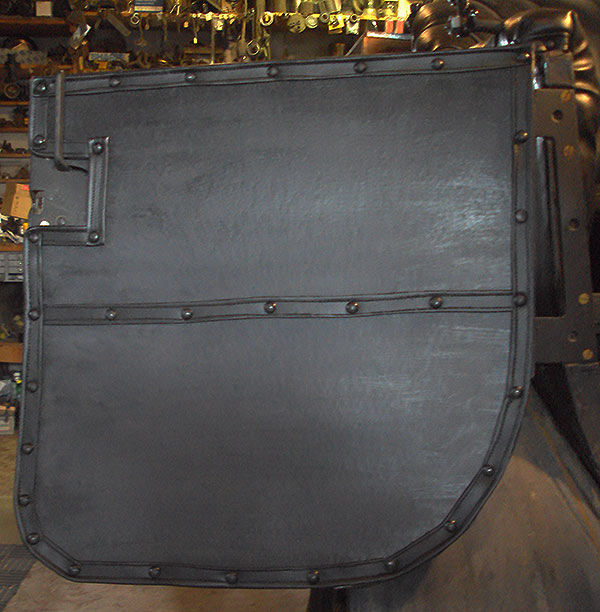 Peculiar to this car are the door latches. Rather than use hard to find '14s I put my own levers on later latches. This at least appears more correct. No doubt this may cause confusion but I am trying to document my mis-guided choices for this car. 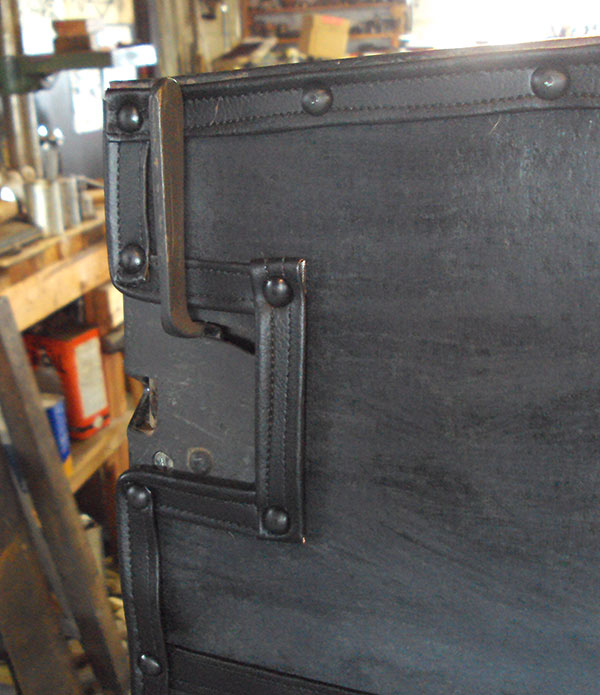 Looks good Richard. Thanks for sharing

Rich ! Always a treat to see your excellent work. Coincidentally I've been replacing missing nails on the interior panels of my '13 roadster. Since that forward brace is covered on mine, I never gave it much thought. Looks like it was done as Larry suggested - but there is no welt along the top edge. Is this right ? Does the '14 have separate garnish moldings screwed on the top of that quarter and the doors ? Is that the difference ? 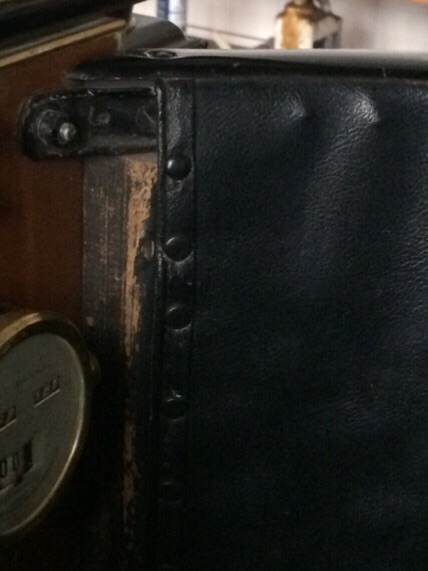 Hi Rich. I believe the 1913 sheet metal is about 1/2" after it bends over the top of the wood. That is why the separate molding. In 1914 the metal covers the top and turns down about 3/16". No molding was used. My first picture shows an original tack nearly at the firewall. These panels apparently went all the way forward which required bending around the front pillar. '13s may have done that too.
Tacking the material under the moldings makes a nice finish. I have seen it done that way and with a welting. Larry Smith would know which is correct. Yours has the correct type of welting but closer spacing than what I hear is correct.
The bracket is the typical '13 channeled as opposed to the '14 bent bar.
It seems odd that the nuts in the brackets would simply poke the material but it worked. I was going to cut and trim around them like some folks do but realized mine was not done that way. That is not to say that none ever were originally.
Rich

You should refer to that wonderful photo that Royce posted years ago of a new '14 interior showing very clearly that you did you interior panels wrong!

Can you link me to that photo Larry? I have a little trouble finding the info I needed in my searches.
Thanks
Rich

Hey Eagle great job but my question is when you said " any flaws or wrinkles only add character and probably happened at the factory from time to time" Are you talking about the wrinkled panel or installer?

Denny, now that you brought it up, I do have may flaws and wrinkles but they probably don't add to my character. I am lucky to be doing these things.
I post these photos in hopes others will share what they are doing with their T's. As Larry points out there are many things done wrong and this is not a guide of how to do it but perhaps a search of what is correct. There is good information out there but difficult to find for some of us. I have looked at hundreds of photos and have a few original patterns. I have mentioned before that this car is not a show piece but a fun car with as many correct features as doable with what I have at hand. Like Rich Bingham's axle stand it is making use of otherwise discarded items.
Thanks
Rich 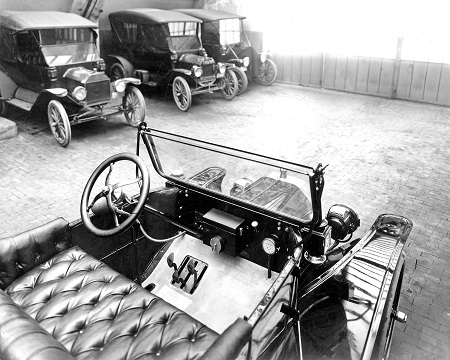 Thanks for finding that Larry.

Yes, Larry, thanks for posting this picture again. I love seeing it, wish I had a way to print a large copy of it. Alas, we can't see very well the detail of the forward kick panels being discussed. I never noticed before that the photo makes it look as if the top of the door is quite dented ?

Maybe this thread is a better place to note as Rich did, the search for authenticating small details? On a thread about the loop buckles it was noted that rear top straps fastened through a round "cinch ring" on earlier cars with leather straps, and that was changed to - "D" ring later when leather was replaced with a fabric webbing - also, that where leather straps were riveted, a tubular rivet was used - I'd like to know what's correct mostly for my own satisfaction. These small things are the easiest to change and get right. I hope Rich won't feel I'm hijacking this thread - 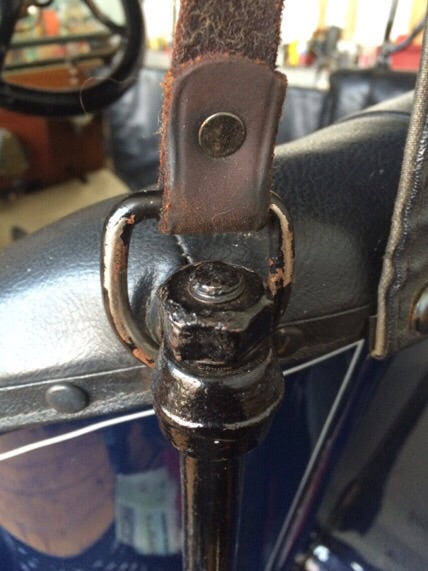 Wrong kind of ring and rivet ? 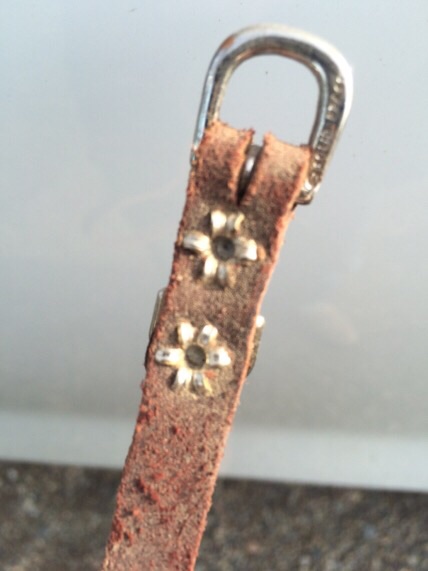 Larry the detail in that photo is fantastic!

Confusing myself - I replied to the "more on loop buckles" thread instead of this one. Like as not it's better so.

After installing the door check straps I feel this captures the essence shown in this black and white photo. It appeared in the Vintage Ford in Nov-Dec 1983 page 25. 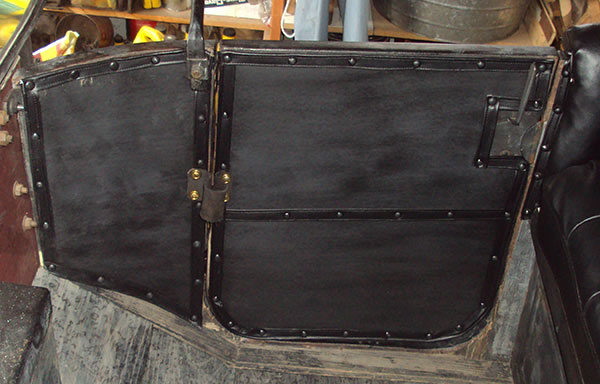 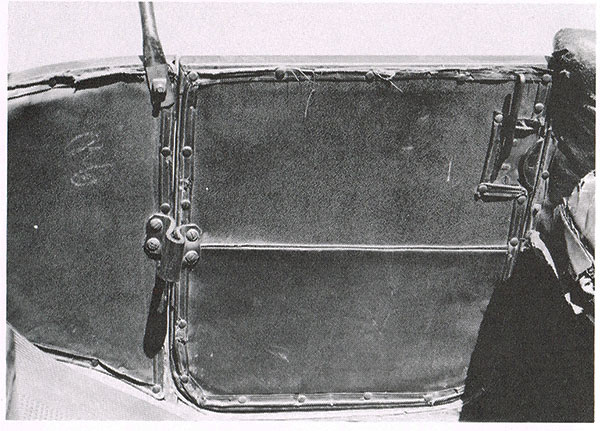 I used #10 x 1" long brass oval head slotted screws as the originals. The caption with the photo says "Typically, all upholstery jobs were not identical. Note the strip nailed across the door in another (later) 1914 touring."
I found this interesting as we had discussed that earlier.
Rich

Richard-
Did you use the finishing washer with the brass oval head screw?
-Keith

Yes, the cup washers and screws aren't as photogenic as I would like.
Thanks for mentioning them.
Rich 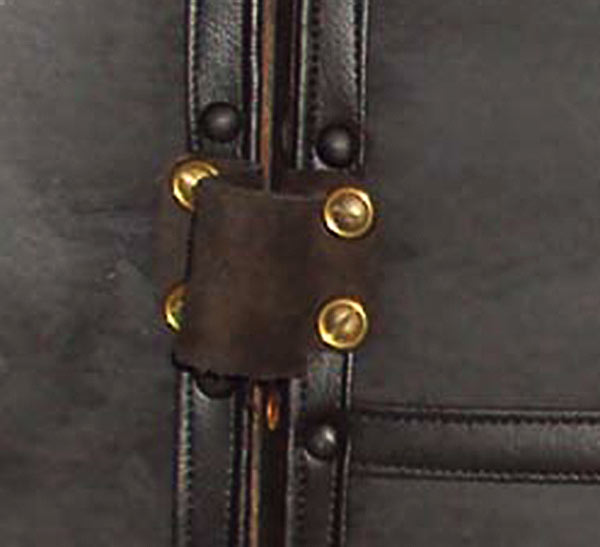 The photo Richard posted above on the right is the way Ford upholstered over the front top firewall bracket. Usually, but not always Ford mounted the check strap over the center welting on the door as pictured.