I'm a T owner again..I sold my last one and regretted it ever since but now I have another. She is a 1917 Roadster and hasn't been on the road in years, so I'm diving under the hood and seeing what it takes to get her back on the road. One question I have, should I get the "Horseless Carriage plate or try and keep the 60's black plate? Comments are welcome.. first thing I notice two coils are not sending spark to the plugs, any good coil repair persons out there? 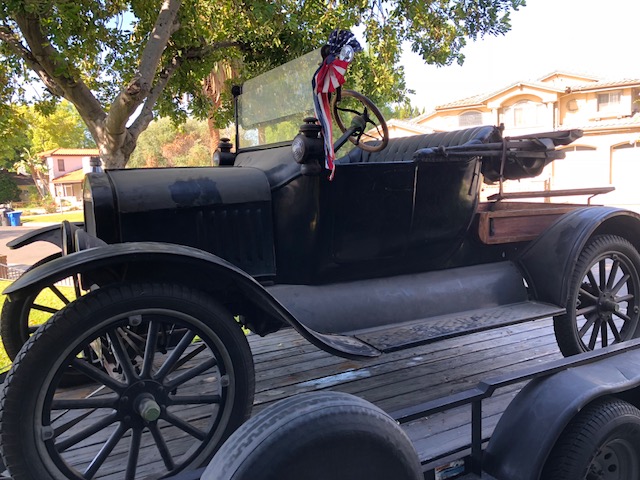 I would try to use the black plate.

These are the go-to guys for coils:

I did a yom in california, nothing to it.

If it isn't still registered to the black plate, then it won't be a YOM. 1917 is a white plate with poppy (I believe) riveted. Very expensive to find. You can get California issued new Horseless Carriage plates for a low cost for vehicles through 1922. Not the same rules as HCCA. Black plates would be Year of Manufacture for 1963-1969.

I do agree with Dan. If they will let you use the black plates, go for it. We have black plates on our '24 Studebaker & they show that it has been around for a long time

There may be a provision in the law that will still allow the black plates if you have old registration documenting them to your specific car. You can also now order new black plates for any year car if all else fails.

John,
I would suggest Year of Manufacture (YOM), or other 'regular' plates for one reason: "Full Operating Privileges".
Horseless Carriage and Historic Vehicle registrations in CA come with restrictions that may or may not be enforced by a zealous officer of the law.
Best regards.

Whatever plates you get, carry a copy of the law in the vehicle. I was once stopped by a highway patrol officer who thought my YOM plates were illegal. He was on his radio for about twenty minutes while somebody taught him the law.

A license plate story. My 51 Merc. convert. came from California. I have sets of 51 YOM for California and NY. When I finished restoring the Merc. I registered it with the NY plates. I like the looks of the Calif. black plates better,so for the first month or so I just put them on it. I was taking a trip to Long Lake with it so I thought maybe I should put the right plates on it. Turns out the gas gauge wasn't accurate and we ran out of gas about five miles from Long Lake. Along came the NY State Police, they stopped and of course noticed the YOM NY plates. Both were young guys and had never heard of the program. The fact that the windshield sticker matched them really puzzled them and they invited me to get in the back of their car. After calling it in having the program explained to them, they couldn't be nicer. They took us to Long Lake to get gas and brought us back, staying to make sure we got the Merc running. Good thing I had changed out the Califonia plates.

So Florida shares New York's absurd prohibition on restored YOM plates. How do they know whether a plate is restored or a well-preserved original? If it's properly restored you can't tell the difference.

As mentioned earlier H C plates come with the restriction that you can only drive to and from events. Most cops probably won’t say anything but if there was a accident they will want to know. I use YOM plates on my T and A.

If you decide to register YOM or Horseless Cariage, don't give up the black plate to the DMV. My 27 Tudor had the original black plate and was still registered with it. I also had the original 56 yellow plates that were previously registered to the car. I found a set of 27 mint YOM's at a swap meet. He wanted $300. I was able to trade the 56 yellow plate for $200 credit on the YOM and $100 on the Black plate making the YOM plates free.
The DMV wanted me to turn in the Black plate when I applied for the YOM. I simply told them that I was going to use them on another car. FOR YOM its DMV form 352. When you buy YOM's you have to get a release from the previous owner of the plates and the number must be DMV clear. The plate dealer guaranteed them to be clear or complete refund within 90 days of purchase.

I would keep the black plates on it. To me, that shows that this 46 year old car was still being registered and driven when the plates were issued in 1963. Another possibility is that the car was fixed-up or restored sometime between 1963 and 1969/70 when the Cal. plates went to blue. Either way, it shows some history of the car.

What can I say Steve Florida seems to attract a disproportionate number of snowbirds from N.Y. and they bring their ideas about taxation and government with them.Example in N.Ft.Myers they decided that all water no matter it's source belonged to the State and now they charge my mother a yearly fee for her shallow well that she dug 40 years ago.