The radiator on my 24 T has been leaking sense I was a kid, probably as long as dad had it too. It’s gotten so bad you have to stop about every 30 minutes and add water which can be very tricky when hot. Well I thought it wax time to address this problem now that she’s running good and share with others what I did. First let me say I am in the process of getting a replacement so I didn’t hold back and just went at it. I don’t know how long the repairs will last but I felt I had to try.

Most of what I want to share is in pictures I think they say more than I can. I’m a believer JB weld and when done properly I’ve had it last for many years. In all the JB repairs I do I make sure the area to be glued is taken down to metal, roughed up, cleaned thoroughly with Acetone, and pre-heated with a heat gun. After JB is applied I post heat with a heat gun to get it to flow into the repair and have a smooth appearance. I also let it sit for 24 hours before I do any sanding or manipulations.

This is what I started with: many vertical seams on the tubes leaking, top spout 90% broken off, side supports broken off at the top, something rattling around inside 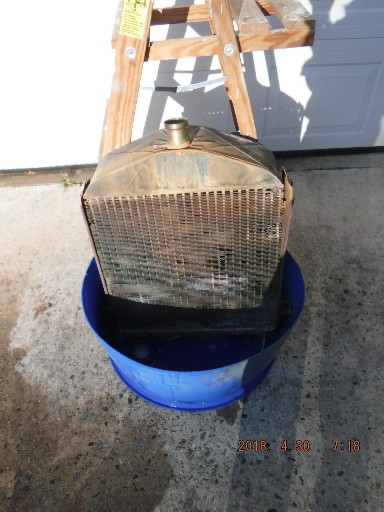 I cleaned let it soak in CPR hoping it wouldn't dissolve 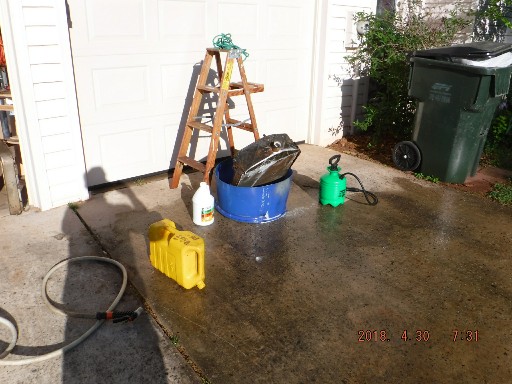 I wound up cutting a hole in the top to get at the rattle. This is what I found 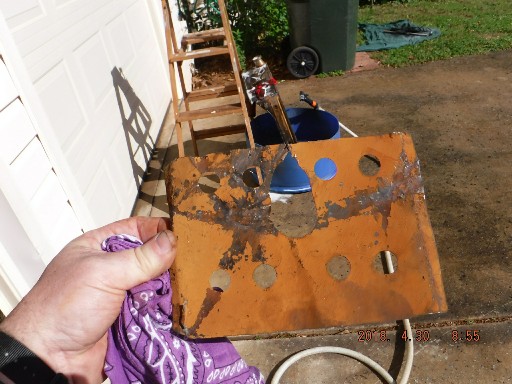 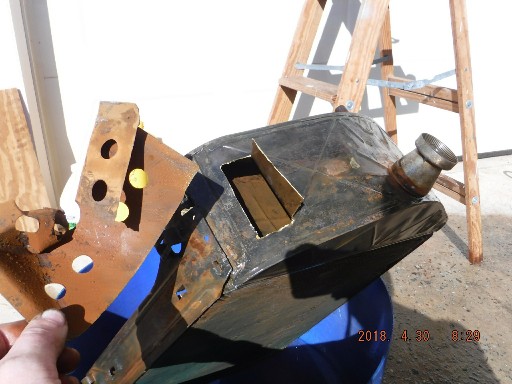 This how I repaired the hole I cut. I used a piece of brass I had cut just a bit bigger than the hole. I secured it inside the hole with stainless steel screws the JB welded it. 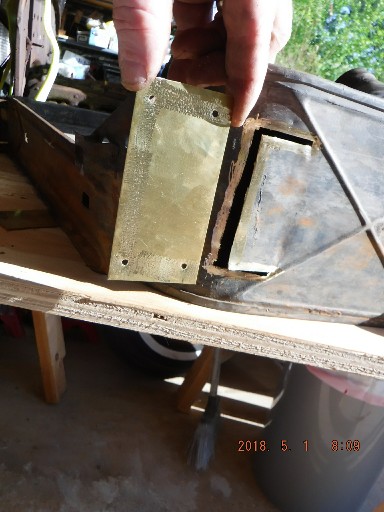 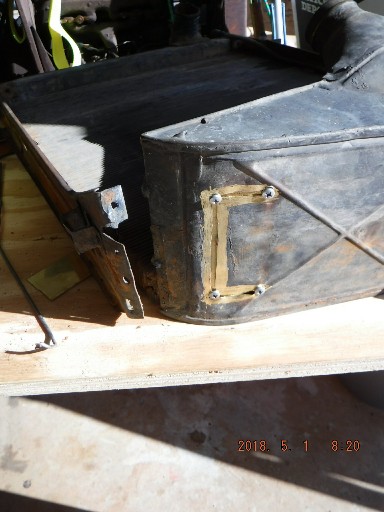 I also growing down the areas I wanted to glue on the side supports. The JB welded those. 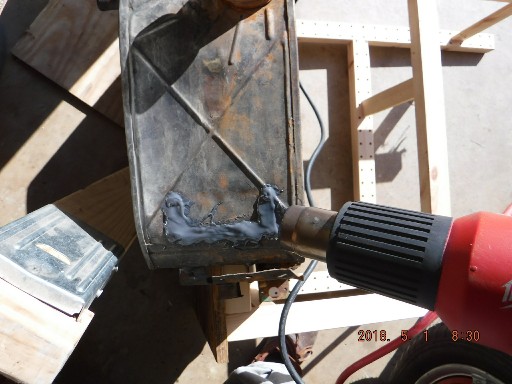 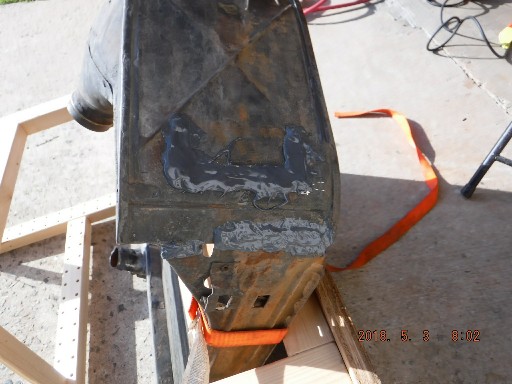 I repaired the top spout the same way 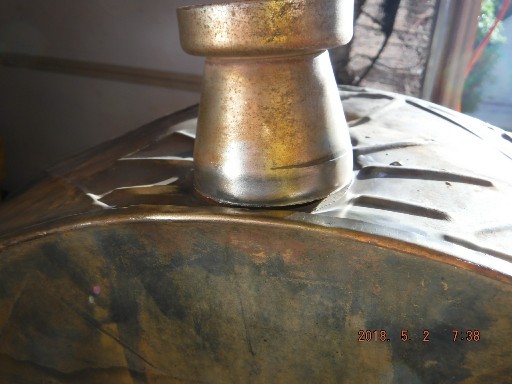 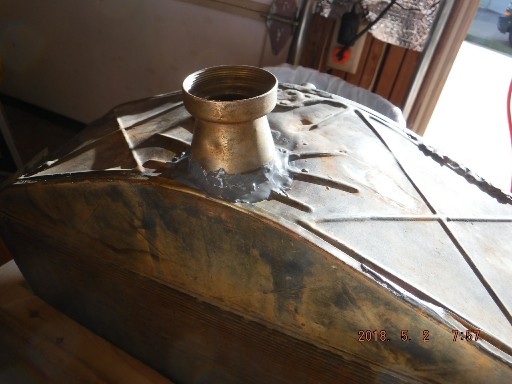 Did the baffle plate get completely rusted through at that point? You could simply solder a patch plate over the opening and I think you'd be good.

I rebuilt a 1934 Ford truck radiator once....cleaned it in our bathtub! Never thought I'd hear the end of that one.....

Anyway, I unsoldered the top tank and rodded the whole thing with a straight piece of coat hanger wire, and it was amazing how much garbage came out. Various leaks were repaired with a soldering copper (heated iron), the tank reinstalled and suddenly it held water again!

One thing I learned is that "rotten metal" (as the old radiator boys called it) simply won't hold. I had to add a piece of sheet brass to overlap some of the bad spots in the tank.

The bottom connection of the radiator was so pitted with rust I decided to fix the too. Took it down to steel cleaning out the pits with a small die grinder. 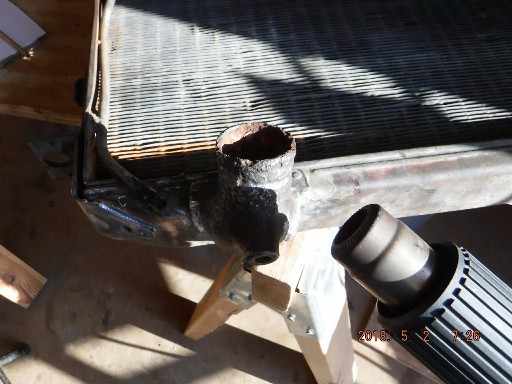 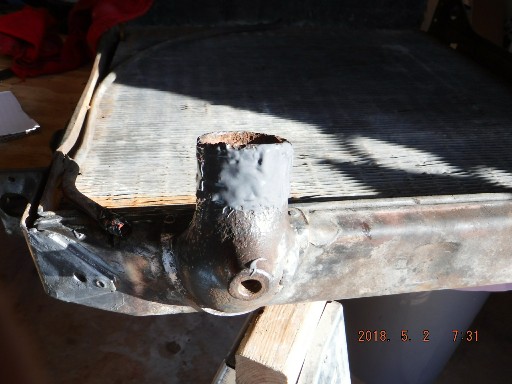 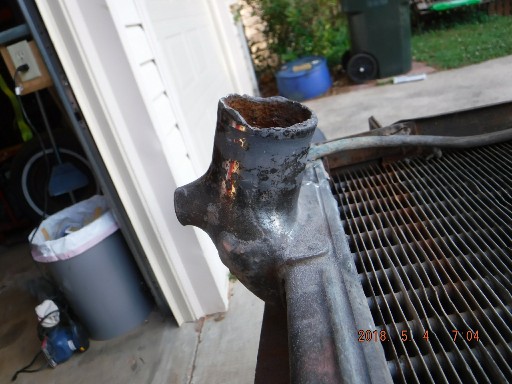 James, the rest of your pictures hadn't appeared before I posted. You don't need any advice.....the repairs look good!

I did the same to the indeed and the outfeed on the engine. 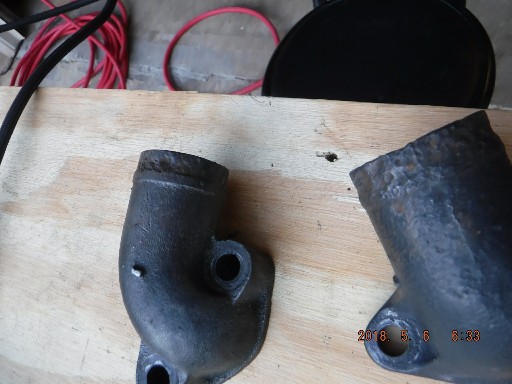 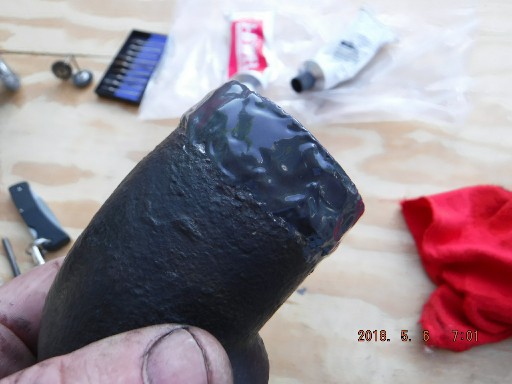 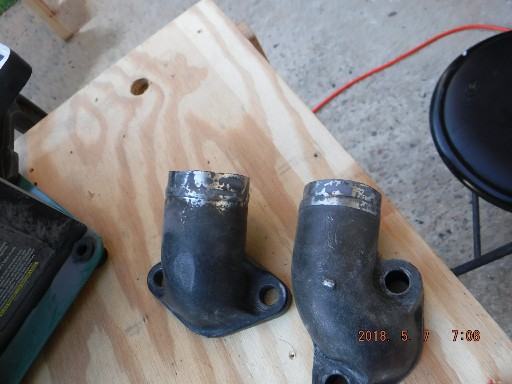 I did the same to all the leaking vertical tube I could get to. 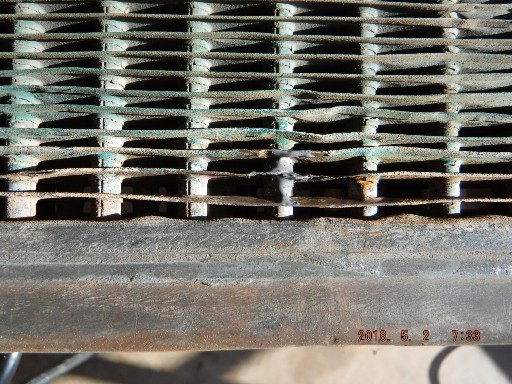 Does it work? If it cools the surgery scars don't matter. It's hidden under a shell.

In the end I stopped 95% of the leaks with the JB. I ended up adding some powdered aluminum to the water and stopped the rest. Right now she is not leaking. Tomorrow I'll take her on a rough run and see what happens. 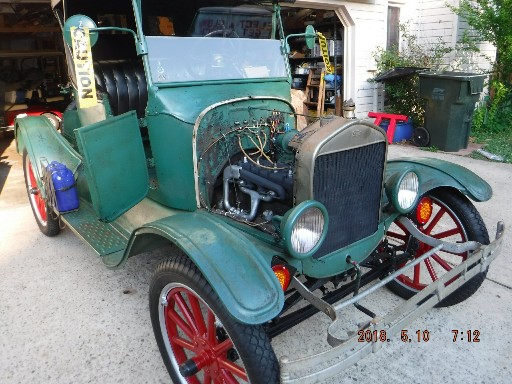 I have a tired, stock radiator on my roadster that had developed pinholes in the upper inlet.

I cleaned it up as best I could and gave it a nice, even coat of JB Weld.

JB Weld is self-leveling; I did it in the sunshine to help it along.

Then I gave the outlet a coat with 99 cent spray paint.

It held up for a few years but has started to weep again. I may give it another treatment. 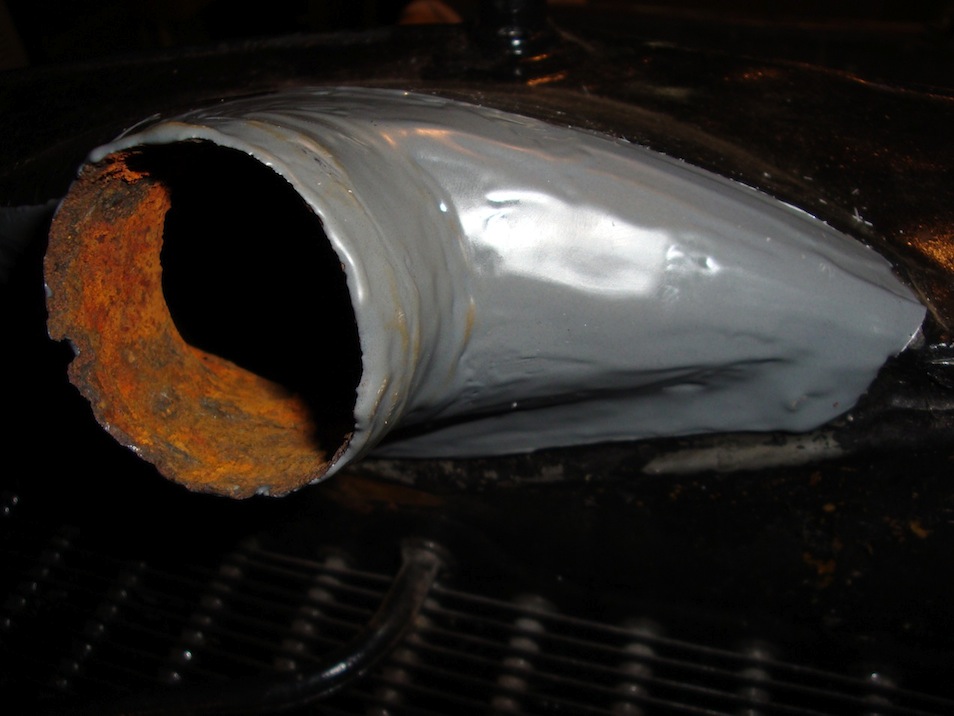 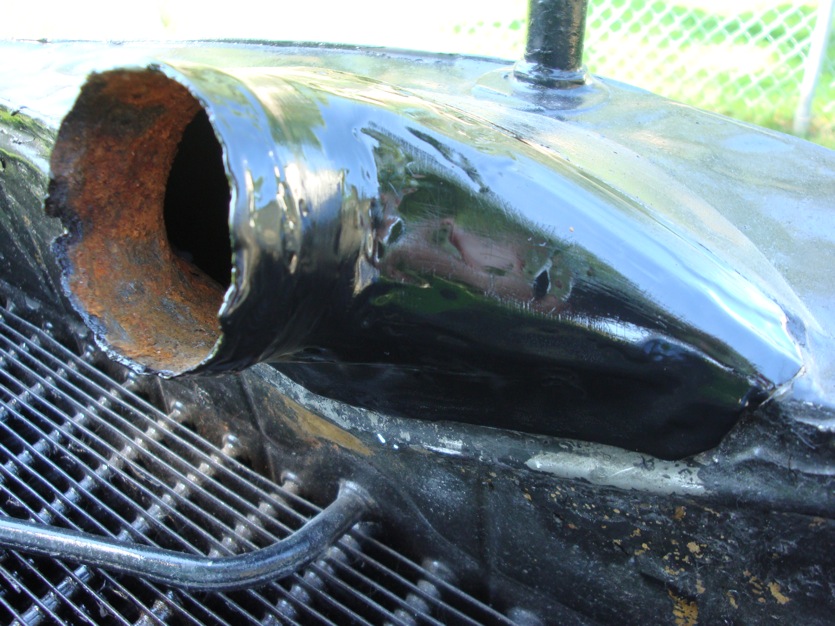 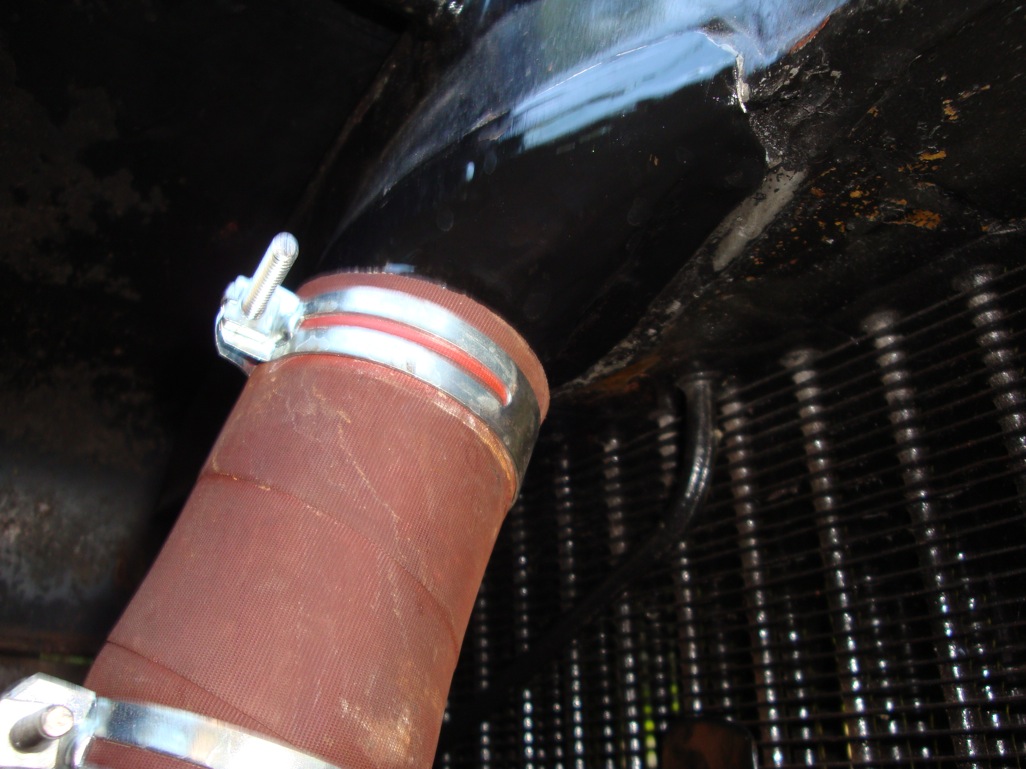 I hope it works. I used JB on some spots I didn't want to heat for solder for fear it would weaken adjacent seams. Best of luck and thanks for sharing your technique.
Rich

Keep us posted on how this repair holds up. I have a couple radiators I thought I should scrap, but now maybe they can be saved.

J B Weld can do some amazing things. When it is a choice of scrapping it? Or patching with a big tube of J B W, I will try to save an original piece.
Honey comb type radiators can be really tricky to solder. People have been known to chase a small leak all the way from the middle clear to the top, jump over to the next row and go all the way down to the bottom (or the other direction?). Often a small folded piece of brass J B Welded will do a fine repair and much less damage to the rest of the core. I have also had a couple cellular type radiators that someone in years past had poked with maybe an ice pick, putting a hole somewhat inside the core. A wad of paper on the back side, a small amount of JB to just cover the hole, allow to set. Then fill the honey comb to just below the front surface for strength. No blockage of water pathways. Such a minor blockage of air flow, no harm. Barely shows from the front with a very close look. How can you beat all that?

Now, ALL of this is pointless if a radiator will not cool adequately once patched. The silly thing is, that how nice a radiator looks has little to do with how well it cools. One of the best cooling original radiators I ever had? Was pretty darn ugly. It had two large gouges down low, complete with a couple pinched off tubes in one. The smaller gouge was about the size of a silver dollar. It was slightly twisted, and had numerous damaged fins. But it cooled fine
I ran it on at least three different cars, using it when first put together until I got a nicer one for the car. It went on and completed several endurance runs, never having overheating issues. Eventually, I let it go when I sold a car cheap. I told the fellow that if he didn't like the look of it and planned to replace it? I would like to buy the radiator back. But he never called back about it.
On the other hand, I have also seen several beautiful looking radiators that wouldn't cool at all well even after a couple good cleanings. Thermal conductivity is not dependent on beauty.
I do feel that there should be a fairly easy fix for radiators that just can't cool. There are a few things I have wanted to try. But sadly I have not had the time or money to spare for that.

Erik, maybe you could put some small pieces of fiberglass cloth, like 4 or 6 oz cloth in there between layers when you re-do it. I have used 6 oz cloth with POR 15 and done some body repairs that have lasted years..

This may not be relevant, but I discovered that most fiberglass repairs are twice as strong when using marine epoxy INSTEAD of ordinary fiberglass resin. Just mix and brush it on the surface, place the cloth and brush/saturate the cloth. Give it 24 hours to cure and it's permanent.

I had to laminate several sections of plywood to replace an entire transom and used marine epoxy. It ended up as one bonded piece of wood, easily capable of handling the biggest outboard motors.

Point is, if using fiberglass cloth try the epoxy instead. It will provide bonding and strength that is superior.

I put the radiator through a few runs uphill as much as possible making sure she got good and hot. It held water fine. It's been holding water for a week now dripping only 1/2 a cup in that time.

My ( new to me ) Radiator arrived this week and it's beautiful. I'll leak test it and clean it up next week but I'm going to hold off installing it to see how long the JB weld hold. Examining the recently arrived radiator I noticed the overflow pipe comes up into the spout. On the one on my T it's flush with the other tubes. Looking close I can see where it broke off. See photos.

So using a piece of old copper tube and more JB weld I added an extension to bring it up into the spout. After running it this morning it's holding ok and no leaks. I think the dripping I was seeing was the broken overflow tube dripping. 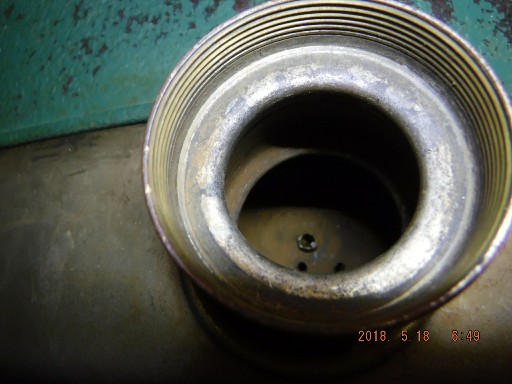 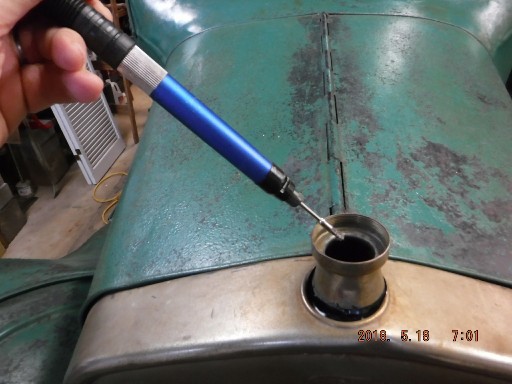 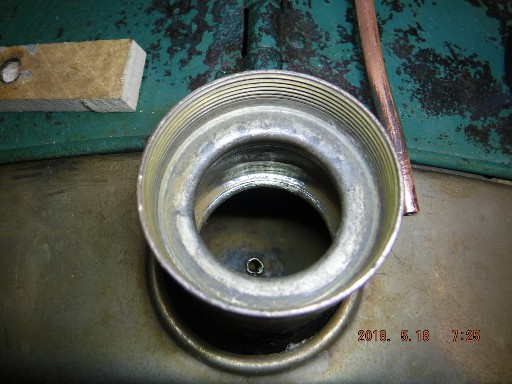 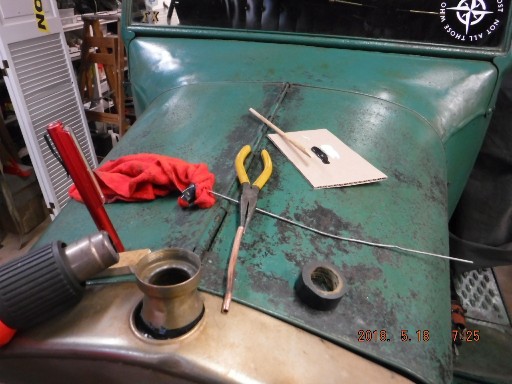 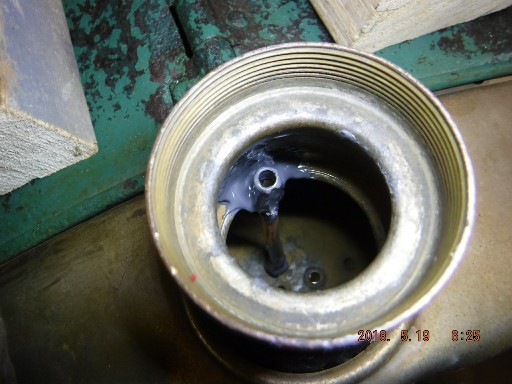 Now that last fix I'm interested to see how long it lasts.
Interesting thread James! I like! I did similar things 20 years ago on Lizzhe's rad and oil pan with acrylic latex caulk and silicone.
I J-B welded a break on the rusty/dirty exhaust manifold at the flange on the Waukesha XA in my 29 IH speedster.
15-20 years later, I found that it had cracked. Darn it. :-)