I know every car likes a slightly different starting procedure. However, I think mine is possessed by a gasoline demon...but only when trying to restart after about 10 minutes. It a real pain in the butt at gas stations and such so I just let the old gal idle...unless I'm actually filling up.

The car starts fine when cold but when restarting after a short break, it just doesn't want to start. I've tried less gas, more gas, priming, not priming, choke, no choke. About the only sure fire thing is to flood her until gas pours out the carb, then adjust the fuel knob closed, spin her with the starter until she eventually fires, then quickly open the gas.

So I'm curious as to what your warm starting procedures are with your NH carbs?

My car is a 26, carb has been cleaned by me and is in what I believe to be proper adjustment...

You tend to loose compression as the motor heats
It may be low compression that causes your hard starting. Philip

Thats not normal at all... Ive had my 27 with an NH rebuilt by Russ and no hot air pipe start, shut it off and restarted within a minute. Believe it was below freezing out, or close and that was 1 1/2 turns open to start.

Hows your timing? I had trouble first starting mine... Set it with the tool sold by vendors but it was way off, did it by eye and bolt and started right up.

Either timing or your carb needs to be rebuilt.

Just saw the part about it being cleaned... Possibly out of adjustment then??

Have you tried just leaving it as it was when you stopped except to retard the spark? I suspect you are flooded. Try opening the throttle all the way without choking, and spinning the starter. If it starts you are flooded. If your float level is too high or the float valve leaks you will flood when parked a short time. Have you tried turning off the gas valve when you turn off the engine then open it just before you try to start? If that helps, also an indication you have been flooding.
An NH properly cleaned and adjusted will start right up when either hot or cold.
Norm

It has a Texas T distributor...the previous owner went with that during an engine rebuild 10 years ago to save on flywheel weight as they lived in the mountains. I but an electronic ignition in last summer and just carry points and a condenser as an "of crud" back-up. The restart issue occurs with both the EI and points. The car does like to run with the spark fully advanced and sputters like crazy when fully retarded, which leads me to think that maybe I need to advance the spark a bit when warm starting...but I'm afraid to break a Bendix or my arm since I like to crank it. (Some how I feel that hand cranking makes up for the missing magneto...a sort of penance).

Sorry Norm, we were typing at the same time. Great suggestion on turning of the gas. I'll try that.

I agree with John, that's not normal at all. Until I get around to rebuilding a G, my 1915 is running an ordinary NH. When it's warm one pull usually starts it on BAT. On MAG it may take two or three vigorous pulls.

My 1926 Model T has a Russ Potter Rebuilt NH and it starts very fast, cold or hot.

I hit the starter first and if it does not start immediately, I pull up and release the choke immediately.

Recently, while on a tour, I demonstrated this procedure with the same carbs and same results to two of my friends with the same successful results.

My theory has always been that it is easy to flood the engine and drown the spark plugs.

If that is the case, pull the throttle lever all the way down and crank the engine, without choking to prove it was flooded.

Verne..you took the words right out of my mouth.
My '13 touring will do the same thing about 80% of the time in the HEAT of summer...seldom if ever in spring or fall. And with 2 different carbs. No doubt I have a fuel line a bit too close to the exhaust pipe or even the hogshead? Any way, I just deal with it.

I violate the sacred rules of assembly by keeping the fuel line far away from the exhaust pipe. 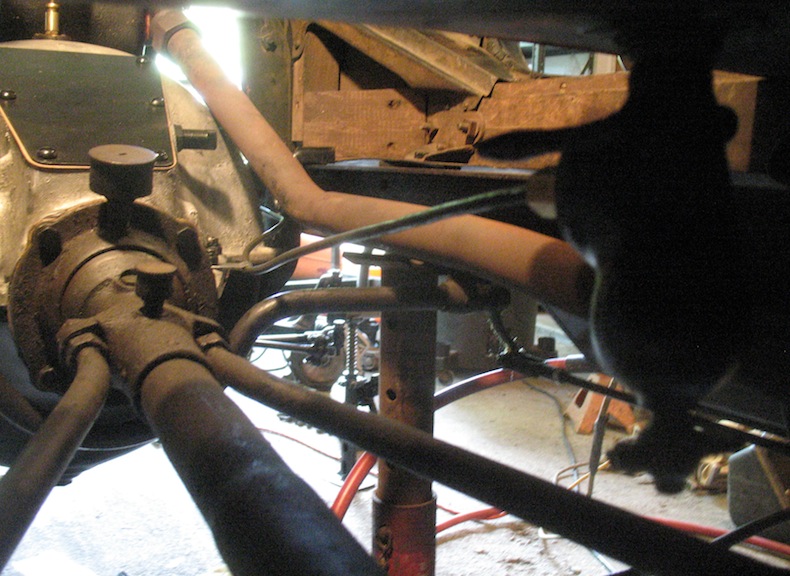 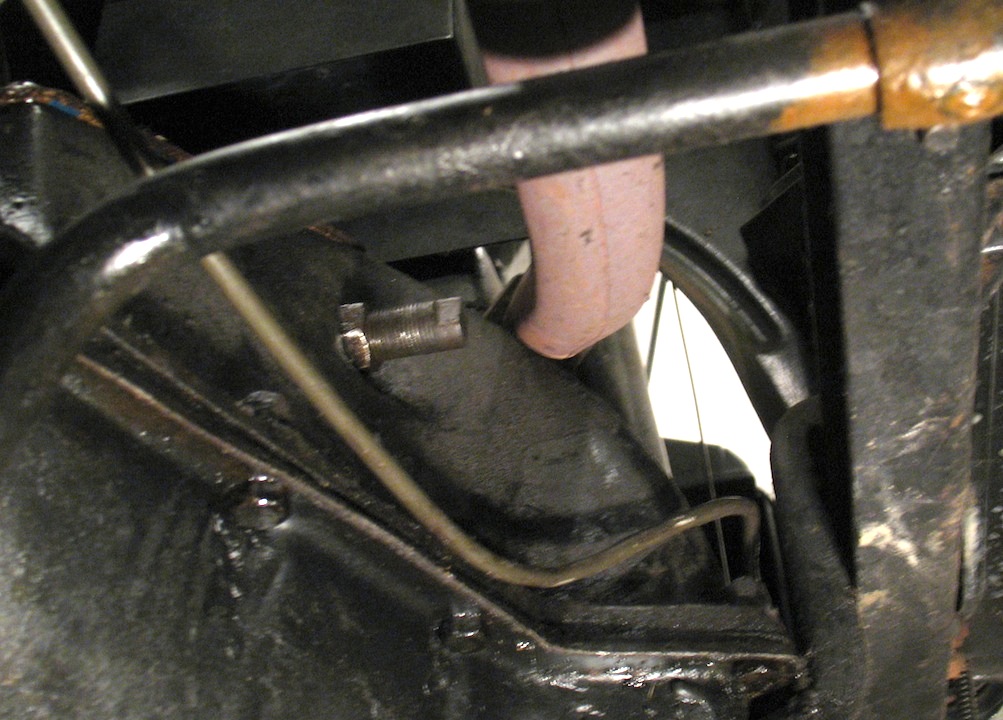 After experiencing vapor lock during a parade I re-routed the gas line on my 19 with an under seat tank to cross the exhaust pipe at a 90 degree angle and then follow the frame to the carb.

Thanks everyone! Well, today my three year old wanted to go for a ride, which gave a perfect time to diagnose the problem better. In the end, I do think it is a vapor lock issue. When I bought the car over a year ago, it didn't have a sediment bulb, just a paper filter and a line to the carb. I put a glass tractor bulb on from tractor supply. Today we started the ride great, bulb was full of gas... But at the end if the ride the hole top of the bulb was air. Yes there was a large air gap between the gasoline and the outlet of the bulb. It's not hard to imagine this gap growing larger when the car is turned off and not having time to cool with the fan. Today I ordered the correct bulb from Snyder's (I've been rotating my orders around all the vendors).

A little more background. I think I'm having this problem now because I have a new flat tube radiator core. Last year I had an old radiator and pump. The Moto meter almost never had red on it with the pump, but now it heats up like it should and thermosiphons. This mean the engine runs a little warmer which leads to my little problem.

Since it was vapor locked, I probably did flood it once the fuel got moving.

Hopefully this works, but if nothing else I will have the correct fuel feed set up.

George,
I have sent you a pm.
Jeff

I have a theory that since the carb is warm on a warm engine, when you shut it off, gas vapors from the carb can fill the intake manifold when the motor is turned off for a few minutes.

My solution is to leave the throttle wide open after shutting off the motor in order to let the vapors escape.

Not sure if this is actually the case, but leaving the throttle wide open does seem to help.