My friend Dale was in South Dakota recently and bought this item: 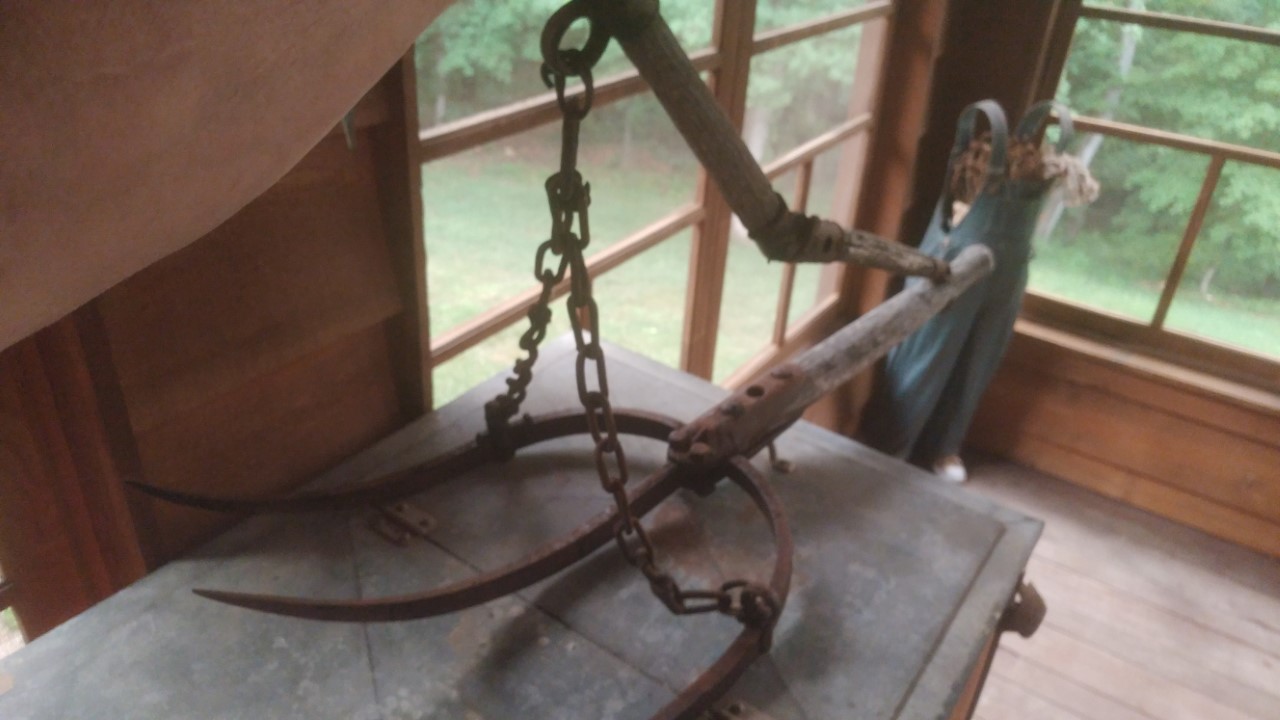 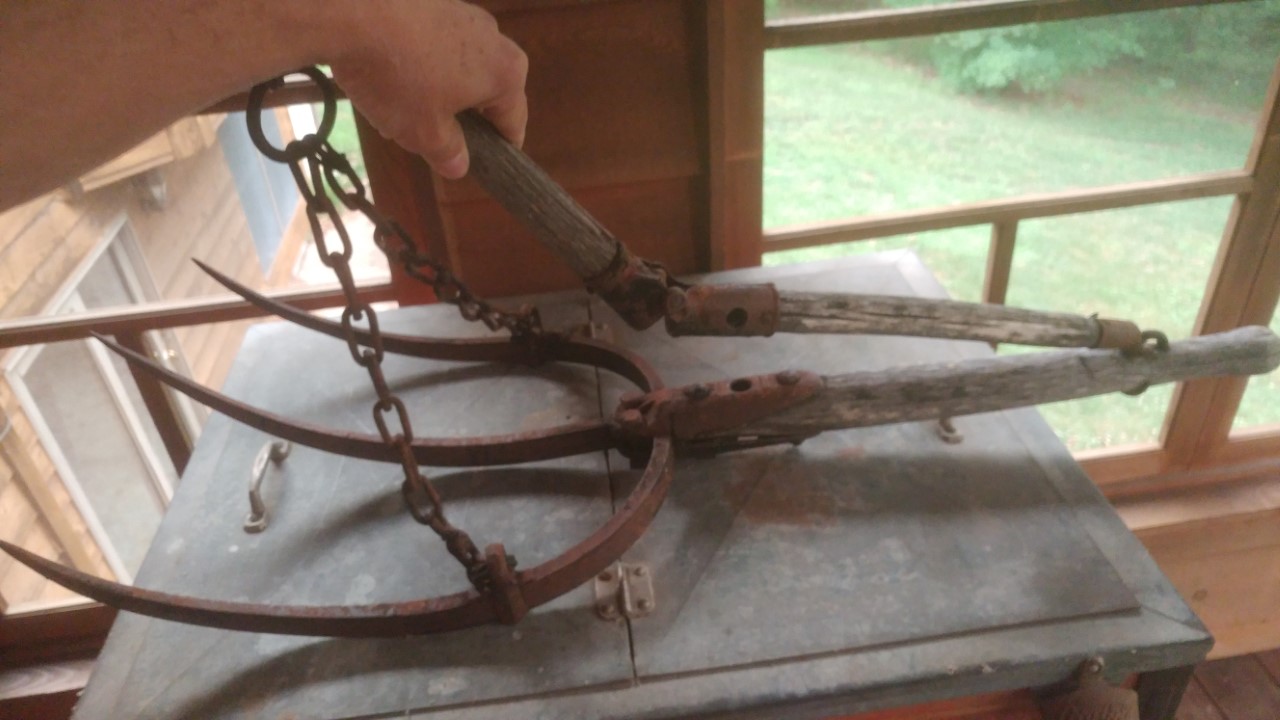 Anyone out there know what it might be?
It has a patent date of 1883, no year or month.

I know one thing it looks like A finger pinching rig,other use?I have no idea, its shure rugged, makes you want to call it a hay fork,many years ago I worked in a woolen mill,and to move the shawdy waste from the bail to the dye tank we used a fork riging,but I don't remember it looking like that.very interesting for shure.hope some one can identify what it is

Kind of looks like a hay loft fork. Mounts to the header frame of the barn loft door and you swing out the bales or loose hay and drop them into the waiting hay trailer below.

What's on the top end, a handle or a hook?

I wonder if there were 2 like that. Could use it to life bale into a loft. Either that or it was something to hang in the mother-in-law room to keep her in line.

Probably some kind of Jackson fork for loading loose hay into a barn loft, but it seems rather small for that. Hay was baled by stationary balers as early as the 1860s, but putting up baled hay in the field on small farms wasn't practical until much later.

Rich, is that why all the cowboy shows have perfectly shaped square bales in there barns? I always thought the producers of the show didn't know any better.

My first guess was/is also for putting or taking hay from a barn loft.

Looks like what you’d get if they sold farm equipment through TV infomercials.

Don’t think it’s for hay. I think it was used on a wagon to pick up wheat shocks by 1 man standing on the wagon. That way no one would have to walk in the field with a pitchfork and the wagon can go faster .... ???

All right I will weigh in. It looks like it is for cleaning stalls, short handled so it is easy to maneuver. The folding handle is for your second hand, one hand on the end of the handle and the other hand on the forward piece of the folding handle. Kind of like the snow shovels with bent handles to lift the snow. When not in use the accessory handle folds back onto the main handle.
In the late 1800's and early 1900's it was very common for barns to be fitted with trollies carrying large buckets to clean stalls.
I can see this fork being used pretty effectively in a confined space.
Just my thoughts,
Kevin

I'd call it a separator! It separated someone from their money!

Pretty sure George has it.
Just forwarded to a friend who will likely know exactly how it was used.
He owns several steam engines (two passed through my stewardship) and separators.
He'll likely thresh some this year.
Anyone interested in North Central,Northern Indiana area that would like to see it done,send me a PM.

Jim, still waiting for the update ! I also think George has it right. I forgot about hauling shocks to the separator . . . it would be interesting to see how it was rigged to do that, if he's right.

I've mucked out enough stalls to want a few more tines on the thing if that's what it was for ! ; )

I have loaded a few wagon loads of wheat schocks but have never seen any that heavy? Could it be for digging lose hay out of the mow? Not like any type of hay forks to unload wagons i have ever seen but after hay has settled in the mow it was hard to dig out to throw down.Most who would know for a fact have left us behind.Bud.

Bud, didn't you have one of these ? A "hay knife" is how we parted out feedings from loose hay in the stack. I was forced into taking a ton bale a couple of seasons back and resurrected the knife to deal with the dang thing ! 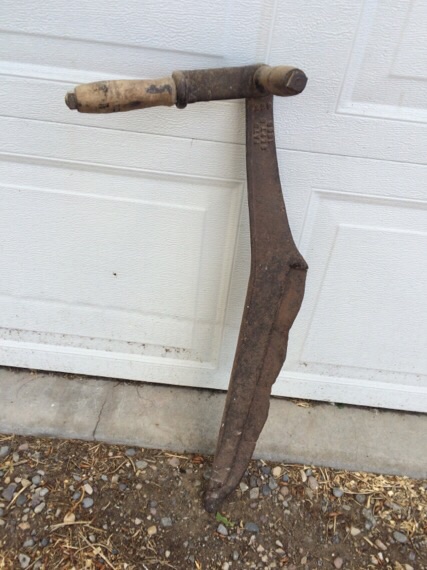 Rich,No but maybe we should have.I saw several this weekend and bought a nice 10 gallon crock so now i need to go to the Amish hardware to buy a cabbage cutter.We saw one very nice T roadster and also a good T/TT doodlebug.Found the Eagles in Harrison,Mi to be a great place to eat!!PS The Amish baked bread,doughnuts,and blackberry pie was great but don't buy the wallnut pie!!!!!!!!!!!!!!!!!!!!!!!!!!!!!!!!!!!!!!!!!!! Bud.

Possibly horse drawn potato digger, not sure how it works though

I showed this picture to my 95 year old Father who is still in good health.... He also just retired from farming two years ago.
He said he has used them when he was a kid. He told me it's called a horse fork and it is used to stack hay. he said its used between two towers to unload hay wagons. He also said he thinks they were made by Meyers and Louden. He also mentioned the reason that he remembers it is because his last name is also Meyers.

Well, there you are. I lost big time. Thanks for reporting on the real usage of the fork Randy. But, FWIW, I stack hay with a tractor front loader. My, how far we’ve come .....

In any event,it's going to raise your perspiration output.

Well i sure missed it! When i was little i remember seeing straw stacks but all hay was in the barn.Bud.