This Triple Gear bushing is stuck on the Fly Wheel. Need suggestions for best way to get it off. 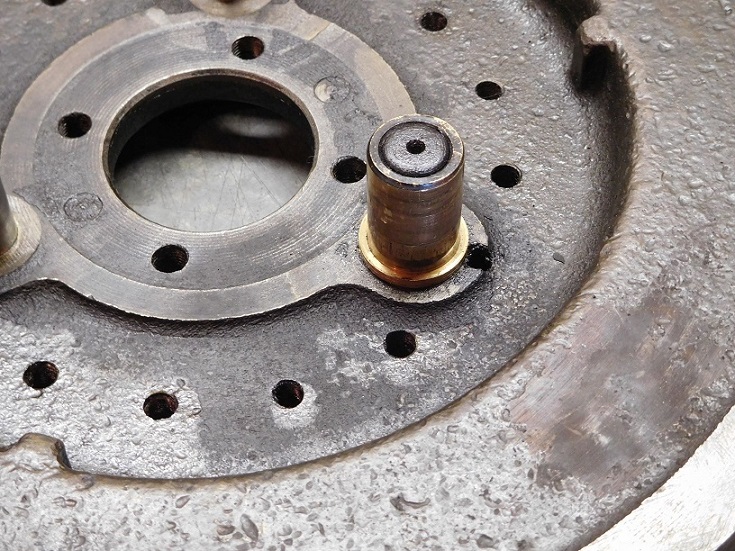 Slice it partway through (don't nick the pin) with a Dremel tool cut off wheel, then finish splitting it off with a cold chisel and hammer.

How about an acetylene torch flame to uniformly heat up the bushing without melting it? It should expand enough when warm so that it could be pried off from underneath or grabbed by a vise grip and twisted off. Just don't go for cherry red!
Marshall

I would also try even heat first with a water pump pliers to grab & twist - I've had to do both !

That problem may go back to a few years ago when the bushing material would expand when hot and then not contract again when cooled.

I found that same problem on a Triple Gear this week.

The engine had been run enough to enlarge the Triple Gear hole so the bushing would fall out.

This is the other extreme that I found 10 years ago. 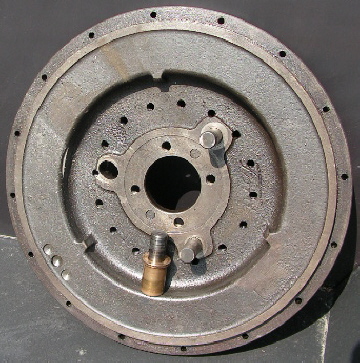 Allan from own under.

If you think the pins are serviceable, then destroy the bushing. Another way it get it off is, with help, support the pin on something like an anvil and peen it. It will come right off.

Chances are if the busing spun in the triple gear, the hole would be oversized. I would suggest when replacing the gears with used ones, get a set that came out of the same engine so the wear patterns are the same on all three. Also, after the bushings are installed they need to be reamed and faced for correct clearance.

Wow, lots of good suggestions here. I hope the pins are usable, I have measured the other two pins and get an O.D. of .674"-.675". I have a set of new bushings coming from Lang's. A local T guy has the reamers and experience in facing and reaming the bushings. I need to get that bushing off. I have tried the peening method, but not sure how much is needed. I have been using a small ball pein hammer and a big hammer for support. I don't know how hard I should be hitting it. I don't have torches to try the heating method, I can take it to someone who does. I don't suppose a bernz-o-matic would get it hot enough ? Thanks to everyone for their support and suggestions

Then grab it with a pair of water pump pliers and twist and pull at the same time.

It will come off!

Wm. -- Measure the triple gear pins twice, 90 degrees apart. They wear on the inner and outer surfaces, not the "sides." If there is a difference of more than a couple of thousandths of an inch, they need to be replaced.

Success !! I got the bushing off, mostly using the method suggested by James A Golden. Once I realized there is a spiral oil groove in the bushing the penetrating oil would go down the groove, eventually loosening the bushing. All of the responses were helpful, Thanks to everyone. My new bushings came to day.