I am looking for some help in identifying the year of a motor that I am told is in a 1926 model TT. Owned by my father for the last forty years to restore but never done. Thinking of taking this project on and trying to educate myself. It does have the heavier wheels and worm drive rear end with a ruckstell granny gear.
The serial #on the motor is T15960. I am not able to see the frame rail yet to check if there is a number there. I understand that year the serial number started to be stamped on the chassis.
Thanks for any info you can help me with. Will post photos soon.

The number doesn’t sound right. Sounds more like a casting number. Are you looking on the driver’s side of the engine, just above the water inlet? The number should have 8 digits and is stamped, not raised.

On the chassis the number should be stamped in the steel on the top of the rail, under the floorboard, either on the left, next to the emergency brake ratchet, or the right, across from and even with the ratchet.. Jim Patrick

Maybe a rebulders number or was issued a new title and number at some point.

Chris. It will be most desirable for the 8 digit number on the chassis to match the number on the engine. This is called a matching number Model T and signifies that the original factory engine has never been changed and has remained with the same vehicle since leaving the factory in 1926. If the numbers do not match, it simply means that the original engine was replaced at sometime in the last 92 years. It is not uncommon for the engine to be of a different year than the actual year the T was made, so if the numbers do not match, rely on the chassis number to determine the date of manufacture. Jim Patrick 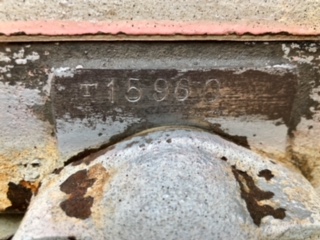 I apologize for not having a photo. Trying again. Hope this helps. thanks for any advice 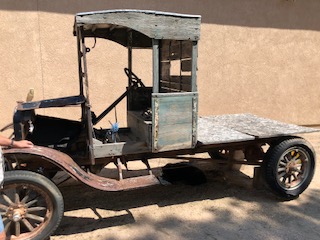 The number is on this truck.

That boss for the serial number is proper for a '26 block, you might check that the block has 2 bolts on the rear passing through ears on the transmission cover. That confirms a '26-'27 model year Improved engine. 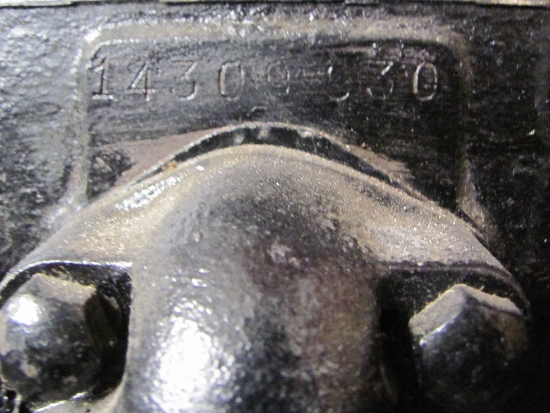 Your stamped number is likely a number assigned to a bare replacement block in the past. If you have title or registration documents with the same number, that would confirm.

Now that we know the engine was a replacement block, let's take a look at the rest of the engine. Does it have the holes in back that Dan mentioned? How is the fan mounted? Are the pedals wide, or narrow? Of course, if there's a serial number stamped on the frame rail that will date the rest of the truck to December 10, 1925, or later (1926-1927 model years). If you have a choice of which number to use for registration, I would go with the frame rail number, as Jim suggested, if there is one.

Chris. Please post pictures of both sides of the engine and the back of the engine (with the floor boards removed, when you check for the chassis number).

If your T is anything like mine, when I first bought it, the chassis number might be covered by 92 years of caked on grease, dirt and oil. Jim Patrick

Thanks guys. That makes sense. Original owner may not have read the service manual and went through a block I'll keep looking and post more pictures in the next couple days. The truck is not close right now. I believe the cab is over the side rail, where the number should be, so I'll have to do some careful demo. I want to save the cab at this time.

I there any way to tell the year of the block with the number that is available?

Without a lot of study of the entire engine, the fastest way to know the year of your block is to look for the rear boss that have the 2 holes for bolting to the Improved transmission cover. 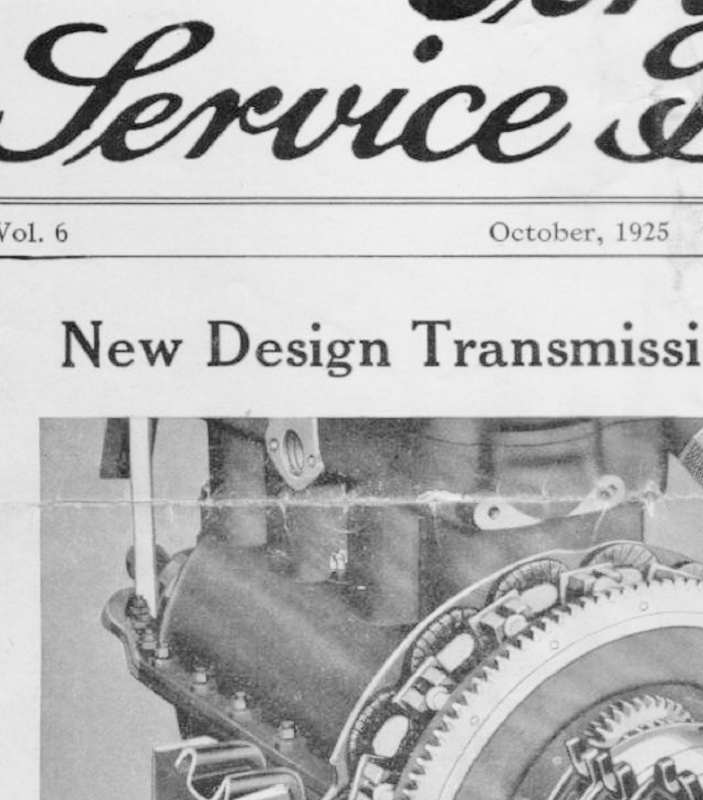 Now that late block can be fitted to older transmission too, older cover without the lugs for the bolts, but the bolt holes in the top rear end of this block confirm the '26-'27 date.

The two bolt holes in Dan's picture will tell you it's a 26-27. Up until 1927 the throttle rod went through a hole between the #2 and #3 cylinders. In 1927 the linkage went over the top of the engine. It's possible that the hole was broken open on a 1927 engine for the rod to pass through, but if the hole is closed you know it's a 1927 for sure.

I have a picture that I think I can see one of the bolt holes in Dan's photo. The throttle rod goes through the block, out to the carb. So, thinking is a '26 that has a new block for some reason. 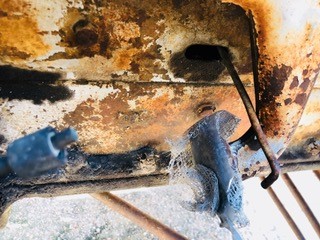 With the floor boards out, the bolts or holes in the back of the block will be right out in the open. Did you check the frame for a number? That photo really does not help date it except it's a block after 1921.
Good question for TT owners, did the TT ever come with the vaporizer setup? 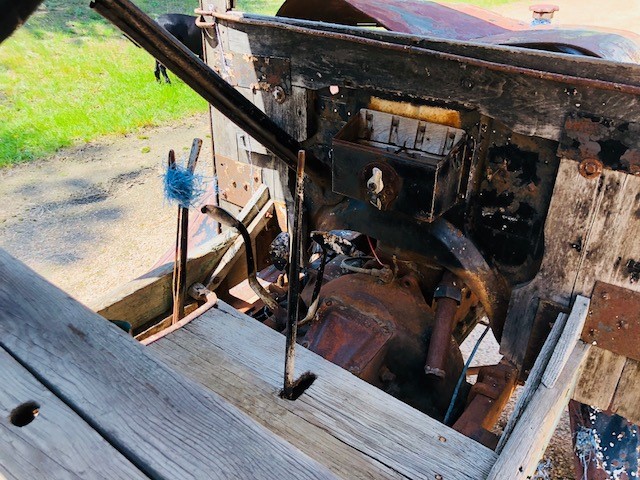 If you look hard, it looks like the bolt holes are where Dan's photo show them. Maybe getting closer. Sounds like I need to look on the frame and the number should be there.

I see the bolt holes in the hogshead but I see no bolts through them. Are there corresponding holes in the block? On a ‘26, the all steel coil box should be on top of the engine. Jim Patrick

Does look like the block has the bosses for the hogshead cover, the cover is '26-'27. 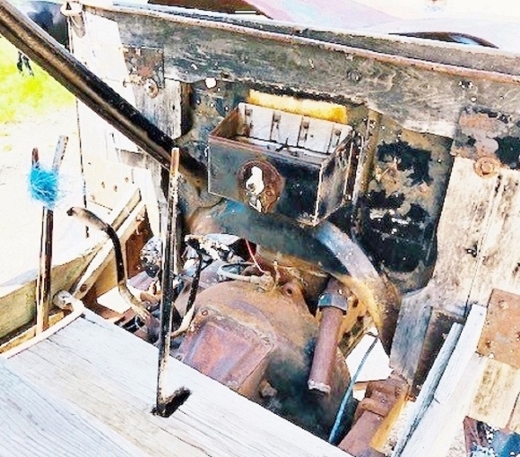 The coil box is early switch on box style. Could be this TT is made up of various year parts, don't know enough of TT, but the axle housings can date the rear axle if early due to changes later on.

I was able to get back to the truck and take a better look at the side rail. I am not seeing any serial number. The story now is, Dad says a '26 with no title. Mom thinks '24 and she has the title in her records. We'll have to see. 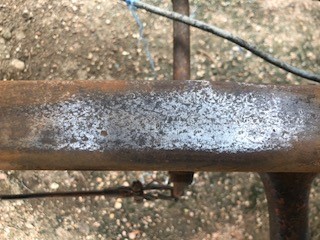 Could this possibly be a late '24 or early '25? Research seems to indicate parts were moved and stamping the chassis seemed to start halfway through the model years. Without having the actual serial number on the block, I'll have to narrow the year down by parts and their locations. Otherwise, may never know.

The coil box is in the correct location and appears to be the correct type for a 26-27 TT. There are a number of 26-27 improved car parts that were not used on the TT trucks. The frame number, if it is a 26-27, could be to the left or right of the area you cleaned. The frame number also occasionally turn up on the drivers side frame rail.

Just noticed the switch on the front of the coil box. It is incorrect for 26-27. The coil box is in the correct location for a 26-27 TT.

Sometimes a T or TT is such a parts salad that you'll never know for sure what year it is. Maybe some of the TT experts can tell if this clue about cars also applies to trucks: The 25-27 hand brake quadrant has two rivets. 1924 and earlier has four.

Thanks Tom. I did do some looking on the drivers side rail, not to the extent of the passenger side, and i didn't see anything that resembled a number. info about the coil box is good to know.

I have t frames from 1917? To 1924 and have never seen a number. Disassembled a 1919 that was truely original and never found frame numbers.

Maybe the lack of a frame number is the necessary clue you need to show that, what you have is a pre-1926 T. 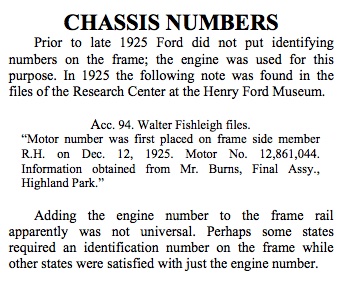 steve I had read that info before and that was why my thinking it may be pre '26. I'm starting to think you may be right on the "parts salad". If it was used by a real farmer, I would think if something broke he'd fix it, or get what ever would make his truck run. Somebody has painted it red (chassis) and green (cab). I'm going with xmas tree delivery in south texas. It was a stake bed.

During the T era and into the thirties very few people thought of these vehicles as historical relics. They were just old cars and trucks. The concept of "correct" parts for a particular year was unknown. If you needed a part for your older Ford, they would sell you whatever version was current if it would fit.