I purchased a rebuilt starter that was said to have a NOS Bendix. It is definately NEW but not a Ford part. Has anyone seen a Bendix like this one? As seen in the second photo, the "unbalance" on the gear is provided by an off center flange affair. (Ignore the edge of the bendix spring). I am having a problem getting this flange to pass through the transmission housing. The second thing I see (measured) is that the left end of the gear (first photo) extends 0.075 inches closer to the fly wheel gear than an original Ford part when the gear is fully retracted. How much clearance should there be between the end of the gear and the fly wheel gear face? Maybe I don't need/want this bendix. 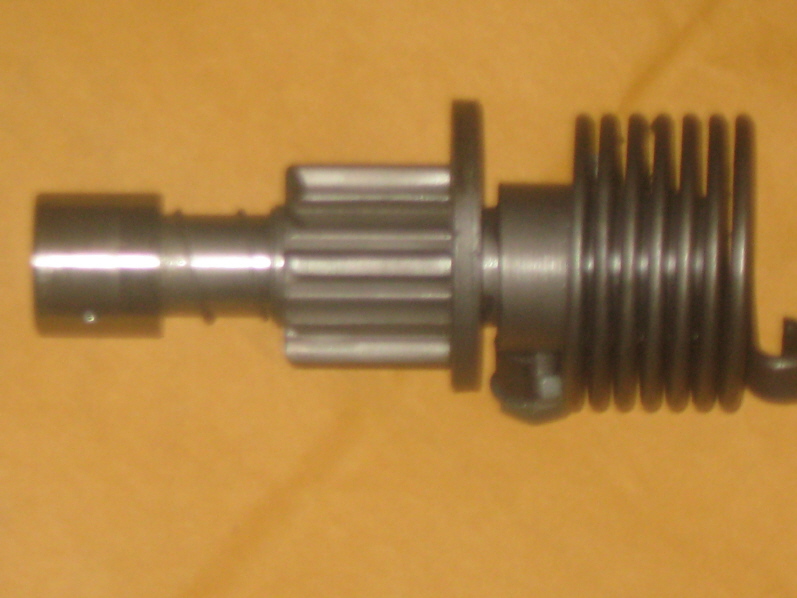 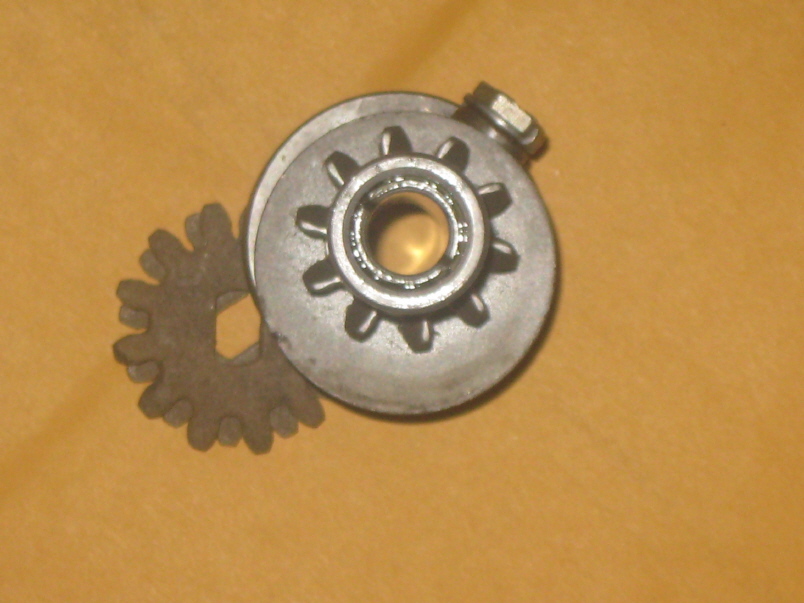 Were you able to remove the assembly intact? There has been a lot of mag rings damaged by attempting to do so.

I would use another, the front of that Bendix doesn't show the screw form, or is it the picture? Anyway seems not like a T Bendix to me. 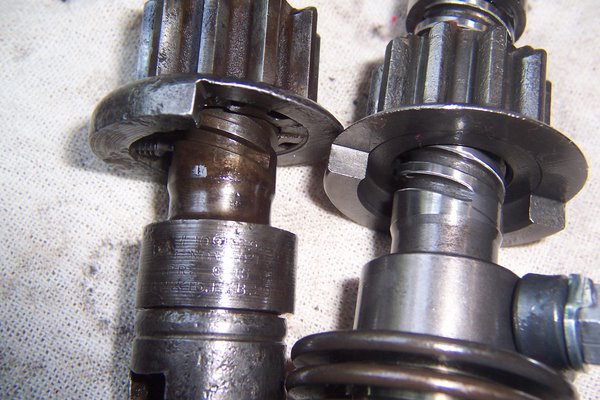 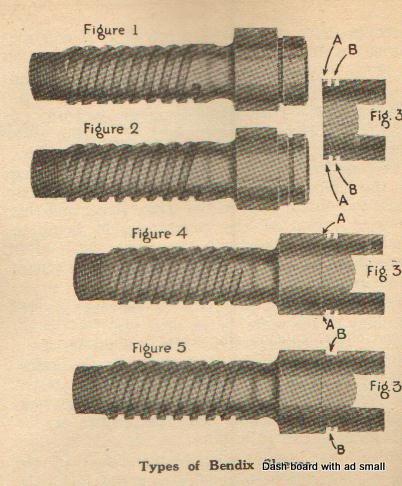 2 styles of original Bendix screws and how to fit the sleeve by crimping the 'bridge' between the slots into the screw groove. 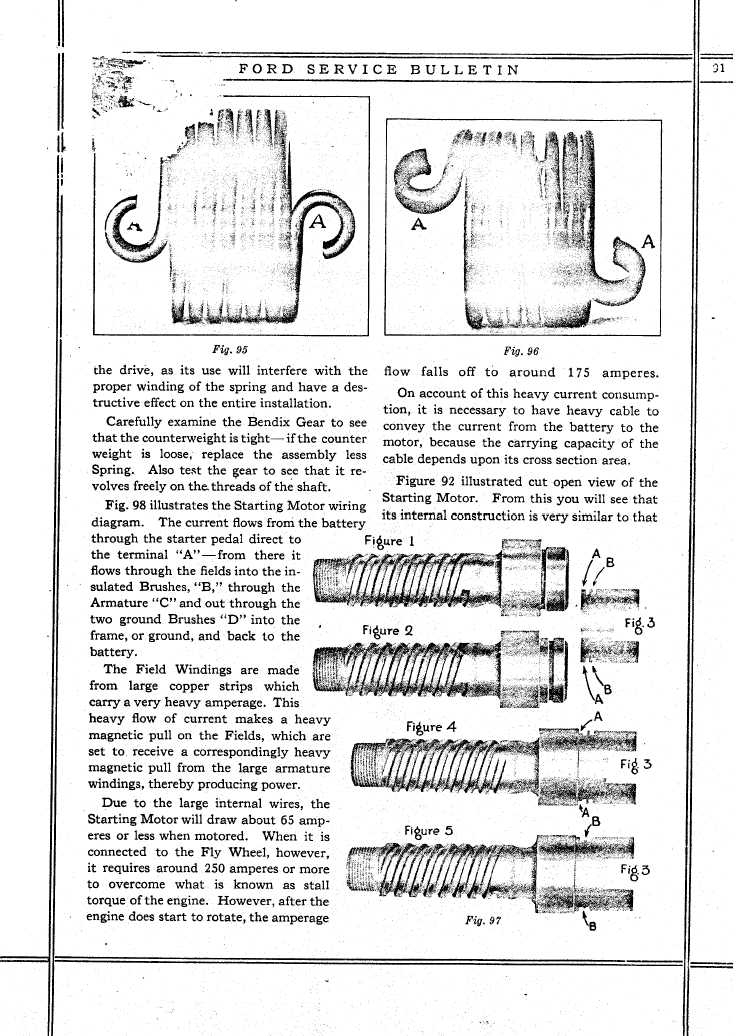 I pulled the bendix before I removed the starter then installed the rebuild starter. Maybe it was just late but I was having trouble getting the bendix on the new starter. Was just wondering what this new bendix maight be. I know it's not a "modern" repro. The fellow I got the starter from said he bought it a swap meet years ago.

The fellow who rebuilt the starter said he bought the bendix at a swap meet years ago so it is not a modern repro. It Does not have the gear "threads" all the way to the end but the gear does rotate all the way as the original does and feels good so must be supported internally some how. Appears to be same as a Ford part except for the gear threads and the difference in the way the imbalance is induced on the gear. Fits the starter fine. How much clearance is there betwwen the fly wheel gear face and the end of the bendix gear?

Jim, I'm going to dig though my box of bendix's. I'm thinking I've seen one of those somewhere. I'll check it out if I can find it and get back with you.
I noticed the small return spring but I didn't notice the threads not out to the end as Dan saw. I'm thinking it should work but you need to get it assembled and check the clearances. I'm not sure of the recommended clearance but I would think 1/4" would be sufficient??? I just installed one on a new engine a few weeks ago and didn't pay attention to the gap. It works fine though as I've had the engine running in the chassis.

The reason I was asking about clearance is that this bendix gears appears to go about 0.075 inch furthur in toward the flywheel than the old Ford part. Don't think I could explain it in words but I took some measurements with the starter on the bench. The new bendix has no manufacturing info stamped on it. 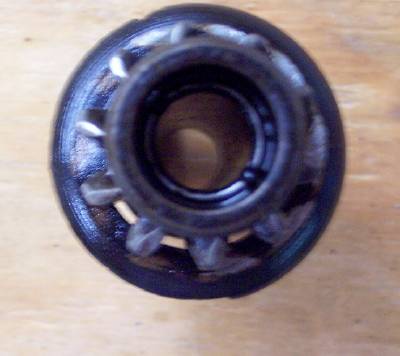 Still don't think that Bendix is correct.
Here is another view of original from gear end. That one of yours seems to have an eccentric plate at the gear end, doesn't seem right to me. 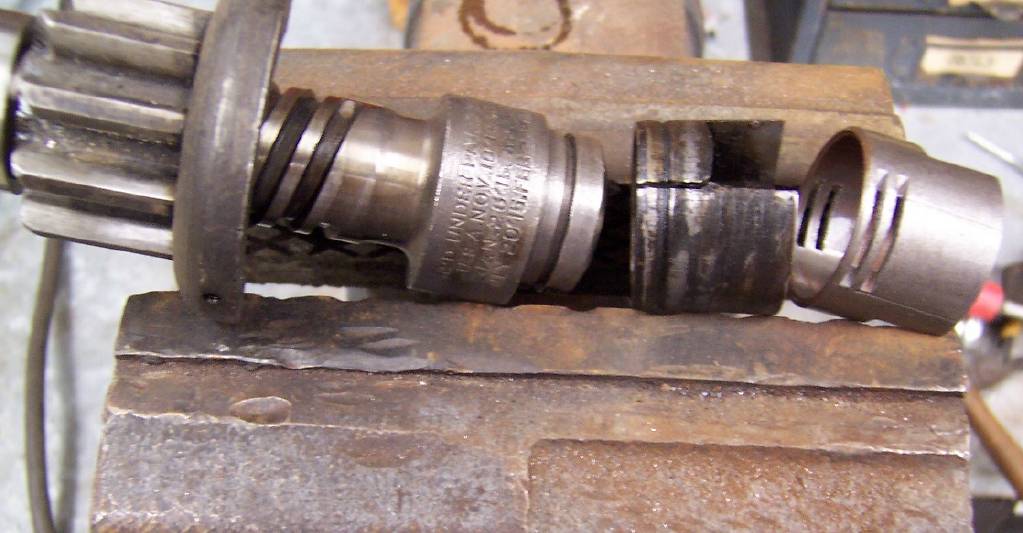 Here is one that I repaired, had a split apart collar. 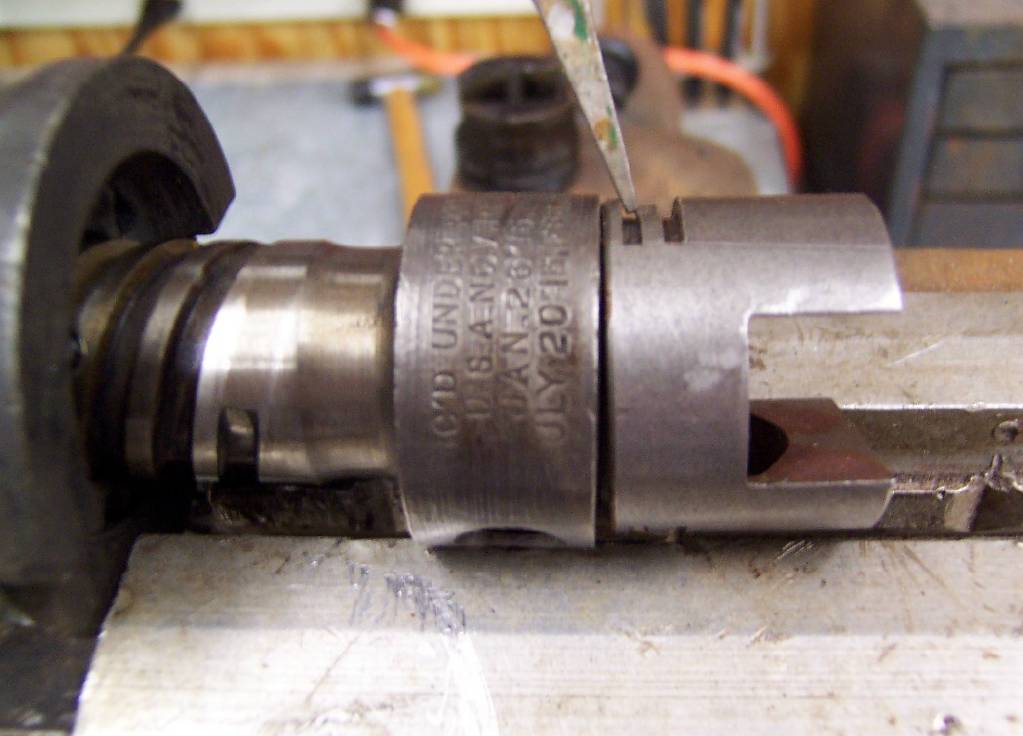 Placed new repro collar on shaft, crimped the tang between the slits with the authorized crimping tool 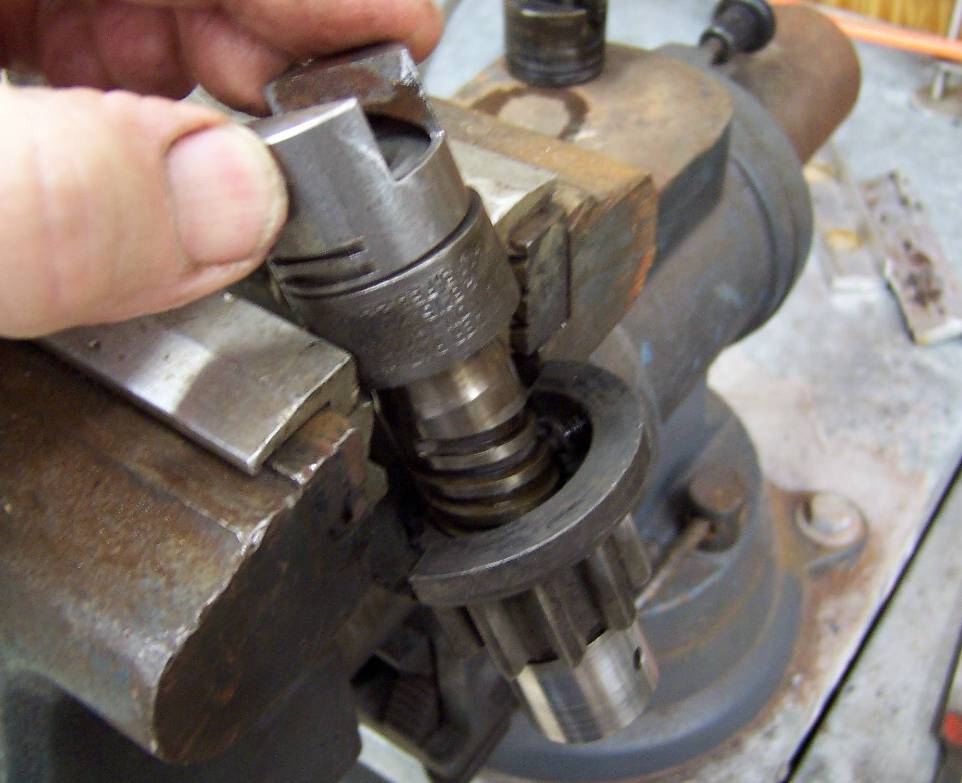 After crimping both tangs, finger test to be sure its secure, but that the new collar spins freely.

Ready to install on the starter shaft

Jim, I found the bendix I was thinking of and it's an exact match to yours. I put it on a spare starter and it seemed to fit fine.

There are no markings on the bendix. The teeth are a little longer than the original T bendix. Mine did not have the small spring like yours. The spring should help the bendix to return. Not sure how long the small spring will last since mine is gone and looks as if the bendix wasn't used much. The original T bendix had a small pin and spring that acted as a brake. I noticed the drive on mine wouldn't screw all the way back to the large boss. Mine had a home made ring between the gear and the boss which I assume there may have been an issue with the drive gear hanging up and causing a no engagement.

About all I can suggest is to try it if you feel comfortable with it and see if it works. Listen for unusual noises while engaging the starter and while the engine is running. You don't want ground up metal on the inside of your engine.

Dan - I know that is some sort of after market repro bendix. The eccentrix plate appears to be this bendix's design that duplicates the function of the balance ring that is sweaged on to the Ford bendix drive gear. The plate unbalances the gear as does the balance ring. See Kenny's post after yours also.

Kenny - well at least I'm not the only one that has one of these things. There's good news and bad news. Good news is that after having the bendix on and off three times it magically seemed to be positioned same as the original Ford part. What I mean is that with the gear fully out, it takes about 1/2 turn for the gear to move toward and contact the flywheel. Same for both bendixs so assume it was installed correctly. Now for the bad news. I left the bendix cover off and hit the starter button. The gear went in and engaged the flywheel but the "eccentric" plate wedged in the transmission cover hole. Fortunately, when I loosened the starter screws and wiggled a bit the bendix would slide off. Don't know if I want to trust this thing or not. Guess I could grind down the radius of the "eccentric" plate so it would clear the transmission cover. I think I will call the rebuilder Monday and see if he has a good Ford bendix. As I said, when I ask some questions about his rebuild before I bought the starter he told me it had a NOS bendix. On face value, that made the starter worth a bunch more so I bought it. If I had looked at the eBay photo very closely blown up, I would have seen it was not an original part. Mumble, mumble.

Jim, did it really wedge in the hole or did it engage into the flywheel and stayed engaged because the engine didn't start? The engine once started turns the drive back to it's resting position.

Guess that's a good question. I thought it was wedged since I could not turn the engine over with the hand crank. Should have been able to shouldn't I??

I would think that you should have been able to crank the motor over and that it should have backed off the drive. Look at the washer and see if there is a contact mark. You may be able to grind some off.

If it wasn't for the fact that a failure of the bendix could cause other catastrophic failures in the flywheel and magnet area, I'd tell you to expirement. I think I'd cough up some $$$ and buy the correct part and mark this experience on my "don't do this again" list.

I could see contact marking along a section of the balance "washer". I don't think I want to risk what could happen. Are todays repro bendixs good products? Guess I can sell this one on eBay to someone who would like to experiment. I wouldn't advertise it any other way.

I'm running one in my 23 that been in there for 5 years and seems to be holding up fine. I've been lucky enough to find some very good used ones for my later projects.