My dad recently acquired a 1916 that was disassembled back in '72 after it was trapped in the hurricane Agnes flood and placed in storage. It's still in boxes so now the fun begins!

Anyway, we're having a difficult time figuring out how the wood firewall attaches to the cowl and frame, and also how the hood former attaches to the firewall. If someone could please post pictures, this would help greatly. The firewall that came with the car has a slot for the choke which does not seem correct for a 1916. Also, it does not seem to fit inside the hood former as it should.

Again, if anyone could post pictures it would be very helpful. Thanks!

Here are a few pictures of my 1916 Touring. I believe it is a Fisher Bros body from about June 1916. 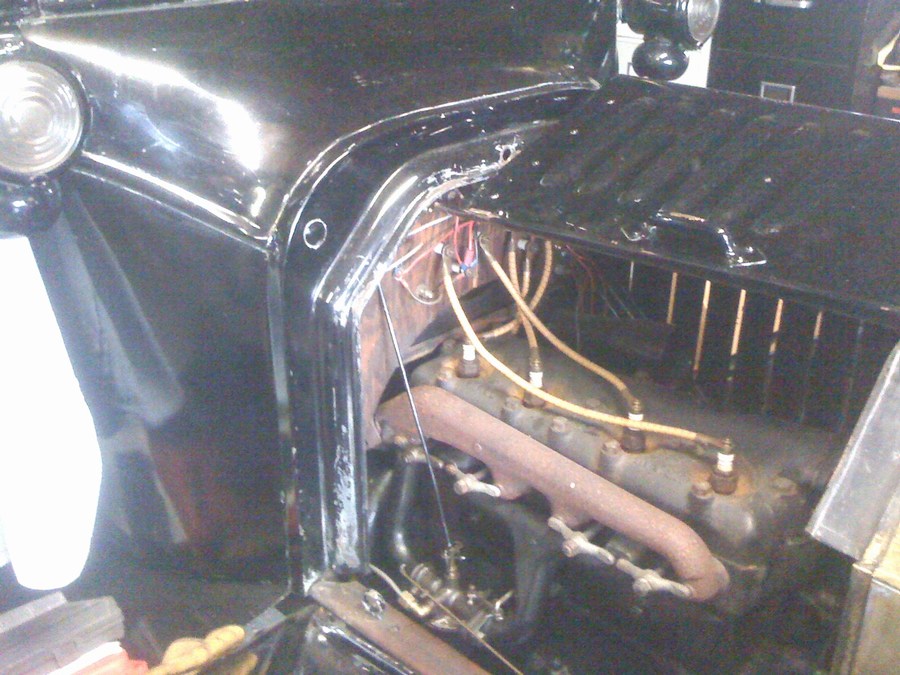 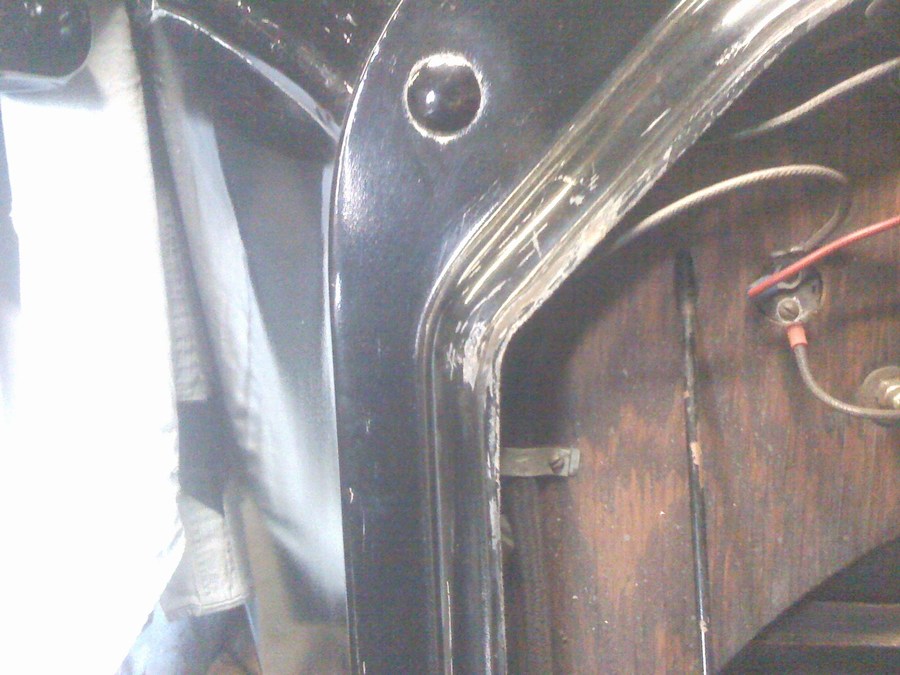 Wood block on inside with nut for bolt shown in first picture. Bras knob is the inisde end of the carburetor adjustment - needle valve. 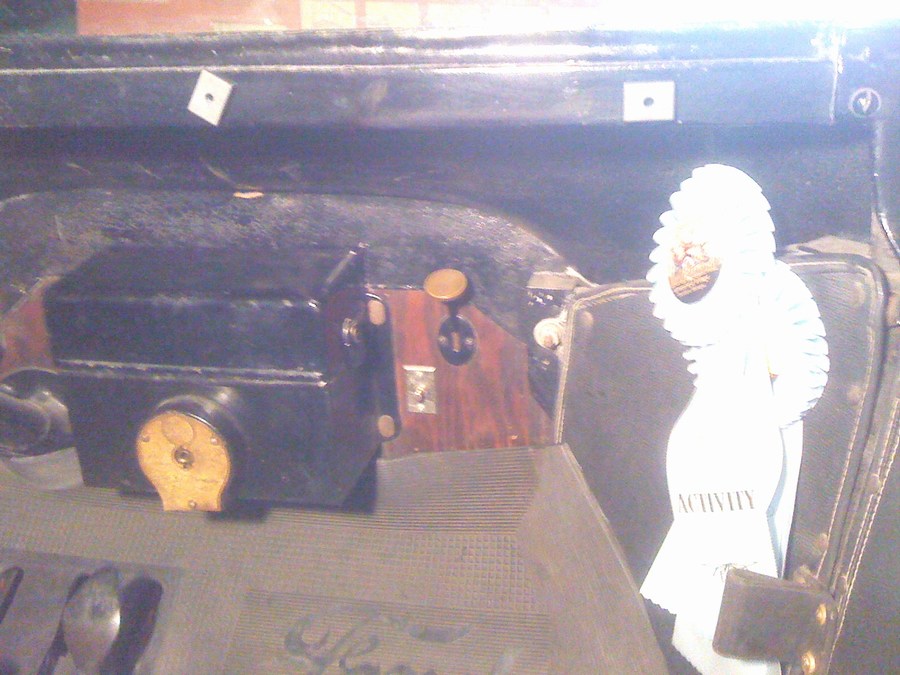 Thanks for the feedback. How does the firewall attach to the frame? We are missing firewall brackets and are unclear how these would attach at the firewall and at the frame.

This isn't a '13, but shows how the cast steel early dash brackets fit from the frame top rail to the wood dash board. 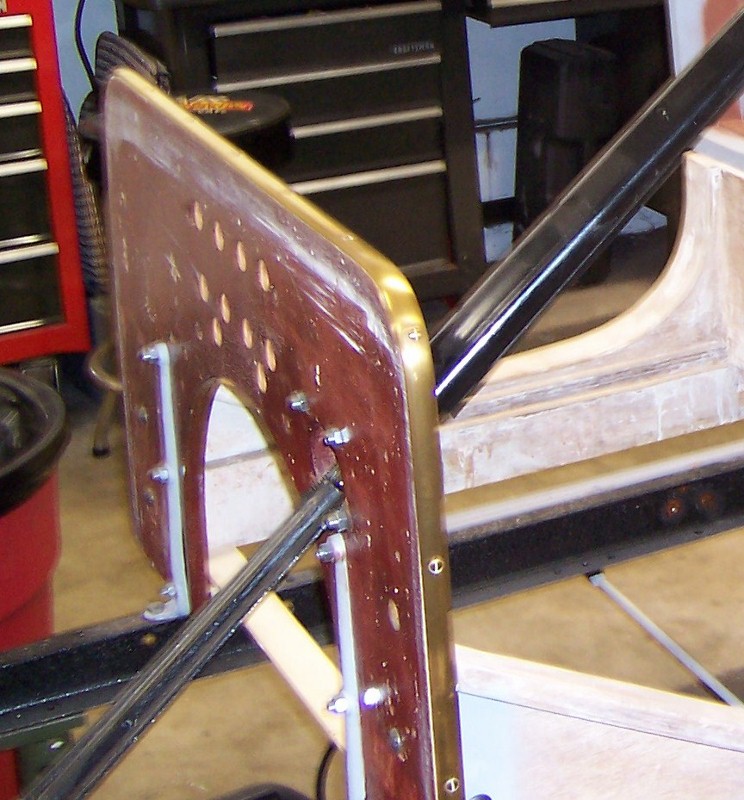 The '17 and later used the pressed steel brackets mounted from the side channel holes on the frame and then to the wood firewall.

Those brackets should have round holes in them.

The ones pictured would be wrong type for your T.

One other thing should be mentioned. The firewall in 1915 - 16 was originally painted black.

This car is a very very early 1916. It has a firewall that fits inside the hood former. It also has holes in the frame rail that ear would be for a firewall bracket, but we don't see how it could attach in between the firewall and hood former. A pressed steel bracket used in the 1917 cars would work, but we want to know what would be correct for a early 1916.

Is there even a bracket used? With the wood firewall sandwhiched between the cowl and hood former, I can't imagine that you would even need one.

I believe that there is a bevel around the edge of the firewall where it fits into the hood former. They slope down towards the engine. The brackets also help support the front of the body.

Dan -- You'll need to attach the dash brackets to the dash first, then slip the hood former over the dash. The dash needs those brackets, since it supports the steering column. Don't trust the dash-to-body bolts to keep the steering solumn securely located. As Royce mentioned, to be correct, your dash should be painted black. 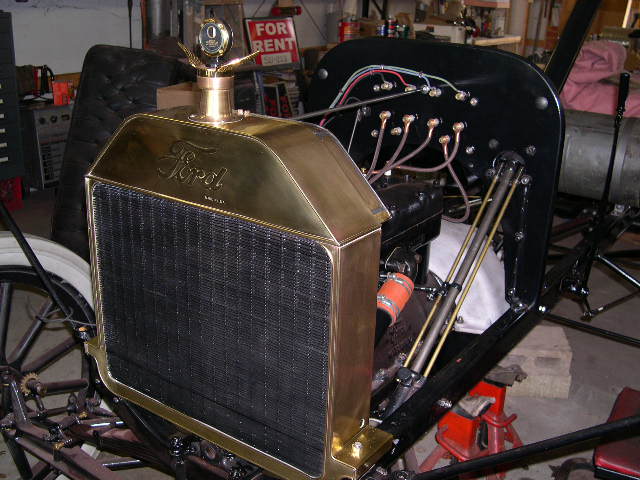 Here is a later pic with the hood former on. You can see the top two bolts of the dash bracket, which is partially hidden by the wiring loom. 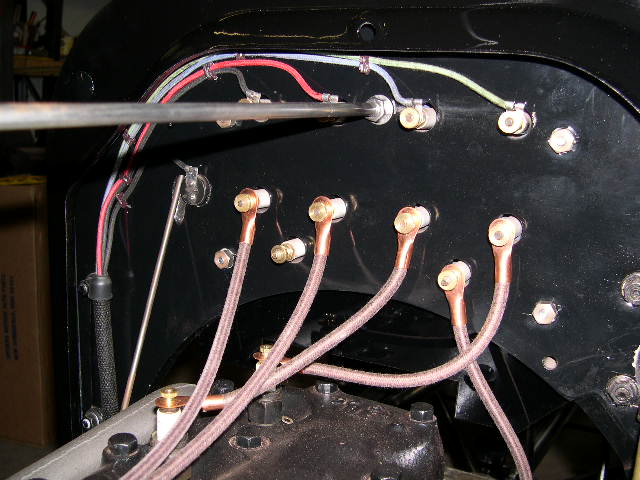 Thanks for the pictures Mike. That was a big help. Now I'm going to have to post a wanted add for a set of brackets.

Dennis,
Yes and yes. The model year hood former for '15 and '16 is unique and interchangeable. It encompasses the entire firewall. The earlier hood formers were only about 2" strips of sheetmetal that closely approximated the outline of a closed hood of those years and were screwed into a brass rimmed roughly square firewall. And with minor differences the '15-'16 cowls could interchange with everything up until model year '23.

From you profile it shows this is your 5th posting. Welcome aboard! Be sure to contact some of the local T folks near you. For example, if you lived near Sumter SC, I would say – stop by and you can look at a 1915 cowl and a 1918 cowl and see how they are alike and how they are different. Have you checked to see if there is a local club near you and/or some members near you? See: http://mtfca.com/clubpages/chapters.htm and http://mtfca.com/MTclubs.htm 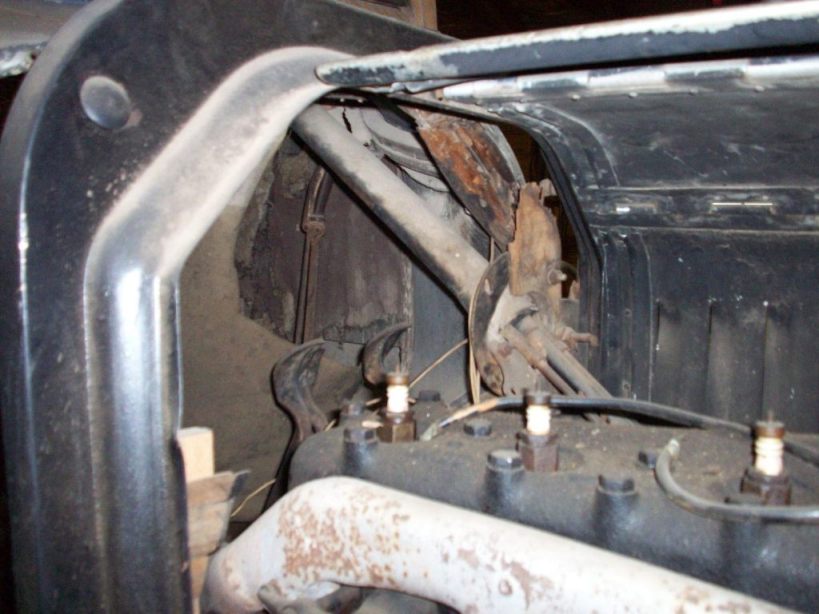 You can compare that to the 1911-1914 style illustrated in one of the vendor's catalogs at:

The 1915 -196 is unique to those years. But Ford built parts to interchange and it uses the same firewall brackets as the 1914 and earlier cars. Since the hood and firewall brackets are the same as the earlier 1914s – it basically takes up the same amount of room as the 1914 hood former and it’s firewall. Note that it is similar to taking a 1914 hood former and welding onto it a metal flat back with a lip to go over the firewall – but I believe it is single stamping.

First the 1915-1916 cowl does NOT have a half moon cut out for the radiator rod support while the 1917 and later black radiator cars do have that support. 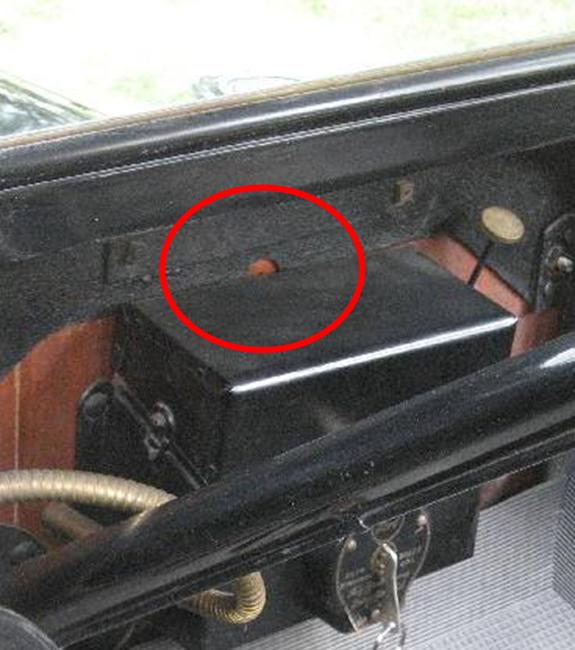 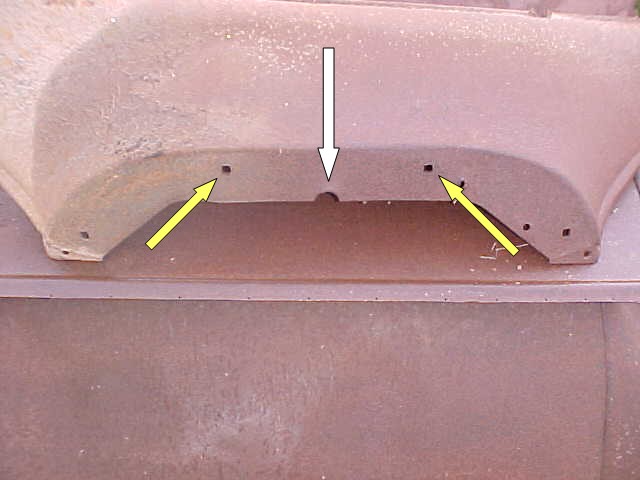 Additionally some of the 1915-1916 cars but NOT all had the front flat section of the cowl riveted on (9 rivets but only 7 show when the wood is installed) and is shown below: 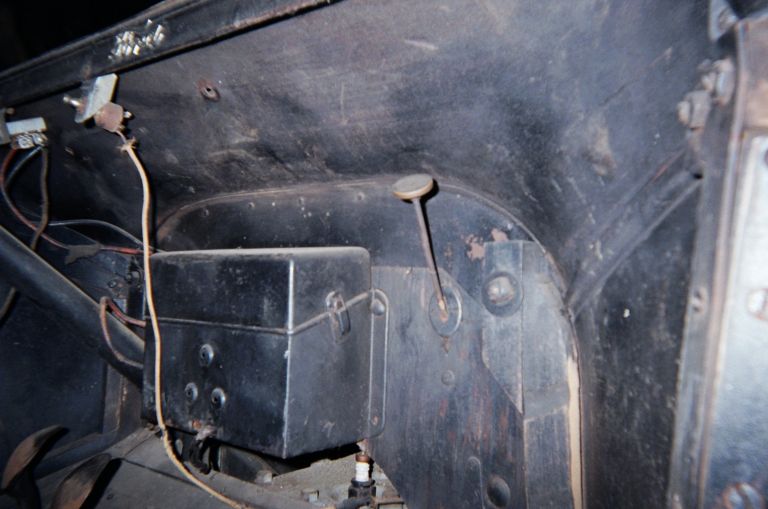 We think that one or more manufactures used that style (NOT Beaudett, NOT Wilson) and that it may have been continued into the black radiator years. See the posting about 1915s at: http://www.mtfca.com/discus/messages/29/13259.html for a discussion of how folks have taken later bodies and fitted them to 1915 cars (they fit and function fine). Below is a photo of the “half moon cut out” on a 1917 – early 1923 body.

However, earlier brackets will not work, the top bolt location is different and as a result the steering column bolt for a 1915 / 16 will not align if the firewall bracket is from a 1909 - 1912 Model T. There was some overlap with the 1912 style steering column being used on 1913 style bodies, these would have required the 1912 style firewall brackets.

Oops, now I am somewhat mistaken! The firewall bracket / steering column change occurred in early calendar year 1912 for tourings and roadsters. Town cars continued to use the earlier designs until mid calendar year 1912, well into the 1913 model year.

At first glance it all is very confusing but the offset hole in the steering column base of some early columns is the result of the steering column being lowered at the dash while the dash mounting brackets did NOT change. The top hole of the dash mounting brackets was 10" above the frame surface on the typical 1909-1910 cars and the top hole of this bracket did not share the bolt of the steering column until sometime in 1911 when the brackets changed. This change did not occur until sometime after 12/21/10 since that revision level of the dash drawing still shows the 1909-1910 bracket drill pattern. These later brackets are what is found on typical 1911 cars and had the top hole located 10-23/32 above the frame and the hole was now shared by the steering column. Those brackets remained unchanged into 1916. The new "1917" dash is the first place the next version (sheet metal) of the bracket shows up on the dash drawings and that dash drawing was adopted on 5/2/16. Thus it would seem that the early bracket was used on Brass radiator 1916 cars while the sheet metal version was for the typical Black Radiator car of 1916 and later.

When Ford lowered the column in 1912 they kept the bracket the same and offset the hole in the column base until 7/18/13 when the new later column had the hole pattern redrilled in the steering column and dash so that the 4 bolts were again symmetrical but the hole that moved at that time was not the offset hole but rather its mating hole on the other side at the bottom of the steering column flange. This then was the typical 1914 column. The dash bracket did not change at this time.

As someone mentioned - the edge of the 1915/1916 dash is complicated to match the inside shape of the hood former. The basic angle is 17 degree bevel but there are radius' on the top edge and bottom edge that are each different. I broke down and bought a custom router bit to cut the edge of the dash to give it the correct profile since you can't even buy a 17 degree bit to start the edge with. I am not sure what the typical repro dash has for an edge but unless it is shaped correctly you will have a battle trying to get it to fit right inside the hood former.