You have all heard my incessant harping about fully rebuilding the flywheel during a Model T engine rebuild, carefully checking for damaged components.
The current Model T Times has an article with an extreme account of the consequences of cracked magnets.
If that account doesn't convince you nothing will?
Ron the Coilman

Ron;
I see you got your new Model T Times also.

I was thinking about you when I read it, Ron. When I recently replaced the magneto and recharged the magnets on my 26 I was surprised that none of the magnets broke on banging them against a chunk of railroad track (my anvil). What percent of magnets do you find cracked?

Noel
On some flywheels you find none and others several. Given the potential for trouble it is certainly worth being checked. I am not sure what factors contribute to this occurring.
Ron the Coilman

That made me scared so I opted out of the horse shoes. I run my engine pretty hard and thought this could be a problem for me. 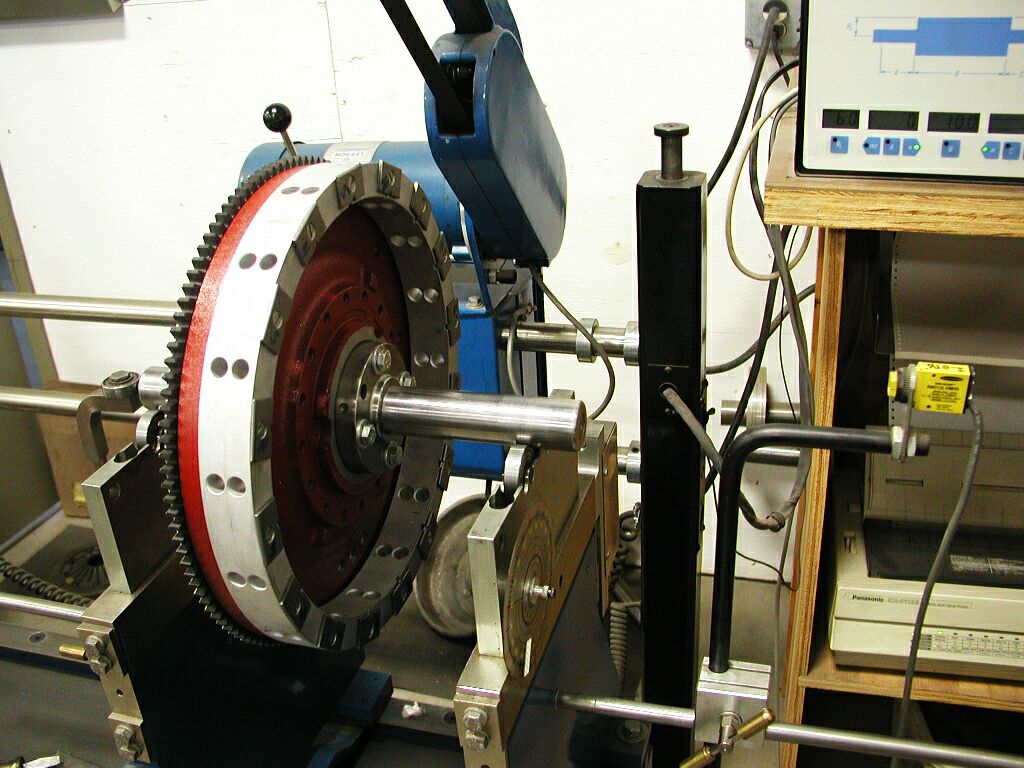 Bill
I understand you know what your doing, but show us there the magnets are and what do they look like?
Ron the Coilman

Ron
I use rare earth cylindrical magnets they are under the keepers. works out great at first I was worryed because I thought it put out too much voltage but I had E-mailed you Ron and you told me the coils only use whats needed to fire them. I have been running 2 summers now and the coils are fine.

I had a lot of help from Ollie reading the Model T service Manual so things went much faster and easier! 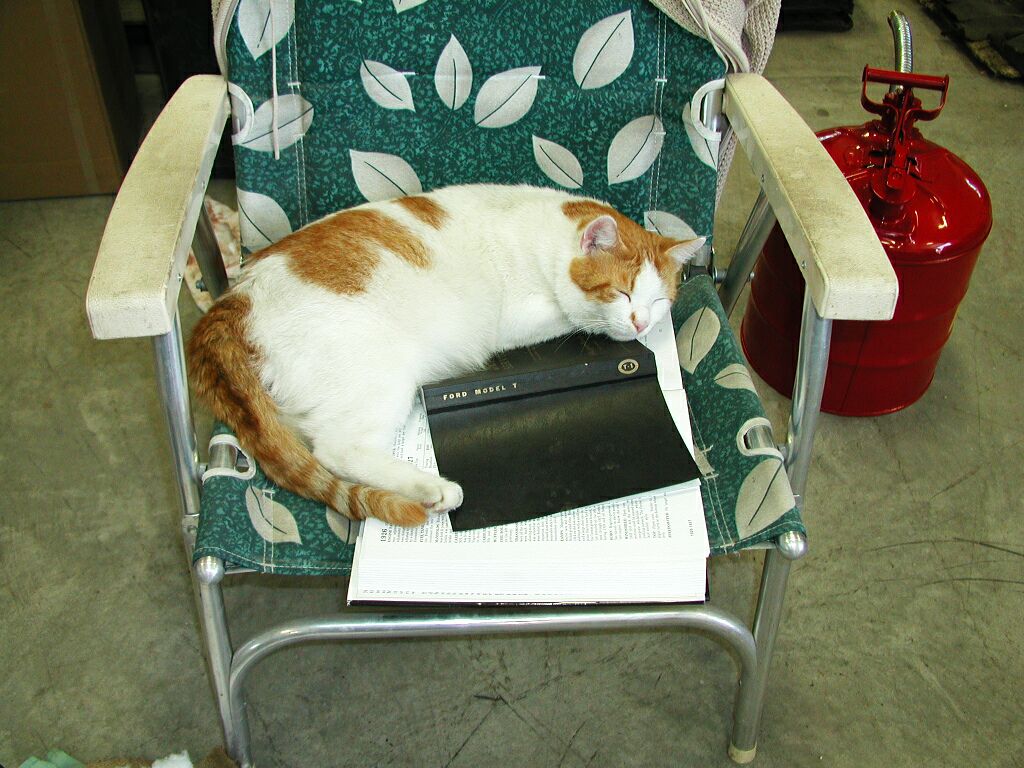 We have a "Holly" that looks just like "Ollie". I tell her she doesn't have proper stripes. I guess I'm a tabby kind of guy. She is sweet though. Sleeps with us every night.

Bill I would like to know more about what you are doing with the magnets. Do you have a photo of a magnet before they were installed?
Thanks

Ditto Bill. I would love to know the whole story on that ring.

Also, I have the other bookend garage worker.

When my dad died, I was going through his work bench and found a "V" shaped thing with "Ford" written on it. It was (sort of) magnetic, so I concluded it must have been a magnet. It wasn't until I got a Model T that I figured out what it really was.
It's just barely "magnetic", how do you go about recharging a Model T flywheel magnet?

Dennis,
Do a Google search for "recharging model t magnets" and you will find a bunch of info on recharging magnets.
Jim

Thanks Jim, will do. Didn't think of that.

Are there any plans to sell that rare earth magnet ring as an aftermarket item?

Hal you should post a picture of Holly
Erich helper looks like Ollie only a long hair.

I have been trianing Ollie to read blue prints but he keeps falling asleep!

Anyway on the magnet ring I did not take anymore pictures as I was building it but you set your magnets like the original SS then NN and I selected a magnet long enough so the opposite pole did not interfere with the other about 3/4 long.
I planed on building more for anyone interested but thought I better test first and so far its working great. 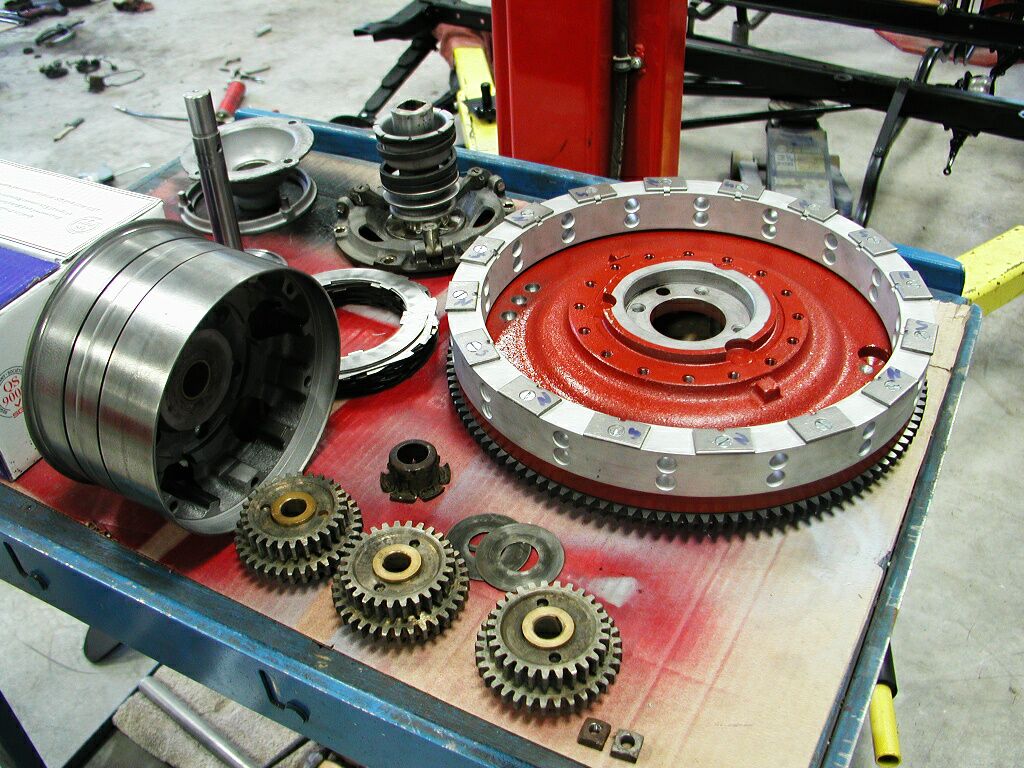 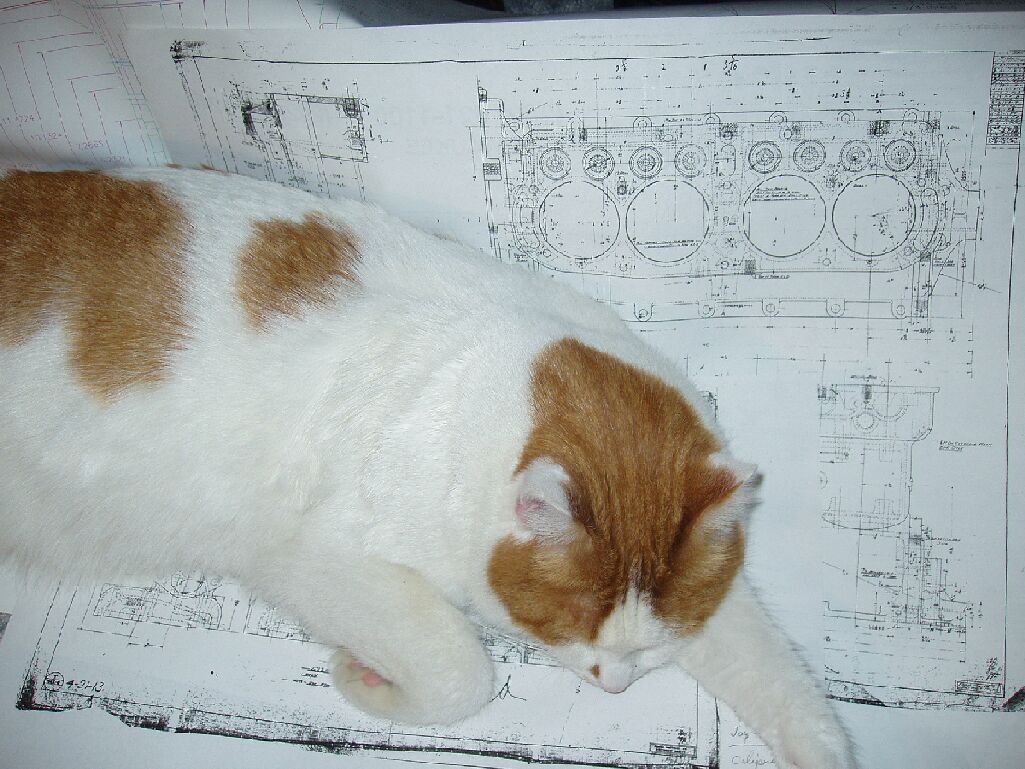 Bill, does that thing spash enough oil all by itself? Do you have a shot of it all assembled?

Erich
I thought about that a little too and that is why I drilled the holes as the oil returned from the pan I felt it would get inside the ring then spin out and run back down the back of the motor dropping in the funnel. also the starter gear throws alot of oil I made the mastake of starting it with the cover off---not good!!
This motor was an original block with a size crank about .0015 out of round mains and rods I bored the cylinders put net pistons and valves pulled almost all the shims some caps have no shims left and have run it hard for 2 summers. the second summer I had added an outside oiler off the mag post and split intake ports making it a 4 port and added a model A carb. it will runn over 60 miles and hour with stock 3.6 gears. I run it in the SD tour and coming home every day we when out on the high way we run 50 to 55 to beat the rain. Cindy and I would go for and ice cream run or supper every day the weather would permit all summer long. It still sounds good but I don't want to run the egg shaped crank this next summer so I am trying to find time to take it down and rebuild before the MN tour this summer. 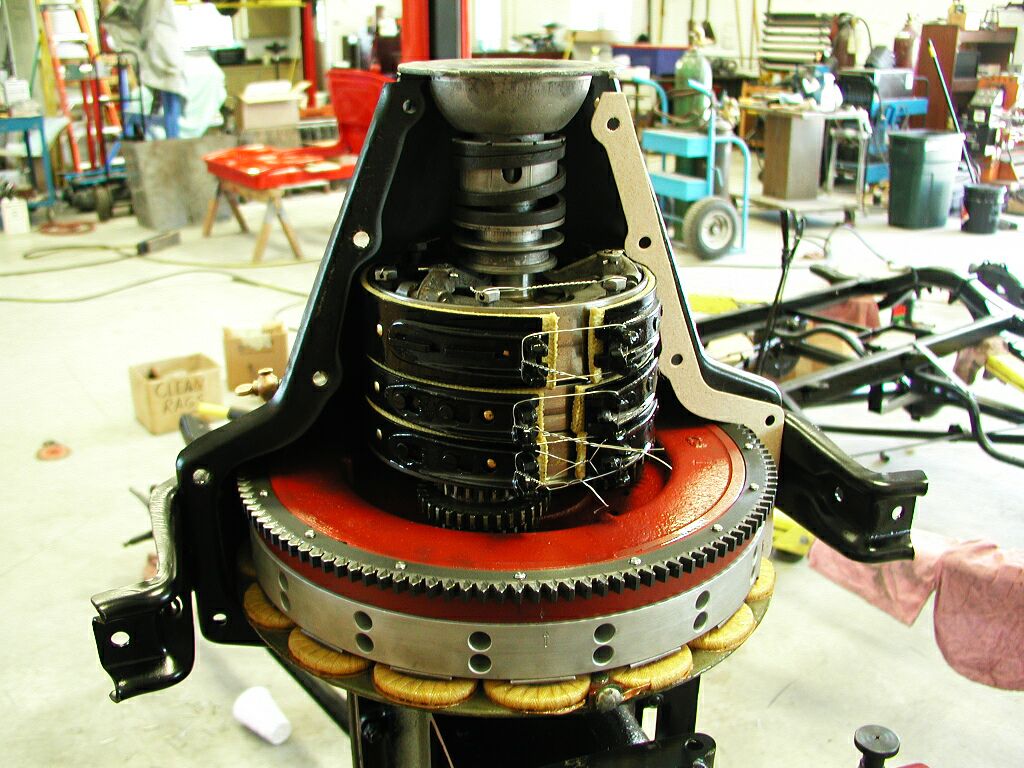 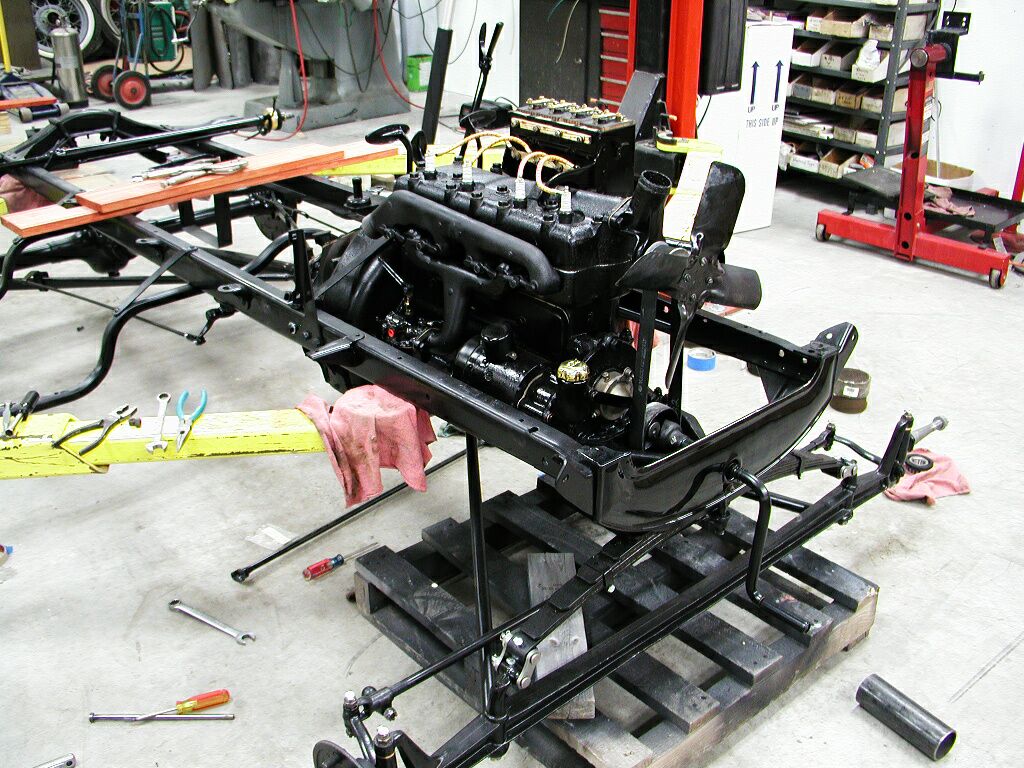 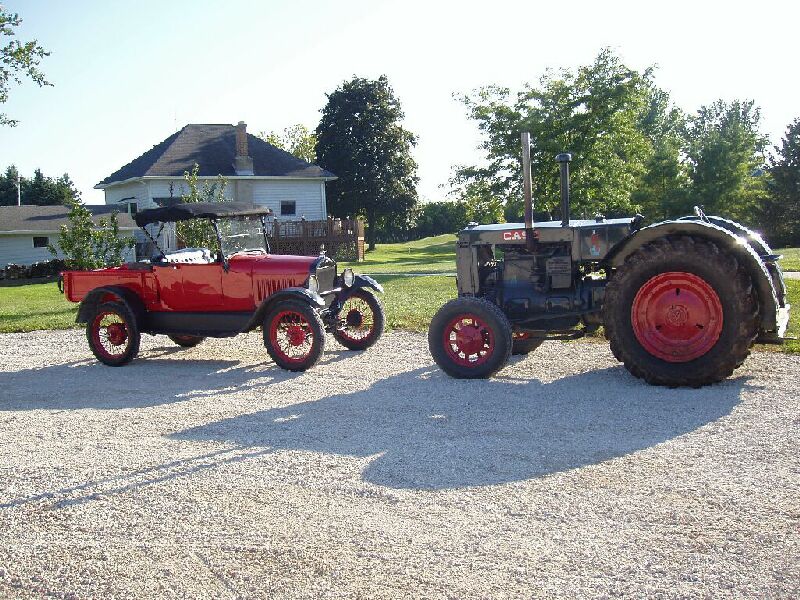 Erich
I do have the crankshaft counter balanced and that I feel does help keep the motor together at higher RPMs but the oiling still has to be there I will most likely cut some fins on the magnet ring when I rebuild now that I know the magnet ring works as well as it did. 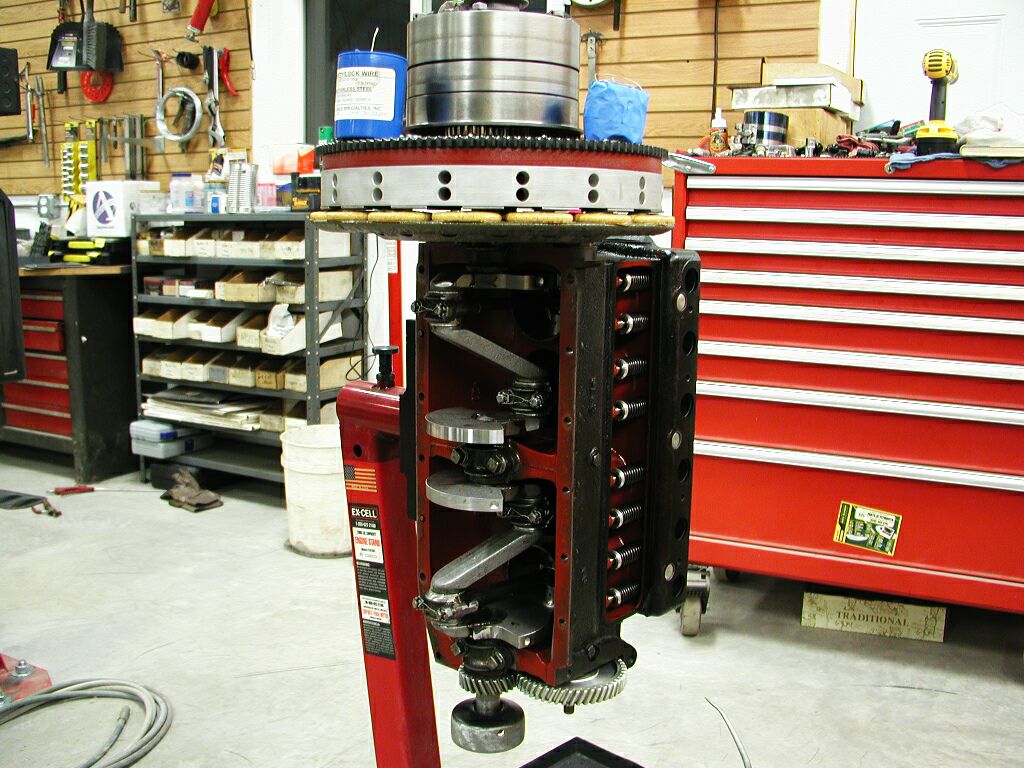 Very impressive.
What's the weight difference between Henry's magnets and the new ones you are using?

I would think the lack of slap by having a smooth ring vs. the standard way would help keep things running smooth. At least every little bit helps.

I can confirm at the Rapid City tour your T ran super fast...! 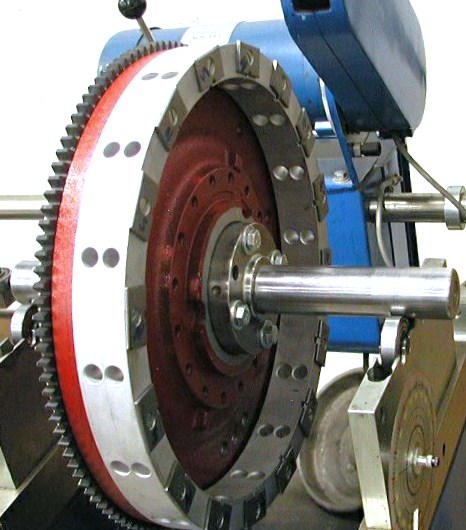 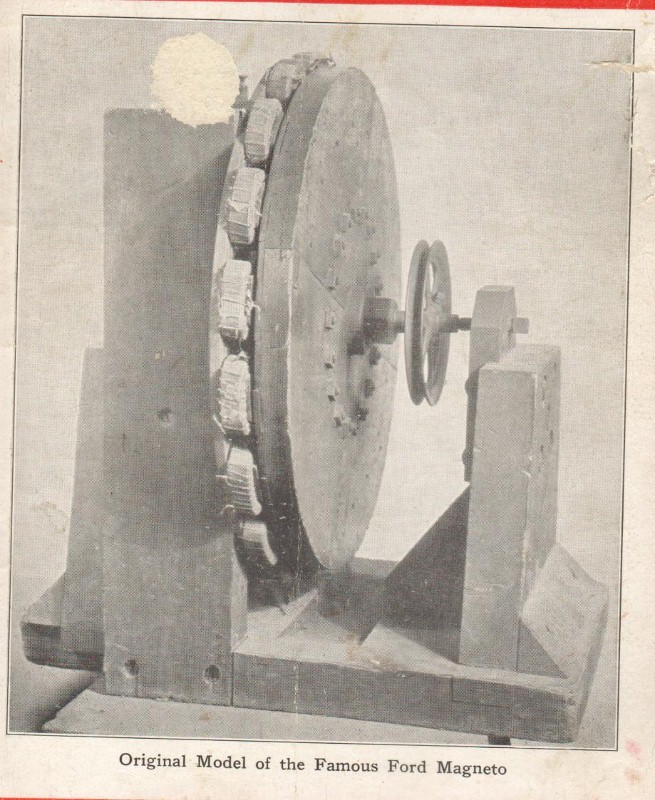 Bill, how are those counter weights attached to the crank? Stock crank to start with? I have to commend your testing completeness. I wouldn't have thought to start it while open to get a visual confirmation of oil splash volume. HA.

One last note, I wish I had your shop, and your know-how. Good thinking and then making it work. Always nice to see how others solve a problem or make parts work better.

Thanks for sharing and keep us posted.

Despite Bills magnets are interesting, lets rewamp this thread and go back to the cracked magnets.
I've got an opportunity to redo some of my overhauling of the transmission I did 2 years ago (Cracked reverse drum) and I have another gearbox contents with flywheel and all I want to use as basis for my new transmission.
How do I check the magnets for structural errors?
The drums I gues I can magnaflux /if I can figure out how to get it around here).

Bill Stipe
Don't know mcuh about cracked magnets, but I fall asleep reading prints too. But then I am not a Cool Cat!

From sixth grade science class: Lay the magnet on its side on wood. Lay a thin paper or plastic plate over it, and sprinkle iron filings on top. Observe the pattern. Don't use steel filings, as they will hold the magnetism.

I guess you could call that self stimulation magnafluxing.

And I've never run a T with magnets.

Michael
Hold the magnet between your thumb and forefinger at the base of the V of the magnet. Rap one end of the magnet hard on the anvil of your shop vice. If it is cracked it fall into two pieces. If not it will ring like a tuning fork. 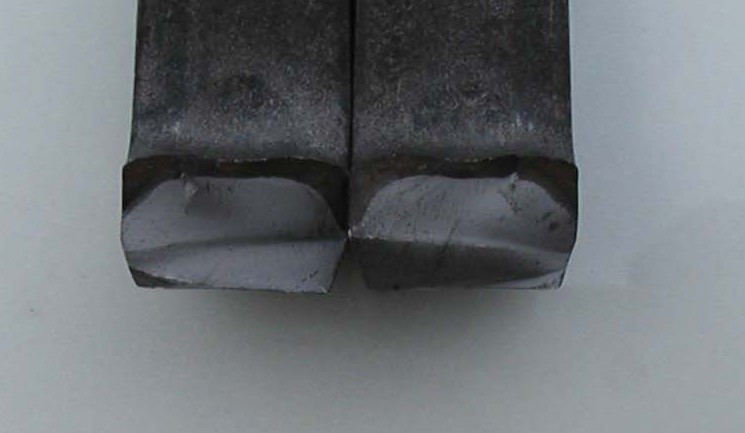 Magnets are really brittle, and will break easier than other metals. What does Fahnestock say on the subject?

The bar feed stock used for making Model T magnets was a forging. The forming tool creating the V could cause stress rises at the base of the V and this is where the cracks could occur. Immediately after forming the magnets were hardened. As you can see in the photo above this magnet has been cracked for some time and failed when checked in the manner I suggested above. When they are not cracked they do not break and sing like a tuning fork. I rarely disassemble a flywheel without finding at least one cracked magnet and sometimes more.
The August 13, 1913 issue of the American Machinist Magazine, which featured additional details Arnold and Faurotte's book Ford method and Ford Shops book could not possibly have included has an excellent article on making Model T magneto magnets.
Ron the Coilman

So.. out of curiousity will the magnet rings appear in the various parts catalogues?

This is what they look like broken One broke and took out seven others. 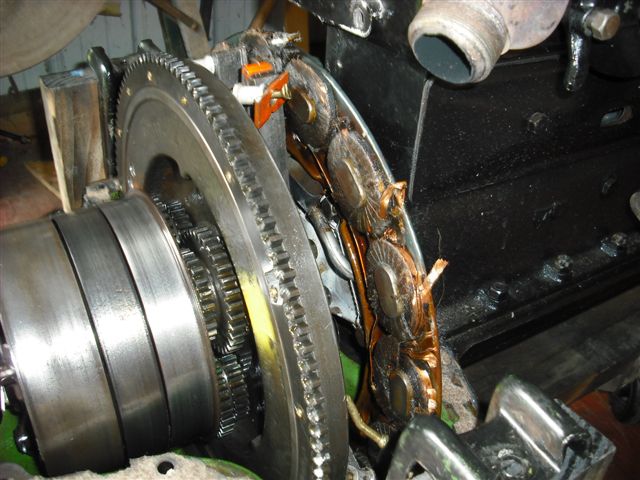 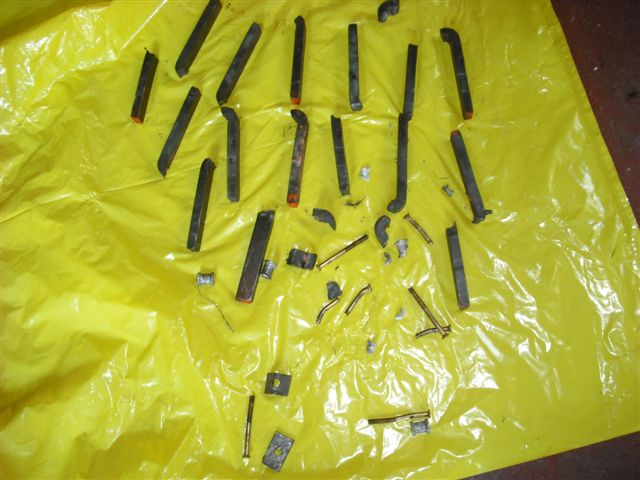 In this particular discussion, you mentioned concern about sufficient splashing of oil as a reason for drilling the numerous holes around the circular part holding the magnets.

Did you, perhaps, also include the set of 4 Oil Slingers (Lang's Part Number 3276SLBQ) in the final assembly of your vehicle?

In your opinion, would the addition of those 4 oil slingers, in conjunction with your amazing assembly, provide sufficient sloshing of oil in the transmission and to the front of the engine? Or, have you found such slingers to be unnecessary, inasmuch as the design of our circular piece with the numerous holes provides a sufficient supply of oil to the front of the engine?

Thank you for consideration of this question.

Your circular magnet design appears to be excellent, because it does away with some many other separate and potentially moving separate parts, much in the same way Henry Ford demanded that the two halves of the Model A carburator was finally designed to be held together with only one central bolt at his insistence. Your thoughts on the oil slingers would be greatly appreciated, as well as whether we can purchase your designed part from you, and, if so, for how much?

Max,
The oil slingers would not fit/work because they attach where the magnets go and that outer space is now taken up with the magnet ring.
Jim

The original magneto model was not shown in the patent drawing that Edward "Spider" Huff submitted in 1908. The patent was not awarded until 1914. 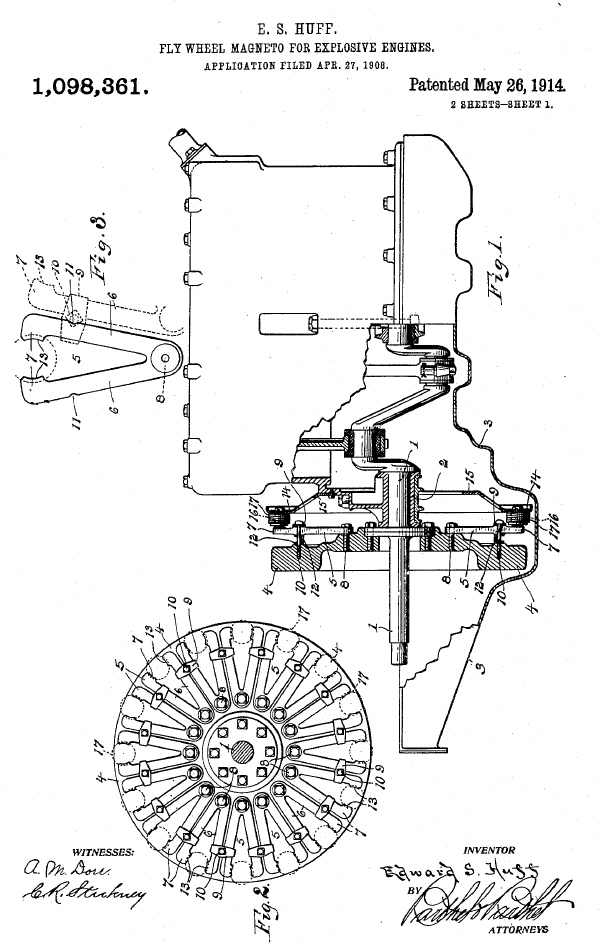 Forrest and Jerri O'Keane were here in Colorado for our annual Leaf Peeper Tour. He showed me pictures of his trani when it blew up on him and injured his face, including teeth. It sure is scary when I think that the average speed going down hill was 70 MPH or better in the Montana 500. I don'tknow what the RPM is with a stock rear end at 70MPH but it must be pretty high. I know the motor sure scream at that speed. As much as I hate taking magnets off a flywheel to check them, when they don't need recharging I think I will start doing it. 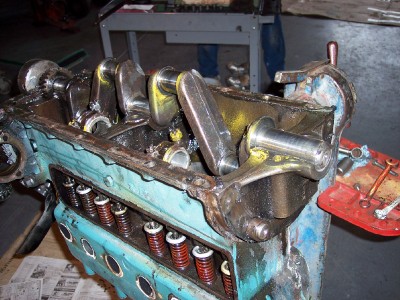 Reminds me of the need for scattershields and transmission blankets in high performance cars.