Since I will probably soon be testing the magneto on my 15 touring, I have been following with interest some of the postings regarding testing magneto output. It seems that the folks in the know recommend putting an 1156 bulb in the circuit to put a load on the magneto prior to checking with an analog voltmeter. So, my question is, if one were to install one of the "Magneto Meters" as shown at
http://www.andersontimer.com/Magneto%20Meter%20Ad%20Sheet.htm
will it provide a reliable reading without the light bulb? Or in other words, is there some component in this meter that serves the same purpose as the bulb?
Thanks
Ken 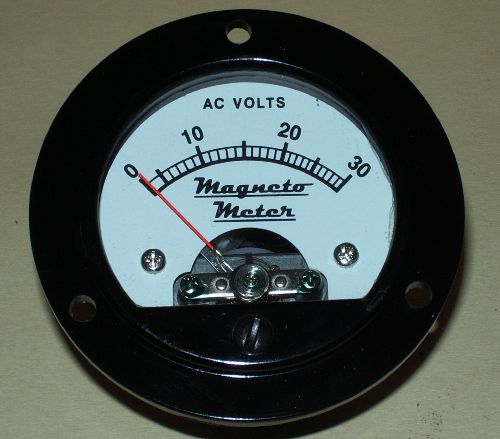 So the meter is in ac voltage, what am I missing,The car runs on dc voltage?

Ken,
The best test is to measure the voltage with a load on the magneto using a light bulb..... or the coils.

Connect a Magneto Meter or AC analog voltmeter from the Magneto terminal and ground. Start the engine on battery and read the AC voltage with no load.

Then load the magneto with either a light bulb or by switching to mag (and loading it with the coils) and read the meter again with a load.

There should be very little difference in the readings....about 5 volts at idle up to 25 volts or more at speed.

The Magneto Meter just replaces the Analog test meter. Some install the Magneto Meter so they have a continuous reading and others attach clips to the leads and make it a portable unit.

One word of caution if you use the coils as the test load... Sometimes poorly adjusted coils can pull so much current that the AC voltage drops when switched to run on mag. If that is the case, use the light bulb for the load.....and get those coils checked out.

Frank, So what you are saying, when using your Magneto Meter, the load will be the coils themselves (if they are ALL properly adjusted for current draw) and the need for a constant load across the MAG is unnecessary. Now I'm really confused. Advocates of getting an accurate reading from analog meters say you need the 1156 bulb in ADDITION to the already functioning coils on the car. That being the case, when testing the MAG for most accuracy, proponents fail to emphasize that the the car should be running on BATTERY. Then the load (bulb) IS required. Why not just connect a load resistor across the meter's terminalsfor a constant load and have a full time, accurately reading meter?

Will
The magneto test procedure that has been floating around this forum for years clearly states; "Connect the bulb across the magneto output and ground while you running the car on the battery with the emergency brake pulled all the way back and set. Using an analog voltmeter check the AC voltage across this bulb as a load".
Ron the Coilman

Ron, I guess I haven't been on the Forum that long to make note of the "running the car on Battery" instruction. While it now makes perfect sense, many others, like myself, have probably overlooked this specific instruction, and have gotten a less than accurate reading. But, as Frank states, "the difference is minimal", and you will get a good sense of how well your mag is functioning and whether you have to look elsewhere for performance issues.

I would guess if you have a reason to suspect you have a problem with your mag you are probably just running the car on battery hence the bulb to put a load on the mag.

Not to further confuse the issue I was the one who suggested that the 1156 bulb as a load made sense because it comes about as close to the load of a single coil as you can find that is also commonly available. The only problem is that the 1156 is a resistive load while a coil is inductive so the 1156 can only replicate a coil when the engine is at slower speed with the magneto putting out less than 12V AC. At higher RPM the bulb no longer replicates the coil so if your magneto is weak at the higher RPM you might not be able to determine that by using simply an AC voltmeter and the 1156 as a load but measuring the magneto voltage without any load at all may lead you astray. The only real way to do it that is fool proof is to measure the AC CURRENT while loading the magneto with a precision inductive load. That is what the hand cranked magneto testers attempt to do with their built in inductor and that arrow that points to .8 amps on the magneto meter. Some HCCT's have the current set at a different point than .8 Amps. The St. Louis Magneto tester that I reproduce uses that scheme but in a small tester that you can take to the car and hook up. The key is a very precise inductor that does not change inductance with varying AC excitation levels. Extremely difficult to do in 1916 and still not easy even with modern stuff. The St. Louis Tester was a marvelous device and works wonderfully to tell you exactly the condition of your magneto and the reading is independent of RPM. It includes the load via the precision inductor and measures thus the quality of the magneto output power. That sort of test is the only test that relies on the tester itself to give you the GO or NO GO test of a magneto. Other testers that are simply AC voltmeters and of course much cheaper - rely on you to compare the readings you get with readings taken with the same meter on a known good magneto. If one had a car with known good magneto then why not just plop the coils in it to determine if the coils are the problem or not. The only tester that can give you a stand alone test to determine if the magneto is OK is either a St. Louis Electric works tester or an HCCT that has a working inductor still in it. Unfortunately the inductor that was in an HCCT may not be any good any more and without it and knowing what it was - no duplicate for it can be made to thus return the calibration of the original to the HCCT being restored. The on board AC Voltmeter will usually indicate to the owner of the car when the magneto voltage is "not like it was".

There is a problem with the 1156 bulb if your Mag is good.

You only get one quick test and the bulb gets real bright and burns out.

While you don't know exactly what the meter reading was, you know you have a good Mag.

There was a rumor going around that John Regan had some of those inductors. They are good for more than one test and might be prefered.

I asked John at Hershey and he said e-mail him when he got home. I e-mailed him and still don't have an inductor from him, but I did find another source.

I do a lot of Model T electrical trouble shooting, most related to successful magneto operation with original ignition coils.
I have one of the St Louis magneto testers, love it and use it all the time. It is a well built piece of precision test equipment and as John pointed out gives a clear and unambigious go/no go indication of magneto health. Here is a link to the information and photo of the St Louis magneto tester. St Louis Magneto Tester
Ron the Coilman