Recently, a Ford script oil can with what appeared to be decent, usable copper plating was auctioned on Ebay, #260726172369. Because of its condition (color), I bid on it and was the high bidder at $42.00. When I received it from the seller, I received a can that was very tarnished and had most of its original copper plating worn off. I can't see any way it could be the same oil can. The seller claims that it is and will refund my money if I return it, after I reminded him that it was covered by Ebay's Buyer Protection plan. I will post a picture of the can I received as soon as I can. If you can still view the auction ad, then you come to your own conclusion. Moral is, Things aren't always what they appear to be. Seller's Ebay name is scottketch71.

I've copied the photos from the Ebay listing of the oil can you won.....for comparison. The seller stated if has its 'patina' !


A true barn find! I found this in an old barn. A vintage original Ford accessory Model T or A Ford script oil can. This is in great used condition with no damage and nice aged patina. This is 5 1/2 inch tall X 3 1/2 inch wide. Look at the pictures and ask questions. I'm selling as is no returns, unless an error on my behalf. 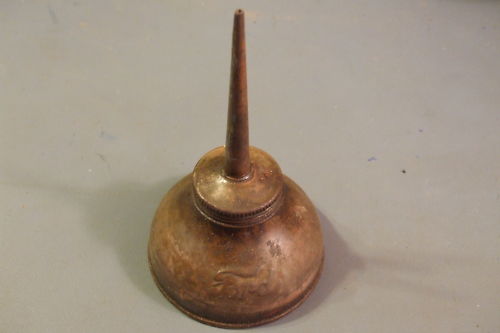 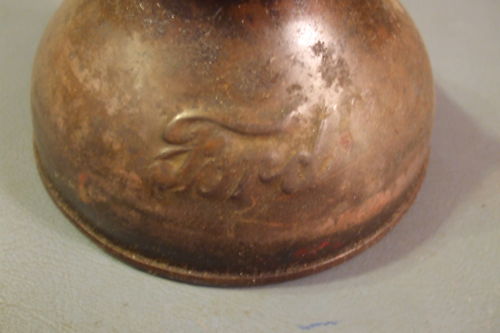 It looks like a rusty oil can on my screen. I have never seen an original copper plated Ford oil can before.

Just above the D in Ford, there is a very distinctive corrosion mark. If it is not present on the can you have, then you are being scammed by the seller. If it is there, then perhaps the flash caused the copper surface to appear differently than when not under a bright light. Just becareful. Anyone who would pull a switch-a-roo on what may be a very valuable original oilcan, would also claim that he never received the item, or that the refund he sent must have gotten lost in the mail so, if you find you have been duped and decide to return it, make sure you insure it and that the receiver has to sign for it and that he pays you by Paypal, then report him to ebay. Jim Patrick

Thanks, Dan for copying and posting the auction pictures. Here are pictures of the can that I received. You be the judge. 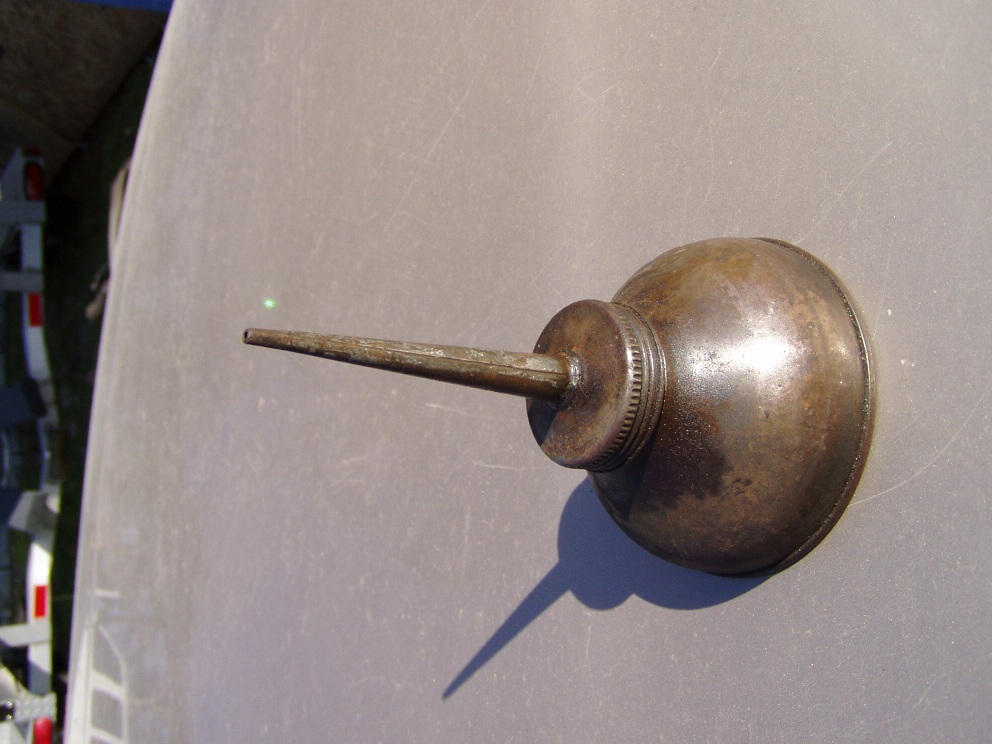 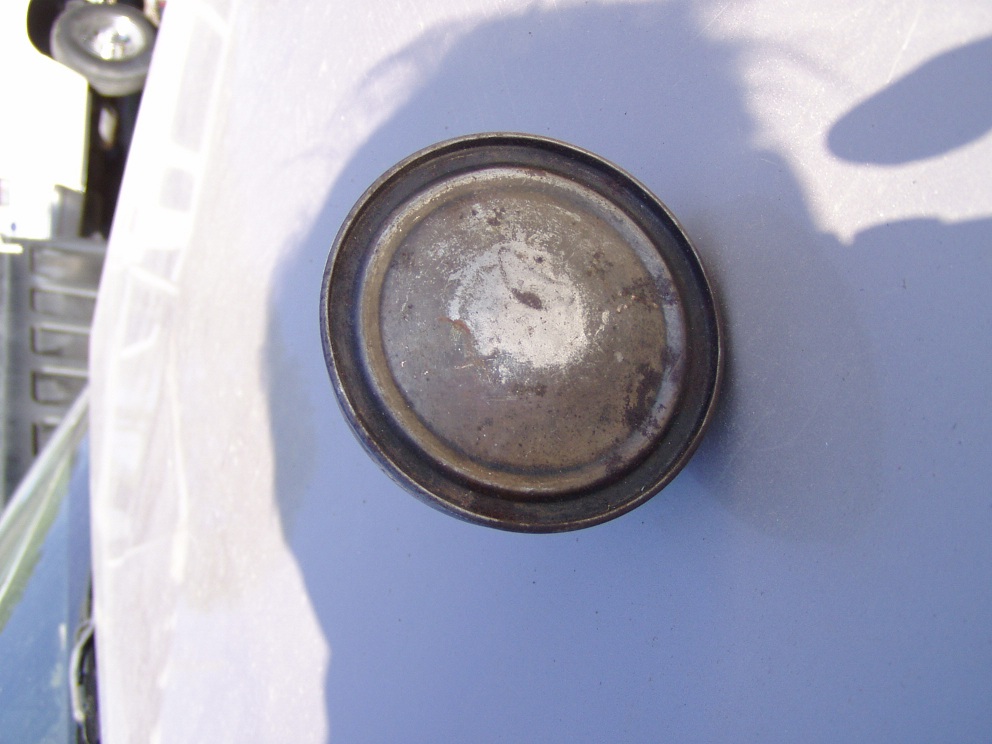 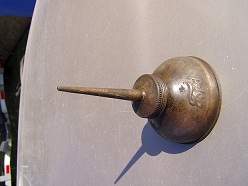 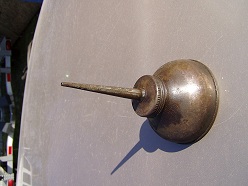 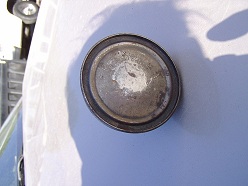 I see a distinct patch in both pictures over the Ford. A bigger pic of the one you recieved would probably show the same patch. Light and flash will change the color of items a lot ....

Well, regardless of how one judges these pictures, the fact is that I would have never paid $42.00 for a can in the condition that I received it, and I think that if other interested bidders had known what they would receive, they wouldn't have bid so high, either. I have two other cans besides this one and one is in better shape than this one. Not as good as the auction photos, but better than the one that I received. Also, I never expected a perfect high point can, just one good enough for a driver. If buying an oil can on ebay, beware. If anyone desires more information about this transaction, send me a private message.

My .02 is pretty much the same as Jim Patrick. Unless you can line up some wear marks conclusively in the before and after. Unless the guy is nice, and doesn't want a negative feedback and unless you can prove a difference, he's home free.

What you might have gotten into is one of the problems with E-bay/photoshop/and the like, coupled with another anxious bidder who thinks the same as you!

Sharing a story, once upon a time there was an absolutely perfect set of E&J number 8's, lot's of pix, flawless and perfect, perfect seller rating record. Simply put, they were going to be mine once they posted! A well known professional T restorer had the same idea as me. Probably the highest price paid ever for a set of E&J, but they arrived a few days later at my house in a box. I was happy and fine with them, they were in fact about as pure a set as I've ever seen, like in bolt right up, none better. One day I was doing something else with a refrigerator magnet as there was a fatigue crack in the cowl sheet metal that now exposed small tack nail heads in cracked paint circle of a prior fix tht I was never aware had been done and I was trying to see if all was primer filled, or was there old filler, meaning how deep. By accident, the refrigerator magnet leaned into the bezel on the left cowl lamp and caught my eye as being strange. Yup, it stuck on the bezel and did so on the bezel on the right also!

OK, so I refitted real brass ones that were also just as good and now they are in fact totally perfect. But did the guy scam me? Will never know...other savvy e-bayers told me, I just ASSUMED it was brass...on me!

There is a silk purse in that sows ear...picked up a decent looking Hack last fall...had tired cowl lamps on it...dug out that box of leftovers from about 8 years ago, the brass plated bezels sure do look nice and it's a Hack so hey...that works on adding some 'punch'

As I stated in my original post, the seller emailed that he would return my purchase price, despite the fact that his ad said no returns, if I returned it. I will, taking the precautions that Jim Patrick advised because Pennsylvania is too far from Texas for me to make any personal appearances.

Terry, I just bought an oil can at about the same time you did on e-bay for about the same price. Have not received it yet, but I will let you know the condition of it as compared to the photo. Photos can be deceiving, but for $38.00, I can always swap it or sell it and not be out much money. Most sellers are great to deal with, but the ones that don't have a clue about the items, need to be kept honest with our feedback.
Good luck

I can detect no color variation in either pictures. Did it look more copper colored on your monitor?

I'd say the seller is going above and beyond to refund your money. It is nice to hear (what seems to be turning out) a good e-bay story.

Update: seller has refunded me my purchase price of the oil can that I returned to him. All I am out is the original shipping fee (he charged much more than the actual postage charged by the Post Office) and my return postage which I sent by Priority Mail with return receipt, to speed the refund. I won't be buying anymore cans on Ebay because I already have three that were as good as the one that I received from him and all need copper plating to be decent.

While on the subject of cans, what is the difference between the small script cans, the large script cans, and the cans with an "E" on the opposite side from the script?

Can't make pics due to copyrights, but can say large F script were made by Maple City Mfg, the 'E' on the others denotes Eagle Mfg, and its claimed there are 7 different kinds of T oil cans and no two are alike

Only the early cans for the early brass up to about '15? used the internal'bayonet' means instead of the usual screw cap. Those were mfg by Noera and have pat date of 1908. 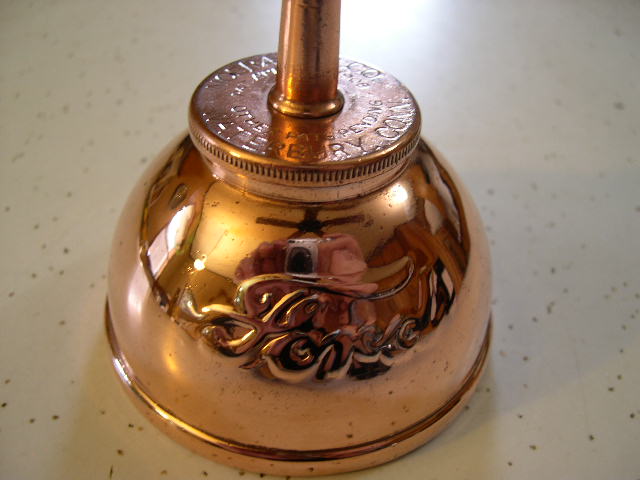 So...you have a good start for a collection

This is my Noera can. There are differences in them as well. The printing on the lid is smaller than Mikes and the Ford script is different. 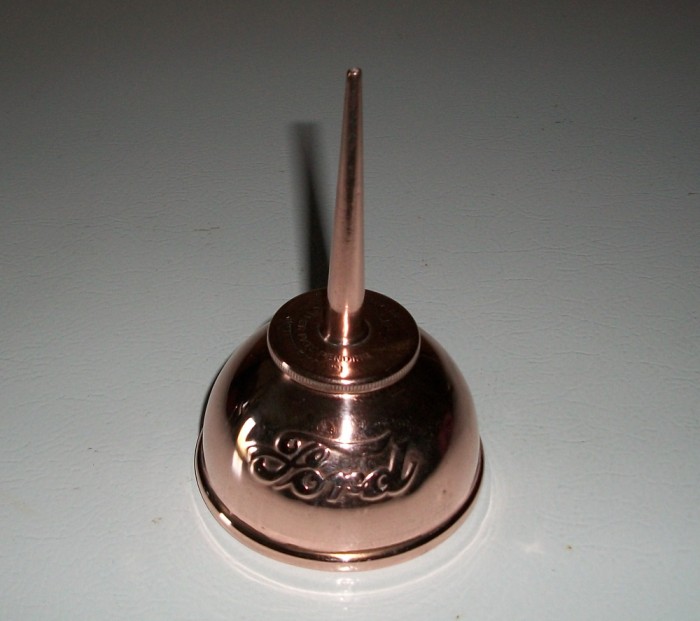 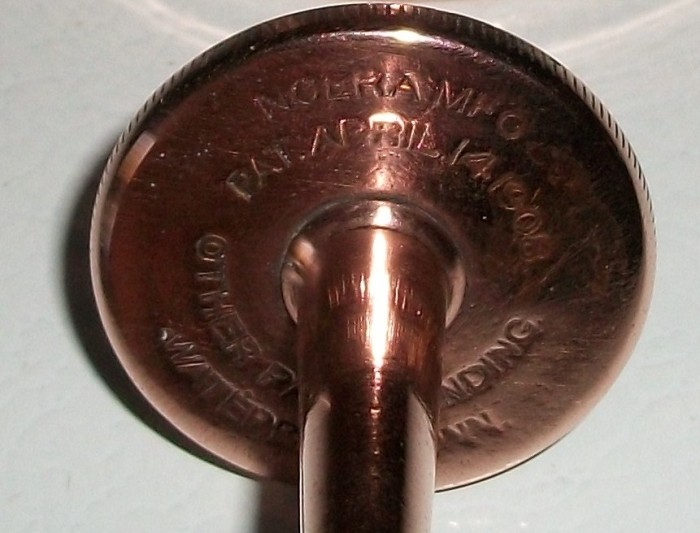 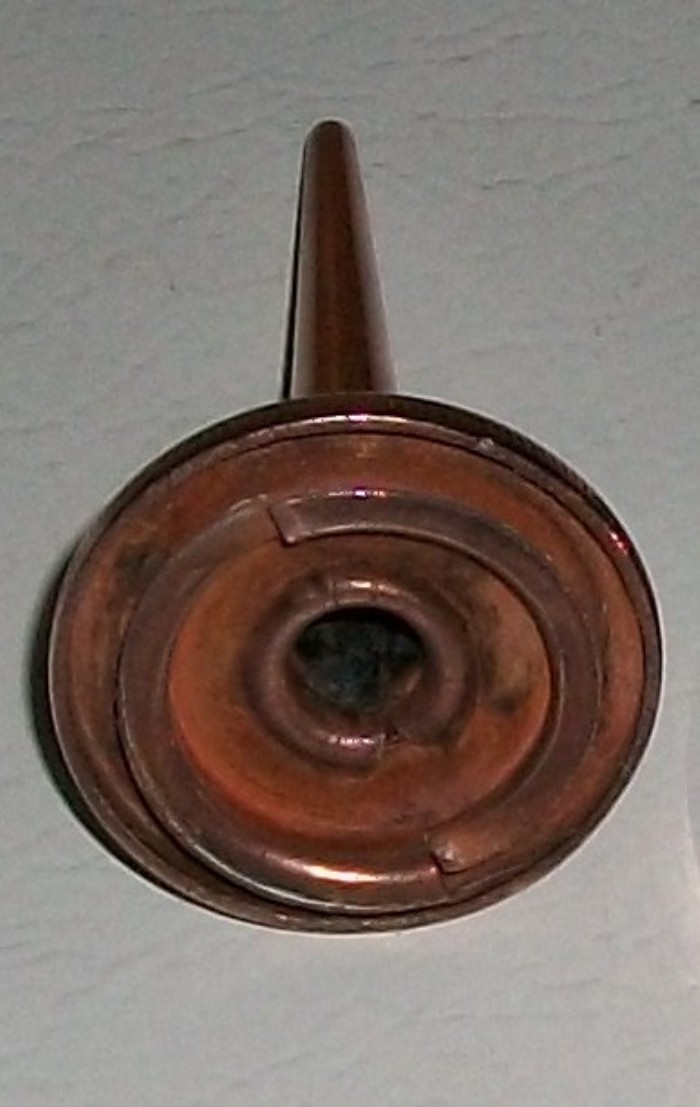 Here are a couple more variations. These both are NOERA cans, and both have the Apr. '08 pat. date. 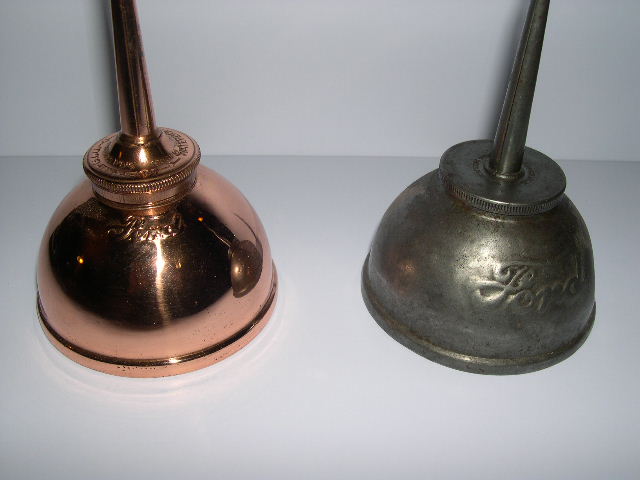 The one on the right has the same bayonet spout base as the others pictured in the posts above, and it has a very tiny stamp with the Apr. 14, 1908 pat. date and "other pats. pending", but no NOERA name or Waterbury Conn. 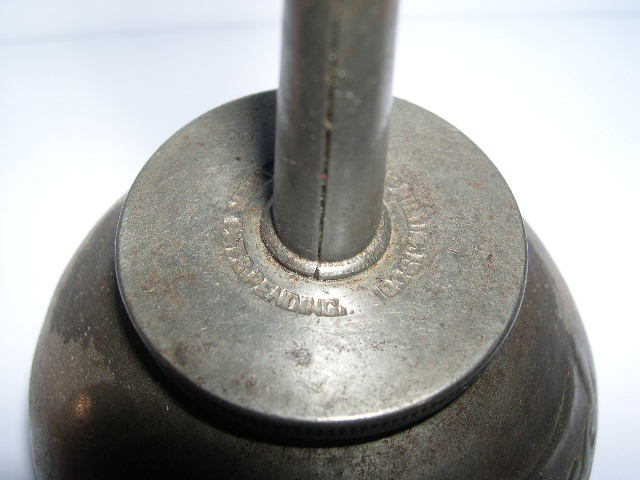 The newly-plated one on the left has very small Ford script and all the same info as the ones pictured in the above posts, but has a much smaller spout base, and it's finely threaded to go on the outside of the can's top. 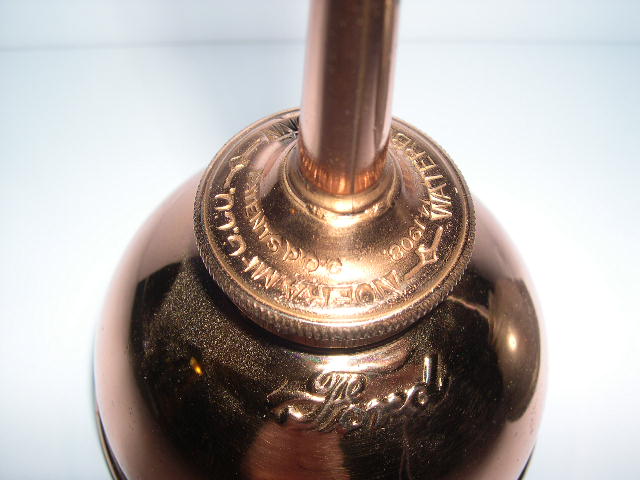 I should remember to wipe the dust off things before I take close-up pics of them.

I have a dozen or so of these '08 NOERA cans, and only one each of these two types, and only one with the large stamping, the one Dan posted. All the others are like John's. It's too bad that no one now alive can tell us more about the different markings and when they were manufactured.

Mike, That last one is sweeeeet! Is that one reserved for the Couplet?

John -- One of those newly-plated ones is; I haven't decided which. But I'm thinking that the last ones pictured might have been earlier versions closer to the '08 patent date, so the one Dan pictured probably is more correct for '15.

Again, it's too bad nobody knows more about them. We can only speculate, but I'm thinking that the more scarce versions probably are the earliest trials, and the ones like yours and most of mine probably are the design they finally settled on.

That makes sense Mike. The Fancy one probably would have cost a little more to produce.

Is that gray one Cadmium plated?

I'm thinking the same, those Noera with the bold large scrip and the fine thin wide bayonet cap are likely the early versions for the early cars,

A like one is shown with tool kit on display with an award winning 1911. 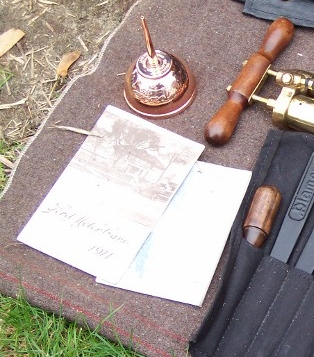 Terry, It's a pretty simple trick in Photoshop and likely in just about any 'cheapo photo software' that comes free with most digital cameras these days. The seller pushed up the tint and the saturation levels to make the object more coppery. I could take some of the posted photos here and also make them look to have a fairly convincing nickle or brass finish just by sliding some levers in about any photo enhancement program (pretty basic stuff). Sorry it happened to you but it sounds like you'll get your refund. I make a small living (retired)selling old motorcycle & Model T parts and other antique thingies on ebay but my 100% perfect feedback rating is the result of clear, honest photos and honest descriptions. eBay seller ID = Picklehaus

Terry: He's waiting for you to return it so he can send it to Skip.

Still can't figure how that bayonet lid works. Any other shots that make it obvious, or a crack at splainin it to me?

Erich, The base is just like the lid. The lip is just a large thread only about one turn tightens it. If you were ever around Cannon 35 MM cameras they had bayonet mount lenses, same principle. 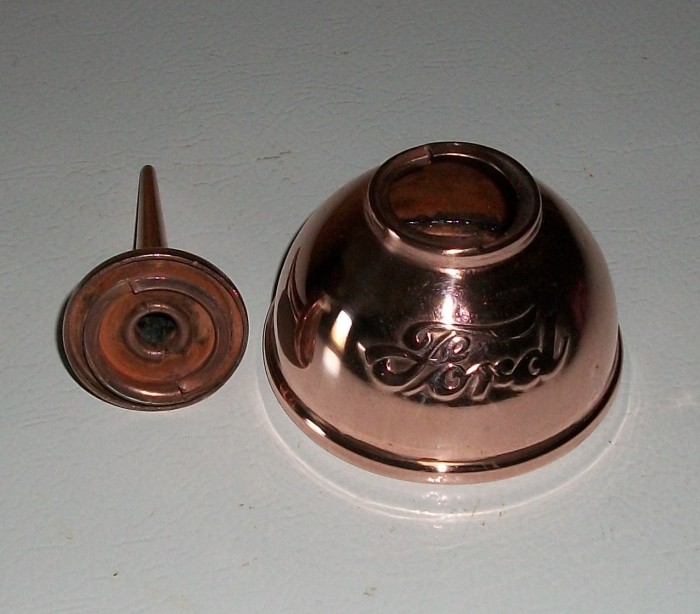 Thought I'D Add this link from a past post here.

Art -- What's odd about that patent drawing is that it doesn't look like any of the can spouts. The NOERA folks must have figured that they had a lot of leeway in the details covered by that patent.

BTW, some folks have asked me where to get cans plated. Ken Kopsky, who is a regular poster here, did mine. I think he did a great job.

John, Thanks a bunch. That picture makes it all clear. I can see now how it functions. Looks like a very effective system. So many of the screw top type get dinged up threads on can or lid or both.