In reading through the model T encyclopedia, in particular the section on ignition keys, what is the "pin frosting" that is referred to? Would someone have a photo of that they could post, versus the later key without the "frosting"?

I suspect that it is the very rough bumps on most of the original and even the repro keys. Most of the rough spots are often worn off on original keys. I am going to try and send you a picture of two keys the one on the left has the rough spots, the Key on the right has been worn smooth. 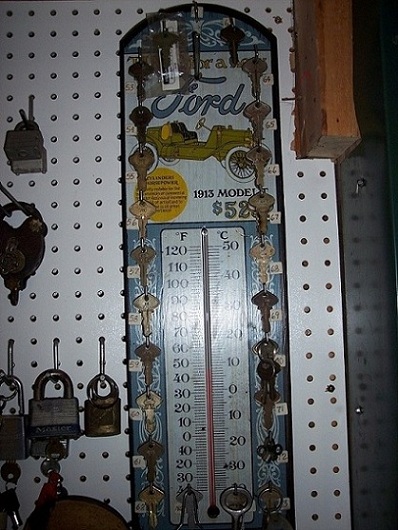 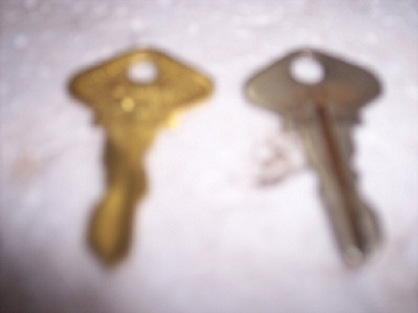 So pin frosting is another name for poor casting.

Charlie,
NO! It is a term for a surface texture, was not used on all the Ford keys, and I don't know if that's year or manufacturer difference--but I'll bet someone here does! The textured area is somewhat recessed from the edge rim.
T'
David D.

I had thought that was what the "pin frosting" was, the small bumps. Part of what made me question this was the Model T Encyclopedia section on the keys. It was said that in January of 1920 the pin frosting was dropped in a cost cutting effort, and the background was smooth there after.

I have not spent a tremendous amount of time collecting model T keys, but I always seem to find more of the pin frosted ones rather than the smooth ones, keys that have been worn smooth not withstanding. If the pin frosted keys were only used from April of 1919 to roughly January of 1920, why are there so many?

Did the suppliers keep making them the same way (with the bumps/frosting), rather than re-tool for the smooth design? Just trying to sort out some question that I have, thanks for the posts, and if anyone has more info it is always welcomed.

Dave tell us more about that thermometer!

Perhaps the term 'pin frosting' is unusual for that description, I would think 'stippling' or stipple finish would be best to describe those keys.

Many I have show a stipple finish. 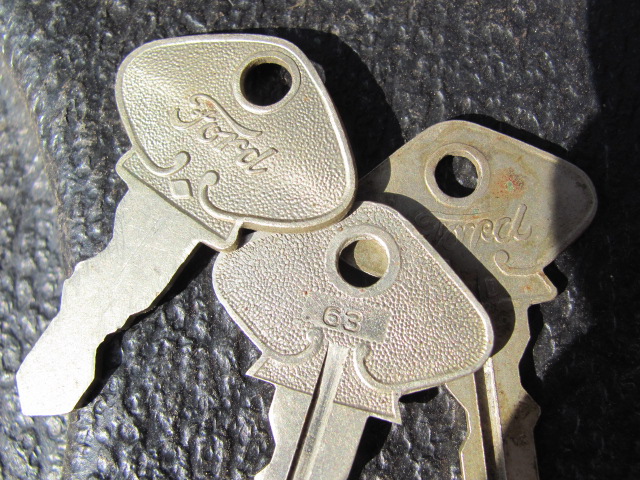 The key on the right shows a plain finish, the others have the dot like engraving on the tool work used to impart the finish effect.

Pin frosting is when the coded pins inside a lock becaome sticky or non-functional due wear, dirt or rust. As a key is pushed into the chamber the spring loaded pins need to move to allow the passage of the key. The correct height pins also need to fall back into place against the corresponding heights on the key to enable the barrel to turn. See diagram below...Dave Chantrell, Workshop Manager, Metropolitan Locksmiths (Adelaide, South Australia).

I forgot to mention that most ignition locks including the 'T' are a wafer lock, not a pin lock. Same principle, flat spring loaded wafers have to move instead of pins. In a Ford 'T' lock the barrel is diecast rubbish and swells over time with rust causing it to "seize".

The best lubricant in both types of locks is a dry silicon based lubricant such as a clothing zipper lubricant, NOT graphite. Althought graphite is a good lubricant by itself nealry everybody squirts in some kind of penetrene spray creating a black, gooey, sticky paste. Silicon spray is just as effective and clean. Dave C.

Dan,
The key that you show to the right in your photo, is there a manufacturers mark on that key? Might that be a Ford made key, without the stippling, pin frosting, pattern, bumps (whatever the heck it is called)? I would think that stippling would have been a better lable than pin frosting. I would have known immediately what they were talking about.

The key in the center without the stippling is a C-D or Casey Dupree (sp?) The one shown on the right is also a C-D but it has the stippling, (which is somewhat worn from handling), as well as the B (Briggs), on the left, which has the stippling or dot pattern on the finish.

Thanks David. Mine is kinda sticky and a bit obstinate. Now I know what to do to help it.

You asked about the thermometer. Many years ago my daughter gave it to me for my birthday or chistmas. I needed a key board so I added the hangers and posted the numbers and have used it for keys. Every once in awhile a walk in needs a key but mostly I just use them in my cars.

Side Bar: One time at a farm auction with some model T parts there was a box of 300 original T ignition keys. I put in a couple of bids but was outbid. Sometimes I wish I had bid higher.

I have a thermometer just like that, I think my wife found it at a local yard sale about twenty years ago. I recall them being advertised in many car magazines years ago. I think I saw one a few years ago in an antique store. Dave