When I bought my unrestored 1925 Tudor sedan it was missing a roof and visor. I recently bought a visor frame at a swap meet but not the mounting brackets (if such things exist). Does anyone know how to mount the frame to the car? Flat frame size approximately 41" x 7" with a couple of holes at 41" across that match the 41" across the holes in the car body. I can't locate brackets anywhere. I also just purchased a new Cartouche visor cover which fits well on the frame but without instructions i don't know what to do with the open side of the pocket and excess fabric. 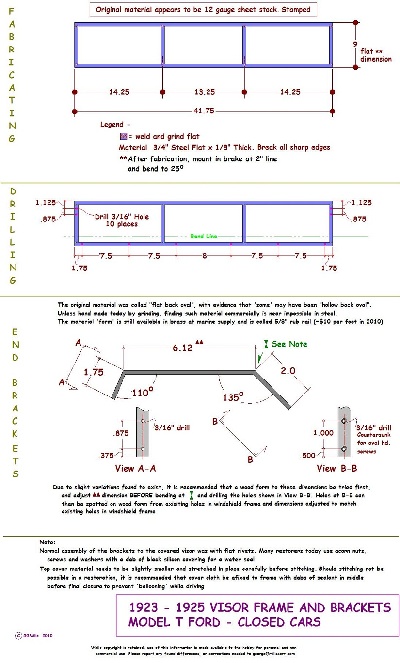 Thanks for sending this, George -- looks like it's exactly what i need. I copied the image and pasted it into MS Word and i can stretch it enough to read the text.


As i said, the car has no roof or visor. Can you (or anyone) refer me to the same kind of plan details for building the roof? I already have the oak bows that i had someone cut from a pattern, but i need to know where they are placed and how to attach them to the top wood frame. I also bought the Cartouche top replacement kit, but i need further instructions for installing it (e.g.., use chicken wire or wood slats to support the fabric? Install new headliner before or after the new roof? What kind of sealer to use?)

David,
I installed a new top and headliner using a Cartouche top and headliner kit on my 24 coupe.
To each is own but beforwarned that the new top goes on LAST.
The top wood bows go in first but some may do the bows after the headliner. Coupes have the wood bows that are attached to the top wood frame. Mine were screwed down on each end of the wood top framework. You should be able to see where they go as the top has routed or cut out places for the slats to fit into.
The headliner goes in next. After everything is stretched and tacked in then the chicken wire goes over the wood slates and tightly drawn to a tight and flat level.
This need to be tightly installed so to give your new top a nice and flat area to lay on.
After the new top is evenly drawn down tightly and tacked you trim out the edges using the hid-em welt. You simply hold open the welting and tack it down evenly around the roof line for a neat and straight appearance.
Thats generally how the top and headliner goes on. Ford didnt use chicken wire I dont believe and some purists wont either but it makes for a neat appearance I think.
Others on the forum may differ in ways to do the installation but generally its done this way. Just remember to install the top LAST.
To each his own.
Hope this gives you and idea.

David, Here is a scan of the framing on the 1924-25 Tudor. I have a 1924 Fordor that has similar frame wood. I will also attach a Link to installing the Headlining. instilation. 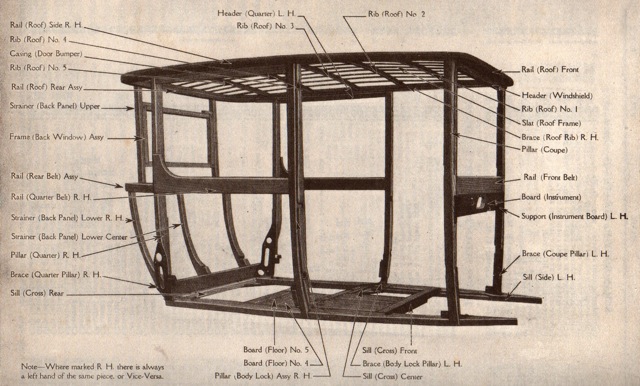 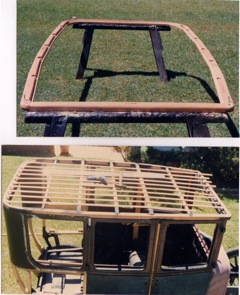 To each his own, I do not use chicken wire nor the foam that comes with most top kits. A good heavy fabric streched over the slats works well along with a felt pad of about 3/8 thick. I personally do not like the cartouche material as it it to stretchey and will balloon up while driving. LeBaron Bonney makes a good material though it may not be correct to the original material. Just my opinion. Have fun, KB

Like Keith, I didn't use chicken wire. I studied every original picture of the Closed Cars I could find before I committed to doing the Top. My observations were that there wasn't a lot of padding on the tops of the original cars. Some pictures you could almost count the slats on the framing of the cars. I used what we call here in Australia ( Unbleached Calico ) which I suppose is like a very light duck material. I stretched it across the slats and tacked it in place giving a good firm background for the next layer a quite thin Dacron Wadding about 3/8 thick the same as Keith's felt. This also was tacked in place. It gave a nice shape to the top without making it too puffy. I think a lot of restorers make the mistake of over filling that layer. The last layer was the ( Long Short Grain ) Top Material, which I had shipped to Australia by Le Barron Bonney as we couldn't buy material here that would cover the whole top in one piece. The rain gutter and the proper Wire Welting on the Front and Rear is another important part of the whole process. The job has stood the test of time, having been done now since 1987. We have trailered it and driven in quite wet conditions from time to time with no leaks.
Very best regards, John 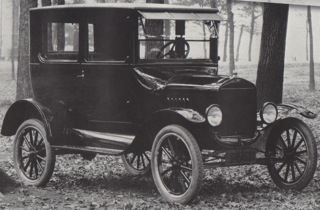 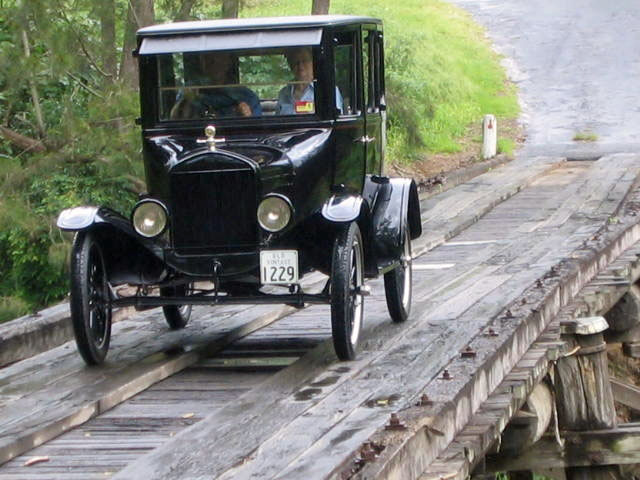 I know that this discussion has moved on since June 17th but I thought I would add this little bit by way of explanation of my last posting in regard to the Top padding . This Shorpy picture is an excellent example of just what little padding the Closed Cars had on the tops. The picture was taken in 1928 , so the cars are relatively new, and the tops should be pretty much as they left the Factory. Here is a link to the High Definition Picture.
Best regards, John

Close up of one of the Tudor's 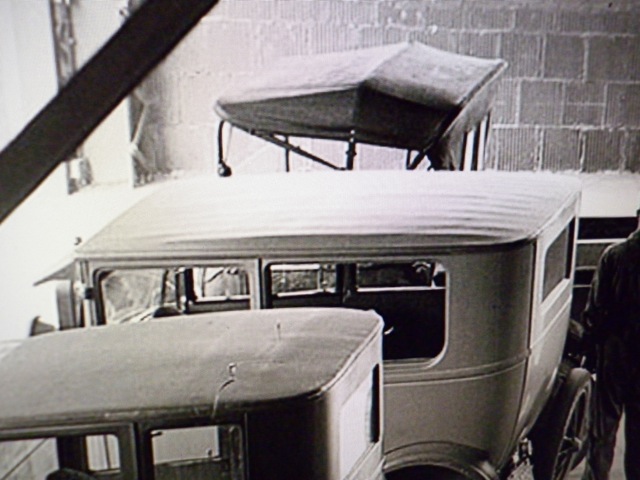 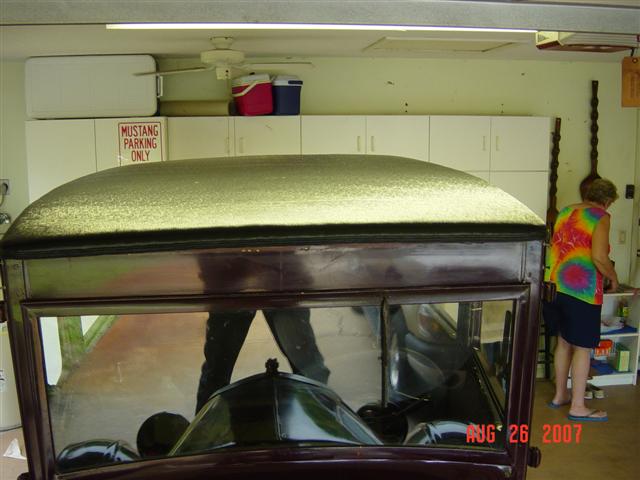 I would imagine that the chicken wire would keep the top smoother over a longer period of time than some type of fabric would. Its not original of course but it cant be seen either after everything is completed.
Nowdays it depends on how authentic we want our Model T's to be.
Maybe things that cant be seen are an improvment over what use to be used.
I dont think we would use the type of oil in our cars today as was used in the 20's is probably a good example.
But to each his own.