Since 2007, I've had periodic steering issues, with the 1927 Tudor bouncing irratically on the road at speeds above 35 mph. I began by replacing known worn components first. Those that have been replaced are the tie rod balls and caps, spindle bushings, spring perch bushings, (kingpins are fine), triple gears, pitman arm, steering column bushing, steering column rivets; toe-in/camber/caster is correct and the radius rod is not bent.

After spending years ruling out the above, I've deduced that it's a worn ball and cap. In the past, to correct the problem I've peened a quarter and used it as a shim between the ball cap and ball. That seemed to have done the trick since June, 2010 of which I put an average of 20 miles per week on the car.

Last week, the car began experiencing the "bounce" issue again, so I pulled out the quarter, which was well rounded by now, and put in a piece of leather from an old belt. I took it out on the Sunrise Loop, which has a posted speed of 40 mph, and didn't have any "bouncing" issues.

I'm wondering what is the best solution for fixing the worn ball on the end of the wishbone. Some ideas I've tossed around:

• It would seem that the quarter/belt are the cheapest solution and can easily be replaced, but only a band-aid.
• I purchased the expensive APCO unit and it didn't solve the problem - that was a waste of money.
• I've seen the ball that a guy can weld on (I couldn't find it on Lang's site) but wasn't sure if that was the best solution. I'm not a metalurgist, but my concern is that if the replacement is not made of a high quality of steel and done properly, then that's a sign of weakness at a high stress point that could possibly result in an accident.
• I could replace the wishbone with another one, but are there enough good ones around to warrant that?

Any feedback is welcomed! Thanks.

With the Apco unit the ball shouldn't need to be perfectly round - I would at least try welding on some material and grinding to an approximative spherical shape before buying another wishbone..

For a '27 you can still find good originals in the USA - Mike Peterson (gunman63 at eBay) sold a couple to me once, he puts up others for auction regularly.

Pre '19 above the axle wishbones is harder to come by in good condition (or in any condition..)

I've done two repairs
One is with the socket. I had a guy tig weld the hole and redrill with a ball end bit. Its a hard job requiring a full size mill bed and its best to have the pan checked on a jig afterwards since the heat may cause warpage. I wouldn't do it again on a early pan since they are not rigid and move around a lot when you're trying to drill.
Second is with the ball. I welded up the ball with a mig welder and filed it back down measuring as I went with a dial caliper to make sure all dimensions were right. I finished with sandpaper. It takes time, but you'd be surprised how well it can be done. I wish I had a picture to show you, I think you'd be impressed.

Richard and Roger - thank you for the ideas.

Just a thought - how about a product called "QuikSteel?" It's like an epoxy that hardens up and can be sanded/filed. I've used it as a filler, say on restoring license plates, but never on anything that would receive the wear that the wishbone does.

Any opinions on using an epoxy? Thanks.

If a quarter didn't hold up, then perhaps epoxy wouldn't stand either?
There is a risk much of your wear is in the socket.. That may reduce the caster angle, giving you less stabile steering.. Try a thicker cup shaped shim in the socket placed over the ball made out of a better material than the quarter. Check so there is no play & no bindin, the Apco should fix that.

All the part vendors sell shims to take care of this problem. These are old original ones from back in the day but the new ones are very similar. 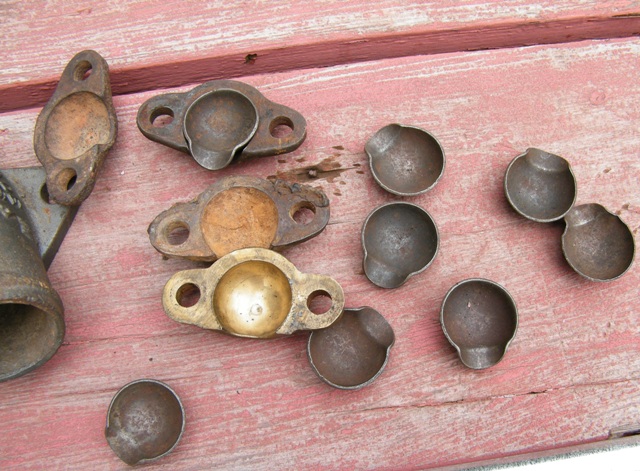 As a dealer of used, NOS, and reproduction T and TT Parts I;ve never seen these pcs before I;m happy some dealers have them

I've been told that the reproductions shims are not of the same quality as the old ones. Would anyone have an old one they'd like to part with? I apologize if this isn't the proper place to post this - if there is a quicker, more proper place to make this request, I'll surely do it in the future. Thanks.

The new shims look much thinner than the older ones shown above.

If the socket is REALLY worn out, as some of them are, you can take a cap such as the brass one shown in Royce's picture above and make a shim out of it. Cut the ears off it and do a bit of grinding and fitting, then glue it in place using JB Weld.

Not sure about the hardness of a quarter. Certainly the leather is far softer. But if your steering problem goes away after shimming the ball you've found the problem and those metal shims could be a permanent solution. Worth a shot.

To answer your question, I have also used epoxy stick in the socket. I did it in the car. I lowered the ball, cleaned the socket and placed the epoxy putty in the hole. I covered it with Saran Wrap and replaced the ball by placing a 4 by 4 under the wishbone and jacking the it up so the ball was up tight in the socket. The excess putty squeezed out and was wiped away. The Saran Wrap kept it from sticking to the ball.
Was it a permanent fix, I doubt it but it seemed to last for a year or two, after which time I sold the car.

Here is an option from an old V.F. article.

Erich, the jig to hold the ball drill bit is an excellent idea.

Here are some photos of wishbone and ball repairs I have done to badly worn parts. The pictures are from two different cars, however I have done both repairs to both cars.

Wishbone ball before repair. The hole in the template is the desired finished size. 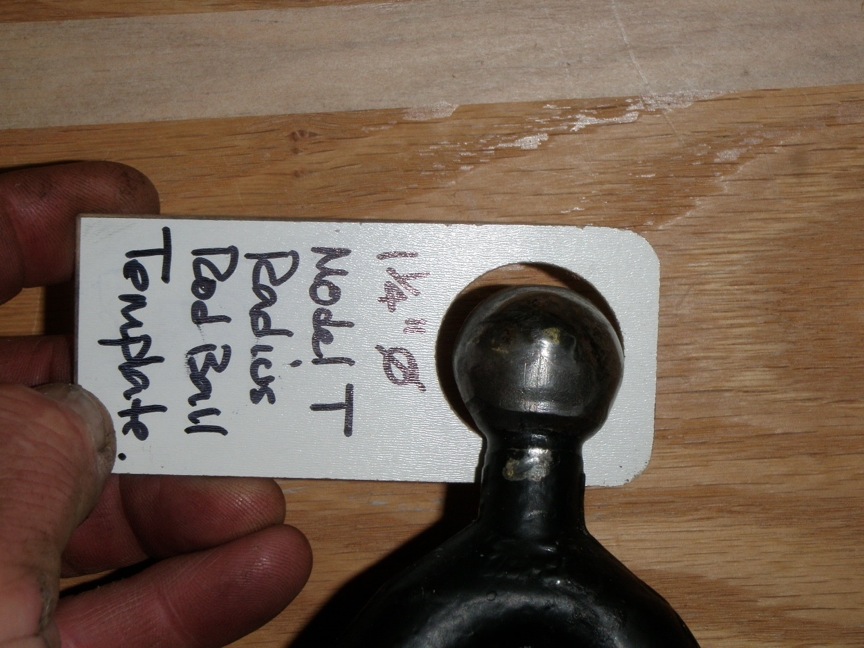 We built up the ball with a Mig welder and carefully ground/filed/sanded/polished the ball to a nearly perfect ball. Sorry, no photos of these operations in progress. 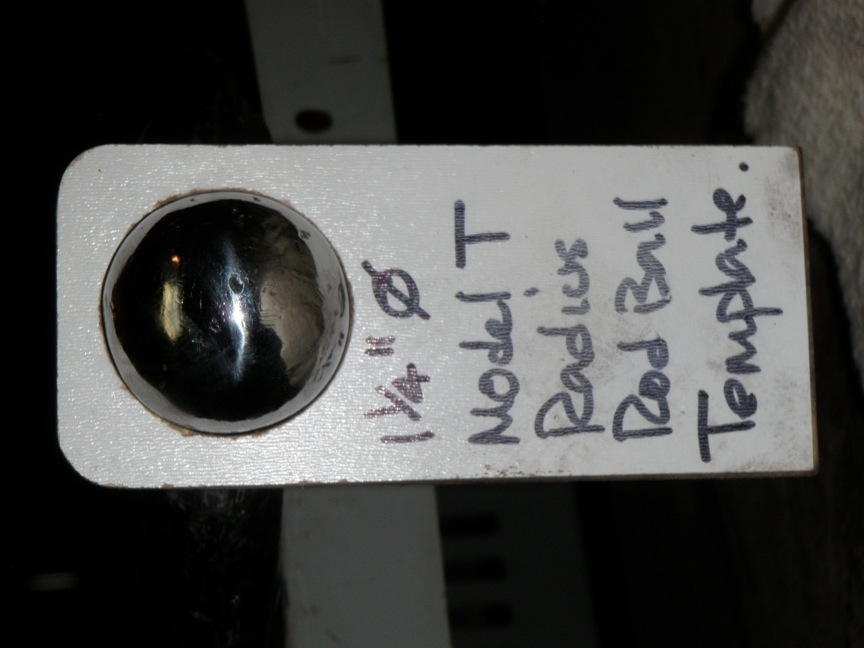 The ball socket was in pretty sad shape.I had a Canadian Loonie (dollar coin) in there as a shim, but the hole had worn too large to be safe. 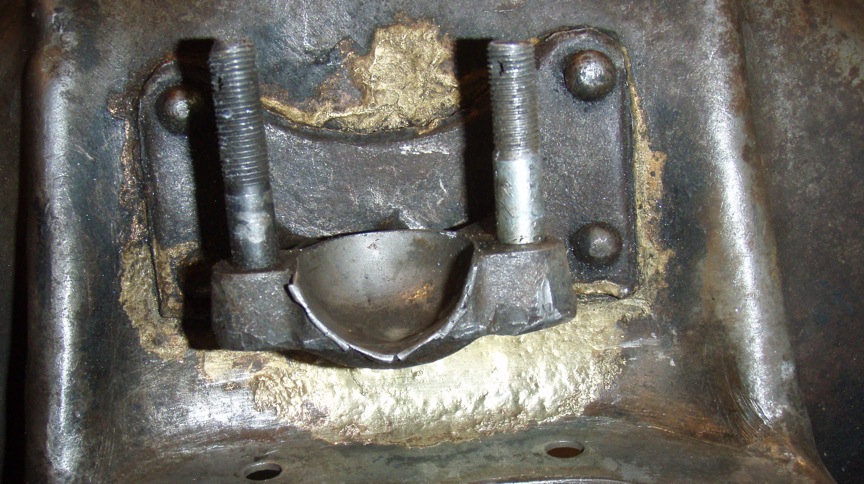 I used a repro ball cap to form the new socket. Here the cap is just sitting over the studs prior to any grinding and fitting. 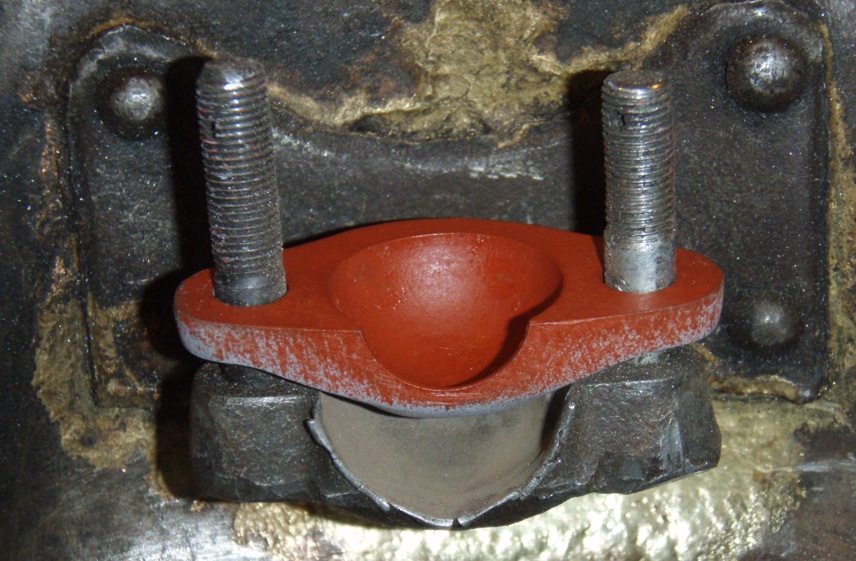 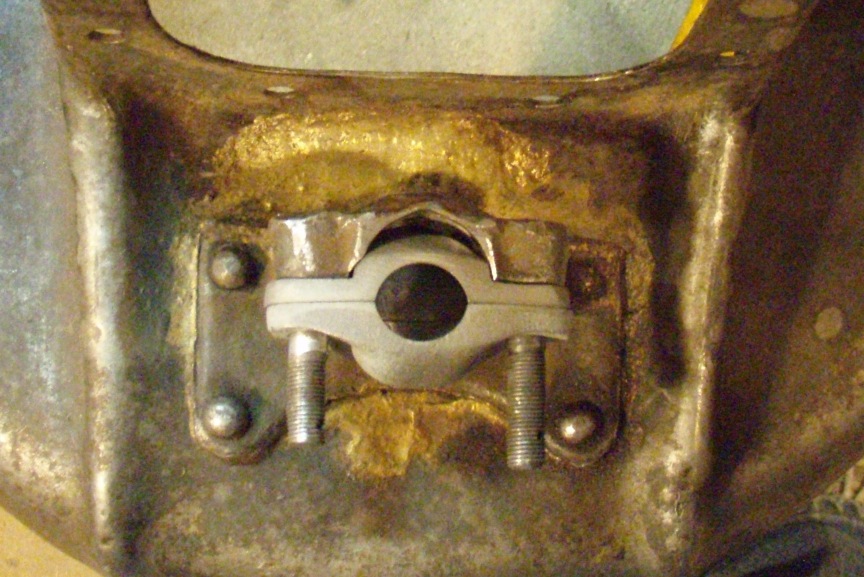 Copious JB weld was used to secure the re-shaped cap into the worn socket. 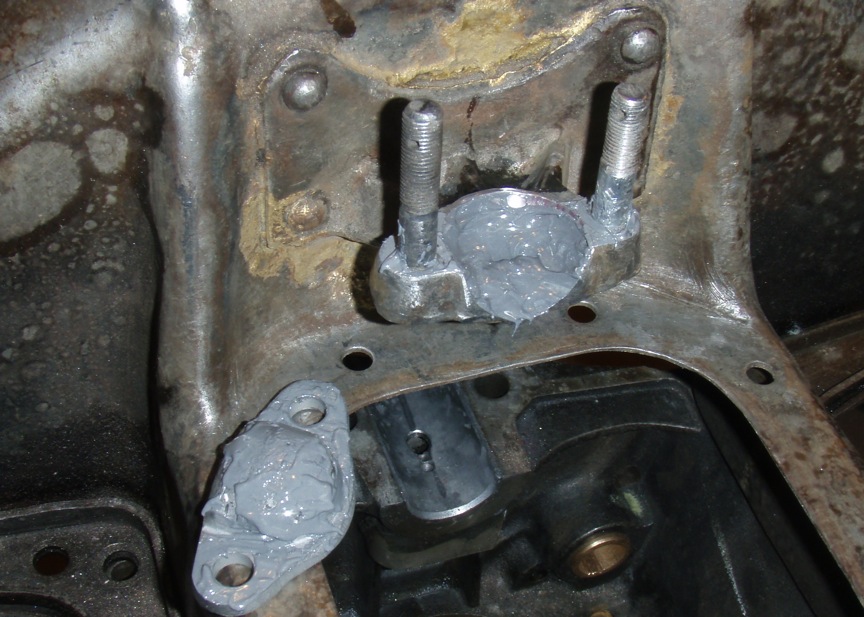 Finished assembly. This engine was intended to look like it had not been rebuilt, hence the grime carefully smeared on the repair area. This repair drops the wishbone very slightly from the stock position, but not enough to be of any consequence. 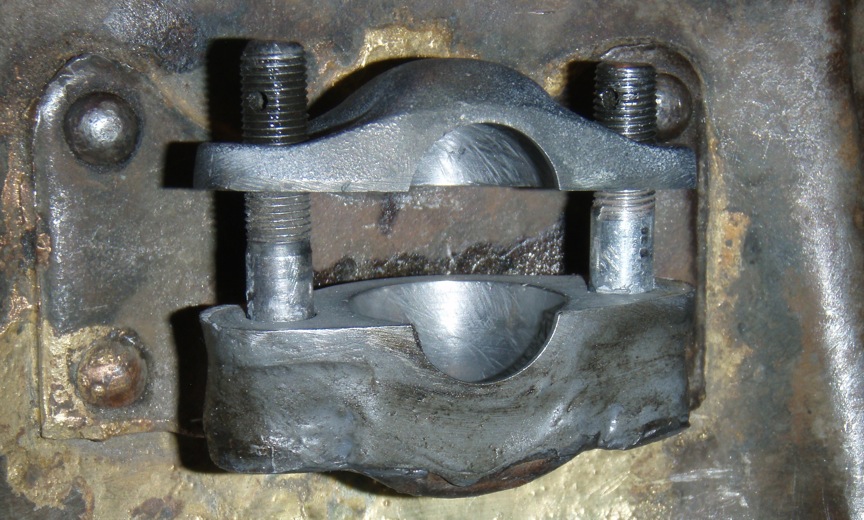 Well, I think I found the "Cat's Meow" tonight. The leather did well, but the ride was still a bit bumpy for my tastes. I took off the radius rod and used a caliper to check the measurement. It measured 1.25 from side to side and 1.34 from top to bottom - someone in the past had welded on a little nubbin, giving the ball somewhat of a point. Despite that, the car would still bounce around. Therefore, the wear had to be either in the pan, the cap or both.

I dug out the APCO spring-loaded accessory and cinched it up using lock-washers and the nuts that came with the studs. I tightened up the APCO spring to where it should be and took the car out for a three-mile drive, part of which is paved, but rough. I have to say, it was the smoothest drive I have had in the car since I bought it. Let's hope this continues.

I think it might still be safer to fix the ball?

Leather is a temporary fix to get you home. Would not trust it beyond the end of the driveway.

Don't get me wrong on this. I too have done the JB Weld repair and its held up OK. But I don't think I would trust it where the front of the socket is wallered out as much as I see in the photo. I would be concerned the ball might slip out the front. JB Weld won't keep that from happening. Re the inverted cap technicque, it looks like we are asking a lot of the two studs to hold everything together. Perhaps it would be an improvement if the repair cap were brazed or welded in place.
I have to say that welding up the socket and ball back to standard is the best way to go from a structural standpoint.