Now that we've struggled through replacing a wishbone socket with Mack Cole, I'll share what I learned today from one of my Gurus. I'm very fortunate to have two Model T guys in their 80's here in town that I can ask questions of and learn from, so I thought I'd pass this along to others. Sorry I didn't learn it a few days earlier, Mack, but you can be proud of a job well done the "right" way.

My mentor said to take a wishbone ball cap and grind on it and the ball socket, so the cap would sit down into the socket. I did that, and the socket was so worn that I didn't need to do much grinding on it at all. Actually, there was a gap between the cap and the socket, so I filled the gap with JB Weld to hold the cap more securely.

Here are some pics:

This is the cap I used, a repro one, with the left side as it came, and the right side ground down flush with the "ears". 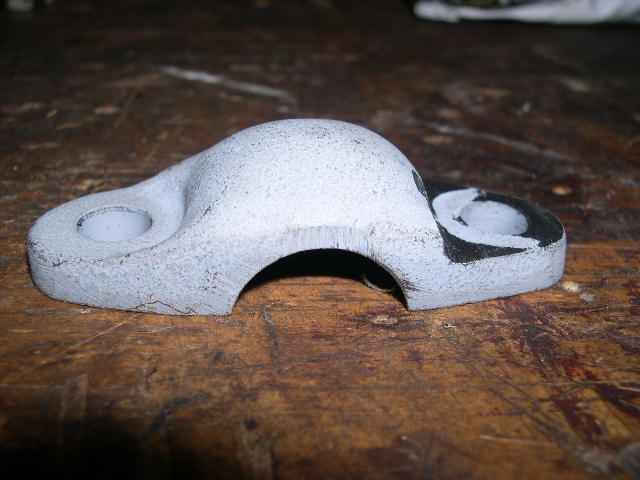 This is the socket in the crankcase. You can see how worn it is, and that the back side of it was "blown out". 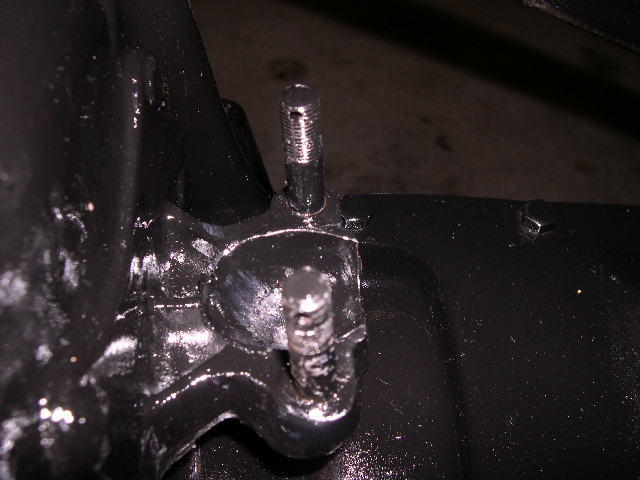 Here's the cap ground on both sides and all ready to go. 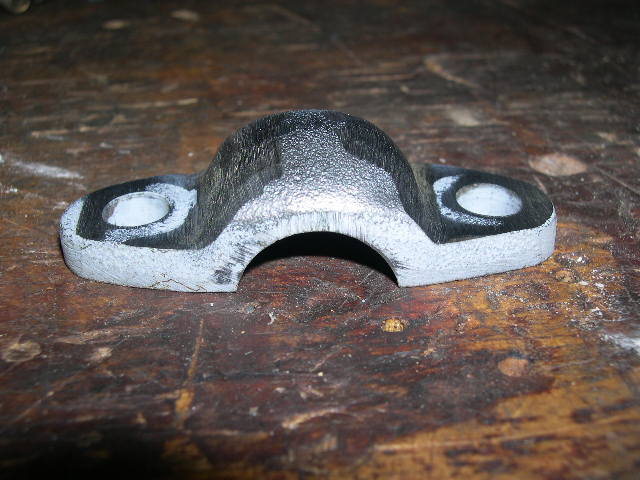 This is how the socket looked after grinding on it with a die grinder. Basically, all I did was open up the front of it a bit on the sides and grind away the paint & stuff so the JB would stick to it. 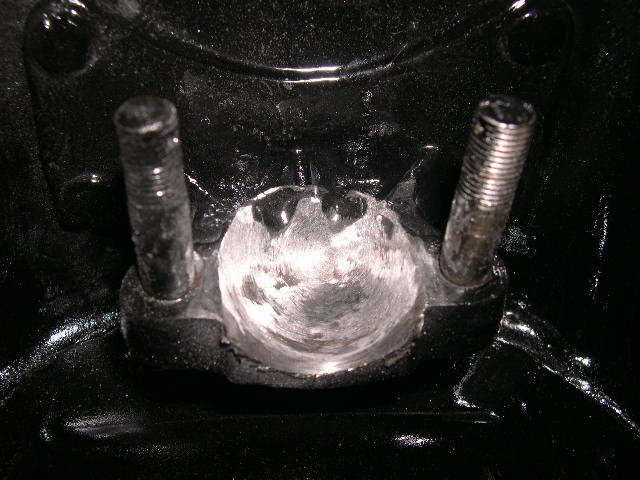 Here's the cap in the socket for a trial fit. 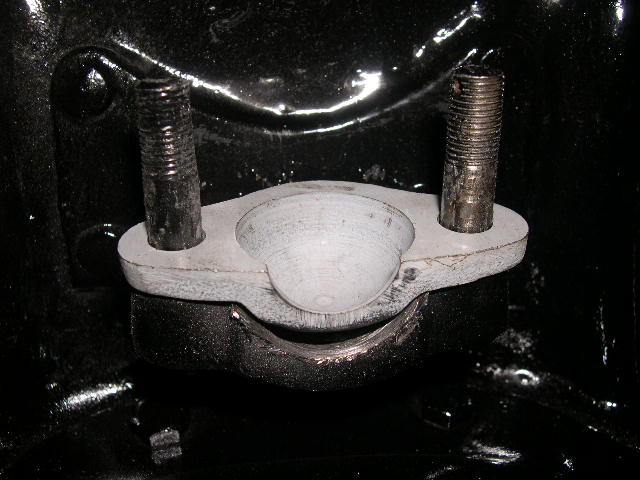 The socket with JB Weld and some masking tape to hold it in place. 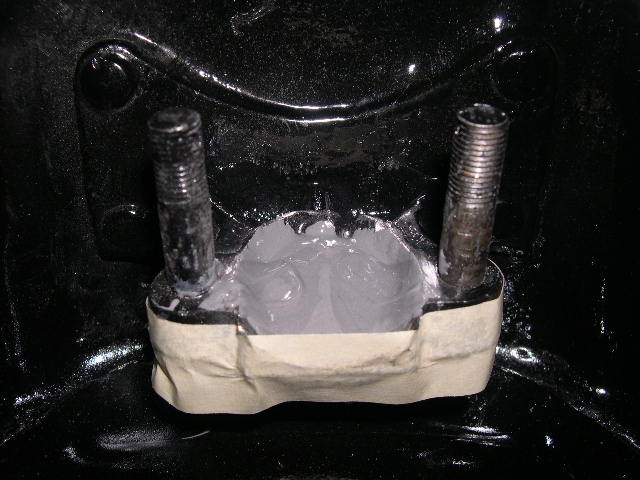 Here it is all together, with springs and nuts to be sure the cap doesn't "float", causing a real mess. 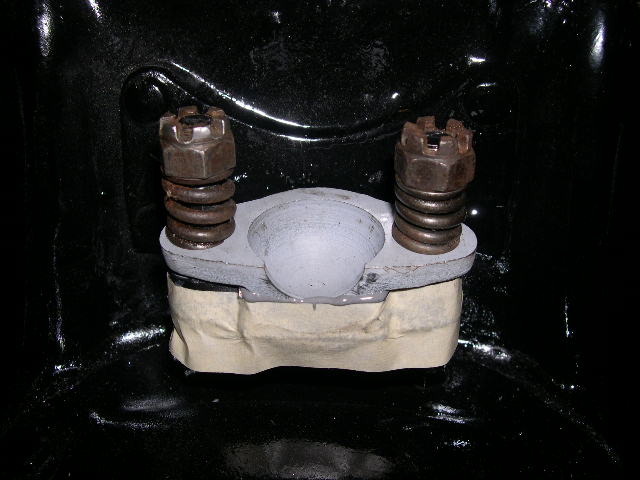 It'll sit like this overnight, and should be ready to go tomorrow. A piece of cake, right Mack?

The wishbone ball will sit about 1/8" lower, which will slightly increase the caster on the front axle, but that little bit shouldn't be enough to cause a problem. If anyone is worried about that aspect of it, he could add some 1/8" thick shims to the crankcase ears to raise it that amount.

Well I'll be uh, Danged! I woulda never thought of doing that.Trust me,i have another pan I bet that wouldnt even work on! I forgot to get a photo of it.I got some primer and red coating on the 1 I installed a socket on but my shop got dark before I could get a photo.In other words the sun went down!

If I read this correctly you are expecting JB Weld (fine stuff if used properly) to replace the missing steel in the socket? This seems to me to be wishful thinking........maybe I am misunderstanding what you are trying to achieve?

There was a nice article in a recent issue of Vintage Ford about repairing the socket using welding, then using a large carbide ball burr to grind the welment to the correct contour. I think if I were going to do this I would use the welding method.

Royce,He installed the cap in the old socket,the jb weld is just there to take up open space.I thought the same thing till I really got to looking at it.I hope this repair works as it may be a good alternative to scraping a pan for someone without welding equipment,could also be done in car perhaps.

I would think wire or stick welding the socket up and regrinding would work and I aint above trying it on 1 of the lesser quality pans I have laying out back.
I also couldnt understand why it was correct to use brass to fill in around the new socket I installed.Looks like I coulda welded it with a 1/8th 7014 or 7018 welding rod and my lincoln welder.

Mike we've been welding them on like that for years. It makes a good new socket. I use the old steel caps when I can find them.Some of the 4-dip pans need longer studs then.

Royce -- The cap remains in place and becomes the new socket. The JB Weld is just to help hold it in place. My mentor said that wasn't necessary, that the springs and nuts on the new ball cap (the one on the bottom when everything is back together and right side up) would hold it in place, but I feel better about having something there to help fill the gap and hold the new socket.

Jack -- I know others, such as yourself, have done this before. I was just trying to share the idea with those who haven't seen it. This forum seems like the perfect place to do this, and I'd like to see more of it. I hadn't seen this method of crankcase repair until today, even though you've been doing it for years.

C'mon, guys, let's spread the word on some of this kind of Model T repair knowledge before all of it dies with the really OLD guys (like Jack).

It looks like a great bit of "T re-engineering"
That has to be cheaper, easier and faster than a full R&R or a weld and grind.

Cheaper? Yes, a new repro ball cap costs $9 from the vendors. (I didn't want to use any of my NOS Ford script ones for this!)

Easy? A piece of cake.

Faster? Yes, it took me about an hour. Ask Mack how long it takes to do it the other way. And I think it's an authentic Model T fix that goes way back, all but the JB Weld. Back then they just welded them in place, as Jack mentioned above.

Of course, for a nice restoration, you'd want to replace the socket with a NOS one. But for a driver, why bother doing that when this is so easy?

One point I'd like to add re welding the socket and drilling a new hole with a 1 1/4" ball end mill. If you use anything much harder than brazing rod to fill the socket, its the devil to drill out. It takes a ton of pressure on a good size mill. I had it tig welded with silcon bronze on an early pan without the reinforcement ridges on the lip and the pan was bent in the process.

An authentic Model T "fix" would have been to replace the pan. A repair might have done as described though.

Why not just replace the socket? NOS 4-hole sockets are common; I have 2 of them myself.

OK I see. I guess that would work if you could not find a better pan to use.

RV, it takes a lot of heat over a large area to remove those sockets. You run a substantial risk of warping the pan.

Yea,you dang skippy it takes alot of heat.I was lucky and didnt damage anything.But the potiental is there to ruin a pan.
I wouldnt mind finding another nos socket myself.I am going to try to catch the fellow at home today where i got the 1 I used.

Just a word of caution imparted to me by Ted Aschman many moons ago. He had seen a ball socket launched across a workshop during replacement...

The story goes that the rivets were removed and the sump was heated to unstick the braze weld holding it in place. Owing to the grease and gunk(?) accumulated in a void behind the socket, when it reached the critical temperature the thing exploded off the sump! Might be worth drilling a hole through your old one before getting to it with the oxy.

I like that repair though... would it be good for a drag link too?

What was the part number on just the socket? My parts book doesn't show the socket as being sold separatly. These must have been made available after 1928 if they are NOS. (Or an after market part?)

Mike's method of repair also increases the caster slightly. I'm not a JB weld fan personally, I'd have probably taken my wire feed and ran a bead around it but there's no reason this fix wouldn't work just fine.

Sorry, I didn't notice that Mike had already noted it increased the caster. I'm thinking that is a good thing. Most T's could use a little more caster, I think.

Most pans are already warped and bent; I don't see why an additional warpage couldn't be corrected along with that from the usual bangs, bumps, and twists. It would be desirable to confine the heat to the socket area so as to minimize it, if possible.

I build up the socket in the pan with brazing rod and then properly re-machine the socket. I do this for $70. I can also build up the socket with steel, instead of braze which will cost a little more because it is more wear on the tooling. The braze seems to wear just as well as the steel, and the braze is what I prefer to use on my own projects.
Adam Doleshal
Adam's Antique Auto Parts.

I reckon it would pay us to check the Snyders website once in a while.
http://www.snydersantiqueauto.com/detail.php?fm_itemid=496&fm_catid=49&fm_parent id=496