Okay, I was messin around in the garage this morning after I got home from work (planning on taking the TT out for a stroll since it has FINALLY stopped raining!), and I noticed something that concerns me. Under the bottom of the A-pillar (hinge pillar) there is what appears to be a mounting bracket on the body that would (should?) have corresponded to a bracket on the frame. However, there is no bracket on the frame, on either side. There are a couple holes in the frame where I would think a bracket might have once been. I added a picture with some crude arrows pointing out what I'm talking about.

My question is simple; How many places does the cab bolt to the frame? Is there supposed to be a bracket on the frame for the A-pillar, or is it just swinging there suspended between the brackets at the firewall and the floor crossmember? I've never seen a vehicle (early or otherwise) without a support at the A-pillar.
Thanks in advance
Ray 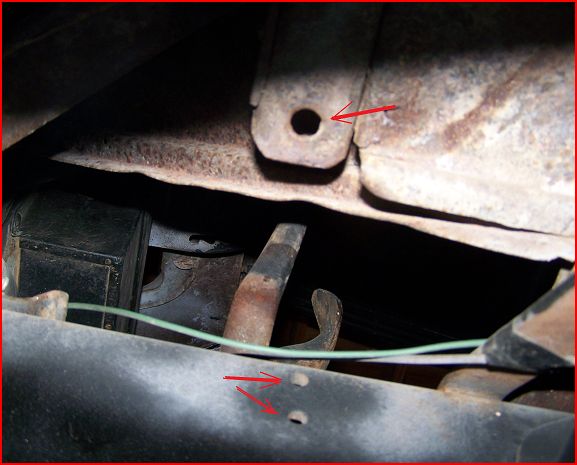 Ray,
You're missing mounting brackets. The enclosed cab mounts to the frame in 4 places. Its important to understand that for the first 7 years of it's life, Ford's TT didn't come with bodies (1917-1923) and only had 4 of the little car-type mounting brackets for all the aftermarket wooden cabs. Even the bare chassis sold from '24-'27 had these little brackets. To mount either the C Cab or enclosed cab on a TT frame you'll need the 2 forward brackets (approximately 4 3/8" X 4 3/8" X 2 1/2" wide) and the 2 rearmost brackets (4 3/4" lengthwise X 1 1/2" wide). The 2 holes shown in your frame picture will mount the little car-type bracket. You can simply amelioriate the need for a sure-enough TT frame bracket by using a 3"-4" long piece of 1/2" strap metal that extends from the frame bracket you have yet to acquire to the mounting hole on the enclosed cab sub frame. The Ford TT front body bracket is riveted to the frame with 3 ea. 3/8" rivets and has 4 ea. 7/16" mounting holes on the upper surface. The rear TT body mounting bracket sports 4 ea. 1/4" rivet holes with only 2 ea. mounting holes of 7/16" that're used for both the rear of the cab AND the Ford bed - either express or stake. Strap metal extending from a rear bracket mounting hole to a rear cab mounting hole will also work if you only have these little car mounting brackets. I forgot to mention that, to match the cab (either one) to the correct height of the firewall, you'll have to include a riser between the 4 mounting brackets aayway so just use the strap metal. Due to the rising interest in TTs lately, I've considered reproducing these TT frame brackets for those who have to use the pre-'24 (C Cab) frames.

So, that answers another question...my truck likely has either an earlier frame or it was originally a bare 25-6 chassis. Since the engine is a 26 I have thought maybe the truck is a 26, but now I know it was likely not an original closed-cab either way. After reading your reply, I went out and looked at the rear of the cab. There are no brackets there either. There is an apparently homemade crossmember (although well-made, it is clearly not an original part because it is heavier than anything I've seen in a Ford subrail or crossmember) that spans the width of the cab and lays across the frame, bolted to the top flange and to the bottom of the cab.

Do you have a picture of these brackets? I don't mind fabricating the brackets, but to see what they originally looked like would help in making them as near to original-appearing as possible.

thanks so much for your reply.
Ray

Several views of the front brackets - 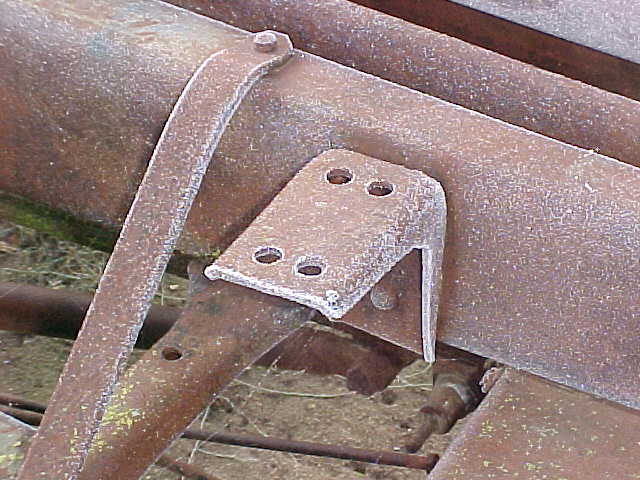 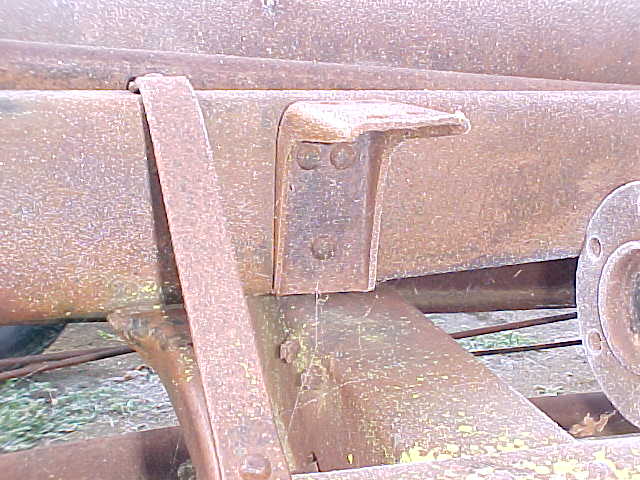 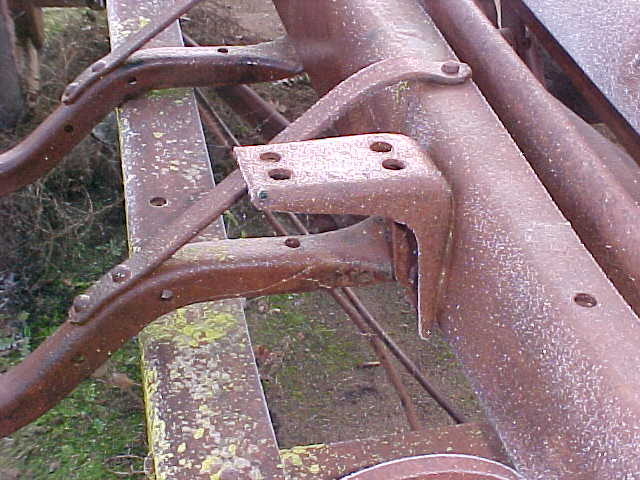 The rear brackets - note: the first image shows one still in place on the frame. This one has been clipped to allow addition of extension pieces for a Warford installation. 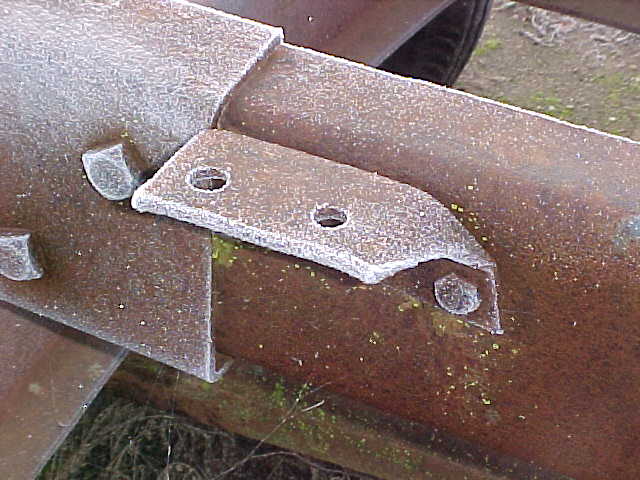 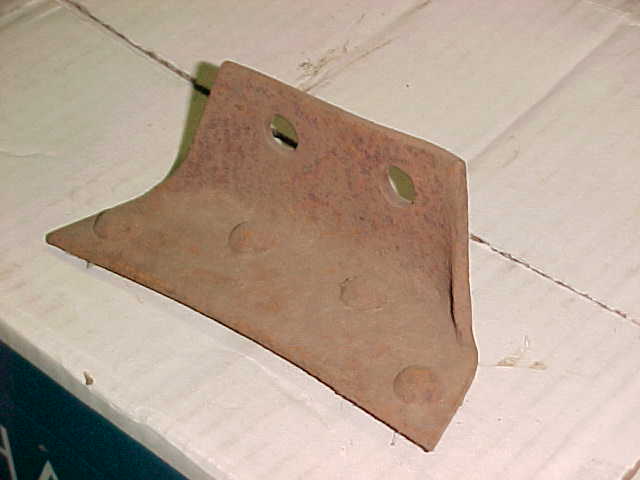 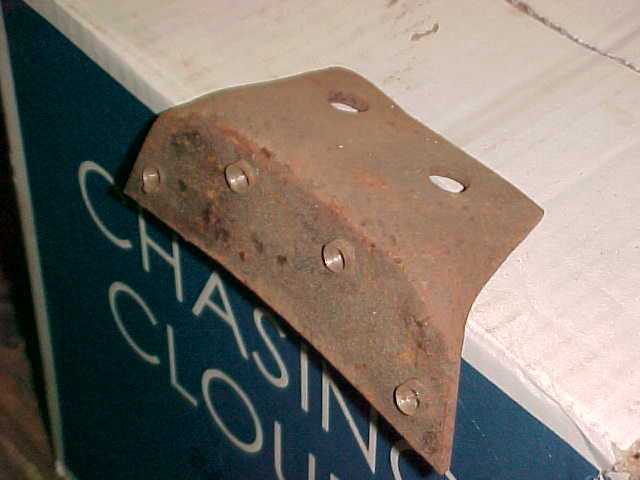 Here is the drawing from the June, 1926 Service Bulletin showing the location of the brackets on the frame.

Dang.......You guys are good....As I was reading the question I had a flash-back.....When I got my truck umteen years back the only thing keepin' the body on truck was theFIREWALL...When I crossed over some railroad tracks "AtSpeed",as they say,it was like an "E" ticket ride....I've since fixed the problem "just like Phil is suggesting" Good luck and have fun with "T"....I mean "TT"..........Spanky

This isn't documented, but I believe Ford used the double hole front bracket beginning in 1926 and previous to that it was a single hole bracket. The c cab I am overhauling is a single hole although I have others that are double. I can post a picture possibly tonight if needed.
Billy Key

I believe that is correct for the earlier frames. The front bracket appears to be the same as the ones used on the passenger cars. The earliest TT frames (perhaps pre-1922-23?) had the same brackets at the rear as well. I have not seen any documentation with respect to dates of the changes, either. 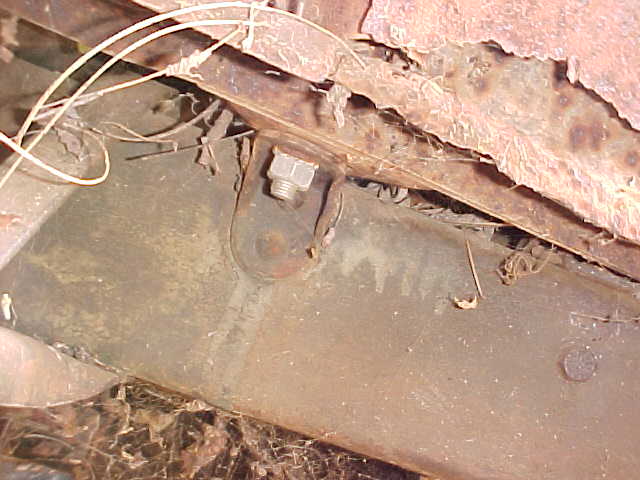 The rear bracket which followed is a bit more substantial but has only one hole for the body bolt. 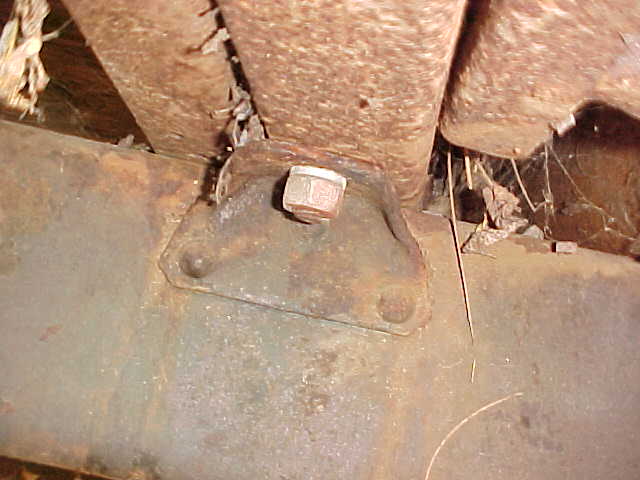 The TT chassis drawings from the July, 1919 and August, 1920 Service Bulletins show the earlier configuration.

Sounds like Model T Haven strikes again! My touring body had 2x4s for body rails and the doors were pop riveted shut due to lack of hardware. There's a good chance the body was set on the frame and secured with the heavy crossmember since the other brackets were missing.

You may want to check the rest of the truck after this is fixed so you're not leaving a trail of parts behind you. Breadcrumbs are a cheaper way to find your way home!

Let me check the "pile" I may have 2 of those rear brackets.I will have to see.

Personally, I'd love to see any pictures anyone has of questionable parts on these trucks!

I lied...there are no holes in my frame anywhere near the back of the cab. There are no holes from the ones pictured near the front cab mount all the way back to the rear crossmember. Apparently, my frame has never had a rear cab mount of any kind, or someone welded up the holes. Now, I'm really confused :-)

The closed cab truck I've been working on had the cab placed on a car chassis and was supported only by the firewall and two bolts through the rear angle. One firewall bracket was broken to boot. Mighty shaky body to say the least. I fabricated front and rear frame brackets.

I'm trying to orient the view of your picture but couldn't figure it out. Here's where the front body mount is located. You can just see it under the RH floor riser. (Arrow) 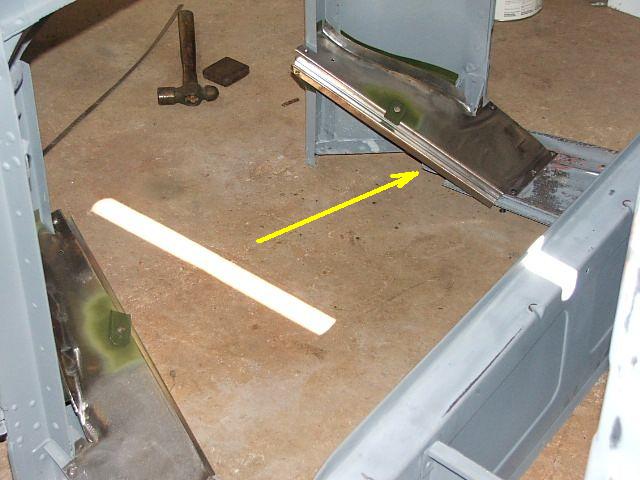 Ken, that is what I have in the picture. My picture was taken with me laying on the floor under the driver's running board, looking up.

By the way, what is the purpose of the four holes in the front cab bracket (on the frame)? Should there be wood blocks between the cab and frame brackets?
Ray

I think Ford used the 4-hole brackets to allow the use of different bodies.

When I made the brackets, I left them flush to the top of the frame. The only way for the front body mount to make contact is to use a block. The outer part of the block needs relieved to clear part of the body rail. 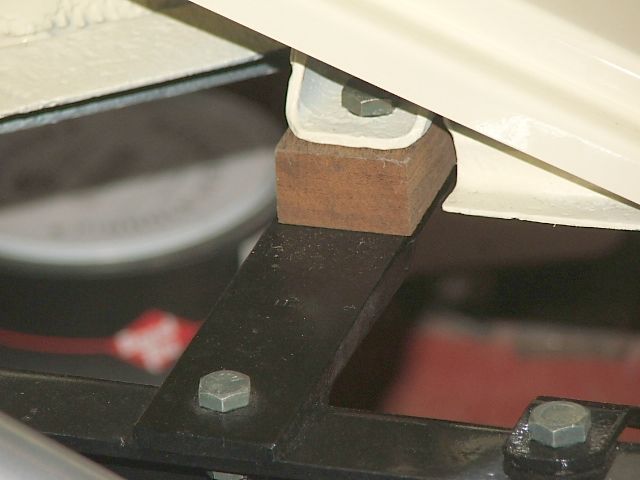 Here's a view from the front. (Remember, this is a car chassis.) The outer bolt is not installed and the inner bolt isn't tight yet in this photo. 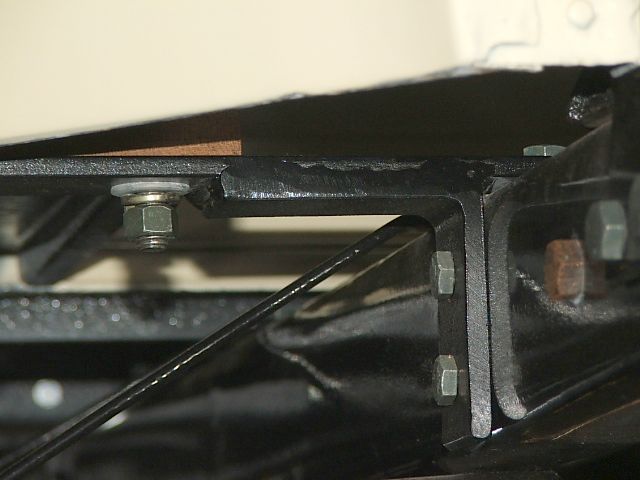 Ray: I will be out at the barn later this week and will take a picture for you of our truck. I believe it is original as it came out with a truck frame, Ruxtell etc.
Fred McDonald

Thanks for the pictures, Ken. When you mentioned the inner and outer bolts, what were you referring to? I don't see an inner and outer on the cab, front or rear, so I'm once again confused :-)

Thanks Fred. I probably just need to hurry up and come down to see you, if you still want to put up with me for awhile! I could make heads or tails out of a lot of this if I had 30 minutes with a truck that was like it is supposed to be. Maybe I can buy your lunch too as a token of appreciation...
thanks guys, you're a great help
Ray

Ray, there's two bolts on each side. There's an inner bolt as shown in the second photo and one not shown to the left of it (outer). The outer bolt is smaller and is a carriage bolt. It's installed through the small square opening next to the floor riser (top side). You should see a square hole if you look down that opening. 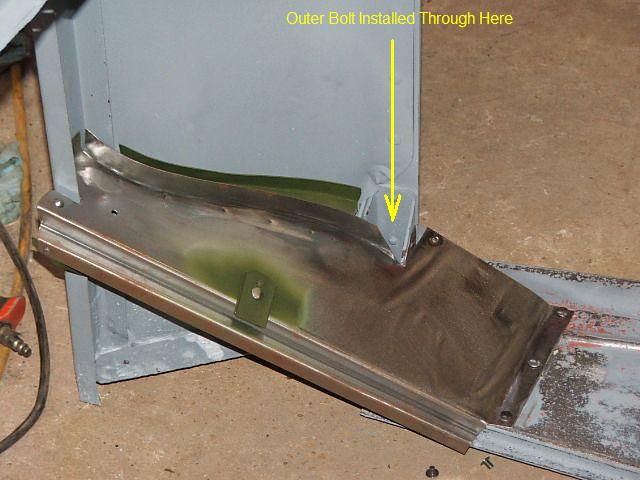 Okay, I found it. Thanks Ken! By the way, very nice metalwork
Ray

Hello Ken,
Did you make the floor pans or buy them? If you bought them where did you get them and if not wow what a very professional job. I have a 25 TT enclosed cab and I wish to mount it on a car frame is there any tricks to do that? Thank you very much for your info.
Eric Keenan

Did you make the floor pans or buy them? If you bought them where did you get them and if not wow what a very professional job.

I made the risers Eric and thanks for the "flowers". The seat side panels and all three rear panels were made as well.

As far as mounting the TT Closed Cab on a car chassis, The body and running board mounts present somewhat of a challenge. I think I had the body on and off the frame four times for fitting. The truck belongs to a customer. All I was supposed to do was "beautify" it but as with most of these assembled vehicles, a few things needed repairs or changed. (No body brackets at all.)

To make it look more like a TT, the rear RB crossover is removed, cut and mounted to intersect the rear of front fenders. (It has to be cut to clear the transmission.) The front RB crossover is then moved back a few inches and aligns with the body's center support.

I've run into a situation with the steering bracket but I'm hoping George House will lend a hand on that (parts).

I may end up having to relocate the holes for the steering bracket and/or use a different bracket.

The "originally installed" was a 26-27 bracket but had broken and bent tabs. I think I know why now. The angle of the column doesn't intersect with the mounting holes in the 26/27 car-frame very well. My error was not checking this in more detail during fitting and simply buying another 26-27 bracket.