We bought a 1926 Roadster in June and have been driving it quite a bit. It's in great shape, took very little work to get it running well. It looks to me like it's pretty close to original. A post I saw here the other day got me to wondering what my windshield is made out of. Is there a way to tell (other than breaking it) whether it's plate glass or safety glass? If it is the original plate glass, am I reducing the value of the car by putting in safety glass? About how much would it cost to replace the glass?

hold a coin on edge against the glass. if you see two reflections it is laminated. some clubs insist on safety glass for tours etc, where-as your insurance provider may demand it. a bug (marking on the glass indicating grade of glass) if required by your local department of transport can be put in an inconspicuous place. the Ontario regulations do not require the marking. i am sure some-one will post a drawing that you can take to a local auto glass shop for a quote. cost? what is safety worth?
steve

I got my safety glass from Mac's. It was easy to put in. If you look at an edge of the glass and see a line down the middle, you have safety glass. No line equals a problem if something hits that glass. Like Steven Miller said, what is safety worth?

You are correct but there is laminated AS1 for windshields and there is laminated AS2 for side and rear glass. The Ralph Nader crowd wants you to have AS1 in the windshield and it will not fit in your old original frame. AS1 is too thick to fit in windshield frames made for 1/4" plate glass. So you must cheat in order to drive your car on public streets.

Welcome to the world of protectionism. Vote often and vote carefully lest you put your car in the crusher to satisfy someone who I can't mention here because I must be politically correct tonight.

my understanding is thqt there are two pieces of 1/8 inch glass plus the laminate on AS1. It has been that way for many years.

Do not use AS2 for a windshield! You don't want to make a windshield out of tempered glass. It's okay for side glass and the backlight.

This may be obvious, but while helping with parking at the old car festival, I saw several cars where this was the case. Apparently the owners didn't want the lamination visible so they're risking a shattered windshield with the first stone chip.
http://www.scautoglass.com/history_auto_glass.html

Randy -- for only 25˘ you can easily tell what kind of glass is in your windshield, and even get a quarter back in change.

Hold the coin loosely between your fingers and rap the edge sharply against the glass. A dull sound indicates laminated glass (the plastic interlayer absorbs and deadens the sound). A sharp reply indicates a solid glass pane -- either tempered safety or plain ordinary plate.

Try it on your modern car first to hear the different sounds... windshields are always laminated and door glass is always tempered. 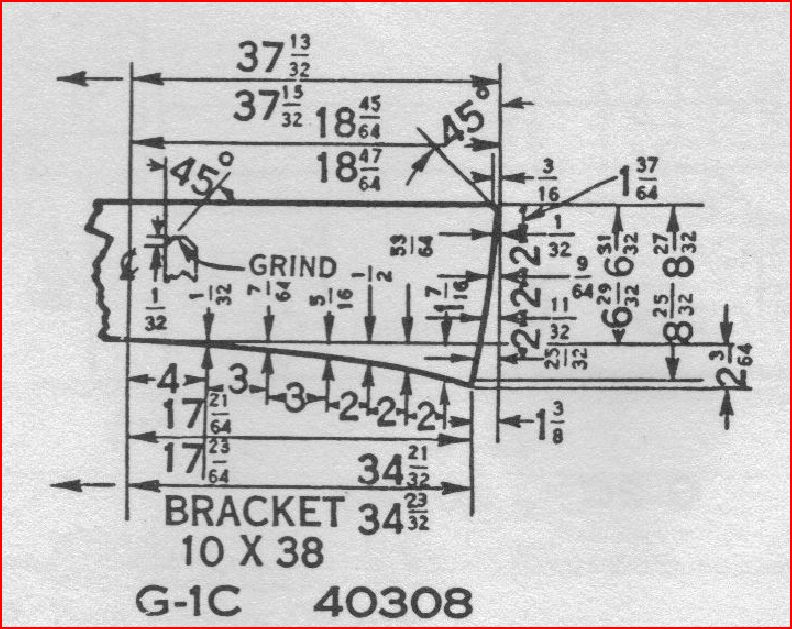 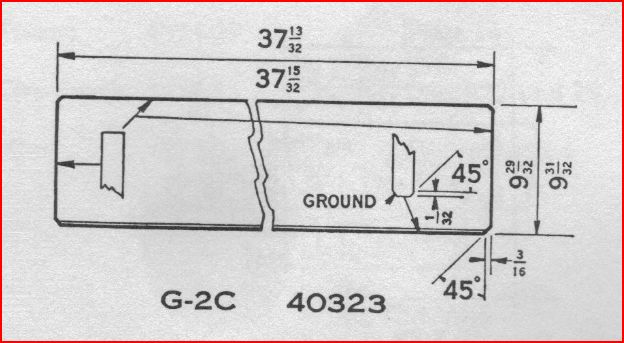 Thanks for all the help and information. I will be "spending" a quarter to check the glass tonight and will make sure I'm looking through safety glass next time I drive.

Can anyone tell me where the 8 25/32 to 8 27/32 vertical dimension has a corresponding horizontal dimension from the centerline?

Or stated another way what is the corresponding horizontal dimension for the lower piece of windshield glass?

I think the 4" horizontal dimension corresponds to the 1/32" vertical dimension, and so on until the last 2" corresponds with the 1-7/16" as well as with the 8-25/32 to 8-27/32 dimension. The resolution leaves a bit to be desired, but it looks like there is a hint of a horizontal extension line hanging a little below the curvature.

Yes, that drawing is very confusing. If it were larger in the book, it would help a lot. I can't see it in the book, even with my glasses it is too busy. I enlarged it to where the fractions were readabable.

I thought the double vertical line from the bottom corner was for the same point (the corner) but it's not. The sum of the 2 3/64 and 6 29/32 to 6 31/32 is greater than the 8-25/32 to 8-27/32 dimension (what I first thought was the total height), so now I'm confused! I'm a machinist, not a carpenter. I don't do fractions well in my head so I'll have to sit down and convert all this to a proper print in decimal. I think with a little math and process of elimination we can figure out what that dimension is.

Sorry about the resolution, That drawing is from the Ford T-11 glass book, and if any of you have one you can look and see it is tiny in the book.

I did check my glass last night and found the safety glass markings in the lower passenger corner of both upper and lower windshields so I can quit worrying about that. Now I need to look at the catalogues and find new ruber strips for the bottoms, as the rubber is dried out and brittle. But I also saved the drawings just in case.

Thanks for the reply.

Ray: I think I have that same picture and that is why I asked the question, as I do not understand what dimensions the drawing is giving me!

Thanks for all your interest in trying to get the record straight! It's a small point but it would help to get the lower windshield glass cut correctly the first time!

Glad you have escaped the need to change glass out although it is neither difficult or real expensive. I recently acquired a 26 Tudor and have the task of replacing all that glass now. I plan to start on that next week.

I have 2 other 26 open cars and I replaced the rubber on the bottom and sides of both of those windshields.

You might want to prepare yourself to learn some new words when working with the rubber that goes in the lower windshield bottom.

I had a time with mine. If you stretch the rubber too much to get it in it will be wavy along the bottom, however getting it in without stretching it to much was pretty difficult. The one thing I wish I had spent more time on was getting the channel it goes in perfectly clean and then lightly lubricated before you start working the rubber in.

Good luck and yes it will go in right and look good just be patient with it.

I've used dishwashing liquid diluted with water to install rubber, It allows it to slip fairly easy, and once it dries out it doesn't stay slippery. Weather and washing gets rid of the lubricity and the rubber stays put, unlike oils or many other lubricants which don't go away as easily. Also, most petroleum lubricants don't get along well with rubber.

You're right. I didn't bother to add them up before responding. Now I'm baffled as you!

I think Chuck figured it out. That's what I've figure too, and all that I can come up with as well. I've made a couple sketches and figured it, and that is the only conclusion I can draw from what is available there.
Ray