I have with a problem with the rivets that hold the ball end of the drive shaft to the tube. While taking out the bushing on that end, I somehow sheared off the rivet heads on the inside of the tube. Can the rivets be replaced and what will I need to do it. Where can I get the rivets?
Any help would be greatly appreciated!

Unless you have the means to make up the proper bucking tools and have the riveting equipment, perhaps a search for a replacement torque tube would be in order.

Dose anyone know if any of the vendors or any one can do the riveting?

When I've done the job, I used 1/4" shank truss head rivets. You drill the holes, place the rivets with the truss heads inside. Its hard to do but can be done. Then drive a drive shaft up thru the torque tube so the unmachined part of the drive shaft acts to flatten the truss heads against the inside curvature of the torque tube. Since the unmachined area of the drive shaft is larger than the machined part, you'll have enough clearance once the driveshaft is assembled. When the drive shaft is solid against the flattened truss heads, cut off the exposed shanks above the outside of the torque tube. 1/4 inch is about right, just make sure they are all exactly the same height. I use a Dremel with a small cut off wheel. Then heat the exposed shanks with an acetylene torch and hammer the ends with the peen end of a small ball peen hammer. The photos show a two piece driveshaft but the procedure is the same with a later one. I've done a few and they've all come out good. 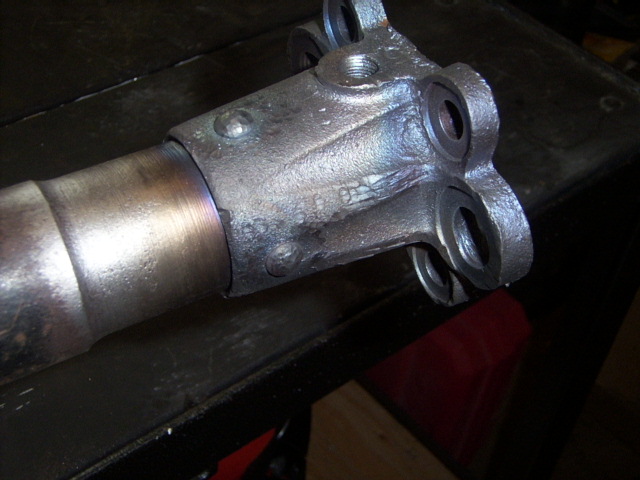 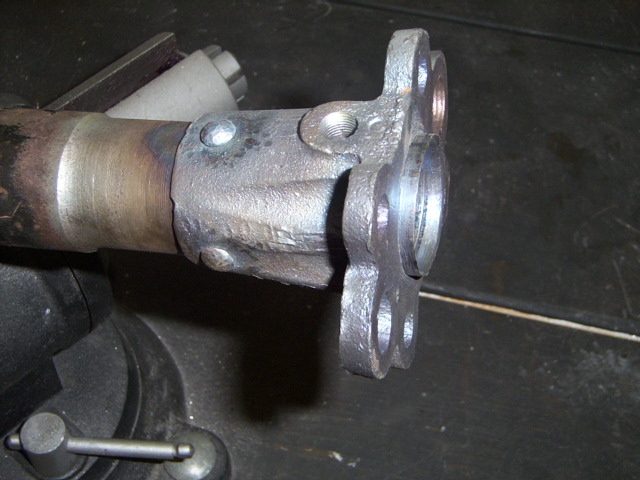 Larry I have spares, don't sweat it

I'm sort of a do-it-yourself kind of guy and this wouln' t be something I would be afraid to try. One advantage here is that the rivets could be inserted and then a snug fitting round solid rod could act as a buck. Then heat the rivets and hammer away. I have used a round burr to make a depression in the end of a rod to form the end of the rivet when rivetting a frame. Be sure to support the axle tube below where you are hammering so you don't bend things.

I'm a slow typer, Richard did a better job of explaining how to do it.

Thanks for the input guys! Don, I will be in touch!

Did you really shear off the rivet heads flush with the tube, or did you just scrape some off the top. I think shearing of the rivet heads would take some appreciable force and effort and unless you were using a press, you would scratch your head a bit before proceeding.

Maybe you don't have a problem.

Ted, if your question is directed to me, you don't shear off the truss heads, you just conform them to the shape of the inside of the tube. You do this by pounding the pinion end of a donor drive shaft from the bottom up thru the rivet area. A truss head looks like the head of a nail so its not too hard to apply pressure to make them curve. Like I say, I've done it about three times, all on two piece drive shafts and they came out good. Its not a hard job.
Now maybe with a later driveshaft you'd need a thicker bucking bar for the rivets toward the rear, that I don't about.

My thought was it would really take some effort to actually shear these rivets, and maybe he just skived the tops off a touch and he might not have a real problem.