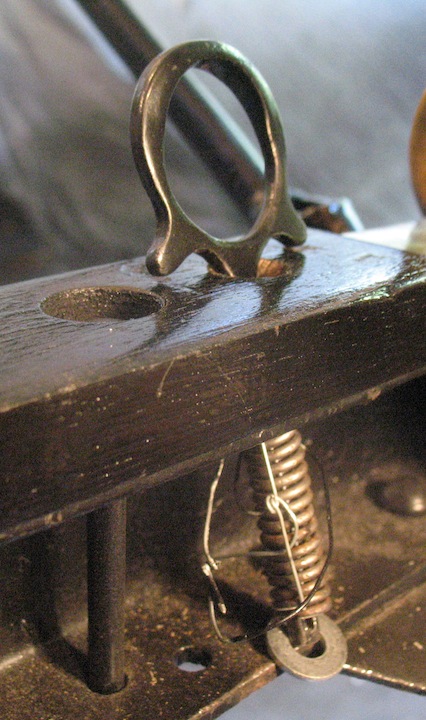 Installing hood clips looks like a simple job that should take a few minutes. Trying several methods to compress the springs, after three hours I had two clips installed and was getting nowhere with the third. 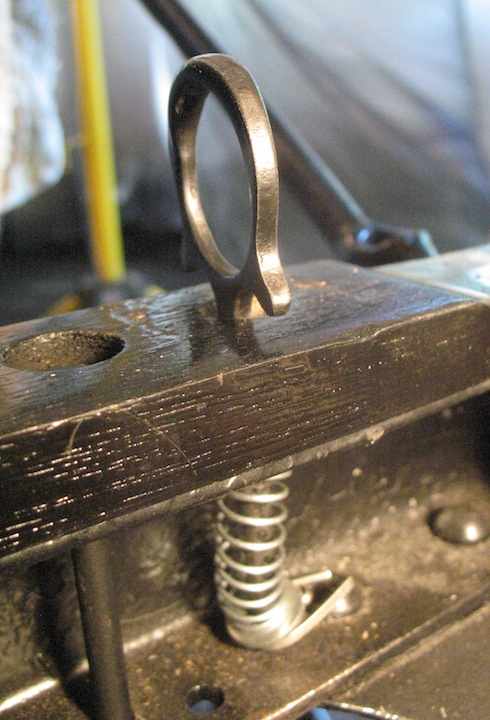 I finally gave up and went to town and bought a couple of lighter weight springs. They may not be "correct", but at least I was able to get them in. I hope I live long enough to finish this car.

wait, isn't the hold down supposed to go through the top and bottom of the "I" frame? spring is held between the two holes. Then you have enough clearance to put on the washer and then the cotter pin. When you pull up, the washer rests on the frame and the spring can therefore can compress. I just did mine last week and they just took a few minutes.

The hood clip does not go through the bottom of the frame. It needs to pivot outward to clear the edge of the hood.

Now Steve, I cannot see someone industrious as you not being able to figure this one out. Did you try cutting a slot in a short piece of tubing and wedge it under the spring with washer between, drop the hood clip in and put the pin in place. Once the tubing is out you are done.

I comisserate - its not my favorite job either.

Here's what works for me. I compress the spring all the way by putting it in a vice, leaving just a little of the coils exposed (about 80% in the vice). I then feed a piece of ss safety wire (.030 I think) through the spring and twist the wire tight (twist is on outside of spring).

When you release it from the vice one side will be compressed, the other not so the spring will be curved. Put the hood clip through the hood shelve and the top of the frame rail and push the curved compressed spring on the end of the clip (thereby straightening it out). There should now be enough room to put the washer and cotter pin on. Cut the wire and remove with needle nose pliers.

Alternatively after putting the first wire on you can turn the spring 180 deg in the vice and put a second wire through the spring and twist tight. Makes the spring straighter and a little easier to put on the clip end.

A bit work intensive but works every time. Dale's suggestion is a good one, I will try that next tome.

Steve-
I think you are using the wrong hood hooks. The type shown was used from about 1917-19120-ish. I believe the length of the shaft are different between the types. Consequently, the springs are different lengths, too.

Bud, you're more adept with a vise than me. My spring would shoot into the garage overhead, not to be seen for years. There's nothing like a spring to send you on a hunt.

I can now see it would be better to put the wire through the coil first, and anchor the wire.

Bud, your description fits what I did, both with one wire and with two. It worked on the first couple of clips, but in the first pictures you can see that it's going nowhere on the third. Slightly lighter springs did the trick.

Keith, by my reading of the encyclopedia these are 1911-1917 clips. There were some slight variations during those years. The 1917-1926 stamped clips have a different shaped head and a shaft that's about 3/8" longer. They were used during the years of peak production, so they're the most plentiful.

I think you may have the wrong springs. If you search Lang's site for hood springs there are two different lengths. They are photos of both springs as well as the hooks with the springs on them. The earlier springs have about 10 coils to them. The later ones have 14-15. If I count the coils in the spring in the first photo it has about 14 coils - making it the later one. That is why it is so difficult to put on.

Steve-
I though we got you straightened out on this last February... 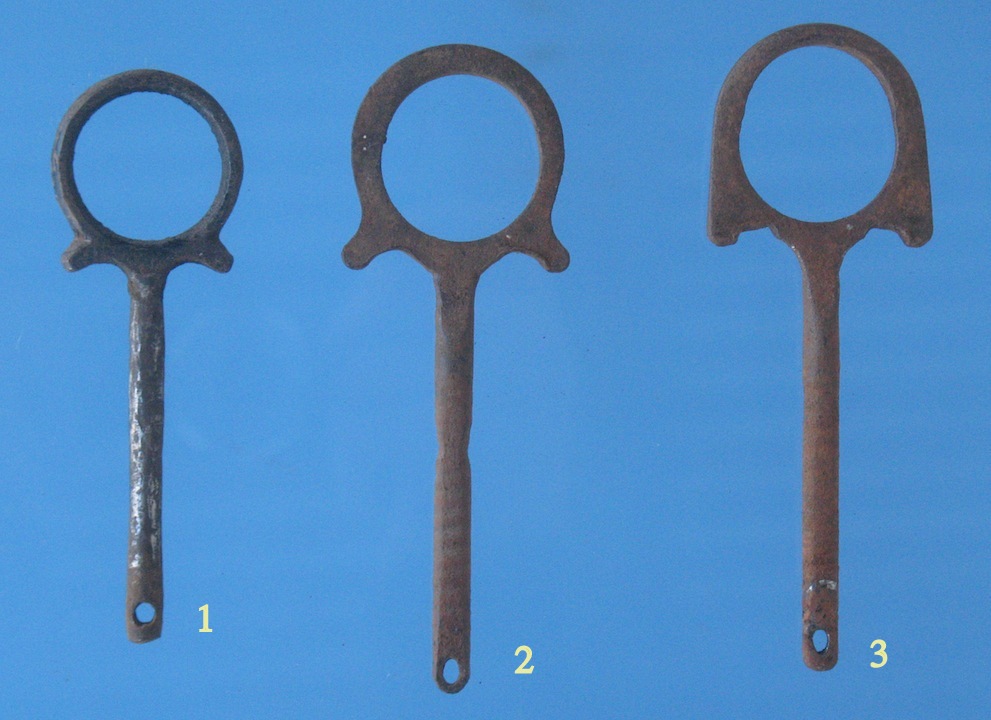 The latch you want is in the left, along with the shorter springs...

I do like Bud H except I use nylon string (always keep it pointed away from me in case the string breaks). The string pulls out easier than wire after assembly is complete. Put string in spring before compressing in vise.
Drive carefully, and enjoy, W2

Keith's a better searcher than I am.

I've always installed them to the hood shelf before it is on the car and then install the shelf as an assembly. It requires using an SAE type washer against the spring instead of the normal size washer, but it's worth it.

Steve I don't think a day is wasted if one is at peace doing whatever one enjoys doing. I look at hiccups as a test of my ability to solve a problem. (This sounds good in theory, but my garage has different stories to tell about my mouth.)
I think one of the best tool inventions of the 20th century is the zip tie. I use two of them per spring on my installation, pull both ends at the same time, they self center on the spring and keep it in my control and not off into outer space. Once the cotter key is installed, clip them and remove. This similar method also works for me on trans bands.

Are the springs that tough on ya'lls hood clips?

I stick the latch through the hood shelf and frame, guide the spring on, then use the washer at the bottom to hold on to - palm of my hand on top of the latch and index and middle fingers to compress the spring. Then it's a piece of cake to guide the pin in. But my springs are nearly as long as the ones in Steve's picture and they firm but I can fully compress them on the shaft with one hand.

I can't fathom having to compress the spring with string . . . this job is a little tedious but took me 10 minutes tops to do all 4.

Steve: it doesn't look like it but did you replace the wood and is it thicker than the orig? Don't ask how I know.

My experience has been like Seth. I redid the hack just the other week. It has the forged clip (like Steve's #1) and the wooden hood shelf.

My recollection is that the free spring length was maybe 1/4 inch or so under the inside height of the frame rail.

I lay the washer and the cotter inside the frame rail. Place the spring in place and drop the hood clip down through.

Thumb now in the clip hole, index and middle finger down I lift the clip a wee bit, slide the washer under. Tilt it to lift the washer edge and use the two extended fingers to pull the washer up a bit, The other hand grabs the cotter and slides it in.

My hood boards are a little less that 1/2 inch thick.

Could be worse things to do Steve. I spent my afternoon shadowing my wonderful bride as she insisted on NOT making up her mind what shade of gray paint she wanted to buy .... buying paint is about as much fun as watching paint dry! I'd druther be swearing at something out in the garage!

The descriptions by Seth and George don't surprise me. In fact, I've had the same experience sometimes in past jobs. I think the difference is in the length and strength of the spring. After switching to slightly lighter springs the work was much easier.