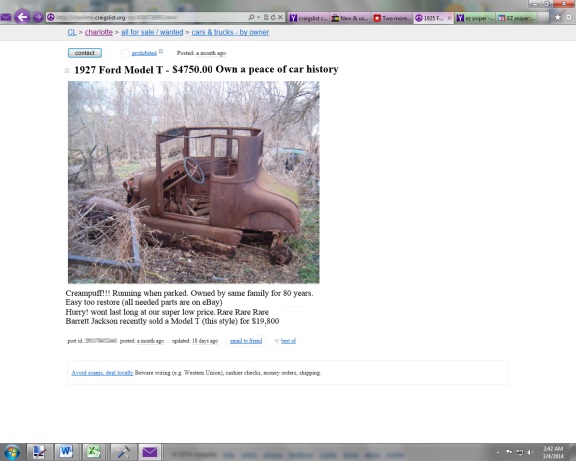 Wow. this one is currently my favorite. It's all original if you can't tell... : ) 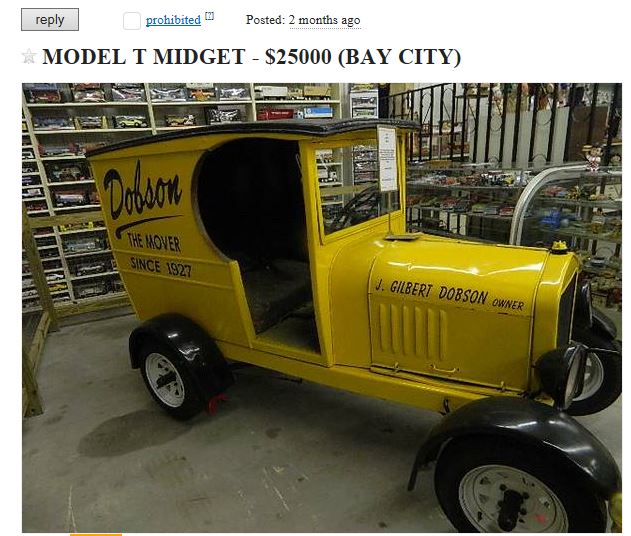 Well it's painted the right color .Way back when GM had many plants in Saginaw,and Flint,Dobson the mover hauled heavy machinery.Dobson Heavy Haul had a bull gang and a fleet of trucks.In later years the trucks were sold to Van Herron Express but i do not know if they are still in business? Over the years i loaded and unloaded many of their trucks.Bud in Wheeler.

I think that coupe has one to many 0.

Dobson has a major collection of antique fire trucks. (And apparently a goofed up Model T)

Actually it is a pretty cool half scale T. I would like to have it but the price is about double what a half a T should cost...Figure a nice T is 10,000 then a half a T should be 5000. Right?
Mr. Dobson is a wonderful host and enjoys showing his outstanding collection. He hosted our T Club bus tour a few years back. He has a famous Super Pumper truck from NY. The largest pumper ever made. Had a crew of 19 men and only went to a couple of fires in 20 plus years. Lots of interesting stuff including a super toy collection.

When we,[The Chevy Parts Plant] closed Dobson/Van Herron did all the trucking.I remember their front man who coordinated the loads a very nice old man named Wally! I think they used to be located in the old Round House? Bud in Wheller.