Looks like a master coil mounted on the front of the factory coil box? 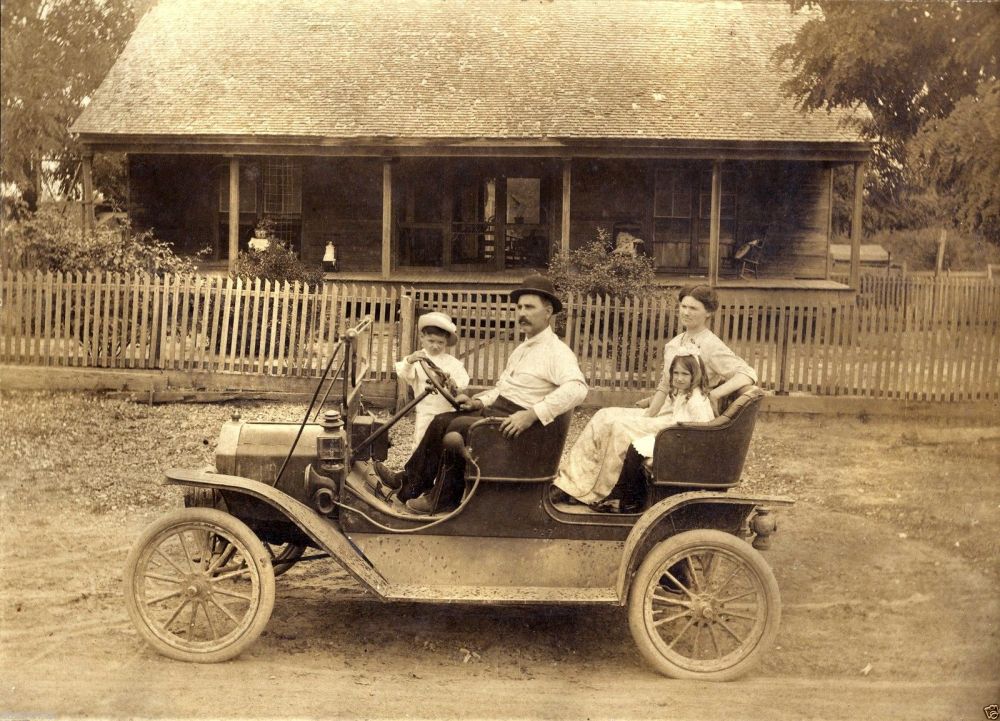 What's going on with the coil box?? Bud in central,Mi.

I've got to ask -- is the horn upside down or were some installed at the factory this way?? I've got one on a 13 in this configuration. Been that way all my life,65 years that I know of.

I don't recall seeing many round tail lights on early T's. I suppose the dealer or owner could buy them anywhere they wanted.

Odd roundish tail light for 1910 - doesn't even look like the Victor lamp that was used on some '13:s, maybe its an accessory never originally fitted to Fords?

The tail light fount looks like a Deitz and several others. I suppose a fair number fell off or got crushed and had to be replaced. I always remember the old fellow who told me about his Father's Model t that didn't have a tail light "but you didn't need one 'cause back then there was never anybody behind you".

The windsheild support rod's look too far back on the lower end?? Bud in central,Mi.

JAY!!!
Thanks for this photo.
Anyway of dating approx when this was taken?
Yes guys, I SEE all of the additions to this car. But a date sure would be helpful.
I need all of the orig. photos of REAL tourabouts to use in the final restoration of my car. I have McCalley's and Miller's books also.
I am STILL in need of (2) 1910 running board braces to finish my tourabout. I cannot assemble this car w/o proper running board braces. You start with the frame! PLEASE pm me if you have any (1 or 2). I have to start with the finished frame then I can bring this T back to life.
Thank you again Jay.

I have the proper tail light and a Master coil box like the one in the photo but I will not be using that on the tourabout. The horn mounting this way is proper in my opinion. I have installed them either way on my past cars. I understand about water drainage. But photos of factory cars have shown this way in some photos. Please correct me if I am wrong. My dash pattern which IS the "original dash" has 2 small holes where the horn was and the indention left by the horn forms a sideways "T". So does this tell anyone what type of horn was on my car? The Rubes has a sideways U. I need a dented up horn to restore for my car. The less dents the higher price I know but I cannot afford those on the Bay!
I really wasn't that particular to the make of horn but if I am going to go to all of this trouble I might as well get that right too. I try very hard to get my T's as close to original as I can. The difference with a lot of owners is that you just get them running and then go driven'! Use whatever you have to get 'er runnin'. I do not. I got fed up a LONG TIME ago with you all sayin' that this or that is incorrect! IN THE LATE 70's! That was why I went to all of the judging classes at our Florida meets during the MTFCI shows and became a judge. Yes I saw a LOT of incorrect cars!!! BUT! I didn't go around telling everyone this or that is incorrect. In fact several Senior owners would later tell me "Aw come on Joe! You KNOW what is correct". Yes, if I am judging for a Senior car!!!! If I am not then lets just enjoy each other's cars!!!! I was there to watch the fella with the NICE ORIGINAL FULL RESTORATION rolling his car out of the trailer with 4 (FOUR) tire covers on its tires being hand pushed into judging position! I KID you NOT! It would start and run in place only!!! Some of you guys OWN that car today. I am NOT going into more descriptions about that car. There were a few cars like that then. Today they would be called OVER restorred. YES! I loved the car!!! BUT! I am NOT into that much fanaticism. It is WONDERFUL that someone was though! But we need to leave some room for the others to grow. Like we do at Bloomington with the Corvettes. We got a second on one of those there. The owner... not me! I just did the work. And only some of that. I am not knocking anyone here but we need to have a senior award for almost correct cars too. That way some will want to keep making their's more correct.
I don't need any more Hush Mouth or don't respond
and maybe he'll go away attitudes. Done that here once already. I am sorry to say all this but all I want is help with finishing my cars. Then someone else can DRIVE them all they want. I will have done my part.
Joe in Mo.

Late 12 13 and 14 horns are mounted in the upside down Bell down look. The 08- early 12's were I THINK mounted this way, Ken. And you are also correct about the windshield support rods! I did not see that until I reread your comments. Good catch. I am wondering about the top body irons on BOTH seats. Also the CORRECT top irons. I have seen BOTH the touring and 2 sets of modified roadster irons. Which is REALLY correct?
Sorry for the relist but you all know that AFTER you send what you said off you find mistakes and or AW...I didn't say that right!
Joe in Mo.