Many years ago I purchased a 1915 Roadster from Don Lang. There was some rustout and wood rot. I completely disassembled it, and now, probably 20 plus years later, will put it together. The remains of the wood enabled me to duplicate the pieces either on one side or the other.

I have been able to complete an accurate wood frame. I was able to use some parts from the original body. Someone painted the wood with silver paint. Also at some point, part of the driver top rail was removed. I made a bridge to replace that, and the finished result is not authentic. The rest of the body is, with the exception of a wood support under the passenger door.

The original wood frame was not put together with the degree of workmanship that Rich Eagle displays. For example, angles on some of the pillars were done with sanders and not band saws when Beaudette built it. Also being frugal and maybe a bit lazy, I sometimes cut out rot and replaced wood at the bottom of a pillar so as not to have to reproduce the whole piece.

My next step will be to paint the whole thing, paint the insides of the sandblasted sheet metal, and assemble. I will also cover the deck with 5/8 stock.

The picture of the serial number plate is for Hap Tucker.

There has been a lot of speculation about the kind of wood used by Ford. In the remnants of that ’15 body, I found several different varieties. I know that the two curved rails that go from the door pillar to the dash pillar were made of different woods. One is either maple or birch, the other a hard, very pungent wood. One of the backrest rails was hard curly maple. I used poplar from Lowe’s, and the sills are maple. Any questions please feel free to contact me.

Steve Jelf is kind enough to load the pictures that I took. 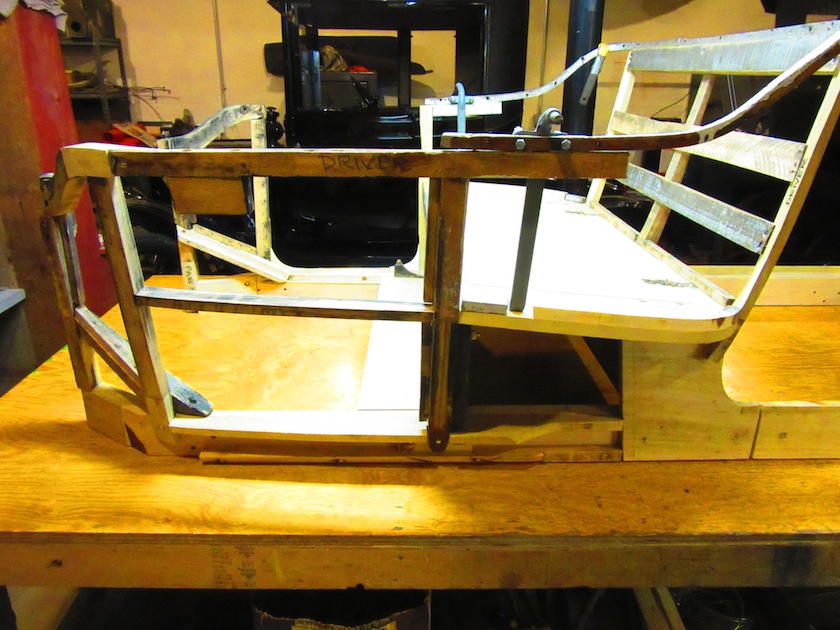 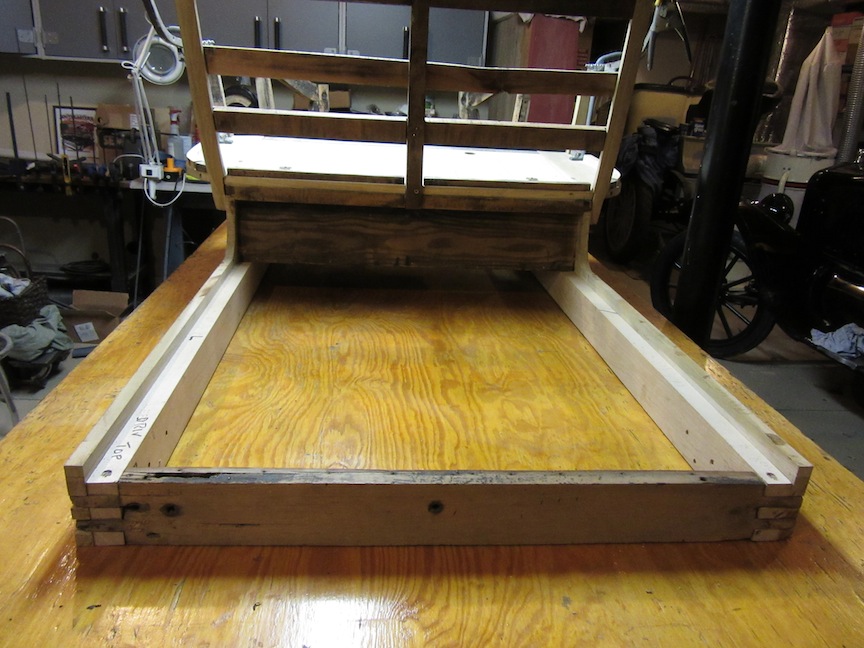 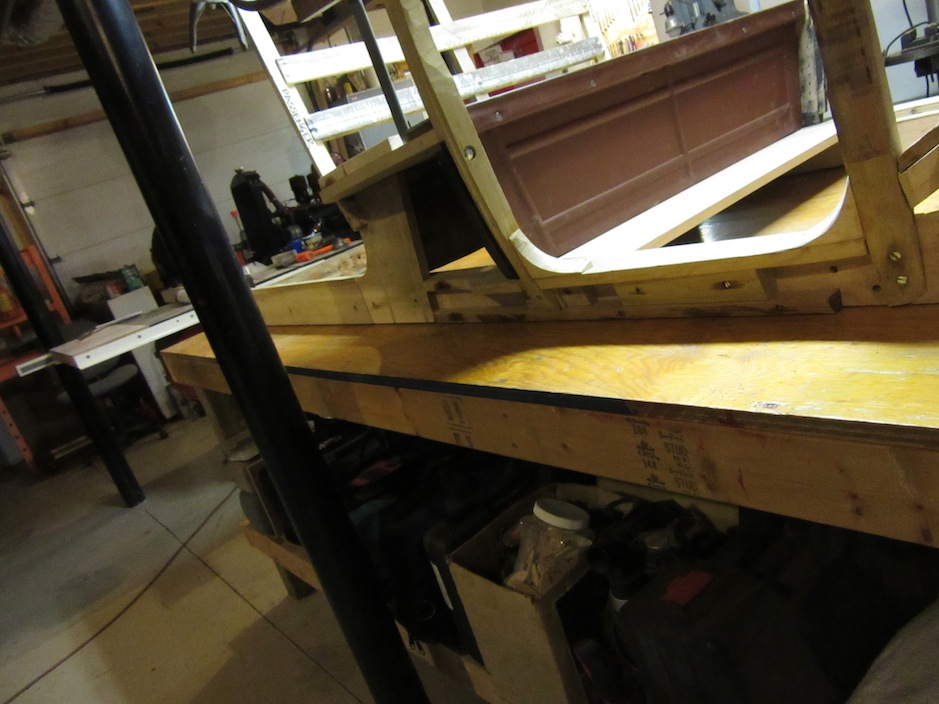 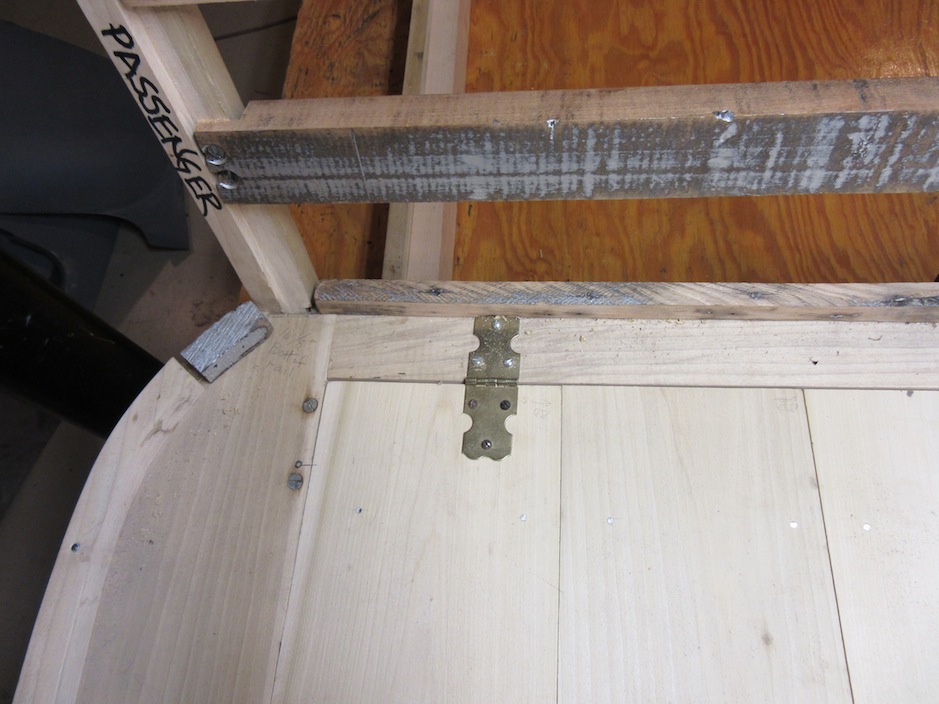 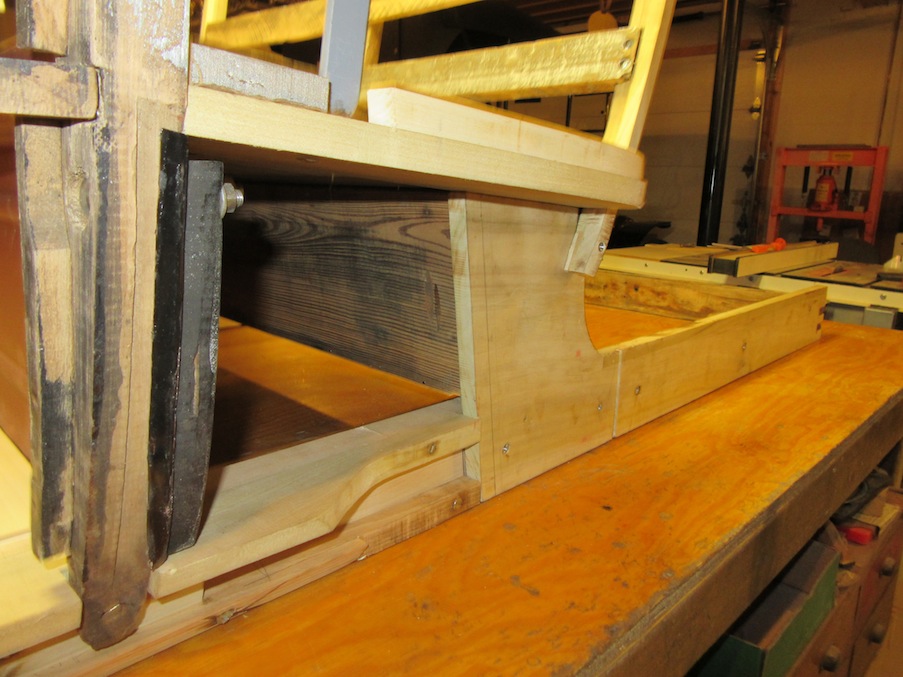 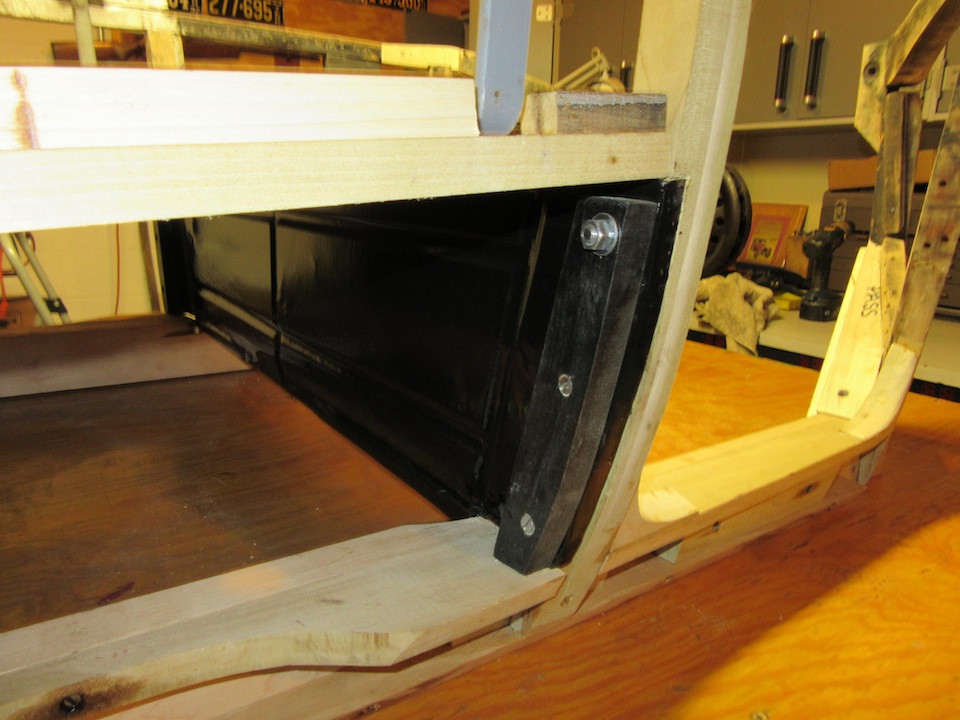 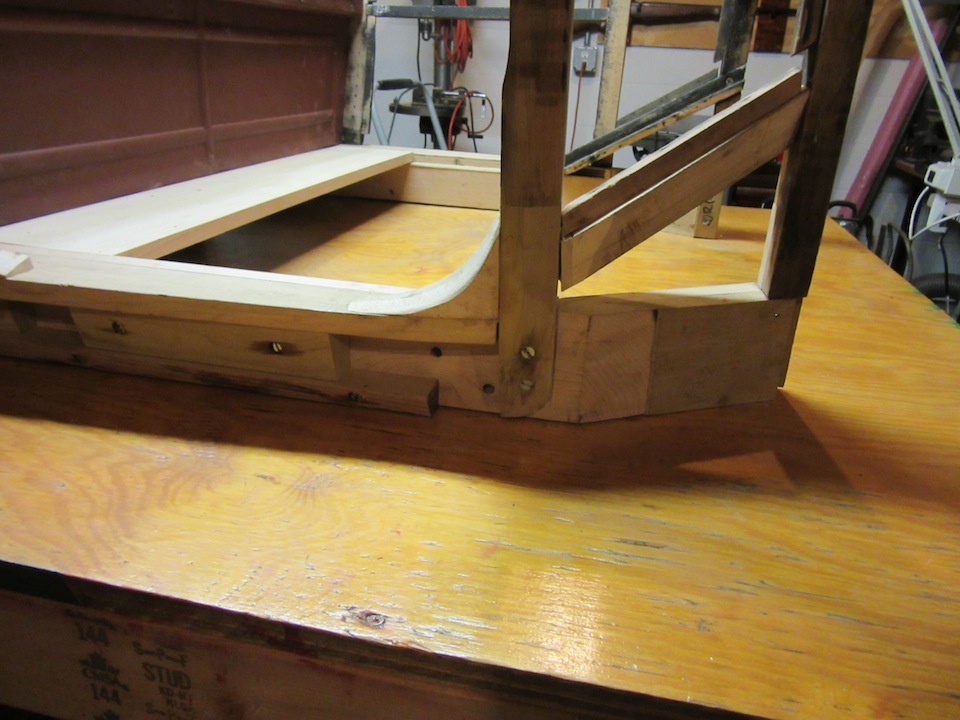 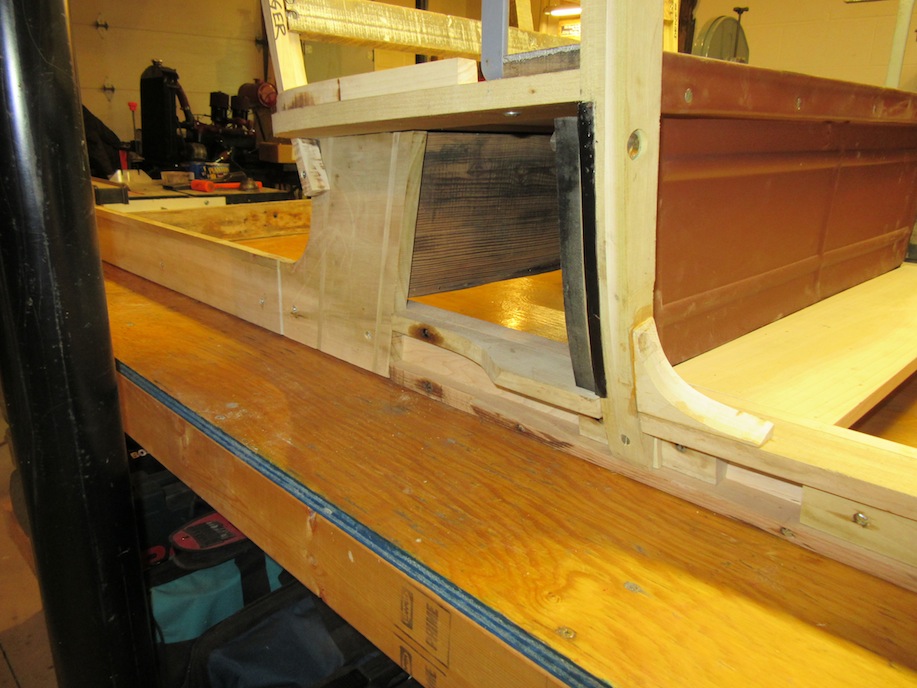 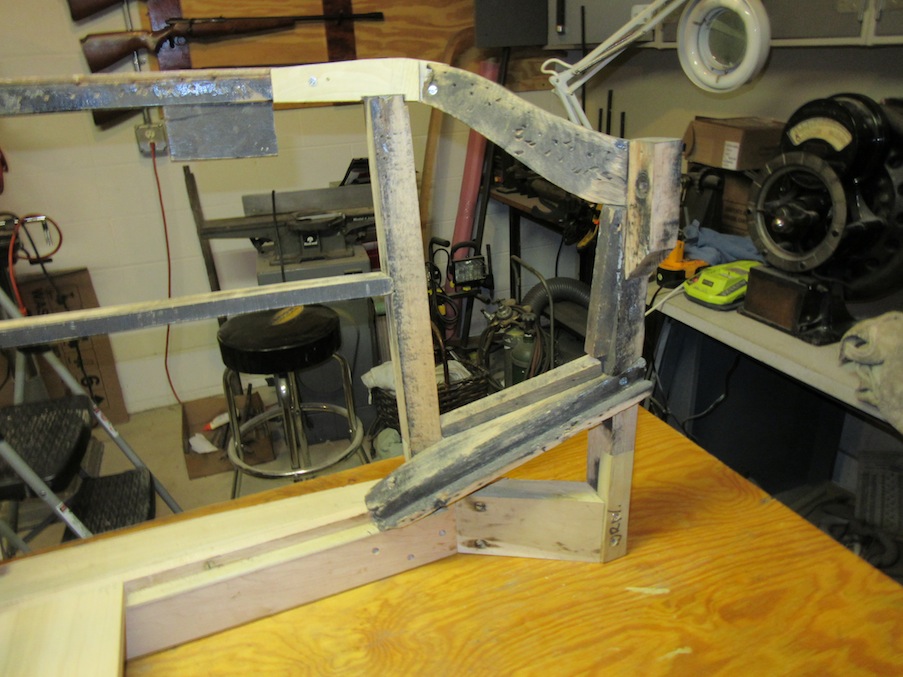 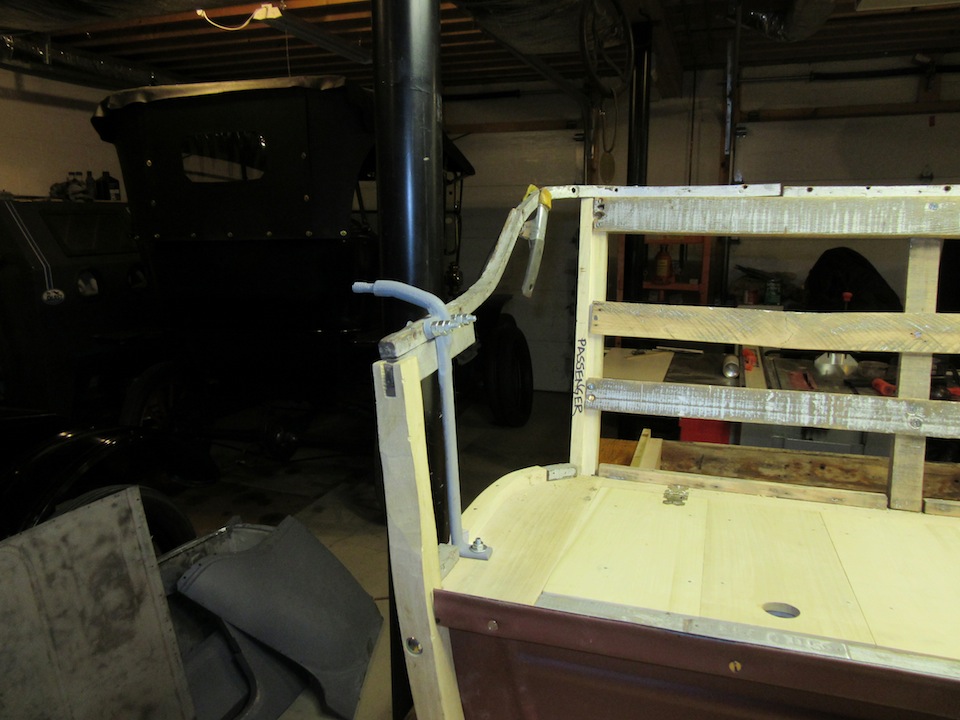 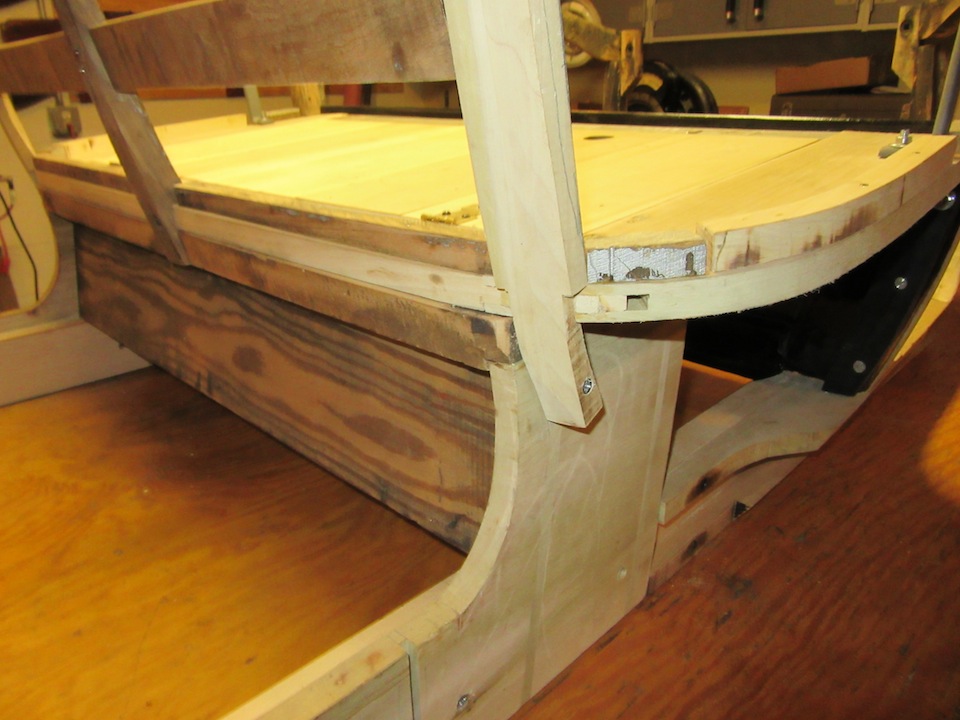 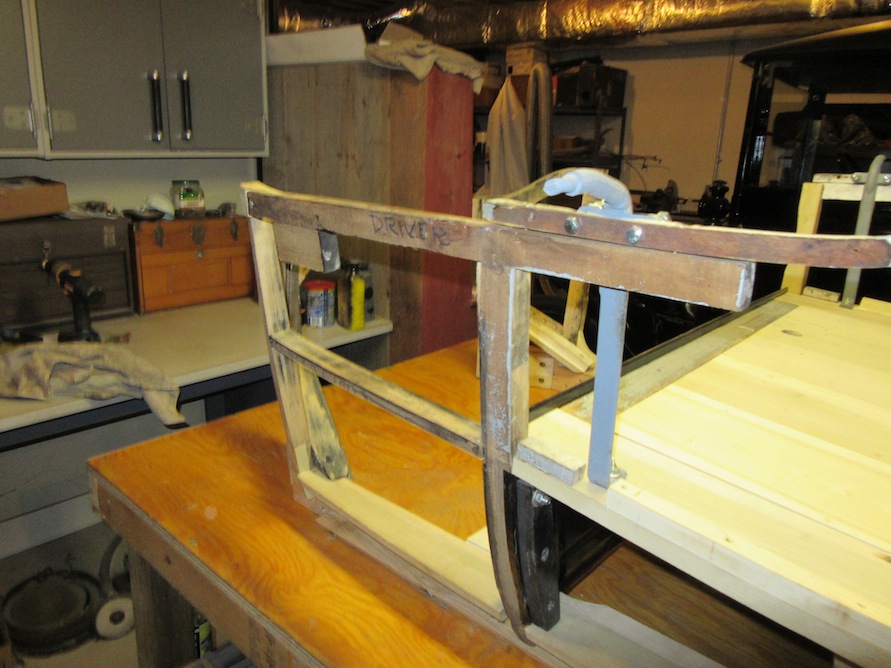 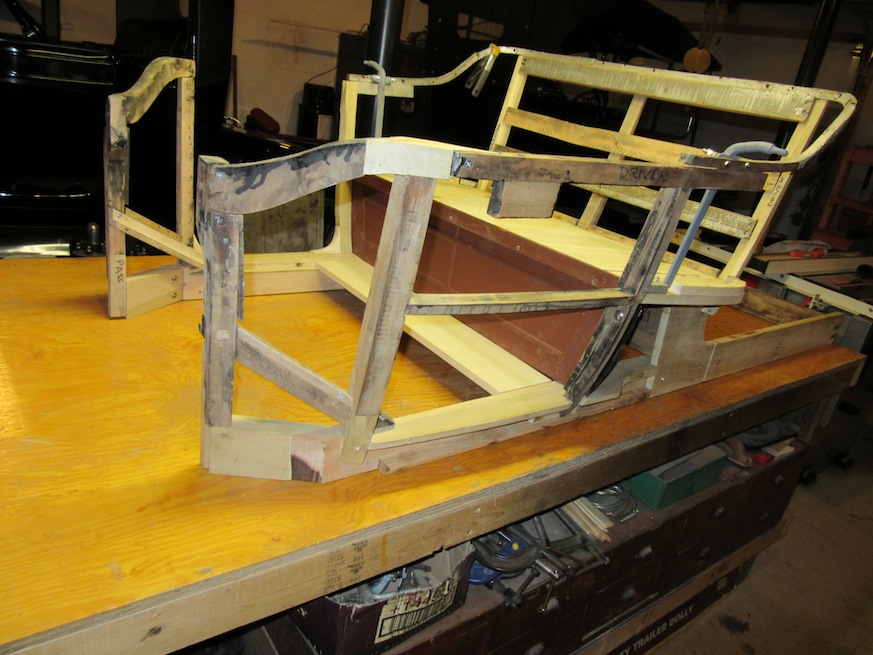 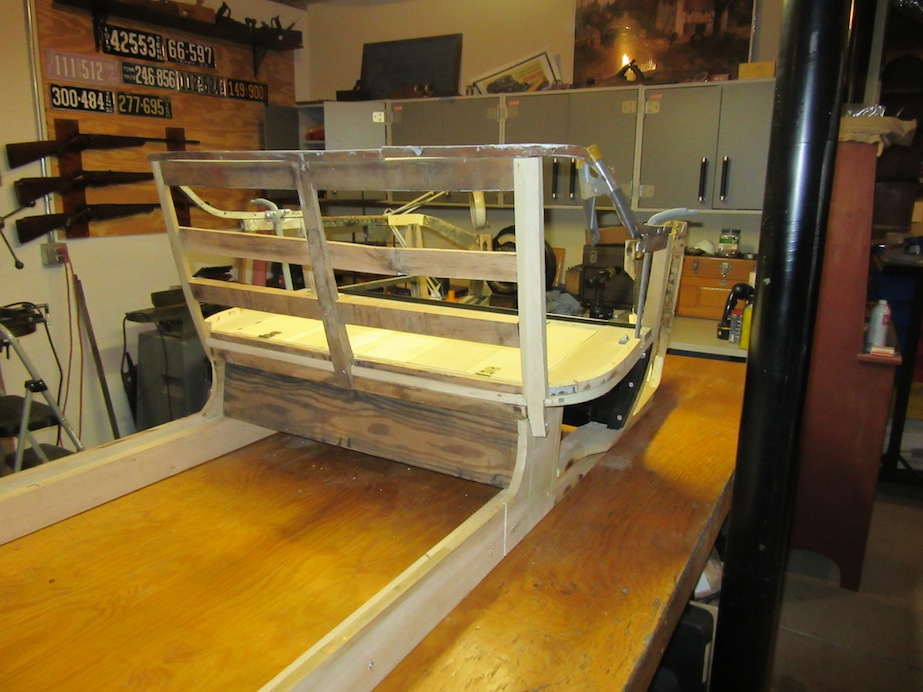 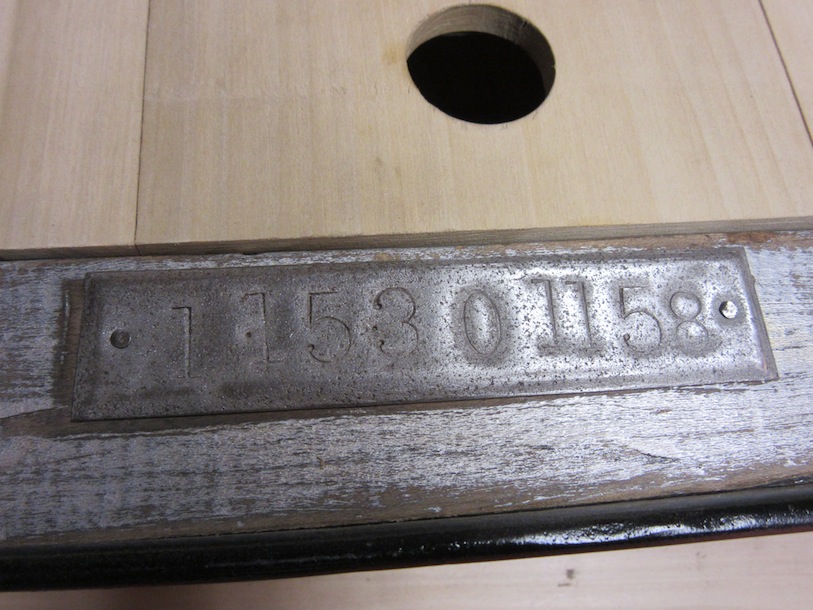 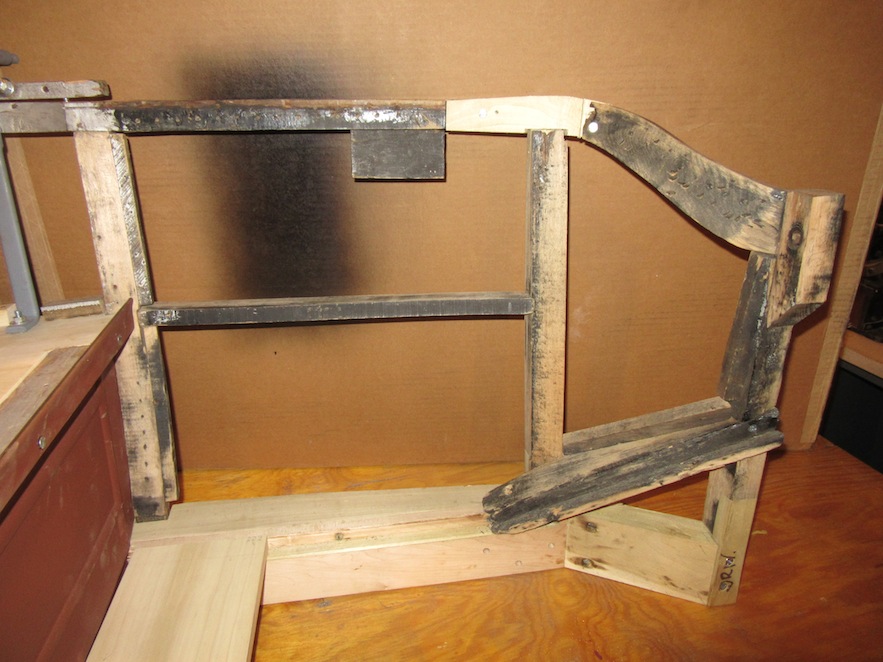 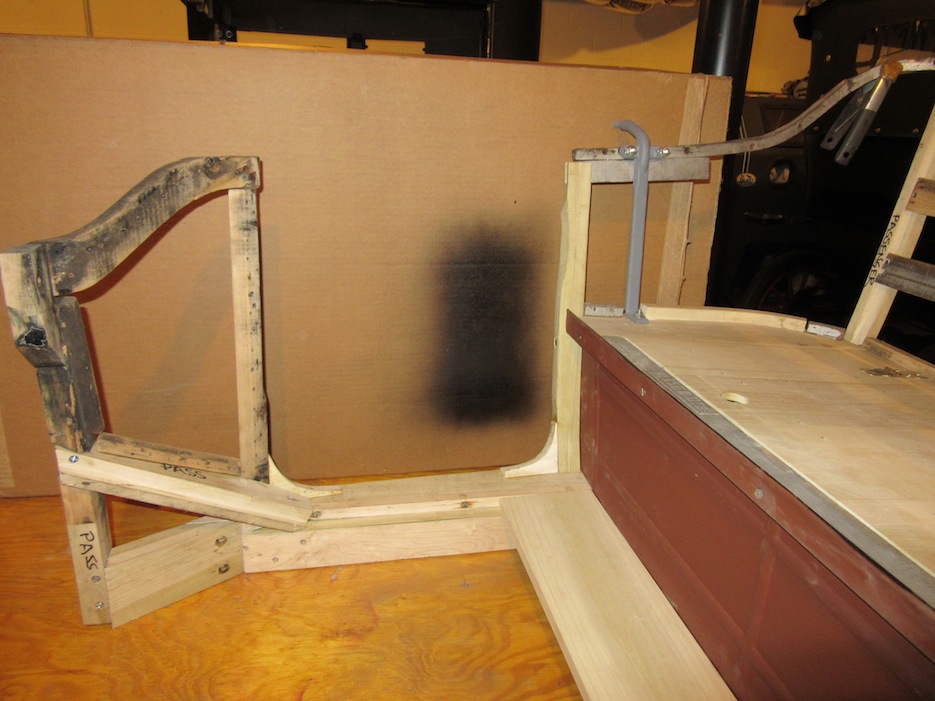 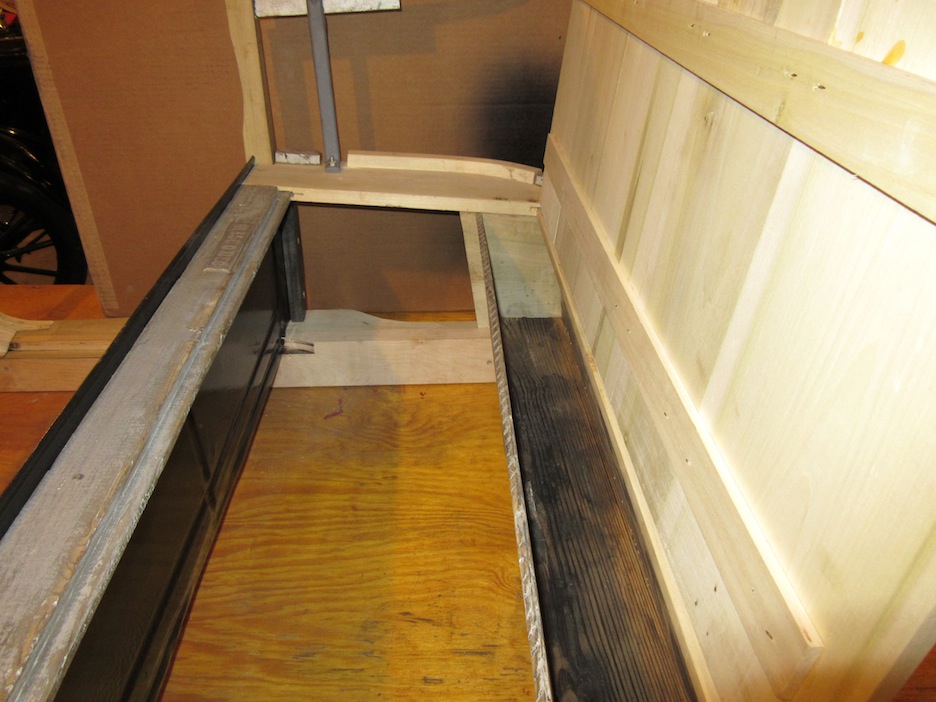 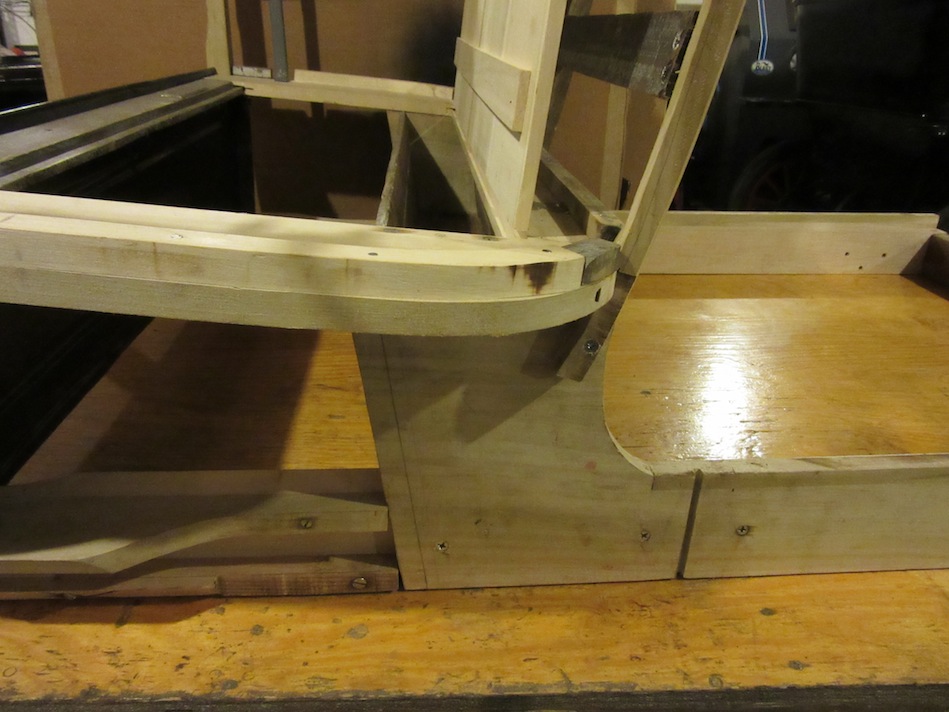 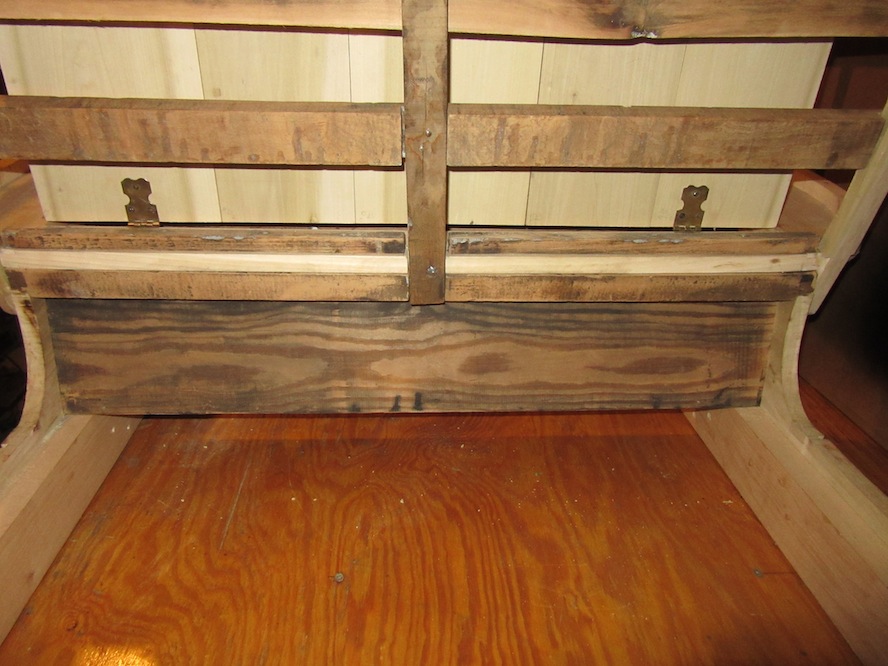 From your shop – it looks like you have been playing with Ts for a long time. Welcome to the forum and ask any of your children or grandkids etc. to show you how to post photos. Once you see how it is done – it isn’t hard. But like borrowing a friends car – if they don’t tell you where the key is located you spend more time looking for the key than starting the car.

Nice work on the body wood. If you or anyone else would like a free copy of R.V. Anderson’s rewooding article of his 1923 low cowl runabout – just drop me a note with your e-mail address and I’ll send a copy your way. The club allows us to distribute those for free to promote our hobby, our club, and to help get a few more T’s back on the road. If you click on my name my e-mail address is the third line down. If you put “Send Model T Runabout Rewooding” in the subject line, it will be read much sooner. It may have some ideas for fitting the door etc. that you would find helpful.

Thank you so much for posting the body tag from your runabout. From the photos Steve posted for you [thanks Steve!] we can see the “B” on the front seat heel panel. [Ok, after looking at the body number tag and thinking that looks like a Beaudett body tag I went back and zoomed in to look and see if there was or was not a letter on the front seat heel panel]. If that is not a “B” or if that is not the original heel panel for the body, please let us know what letter (if any) was on the original heel panel. 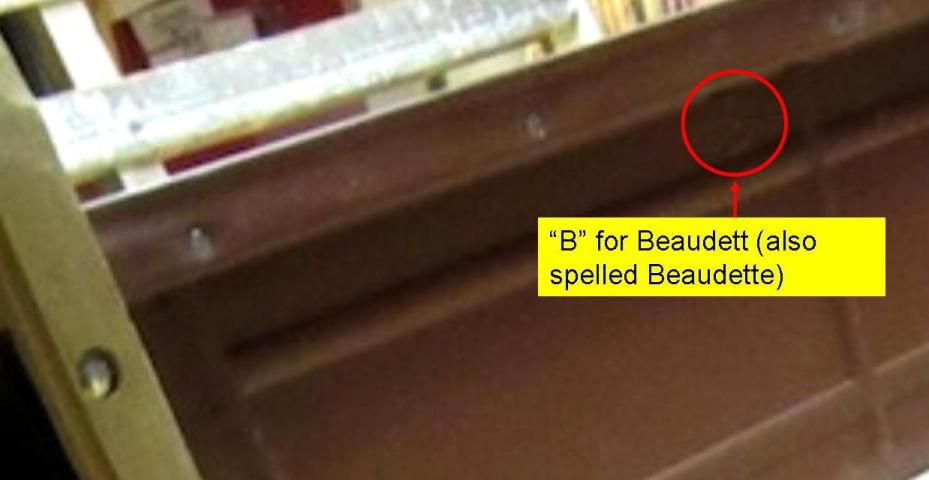 Would you please confirm the body tag was original to the body and not from a different body if you know that information? I believe the 1 dot 15 indicates the body was constructed in Jan 1915. I would love to say the 30 after the 15 was for day 30. But I haven’t gotten enough information or time to make that correlation one way or the other yet. I know I have tried to make it a few times, but from memory I don’t have enough samples to say --- yes that is logical or no we have some with numbers higher than 31, 30, or 29 for the appropriate months. [Note if anyone has a Beaudett body with a similar body tag if they could let us know if their numbers – e-mail or start a new thread etc. we may be able to make some additional progress on this one. ]

Would you please add some additional details about the car when you have a chance? Was it basically a mostly original car when you obtained it 20 or so years ago? What is the day the engine serial number is listed in the engine log book? [Many times that is the date the engine was assembled but it could have been assembled at a different assembly plant at a later date (ref page 501 Bruce McCalley’s (R.I.P.) book “Model T Ford”) . Sometimes on that same date the engine could have been placed in the car -- “IF” both were assembled at the main Highland Park Plant. Or it could have been a little later even at the Highland Plant and definitely if the car was assembled at one of the Branch Plants. or a different date – if assembled at Highland Park as well as any Branch Plant) ? See pages 510 & 511 of Bruce McCalley’s (R.I.P.) book “Model T Ford” or post your engine number (feel free to xxx the last three digits [I don’t need that level of detail for the research and it will get me within a day of the actual engine log date.] Also the casting date. And did the car have the early 4 rivet front fender brackets and 1913-14 style rear axle or the later 1915 rear axle with the smooth backing plates etc?

Finally are there any indications that a bulb horn was originally mounted to the horn mounting block on the false driver’s door area?

Again thank you for sharing your about your T. It is always and encouragement to many of us when we see someone putting things back together.

Those are great pictures and a wonderful reference for those who follow. It is so nice to see the original pieces of wood.
Good luck on your continued progress.

To answer Hap's questions: Yes that's the original heel panel that was on my '15 body. The B is embossed on the top.

That body tag was on the body when I got it. I pried it off, wirebrushed it and put it away for safe keeping. I put it back on the car in nearly the same place. The original nail holes had broken off nails.

I wish I could help with an appropriate engine but this car had a July 1922 motor.

The horn attachment block has no holes. It's still attached with the rusty screws it came with.

My main objective in loading all of this is to help anybody searching in the future. I spent hours looking for an all wood '15 body picture.

Dave - It looks mighty nice! Thanks for posting it.

Did Ford paint the wood during assembly to protect it? I see evidence of black paint on some of those pieces. When my car was redone, the wood was left totally bare, even under the turtle deck. I was just going to paint all the unprotected surfaces flat black. any thoughts?

They didn't paint during body assembly, but everything was painted after assembly with the flow method - including the inside. After upholstery another coat of varnish was applied.

Thanks for that info Roger, greatly appreciated.

Thanks for the pictures. Really helps with some repairs, on my 1915 touring, I need to do. If anyone has pictures of a 1915 touring wood like this, I could sure use them.

Richard
Send me an e-mail. I have pictures of of my early 1915 touring wood. Remove the no-spam.

Dave: Do you have any patterns for the backrest pillars?

Leon: I sent you an email.
Dave

looks good Dave now I know what to do when I restore my grandfathers 15.