The head lights on my 1920 Runabout have two sockets in each. One in center, with two pins and one above center with two pins. I've never seen ones like these before. What can you tell me? How are they wired?
This was originally a non-starter car.

The two bulb headlights are for a car equipped with a generator and starter. Here is the wiring diagram for one of the starter equipped cars: 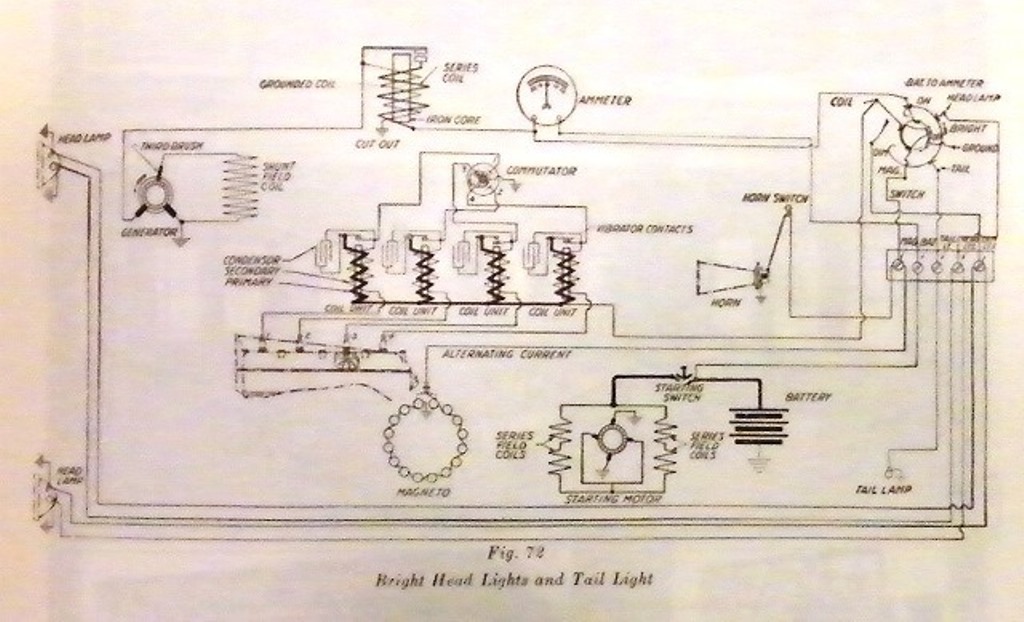 Gordon your car originally came with single bulb magneto lamps. The wiring diagram for your car would have been like this originally: 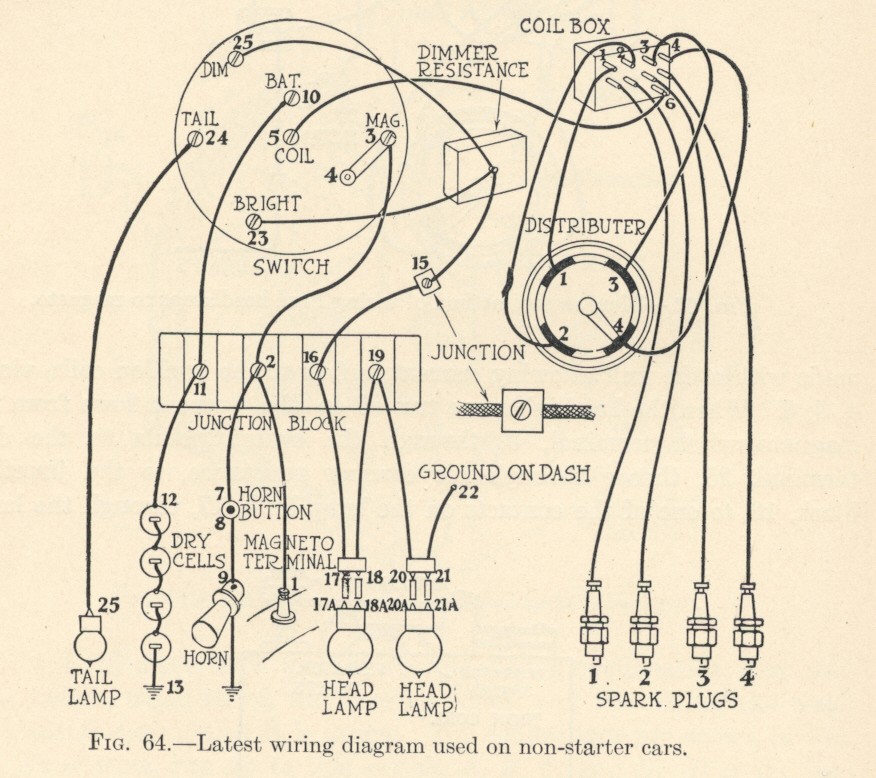 Ok I have been staring at diagram 64 and something doesn't seem right but I am probably wrong.
Terminal 23 and 25 are going to the dimmer resistor, then one wire goes to the junction block then to the bulb.
My question is should one wire go to the resistor box giving you low beam and the other go to the junction block giving you high beam or am I missing something?
Also why are the bulbs wired in series?

Mike, on the non starter cars the headlamps were fed from the magneto. The magneto varies from ~4 to 30 volts in output depending on engine rpm and that variation is very hard on bulbs if you want to get some useful light out of them at most of the rpm range. It got much better when Ford added the dimmer coil some time in 1918, so the highest voltage peaks were eliminated while the low voltage wasn't stopped much at all when the high beam part of the dimmer coil was used. The other input wire gave low beam = more resistance so less voltage came to the serial connected bulbs.

I think all years of non starter cars used 9 volt bulbs connected in series, but I'm not sure?

Mike,
I saw that also. If you lose the head lamp or connection between/fed by terminal 16 you lose both headlights.

The two bulb headlamps were used in the 1919 and 1920 starter equipped T’s. They were battery powered. Dual filament light bulbs weren’t available, or at least not used by Ford until 1921. Thus two single filament bulbs were placed in the headlight buckets – a low candlepower one for DIM and a high candlepower one for ON. With the non-starter cars, beginning in 1918 a dimmer coil was introduced which had two settings for dim and bright. The column mounted twist style light switch (1918-22) had two wires which connected to the dimmer coil in two different places on the dimmer unit, thus providing different amounts of dimming. From there one wire went to the headlights, wired in series. These were single bulb headlights and were magneto powered.

My problem is that I forget that the Model t was built in an alternate universe where the rules are different.

I was thinking that one bulb was for dim or low beam and one was for bright or high beam.