Last week I spent some time in Northern Wisconsin getting a 1924 Model T engine to run. It was converted into a saw mill power plant. The engine has not run since the War, but works good now. We found the saw blades, arbor shaft and tensioner, but most of the lumber that was used for mounting this equipment is either gone or rotten. This fall we are planning on attempting to rebuild the saw cutting end of this unit. I'm looking for information, pictures or drawing of a stationary Model T engine saw mill, for guidance. 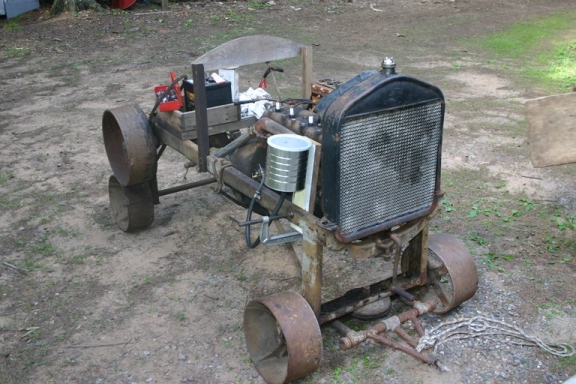 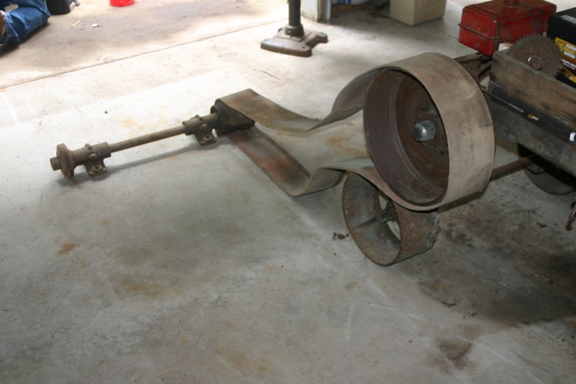 I have more text and some pictures on the MTFCI site. Thanks Mike

I just finished refurbishing a T power unit and have a T-based sawmill in the queue waiting restoration (need to knock out a T-based sickle mower first). There are pictures of it on this link (one of the 6+ doodlebug threads we've been running over the last two years). It might give you some ideas on how to set up your pulleys, cutting tray and blade.

Halfway down the thread are the pictures I'm referencing. I'll probably be rebuilding the wooden mounting system in my basement next winter.

Are you talking about a saw mill or a buzz saw?? News flash// A model T engine has not enough power for a saw mill?? Bud in Wheeler,Mi.

I don't know saw mill or buzz saw. I do know that that this unit was made to cut the lumber to build the house on this property in 1931. So it had enough power to cut the 6x8 foundation lumber and all the studs, joists and rafters. Our intension is to cut fire wood with this unit. Mike

The power unit I just finished restoring ran a 30" saw. The blade on the saw rig I'll start refurbishing this winter is nearly 48". 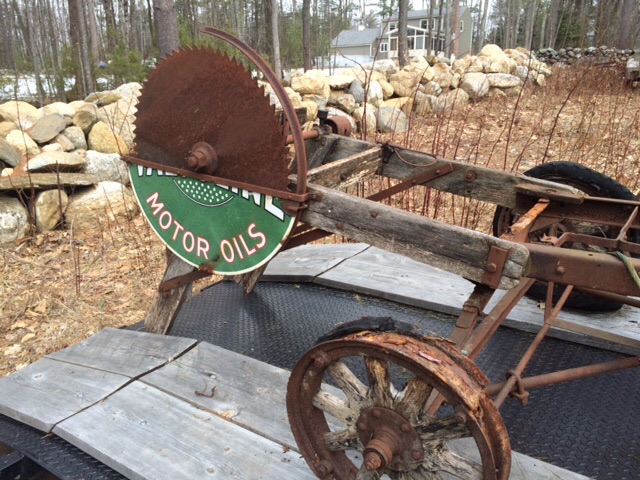 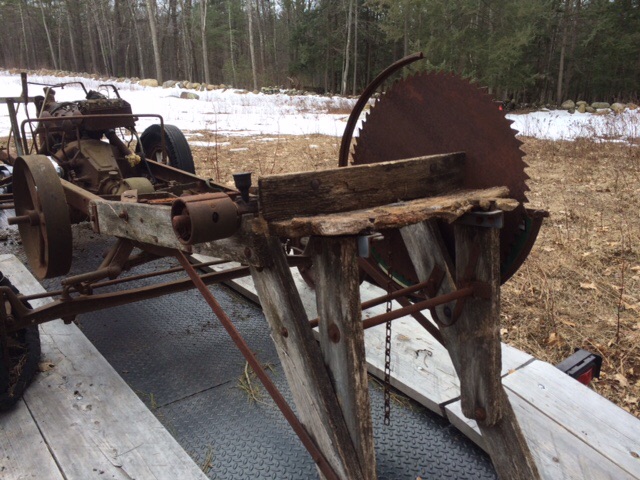 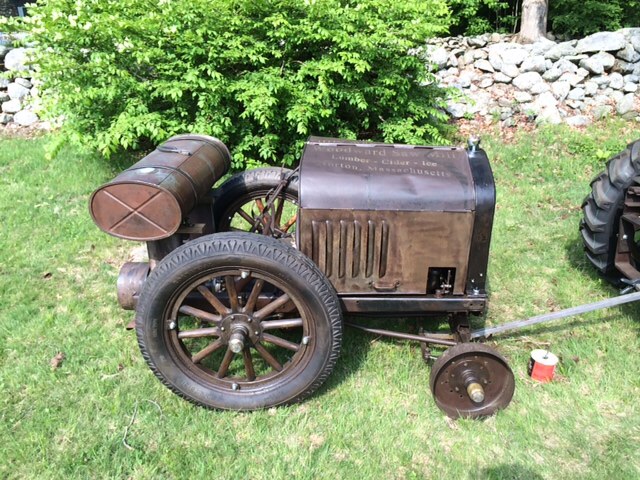 This video might give you a couple ideas too. It could be scaled down much smaller for sure.

Here is a pic I found online too: 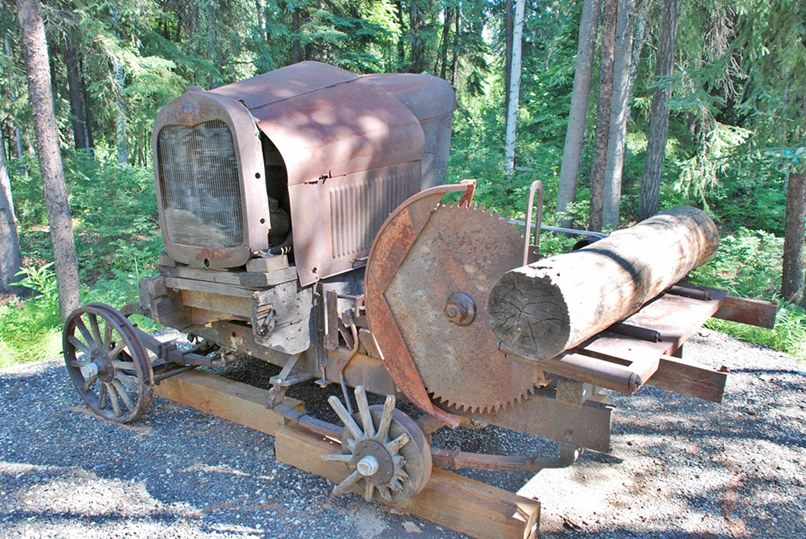 Mike, would also love to see more pictures of the power unit too if you have them.

Guy's,Those are buzz saw blades pictured.A lumber saw saw mill blade is a ripp saw and much much more agressive! The old farmer on the next farm had a sawmill with either a 54" or 56" blade with a 36" top saw he could use if needed.He could power the saw inside with a 22/36 with a 110hp Wakaushaw or a pto outside with a farm tractor or both at once!! With under 35 40 hp if your sawing over 8" the blade would heat and the lumber would not be very straight.The 110 hp engine did a good job.Bud/been there and did that. Bud.

Sorry about going on and on but Lumber saw blades or saw mill blades are insert blades with replaceable teeth.Bud in Wheeler,Mi.

To be rude. There is a difference between a saw mill and a cross cut (buzz) saw. I have to agree with Kenneth WD. Sawmill is used to cut logs into dimensional lumber. A crosscut saw (buzz saw) is used to cut billets or small logs into small dimensions for fire wood. The examples pictured are buzz saws. 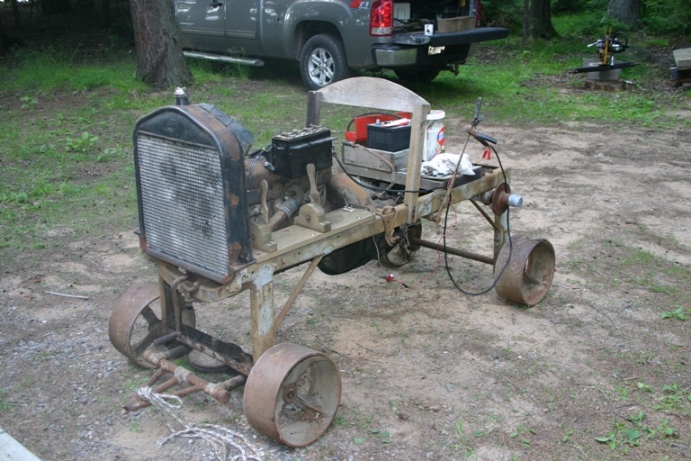 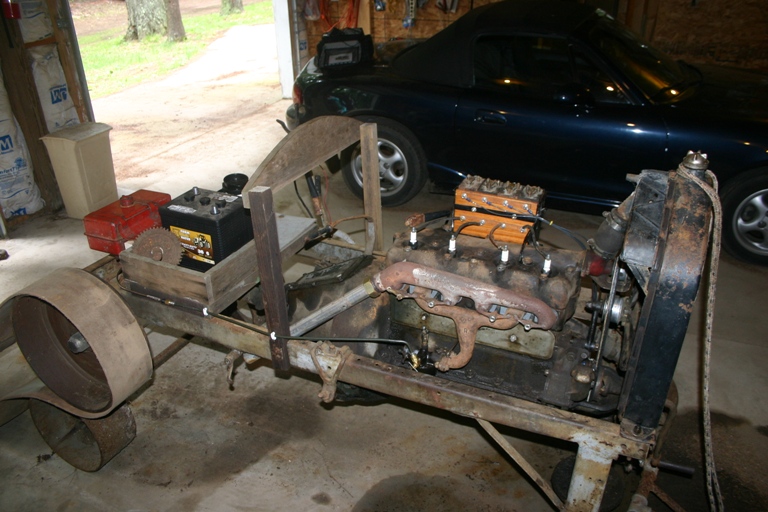 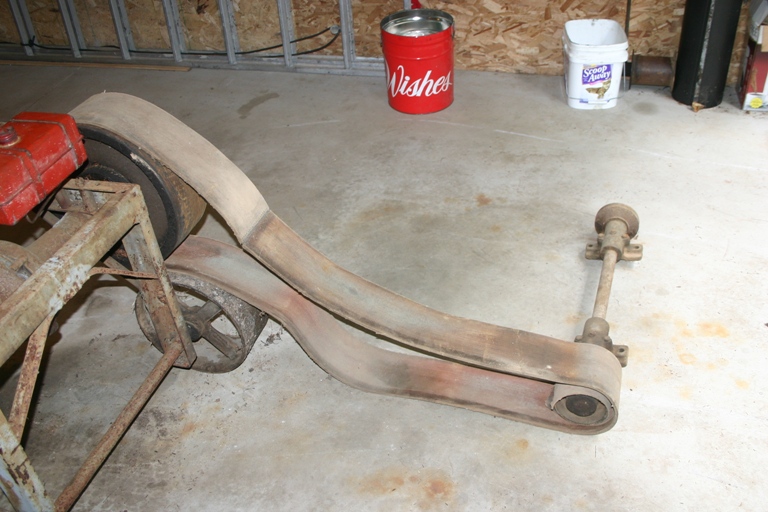 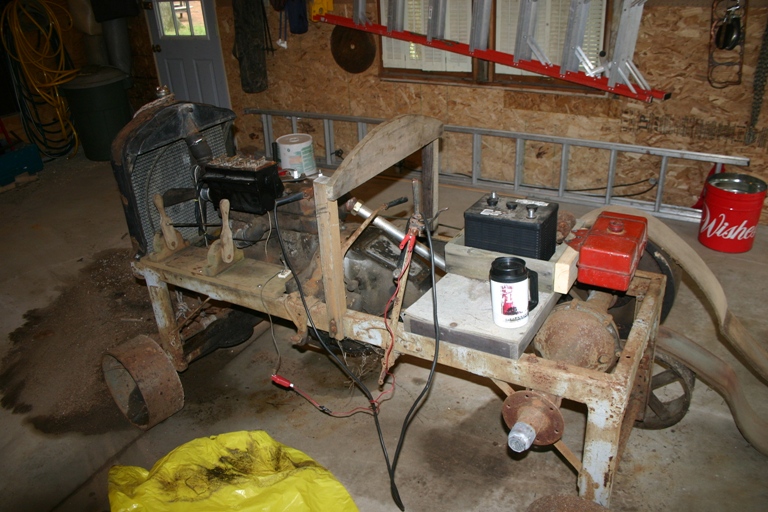 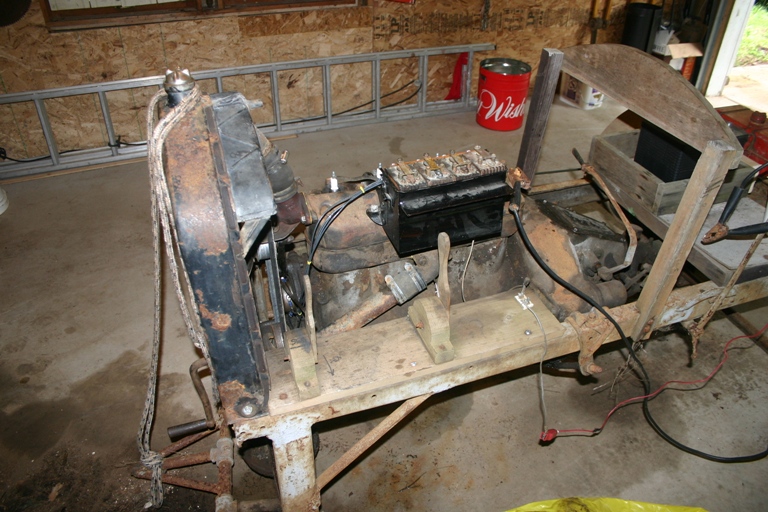 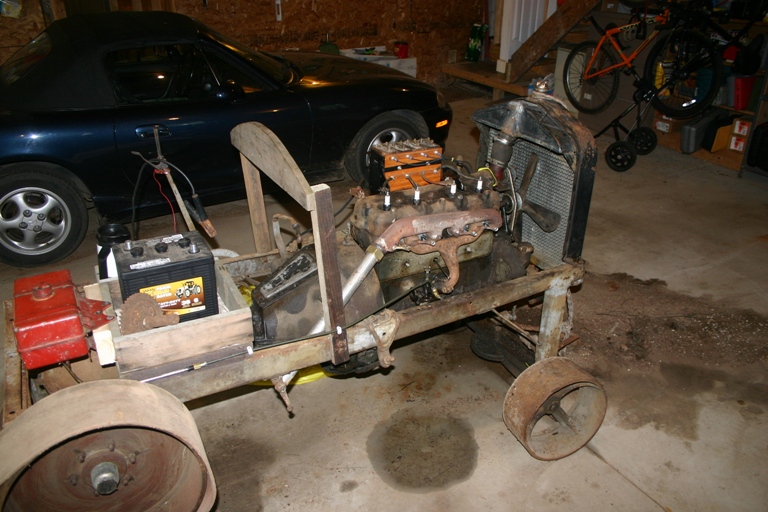 You're not being rude George! I appreciate the information and will start referring to both of mine as buzz saws.

Bud - you never "go on!!" I always learn a lot from your postings.

To be honest I don't know exactly if this is a buzz saw or a saw mill. But I do know that this was used to cut the lumber for the 1931 house on this property. This property didn't have electricity until 1948. And things were a little hard in 1931, so I'm sure that this was a cost saving device. Maybe they cut slowly when making the dimensional lumber. In fact it could have been both. They would heat the house with wood, so after the house was built the saw could have been a buzz saw. Who really knows for sure, most of those people are dead. Anyway, we had a blast getting this engine to run and hopefully we will have a 'BUZZ' saw this fall or winter. Mike

Mike,Look at the blades you found and did you find a carrige?? Yup i would agree times were hard and i wished i had the [Jeep] the old farmer built!! I was clearing ditch bank with small trees,brush and he told me to use his[jeep]!! Hand built it had a model T front axel with wood spoked wheels demounted running on metal fellow's.The steering was T and the power was a Clinton 5 hp gas engine hooked by belt to a 26 chevy trans and rear end.The frame i think was T with boards on top for a deck.When you drove it you sat on the deck with your feet over the edge. It had about a 20" buzz saw blade on the front and you could cut your wood and carry it home with you!! I don't know what happned to it but it sure was handy!!!!!!!!!!!!! Bud.

Mike,
If your "Buzz Saw" was set up like a table saw (and with the arrangement you show, that IS a possibility), you could cut dimensioned lumber with it--not easily, but it could be done! I used one to make oak firewood into oak planks (small ones, though) so I'd have quarter-sawn oak to make some telegraph sounder boxes. It CAN be done!

Mike, I can't tell from the photos if you have governor to automatically throttle the engine as the load changes while sawing. You probably will need one to make your rig practical; unless you have someone adjusting your throttle lever while you saw. See this well-made video of an old rig with a very simple governor that uses the radiator fan air flow to actuate a lever that automatically adjusts the throttle. It's pretty neat. (so are the other videos about Bud's stuff)

Have fun and be careful!

Wow, lot of information since yesterday. I didn't know there was a difference either in saws. Anyway, no one is being rude, we are all here to learn and talk about it. I just figured either term meant it was going to use a Big As_ blade to cut wood. I am sure in the future I'll still screw the terms up. But thank you for the heads up.

well the very early circle saw blades for lumber were made the same as the "buzz" saw blades. We are talking some of the oldest.Not smooth lumber,heated and such. The insert bits was a big improvement and allowed the saw to have breathing room between the wood.

So do I see an early 6 rivet rear axle under your find? Scott

Mike, I think you confirmed my thoughts of why this rear axle I have was shortened. I figured after a while it had to be for a power unit, but was not totally sure.

Thank you for the extra pictures. 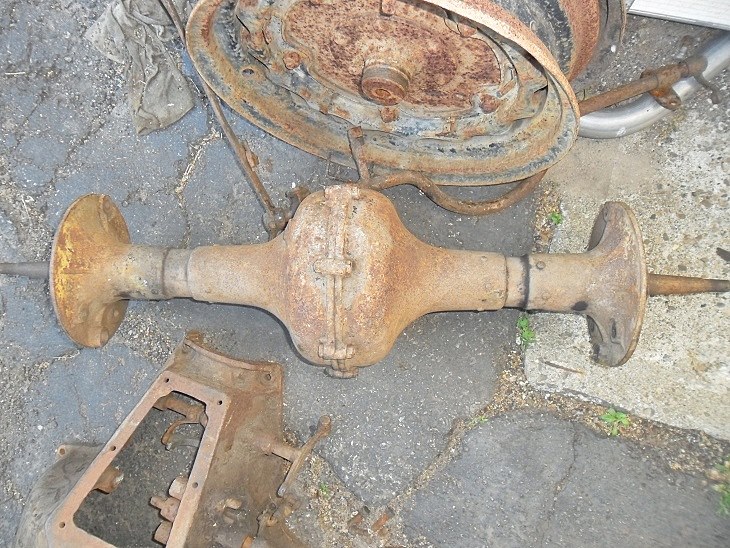