How do you replace the window glass channels -T#8399 on a 27 coupe? Are there clips? Mine have been replaced with a non-original piece that they glued in. Do you have to pull the door panels to do this job?

You will need to remove the door panel, the trim and the window. The original channel is held in place with a hook at the top and bottom and sometimes one in the middle too. The last time I replaced mine I used the top hook but for the botom I used a sheet metal screw. You will have to rivet the hooks to the channel and the replacement hooks are too wide and will need to be cut down to fit. Good time to replace the original glass with safety glass if it isnt done already.

The front and back channels are cloth covered but the top one is rubber. New rubber is available but you will need the original metal channel that the rubber fits in.

Thanks Jeff. Unfortunately the top rubber channel was also replaced with the same type of channel as the sides and glued in and so the original metal piece that the rubber fits into is missing. I don't think they are being reproduced. Any suggestions as to fabricating something that would do the job? Can anyone post a photo of what this metal piece looks like?

The metal strip for the rubber is about 1/2" wide and has the cross sectional shape of a clincher rim. The rubber has the same shape and it slides onto the strip.

A little secret regarding the 26-27 coupe door, it is the same as the 28-29 Model A pick-up door. So many parts like window regulator, glass channel, bumpers, trim around the window, etc., are usally available in the model A section, and in the case of the window regulator and glass setting channel, the Model A version is a higher quality.

I was wondering about the same thing: originally the front and back of the windows were the cloth in metal channel and the top was rubber?

I have no metal channel for the top rubber to fit in so, does the model A reference also apply to the TT truck? 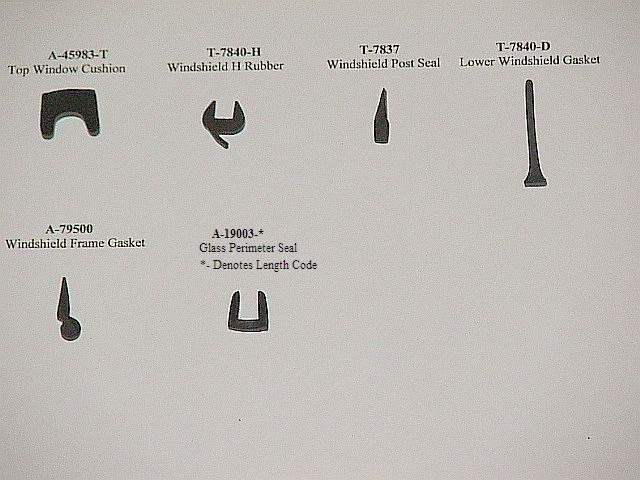 The top left is the upper window seal. It's the same for the closed cab TT Michael.

I ordered the bumper that sits on the middle frame-post at the bottom of the window housing (ie. door).

I order some of the window channel (metal frame with cloth, velvety material that the window slides in up and down.

I do not have a metal channel that the upper rubber goes in.. do I need it?

And how is it supposed to join with the channel material at the top corners of the window? I can't picture that since the window opening in the door is rounded in the corners..

AND.... what was the material that was used to pull the window up and down? That hooks to the knob to hold it there? I read that it was wool but I am not sure and wool seems to be too floppy?

On a 27 coupe, the window goes up and down by a handle driving a receiver that clips in the bottom track on the window.

The top channel just butts up against the window channels - they are inside the door structure at that point so you do not get a leak. They look like in the following picture. You can see the rubber still in the channel. Note the 3 screws that screw into square nuts placed in the recesses in the door. The first picture shows one being unscrewed. 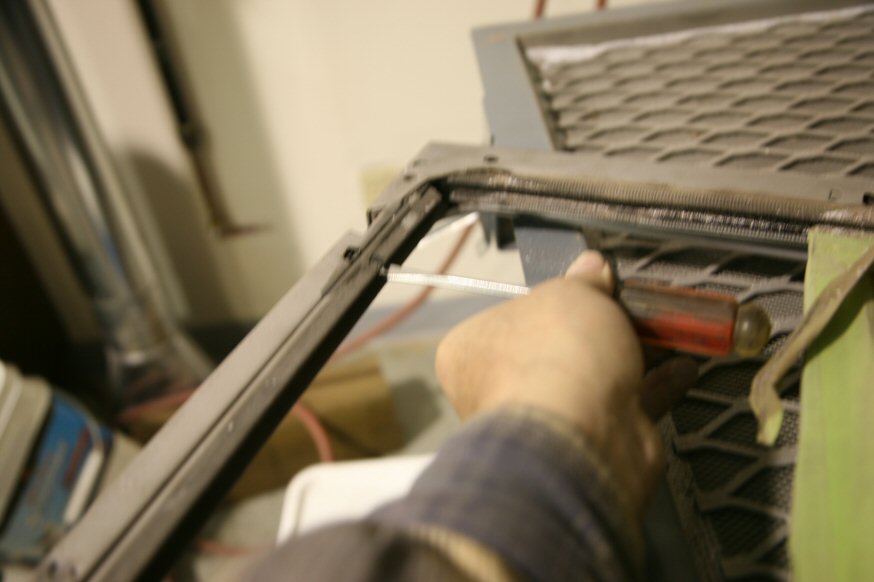 You probably need the upper metal channel. The metal part at the top looks like this: 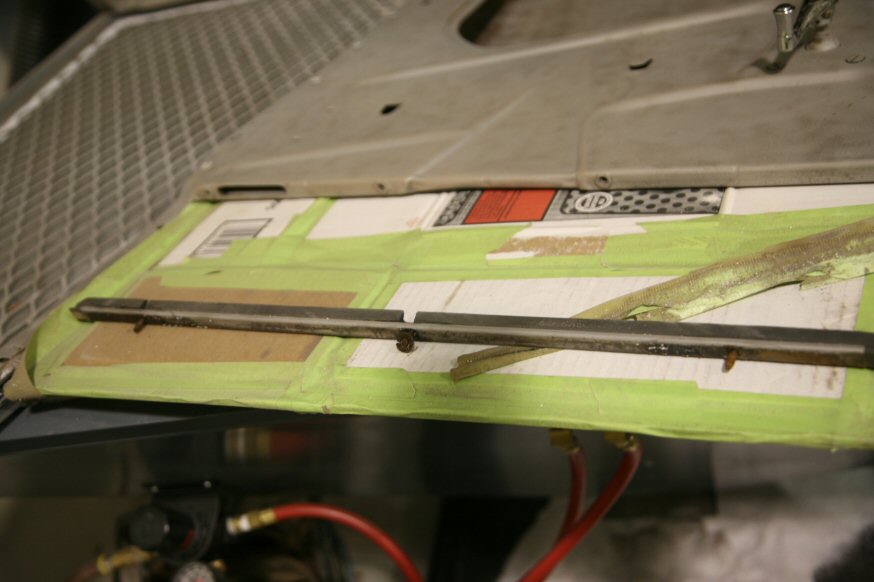 You could get the rubber material from the parts supplier and then make the metal channel.

AND.... what was the material that was used to pull the window up and down? That hooks to the knob to hold it there? I read that it was wool but I am not sure and wool seems to be too floppy?


It was 2-ply seat material sewn around it's perimeter. I think it was the lacquered cloth like that used on the truck seat but I have heard of variations. Some say wool from the closed car upholstery was used but I don't see why it would be used in the trucks. But then there's no mention of carpet in trucks either but it had "carpet snaps". ???

I made some window lifts out of leather. 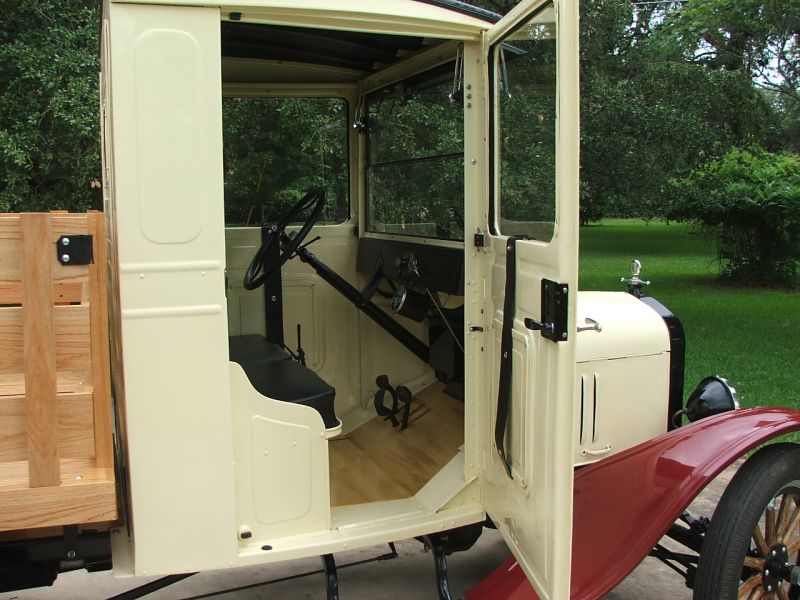 Looks like you used some grommets for the holes in the straps?

Yes, there were three grommets in the strap. This is not my drawing but it shows the dimensions of the strap. The riveted end loops around the pin on the glass bottom rail.

My suggestion is to not put the holes and grommets in until you've checked the fitting with it mounted on the pin. There's a down, middle and up position for the grommets. Make sure the up position holds the glass against the top rubber. 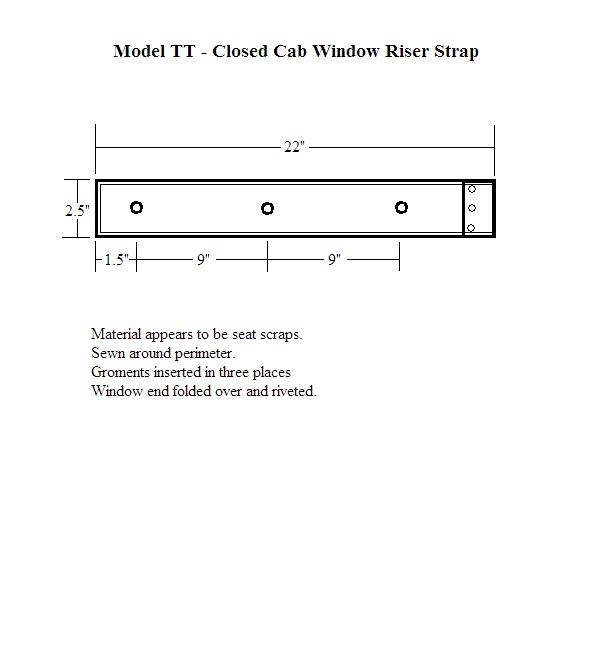 Now I know how it is supposed to be!

How is the door glass and regulator removed to replace the side and top channels?

You do not need to remove the regulator.

Roll the window all the way down and free up the channels at the sides so they flop in the breeze. Then go close the garage door and warm up the shop

Next, roll the window almost all the way up. Assuming the door is off the car and laying flat, from the inside of the door, pull the window up at an angle. This will allow the roller on the regulator arm to disengage from the track. After that, you can pry off the channels as needed.

When I replaced the glass in my 26 coupe I removed the regulator first. Robert's method sounds good too, but this is what I did.

With the window down , loosen up the old channels like Robert describes. Run the window all the way up and remove the 3 regulator screws, push regulator inside the door and let it drop to the bottom of the door. You will need to prop up the window so it does not fall. Lower the window enough to see the slot in the glass retaining strip and slide the regulator off the strip and remove from the door. Now you have no interference with removing the glass, lift up and while tiliting the top it should slide out easily.

Once the glass is out you shoud verify it is safety glass and inspect the glass retaining strip on the bottom edge of the door. If you need to replace it order the model A 28-29 pick-up retaining strip not the new Model T strip, it is wrong. The retaining strip has a recess for a rubber weatherstrip, it is the same as the closed car windshield weatherstrip. You need to put it on when the glass goes in the channel. I had a glass company install a new retainig strip on new safety glass but did not give them the weatherstrip, I was unable to install it afterwards so I left it off. This is not the glass setting tape which has to be used to attach the retainig strip to the glass, this is a rubber piece that seals the door when the window is up. My original was rock hard and had to be broken into pieces to allow the window to come out of the door.

The upper glass channel goes on last, I know you do not have one, but when you do, there are 3 floating nuts in the top of the door that the strip screws to. If the nuts are missing you can use a U type tinnerman nut.

The metal door trim that goes around the window opening slides over a sheet metal track on the front and back pillar of the door and has 3 trim screws at the top. There is also a pocket for a heel shaped rubber door bumper that goes on the top edge of the door. These are all available as reproductions for the 28-29 Model A pick-up and are high quality. If you need more information on any of these let me know and I will describe further.

I've been gone for a few days and look what has been posted in my absence! I have a 26 Coupe that has had the channels replaced incorrectly and had no idea how to fix them right. Thank you to all for the above posts!!
Noel

I have ordered the new channels and will be working on them soon. One other puzzling thing has come up regarding the window regulators. The driver side regulator is secured with 3 screws while the passenger side uses 4 screws. I understood that the 3 screw kind is correct for the T. Is the 4 screw kind from a Model A?
Both regulators seem to work OK.

You need to trim the length to fit. It can be too short but not too long.