I have a FORD script, brass tire pump. Is this a correct Model T pump? If so, what years? Where can I can get correct leathers, hose and tire inflating end for it? Thanks for all the help that I receive on this site!! 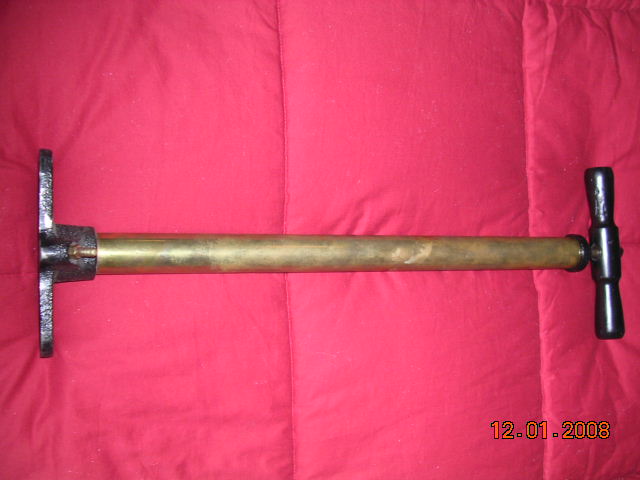 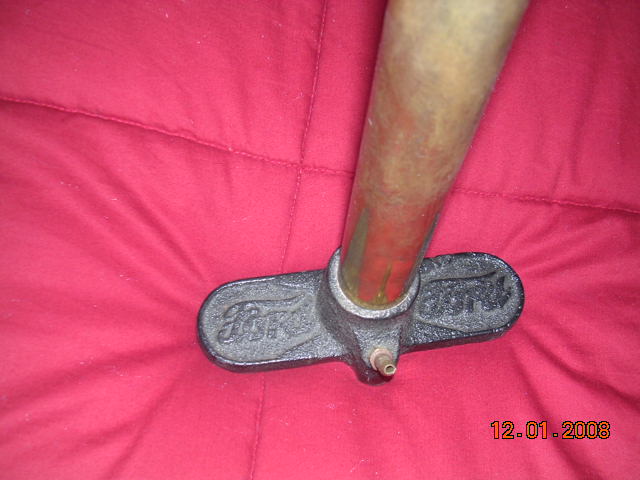 There was a series of articles in "The Model T Times" (Nov-Dec 2006, Jan-Feb 2007 and Mar-April 2007) by Mark Eyre with Dave Renner and Vern Campbell, that seems to summarize what is known re tire pumps. The "take home lesson" appears to be that the Bridgeport Brass dual cylinder (Aeolus and perhaps Improved Aeolus) was used from 1909-1920, and the single cylinder with Ford script was used from 1920-1925 or 1927. In the final article in Mar-April 2007 the change orders and diagrams are included. The first two articles indicated different inclusive dates for the dual and Ford scripted single pumps, and indicated dates of 1926-27 for a single, non-scripted pump with a pressed steel base. The final article concludes that the non-scripted pressed steel base pump is actually for the MODEL A. There is no definitive answer regarding the dates of brass tube scripted vs the steel tube scripted pumps, the brass tube single with Bridgeport Brass and Ford on the underside of the base, or the those with and without the T-1434 on the underside of the base. Ford tools remain an area of confusion.

I'm not sure you can pump up a T tire with a single stage pump in perfect working condition.

Clay Atkins from Bridgeport,Ill. makes new leathers for them. He advertizes on Ford Barn .

I have used a modern racing bicycle pump too. takes a while but is built to handle pressures.
Cheers
Adrian

I've used a functioning Model T pump on a Model T, and it can be done.

Thanks -- how about a hose and fitting on the end?

I will give Lang's a call! Thanks!

My dad and uncles (including my mom's brothers) only had single tube pumps to work with when pumping clincher tires. I think we tend to look at some of the equipment available to our ancestors and apply our own modern perspective to them on occasion (we're in pretty sad shape physically, compared to folks 80 years ago generally speaking).

Our local chapter once visited a local club member in North Oaks, a gated community north of St. Paul, MN for those making high 6 to 7 figure salaries. He was showing us the community's little private historical society site, part of a farm owned by James J. Hill the railroad magnate. A huge butter churn (looked like it would hold about 600 gallons of milk) was located in a horse stall in the barn and had obviously been moved there from the dairy building about a block away and down a hill.

The locals theorized that the churn had been completely disassembled, moved, then reassembled in the barn. A couple of us old farm boys looked at it, shook our heads and told them that no one in their right mind back in the day would have wasted so much time. The doors to the room in the dairy were obviously just wide enough to allow passage of the churn. A couple of men and a team of horses would've moved the churn in one piece. It would have taken a LOT of work and would not be easy but it could have and would have been done. The North Oaks bunch was flabbergasted at the thought.

Pumping up a clincher with a single tube pump was just another little chore to our antecedents. Dad said they typically pumped the rear tires on the TT to 80 psi for heavy loads.

You think the farmers of 100 years ago were tough?

Man reached his physical peak in the era between 30,000 and 10,000 years ago, before the advent of farming and single crop diets. The average man was 6' tall, and as tough and strong as our top athletes. They died of bad sanitation and accidents; none of the chronic diseases we have today.

ref: "The Paleolithic Prescription," written by two doctors, a Paleontologist and an anthropologist.

Per a recent History Channel program, recent DNA evidence shows Neanderthals were absorbed by Homo Sapiens beginning about 40,000 years ago, not replaced. They were tougher yet.
They have always been shown as hunched over and stupid. The first one archeologists found, in the Neanderthal Valley, was a 70 year old man bent over with arthritis from a lifetime of chasing his dinner.

Neanderthals had better language skills than Homo Sapiens, because they had to hunt in groups, as most of the game food was larger than in Africa where the Homo Sapiens developed more as individuals.