Either there is no reserve or the reserve has been met?!

Highly doubtful there's been a reserve met that low! I'm like Robert...dreaming.

It is a no reserve auction. High bidder gets it unless the seller stops the auction for any reason.

I see three copper lines coming out of the "box" to the right front of the engine.

Correct. The NRS cars don't have a crankcase pan per se, the oil just slings out the bottom of the engine as it runs. There is a belly pan that keeps large dirt clods out of the lower end, and directs all the dripping oil towards the rear of the car when parked. Messy but fun.

Ah, a total loss system then. Thanks!!

Looks like the right rear wheel is about to come off or there is a problem with the axle. Note there are no brake shoe bolts.

Back upholstery has been detached (tacks and trim removed) and looks like it is just propped up against the seat back. Cushions have a 1920s re-cover - wonder if the original upholstery is underneath?

Model N, R, S motors do have a crankcase. The crank and rods are not exposed, slinging oil to the ground.

The motors are open valve. Also, the cars originally did not have modern seals like we have now.

The transmission is uncovered and out in the open.

R and S used a McCord mechanical oiler driven from the front of the camshaft, with two lines to the engine, one to supply the front main and one to the center. As with Model N, the third oil line went to the rear bearing behind the transmission. The crankcase is shallow, with rod dips similar (but smaller) to a Model T pan.

Unlike a total loss system, NRS have a "drip loss system." Ideally you want to adjust the oiler to provide just a little more oil to the crankcase than is being lost. Each evening or at the end of a run you open a petcock in the bottom of the pan that has a standoff tube and drain excess oil.

Erik, not only no brake shoes, no brake rods. However, it looks like an original R body. With about 2500 made, the Model R runabout is one of the rarer NRS models.

The oiler also looks newer, and maybe a little different than the original all brass oiler. Also, it looks like the oiler pulley doesn't line up with the camshaft pulley, leading me to suspect it was never functional on this car.

This looks like a good project, and might not require much to have it on the road. NRS are easy to work on, and some parts are available. They are very simple to drive and maintain, responsive and one of the faster pre 1909 cars.

My dad's 1910 IHC Model F roadster (four cylinder motor, pneumatic tires) has a similar system as the Ford R and S. It has a Hill precision mechanical oiler with four lines to the engine and one line to clutch bearing. Each line has its own adjustment. The crankcase has one petcock for each cylinder so the excess can be drained off.

Minor correction - I'm 99% sure that is the 1907 McCord Mechanical oiler that would have come on the Model R Runabouts and also came on the Model S Runabouts when they started shipping them in Aug 1907. Below is a photo of the 1907 McCord oiler on our Model S Runabout. Note our oil cap is NOT correct and one of the out put lines is missing on our car. I think the oiler on the R has been painted. 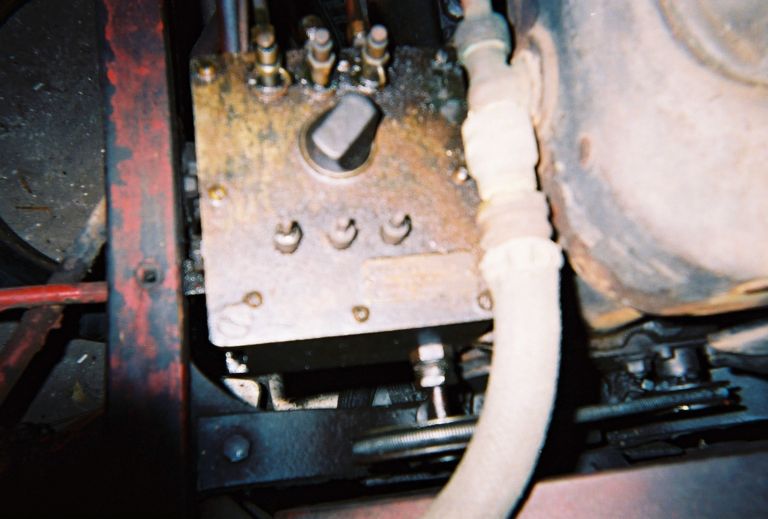 From the photos I think the car was being restored and the restoration was stopped for some reason. Note the ID patent plate was put on the dash instead of the heel board for the front seat. The bolts that hold the dash/firewall to the brackets are missing. The muffler is missing. But many of the parts appear to have been cleaned and painted (we don't know what the inside parts look like).

As pointed out the right rear wheel is too far from the backing plate. It could be as simple as it needs to be pushed back onto the axle and the pin put in to hold the wheel in the proper place. Or as complex as the axle is broken and the pin is holding the wheel to the axle. Or perhaps something else.

The coil box is not one of the ones listed for the Model R. But that could be corrected.

Overall I think it has some real potential to make a nice driving car. -- but a bidder would want to have photos of the transmission - that is a known weak area of the car. New transmission frames are available from Lang's but they are costly (at least on my budget). Other parts would also need to be looked at.

The R doesn't really doesn't mean that it's a "running board" model, does it? I always thought it was just the next letter in line (assuming the models O,P and Q were considered but never reached production), which always satisfied me more about the S and T following.

Tim,
Yes, the "R" is following the alphabet. Other letter cars didn't make it to production, but were mentioned in Ford documents and advertising, including Models G, H and W. A two cylinder delivery car was labeled D or E too (memory).

Thanks Rob, that little tidbit stood out to me in the eBay ad and just seemed off.

I can't believe the seller hasn't tried to even run it since he's owned it......I haven't got that much self control

I know absolutely nothing about the pre T's, is that rear end correct or is it a 15-25 T?

M.G., yes, models B, K, N,R and S all had a more substantial differential housing than the early T. The Model B was reported to be the first production car to use the U joint three point enclosed shaft rearend.
Rob

Thank you, it's interesting how some of the very early designs came back in later years. MG

I do so wish I could afford to bid on this one. The price is climbing, but at just over 15K still reasonable. I will watch with curiosity to see how high it does go.
Clearly, there are a number of things that will have to be corrected before it can be driven much or toured.
A few other things also caught my eye. I am by no means an expert on the NRS Fords and their accessories. However, the side and tail lamps look an awful lot like '13/'14 T side and tail lamps.
Can anybody set me straight about that?
I do wish I could try for this one (or any NRS project. I would love to have one.
Drive carefully, and enjoy, W2

Wayne, the lamps do look suspect. This is a Ford Motor Co. drawing of the Model R. Of the Model R I've seen (not many), I've never seen the brass rail shown on this drawing: 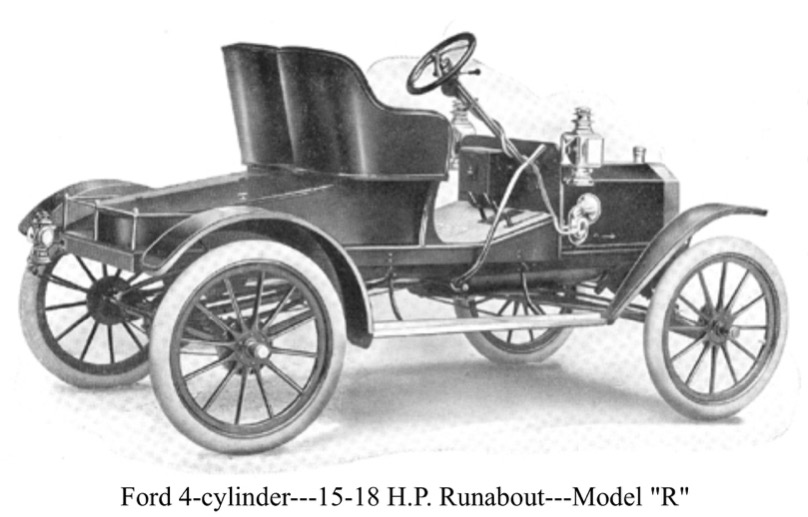 I too, will just have to keep dreaming.

It will look good sitting next to my model F.

I looked at your profile

Robert, would you consider loaning it to the museum for a time? Milt is taking his two cars home soon and we need something to replace them with.

I am glad it found a new home. Hopefully we will see more pictures of it here or on the Early Ford Registry. The photos on eBay were nice to see. I looked there several times. Some of us can only dream. The F is wonderful.
Rich

Thanks guys, I will try to post more pictures after I pick it up. Jerry, I might consider that sometime in the future.

Congratulations on your new Model R Runabout. Please let us know if you find a body number when you lift up the front seat cushions and look down at the front of the front seat frame.

Note, from memory -- not as good as it once was -- recommend you support the steering column when you transport the R.

From memory I believe there have been some reports of some NRS&SR cars having the dash and or steering column damaged when they have transported their cars and they did not support the steering column.

If I remembered that correctly (if someone knows for sure please verify it or correct me) I would GUESS that the column vibrates so much that it can sometimes damage the dash etc. If a person is holding the wheel they serve as a damping device, but when it is free to vibrate -- it evidently sometimes may cause damage.

Again -- disclaimer -- I'm going from memory. And Google wasn't much help to me this time on finding a reference for that one.

Good advice, thanks Hap. Btw, Ghosts wheels just got back from Stuzmans and look great.

Craig,
You have to remember that during an auction, don't wave to a friend across the room, don't scratch you nose, nor rub your head--you might be bidding!!

I'm always glad to hear about any updates on progress on Ghost. Stutzmans does great work!

Again congratulations on your new Ford!