Stumbled across this neat photo today captioned:
British artillery ammunition being moved forward on a locomotive improvised from a car. Flanders August 1917. 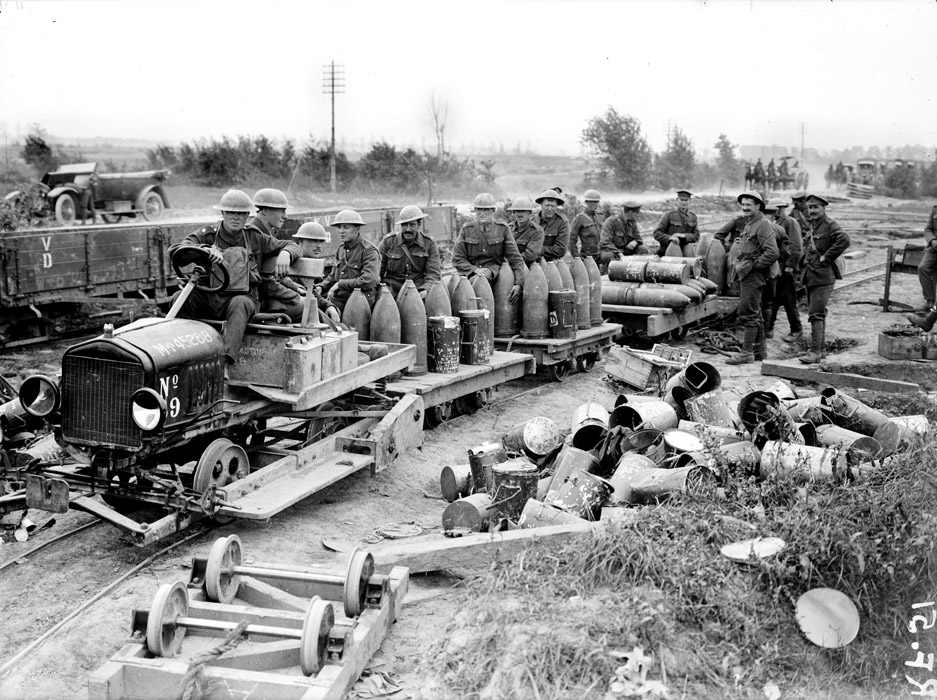 Cool as heck photo. Thanks

Look how skinny those rails are. You can see the wear marks on the wheels

That driver is not going to run out of water is he.

I love the headlight lenses, kind of give it a face. I always thought they were a much later accessory.

The T is a 'Crewe Tractor' specially adapted for the role - running on 600mm gauge rails. It had a central jack so it could be turned round very quickly.
Crewe was and is one of the main UK railway engineering centres, and it is less than 40 miles from Trafford Park, the Ford factory site.
The idea came via the daughter of the Crewe chief mechanical engineer's daughter who had been speaking to army officers about logistics problems on the Western Front.
The wheelbase was 4' 5". About 135 were built.
They could pull a 15 ton train at 15 mph

The headlamp lenses were one of the first things I noticed also. I would be curious about who says the picture was 1917 and why. It may well be '17, or not.
Headlamp lenses similar to those were on Ts from the Ford factory for about a year (late'20 and early '21). However, they were also available as an after-market accessory somewhat earlier (by 1915). I do not know when they would have first been readily available in Europe.
The radiator style means the picture couldn't have been taken much before 1917, but it could be a bit later. The men all look tired. That didn't take very long after the war started however.
Great photo regardless!
So, Howard D, are you thinking of lenses like that for your Maxwell? I think that would look good!
Drive carefully, and enjoy, W2

Richard, it is more likely those tins contain petrol rather than water

Wayne, actually these would be my second choice if I didn't already have a pair of Warner Lenz glasses that I acquired as a teenager and held on to all these years hoping someday I'd have a car they would fit and 10 years ago my uncle said I could have his Maxwell as he'd never get around to restoring it. I think it was worth the wait! 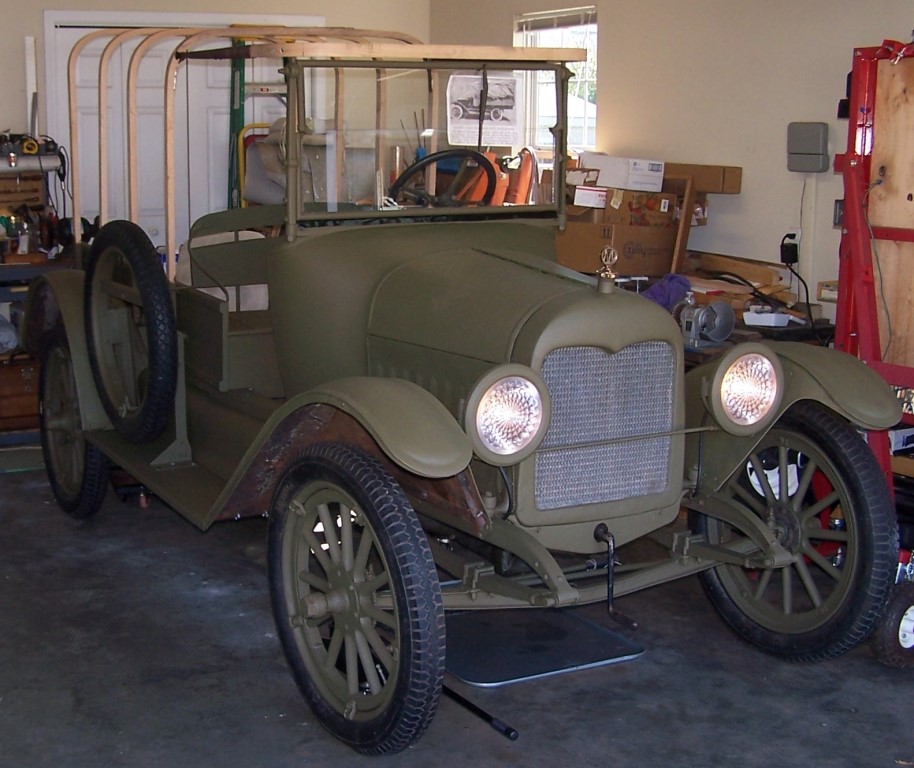 Those "bubble lenses" do look good on there. I think they are also an appropriate vintage for your Maxwell!
Maxwell is looking good! Hmm. Have you given it a name?

Howard great pic, so much to take in!.. I love the chariots of horses racing toward the scene, but I'm also fascinated about the man in the background underneath the hood of the behemoth of a car he is trying to fix. Anyone have any idea of the make of this car?

Never thought of that and I should have as I used to have 1929 AA flatbed named Henry. Guess Max would work or Jonathan after Mr. Maxwell or maybe just wait to see what characteristics it exhibits on the road before deciding what names to call it!

Howard, what a awesome car. I like it. Tim

Those headlight lenses were probably what the military called 'blackout' lenses. The top portion was black so the light shined down and was less visible from the air.

John N.
That large car is a Rolls Royce Silver Ghost.
If you enlarge the photo , you can picture the radiator as a Silver Ghost shape radiator but the main indication is the rear spring shape. If you look between the running board box and the rear wheel you will notice that there is no taper of the spring leaves because the rear springs on a ghost and the new Phantom's are chassis mounted cantilever design so the thin part of the spring is mounted on top of the rear axle(at the rear) and under the driver (at the front).
But as my kids often say "You are not always right you know".......N.

Neil , I think that the length of the hood (bonnet)in proportion to the size of the man's body is too short for Rolls Royce ,the radiator is in proportion rather of a Wolseley which belonged to Vickers at the time and was used at the Front with Crosley ,Vauxhall and RR , the latter more often seen in armour .

Thanks Tim. Wayne my wife just asked what I was writing and I told her about naming Maxwell. Her response was who gave to you? I went Duh, so I guess my Maxwell is now Uncle Charlie.

I agree more likely a Wolseley, but I wouldn't be surprised if it was an R-R. They were always under the bonnet of them

The big touring car on the left looks interesting too. Can anybody ID it?

Chris - do you know if any of the Crewe conversions remain and if so, where they're located?

Commonwealth Forces went to the trench helmet in 1916. War ended in 1918. Pretty easy bracket to date the vehicle. Ford offered that style lens in '21 I think - they didn't last long (have a really nice set that will go in some future project). But that modification to a lens didn't originate with Ford. You'll see any number of "blackout" configurations to headlights and cowl lights on military vehicles in period photographs.

The tins contained neither petrol nor water. They contained charges (powder bags). Projectile would be loaded in the gun and then the charges would be loaded behind the projectile (number of bags would depend on range of target they were firing), the breech closed and the gun fired.

Ron, the three 2 gallon tins beside the driver contain petrol, the cylinders (some empty in a pile on the right, and some loaded on the flat cars) are the powder tins.

Ron: Maybe that picture was taken at Fort Devens? Dan

Ah, thought everyone was talking about the big pile of cans next to the tracks.

Ron: I know, My Dad was from Shirley. Still have family there. Dan

Was curious if any Crewe survived and Google turned up a replica being constructed, also check out this link, specifically chapter 7 on the Crewe. I wondered in the photo why the spindles were still attached.
Howard Dennis

The big car is definitely English. The hood is up and a guy is working on it.

Oops, guess I should have done a forum search before I posted that last photo, sorry for the repeat but this does have better photo than mine.