A friend of mine sent me this photo of what appears to be a roadster with slogans painted on the sides. Any other examples of this style, or examples of slogans that might be found on a T? 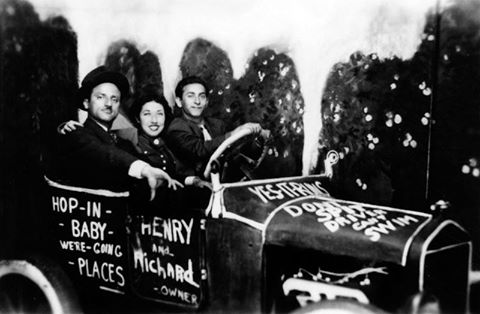 That would be from the 30's through the 40's when a T was kind of embarrassing to drive until the T got more accepted as an antique during the 50's..

Back in the mid '60's, my now deceased buddy and I found the remains of a '26-'27 roadster body buried in the bank of a creek. Just the back was sticking out and you could still read "CAUTION! HAIR BRAKES!" There were some other writing on it, but couldn't make it out. Dave

I liked the sixties better where the slogans were painted directly on Goldie Hawn.

Dad took this in Yellowstone Park. The plate looks to be Utah 1934. The Bus is a White Model 15-45. It could even have been mine. 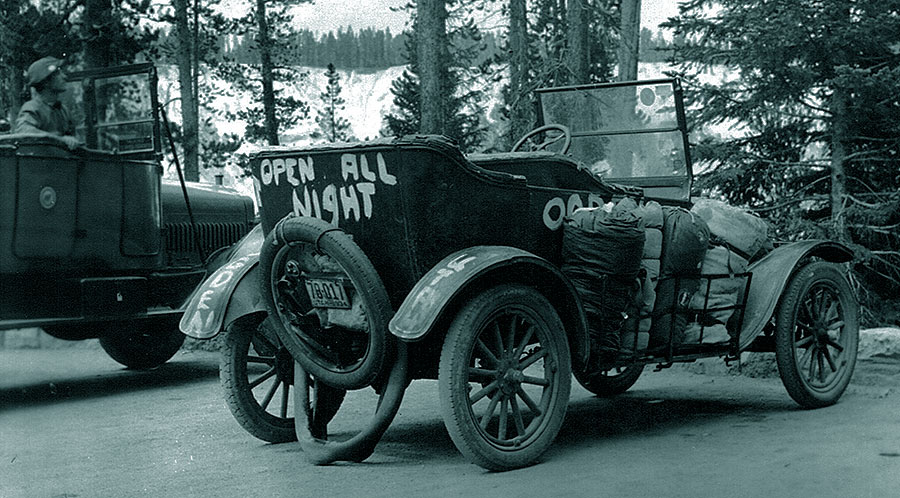 We just don't do that anymore. I'd guess the beginnings of the idea went as far back as 1849, "Californny or Bust" and later, "Pike's Peak or Bust".

Cute graffiti on cars (mostly Model T's) was certainly a roaring 20's thing, along with raccoon coats and whips on windshields with raccoon tails attached (wonder what they had against raccoons ?!?).

Sobered by the Depression, legends were sometimes put on plaques added to the license plate. One I remember seeing on a Model A was "Peaches, here's your can !"

Into the 60's, it was a common prank to paint "just married" and all manner of pertinent and impertinent sayings on the honeymoon "getaway car" while the couple was otherwise distracted. I haven't seen that in a long time.

Maybe all the energy that used to go into this is being expended nowadays on the railroad rolling stock by gangbangers and druggies with rattle-cans ?

I think the GI. Is looking for an AWOL.

I think the park guy is looking for a poacher shining elk. Why would he save the inner tube? Great right rear tire. Should put the baldy apart on the left rear then they woul match.

Don't laugh. It's paid for.

My Model A had "girls wanted - inquire at drivers side" under its metallic green paint. It also had the remnants of a horn sticking up through the rear seat pan. The car was retired in the mid fifties according to the guy I bought it from.

In the sixties I had a model a roadster that had the following painted on the rumble seat lid. "All you girls that smoke throw your butts in here"

My cutoff came down through the family with "Look what the depresion done to me." (spelling mistake included)