Couple of weeks ago I was talking to my dentist and he suggested a new way (for me anyway) to polish brass. I've tried the "by hand" method and had mixed results. He suggested I get some buffing wheels and try that. The item I bought was on eBay, item # 2222239066818 and cost $16.43. I use them with my cordless drill and seems to work better than anything else I've tried. It is pretty easy to remove the lights from the fork so that's what I did, using old fashion Brasso. I would use a cuetip to apply the Brasso. The buffing kit comes with 4 fixtures. The vendor is MATCC Buffing Pad 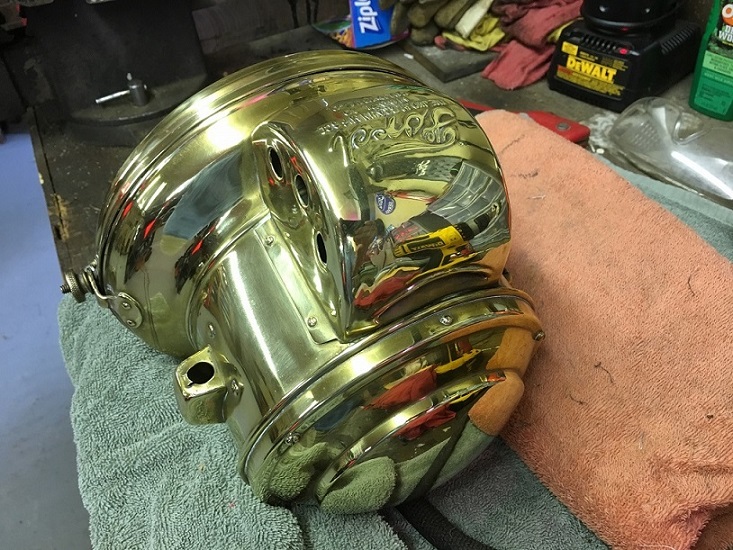 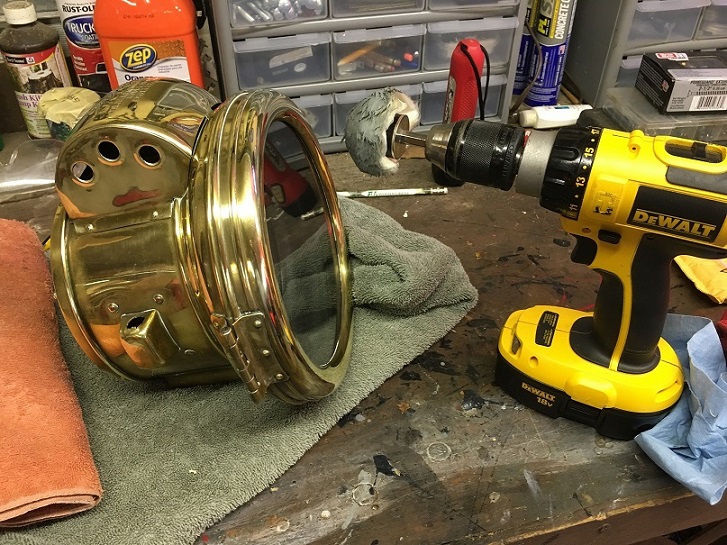 Feel free to come on over and practice on mine. They look good but I'm not planning to polish brass until spring. I'm thinking about trying one of the foam wheel cleaners on a drill.

Looks good. I need one of those because I get tired of polishing. Brass sure is pretty but everything painted black sure is easier.

This would be a good place to ask, what do you fellers like to use to polish brass ? (I haven't been able to locate any Brasso)

Keep it up, and you won't have any script left!

Rich, go lightly (if not at all) with Brasso, as it is harsh and it scratches. I use Weno,and it is much softer, but not like buffer's kit stuff, which usually is available with several grades.

Google How to polish brass and see what comes up. Good Luck,

There are several good polishes, but the current Brasso isn't one of them. It's not the same stuff I used in the army fifty years ago, and the change is definitely not an improvement. Prism and Cape Cod are good, and a Google search of previous discussions should find some others.

I use California Custom Purple and then seal it with Blue Magic.

I have Noxon, Brasso, Wenol and several others. If anything is really bad I use Brite Boy. Still I prefer the California Custom Purple.

I'm glad to see someone else has found Brite Boy, I use it first because it cleans the brass very easy with one application then finish with Mothers Billet or Prism is also a good one that gives a deep lustre shine. Blue Magic is what the Brassworks guys use on their radiators,

Get rid of the brasso and Larry is right about buffing off - wearing away details. Be careful and Gentle.

Well, this light was done with Prism. I also have Blue Magic and Noxon as well as Brasso. Thanks for your suggestions. 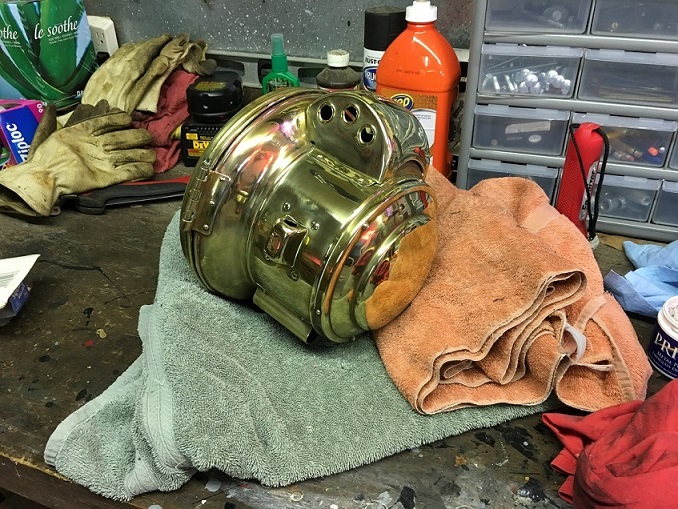 John, so do you like the Prism better than the Blue Magic or is it just the one closer to your reach? I've just started using some Prism after reading some posts here some time ago. Us brass polishers always seem to be looking for something better then end up with a shelf full bottles with cool names.
I have never found one I like better than the Brite Boy for the dirty brass though but the shine is just not as good even though it is the easiest.
Nice looking light. Is that hand cleaner in the back for after polishing? The worst part of polishing for me is sweating hands with those darn gloves on.

I did this with Wenol and some rags.

Haven't done the Blue Magic yet. I'll do the radiator next and see how that works.

I have now tried, Brasso, Prism, Noxon and Blue Magic. They all look about the same to me. The problem with the Blue Magic is that it gets into creases and tight spots and is hard to get out and shows up because it's blue. Personally I still like Brasso no more than I use it. By the way, I was in Home Depot this afternoon and Brasso is about 85 cents.

If the cleaner you are using has ammonia in it, and most do, you will eventual get embrittlement that will lead to cracking.

So Ed is that a good enough reason Not to Polish the Brass and go for the Original look? I also think most all do as well.
How serious of a risk is this? I know I've been polishing for many years now.

RE: Brasso, ammonia and embrittlement

Many people think that Brasso is very bad for brass because it contains ammonia. However, I found out that many folks in the musical instrument business - hobbyist and professionals alike - have no problem with it. (Folks who clean brass clock works also seem to have no problem with using ammonia.) The concentration of ammonia is small and it is used for only a short period of time.

I found out much of the information regarding ammonia and brass fracturing goes back to when the British made the mistake of storing ammunition in horse stables. Long term exposure to the ammonia in the horse urine caused the brass cartridge cases to crack, especially where they were crimped on the bullet. Long term exposure to high concentrations of ammonia can cause season cracking, especially if the brass has already been stressed.

I've come to the conclusion that this is not a concern when using low concentrations of ammonia for short periods of time, especially when I read the arguments for and against on the internet. Also, many of the folks who are adamantly against using Brasso will be surprised if they ever research the ingredients of their favorite brass polish which actually also may include ammonia. 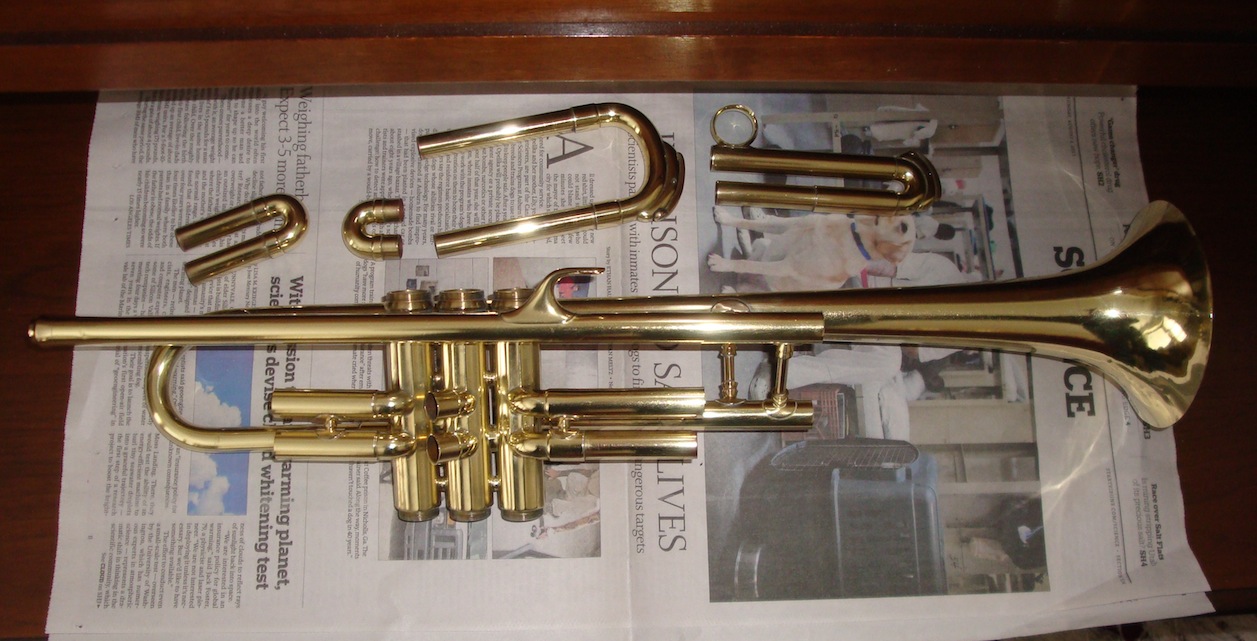 John Mays & Gene C., I've used both Prism and Blue Magic and frankly I never noticed a difference in either one. They both worked well. Blue Magic is more readily available is the thing. Just my thought. And I can't believe there's that much ammonia in it to do that much harm with what time we have left on earth. Unless you're maybe only in your teens and polish every month.

Thanks Royce. I expect that you polished those very same headlights a time or two before the car decided to bunk with Otis in our garage. They're getting along just fine.

I used Wenol and some socks on these headlights. 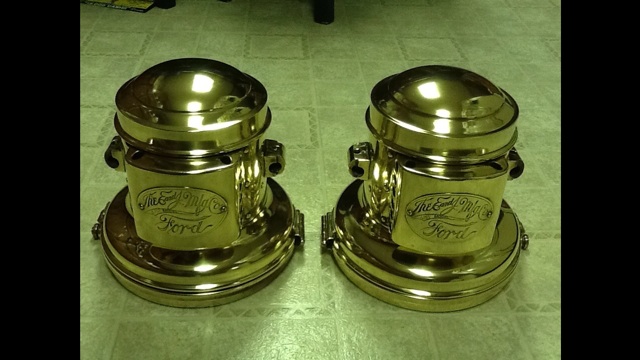