I would like to point out that the early oil can description in the MTFCI judging guidelines is incorrect, and should be changed. For positive proof, please refer to Mike Walkers excellent article on oil cans published several years ago in the Vintage Ford. I also did an article years ago on early tools which shows the proper oil can.
I believe they should get the information corrected before the next guidelines goes to print.

I had a couple of links with my eggs this morning

Did you? that's nice. I meant links to where I an see which cans are the proper ones for my car. Pictures would be helpful of the oil can, not your sausage.

So, you want pictures of his can?

Sorry Larry S. Seriously. Thank you for pointing this out.

I got an email from Dan Treace, and he is aware of the problem. Whether they will do anything about it is another question! The problem is so obvious, it's amazing to me they never corrected the problem! The correct oil can is pictured in the early teens Ford parts books. There was a photo of one posted on this site a few weeks ago by a fellow that found one in an antique store.

Just chew on that phrase and really think it through ....

I am going to post pictures of 6 early oil cans, none of them the same. The first 3 are double Ford marked. I believe the double Ford are the earliest. They were made by "Maple City" and "Noera". The Ford script on the Maple City appears cruder than on the Noera. There are two different Norea tops, one "flat" and one "stepped".

When I try to post 4 photos, to come up as Boxes with ? mark. So will post two at a time.

The 3 double script and the Maple City top, which is on the left in the photo of 3: 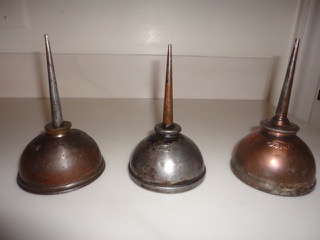 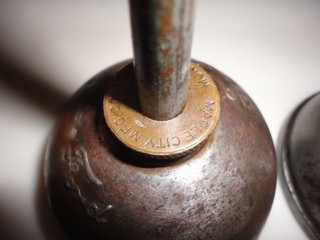 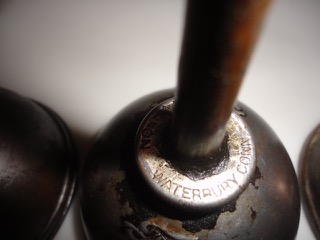 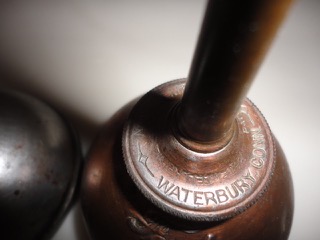 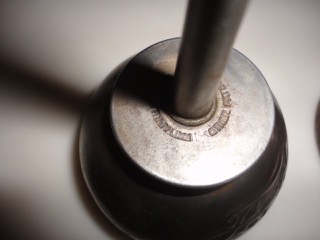 The photo three did' make it! Here it is 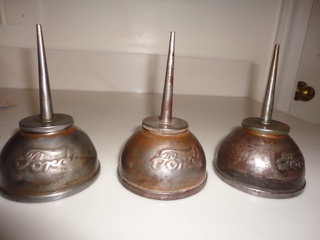 Thanks for the pictures, Charles. Attaching multiple pictures to a post does work, even if some of them don't show up in the preview. Don't worry, all of them will show up in the final post.

Finally the photo of the last two, with the different patent dates. It could be the one became damaged on the die. I have seen several with both dates, so it is not unique. 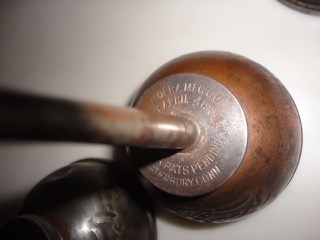 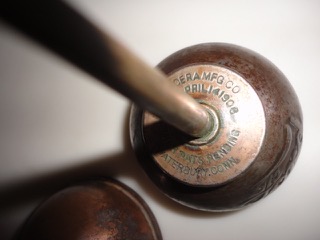 I was approached by an old man one day while at work. I had driven
the TT that day, and he had seen it, gone home and returned with one
of these cans. He said I needed it to "properly" oil my truck. Thank
goodness, as improper oiling had not done much damage up to that
point and I was able to now do it right.

Nice gesture on his part!

Thanks for posting those. What did the later cars come with if they did come with oil cans?

I have at least 10, probably 11, more that are all different. They are all single stamped Ford and do not have maker's markings on the tops. The tops are either bayonet or they screw on differently than these. I have no idea of the sequencing of the different types, some may be A and even V8. I will check my Model A references and see if they know which are Model A.

Thanks for coming to the rescue Charles!

According to the Model A Judging Guidelines, Ford supplied oil cans with the Model A until May of 1928 (the A was introduced Dec 2, 1927) so only the first 5 months of production was supplied with an oil can. David Adair, in his "Guide to Tools for the Model A", states" ...oil can is same as the late Model T. Model T cans may have a larger script."
However, given the various style cans I have seen with small script I would think that both large and small script cans must have been supplied with the Model T. Approx. 165,000 Model A's were produced through May 1928. Of course they probably sold oil cans through dealers.

Getting back to the original intent of Larry's post. How can we get the guidelines corrected. And at the same time correct the color of the early jack error?

I went through the oil cans I have yesterday and have 14 more different cans. So that makes 20 varieties that I have accumulated. If folks are interested I can photo them and post the photos.

In the days when patent dates were stamped on products, it was common for more than one date to be listed. That's not an error.

Charles, You asked how to get the Judging Guidelines corrected. Corrections, suggestions and questions about the Judging Guidelines should be sent to the Chief Judge, who is also the Editor for the Guidelines. At the present that person is Russ Furstnow and his contact information is given in the MTFCI magazine, Model T Times and by email to: chiefjudge@modelt.org

Back during the '70's replica oil cans were sold by the early Ford hobby supply companies. I wonder if a lot of the cans with copper wash left on them are replicas? Just a question not a statement of fact.

Is this a Faux Ford Oil Can? No script on the top! 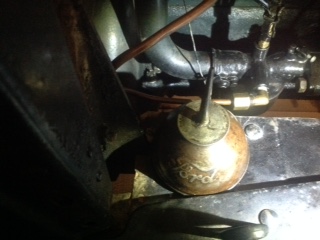 Of the 20 different style cans I have, only the 6 styles pictured above have markings on the top.

Charles,
So is my can legit for a period can or is it a 70's replica?

I am not sure what the replicas looked like. Maybe some one else can help.

I don't believe I have any catalogs that far back that would show them.