Does Anyone have any photos of a period early mechanical tach on a model T?

I would love to see the drive end of a mechanical Tach on a Model T myself!!

I have a WWI aircraft tachometer found on Pre-War.com. Was planning to run it off the magneto drive, as it is 2/1 and wants camshaft speed. I too would like to see how folks have done this on the Model T.

I saw a picture somewhere of an Eismann mag drive with a tach drive coming off of the cover for the mag gear. I would definitely like to see how it is done.

On my 16 roadster' there is a hole in the front timing gear cover that is right over the cam gear. That is the only thing that I can think of that would use that hole. Threaded 3/8 fine.

Just recently I saw a post/ebay listing of a speedster with a matching Corbin speedo and tachometer. All I saw was the interior of the car, no drive mechanism.

I have been under the opinion that this unit was for driving a tachometer. There are 23 teeth on the large dual gear that runs off the generator's 16 tooth gear and 30 teeth on the small gear of the dual gear which drives the 34 tooth final drive gear that spins the output shaft. It so happens the final drive gear has a square socket hole that a 1/4 inch socket extension fits just right in. Can someone tell what the RPM of the final drive is by using the figures I supplied? 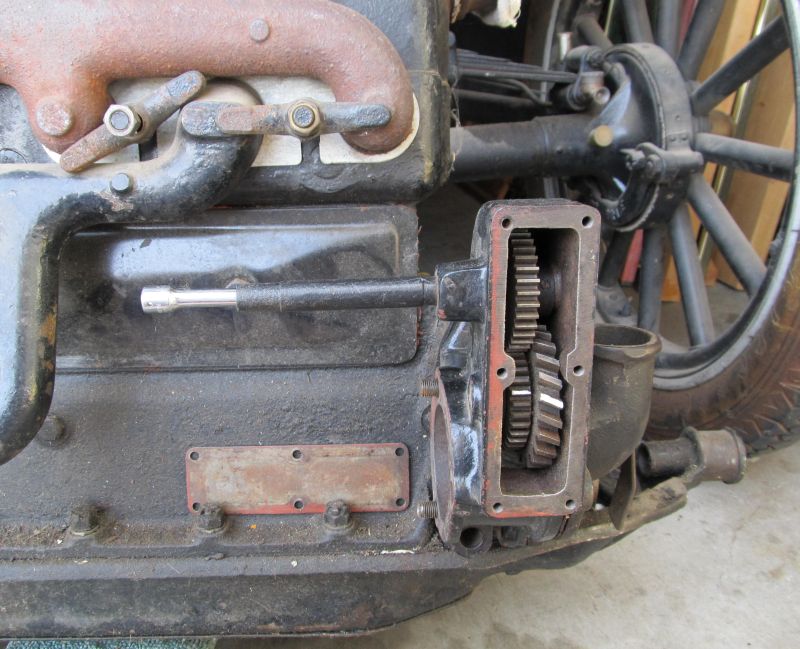 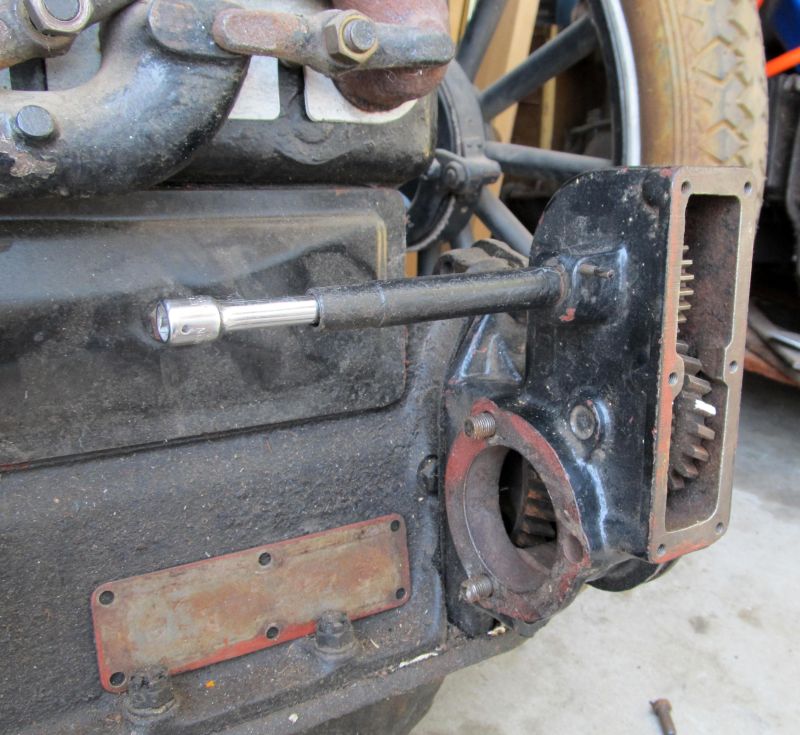 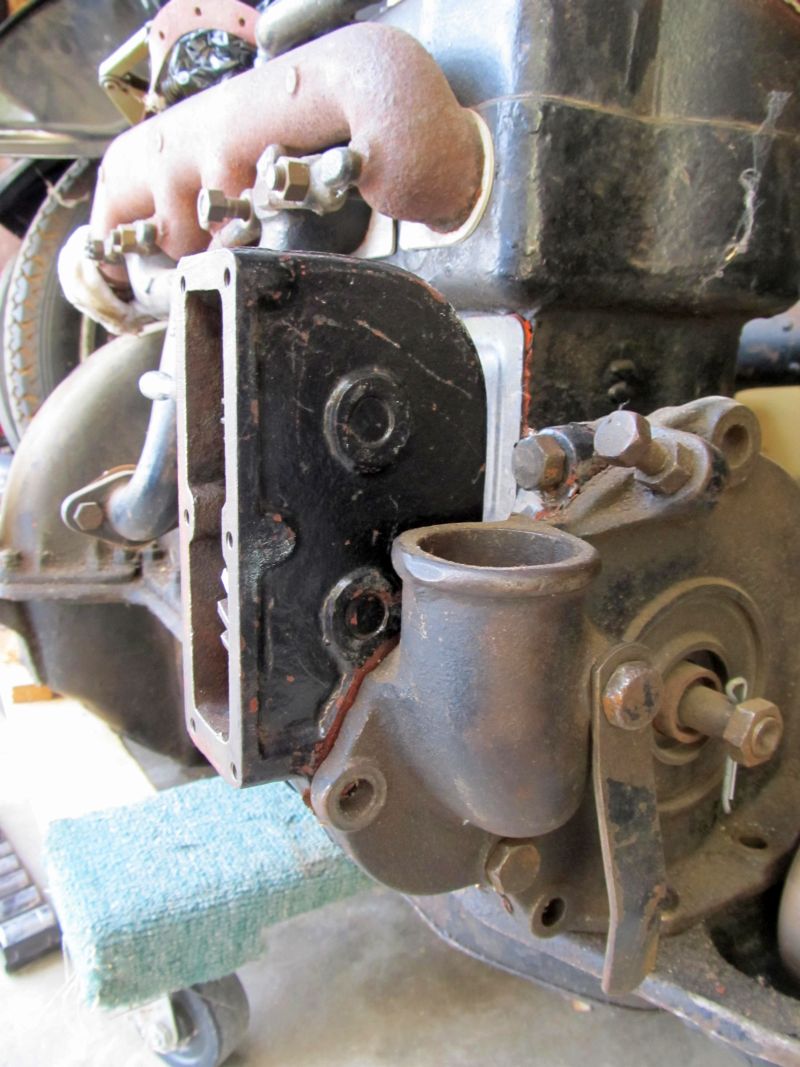 Alex-
I have never seen a vintage mechanical tach on a Model T.

There are a couple of antique mechanical tachometers on T-bay:

Of course you need to have a drive from somewhere and know the gearing.

If you have a distributor, you could hook up an electronic tachometer that has a vintage look, like this:

I guess some of the speedster guys like 'em. Available in lots of color combinations and style. Do you have an antique speedometer you would like it to match?

Jay, I'm thinking your drive is for an oil pump.

Stewart made a tachometer that is a mate to the Stewart 100(?) speedometer. Actually uses the same internal frame but no odometer wheels and the drum is graduated in RPM.

Imagine this speedometer http://www.ebay.com/itm/Antique-ORIGINAL-MODEL-T-FORD-SPEEDOMETER-STEWART-0-75mp h-mint-condition-/132025060315?hash=item1ebd4e8bdb%3Ag%3AOOAAAOSwo4pYRXcS&vxp=mt r&nma=true&si=U2ni0bCrHe8CjUxaqASYmZPqMS0%253D&orig_cvip=true&rt=nc&_trksid=p204 7675.l2557 but with no odometer openings in the face and "RPM" instead of "Miles per Hour" below the pointer.

I believe I disagree about the final output RPM given 1000 rpm engine speed.

I know it was posted along time ago by Andy Clarey but here's a close up of the early Stewart 3000 K tachometer on #4. orig. drive was missing so we made one that mounts where the generator normally goes and drives off the cam gear. Unfortunately it's still laying on my work bench waiting to be put into action. 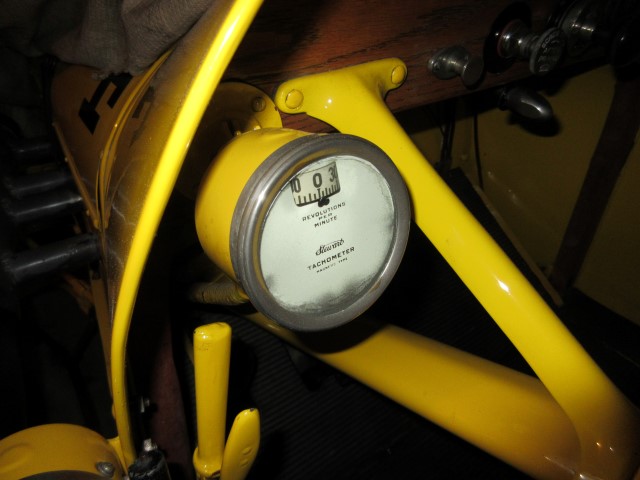 I have always admired Ed's tach on #4

I always wanted a tach for my '12 Touring; found a NOS Stewart Warner unit, with a black steel case, on eBay in 2013.I shoehorned the tach into the brass case of a Model 26 Speedometer to make a matched pair. I drive it, with a cable thru a 2:1 angle drive from a pulley mounted on the inner surface of my fan belt. This pulley is the same 3" diameter as my pulley on the front of the crank.(I was obliged to go to a serpentine belt and pulleys, to handle the 65 amp Geo Metro alternator.)All has been working to my satisfaction for the past 4 years. See a few photos of interest. Tom 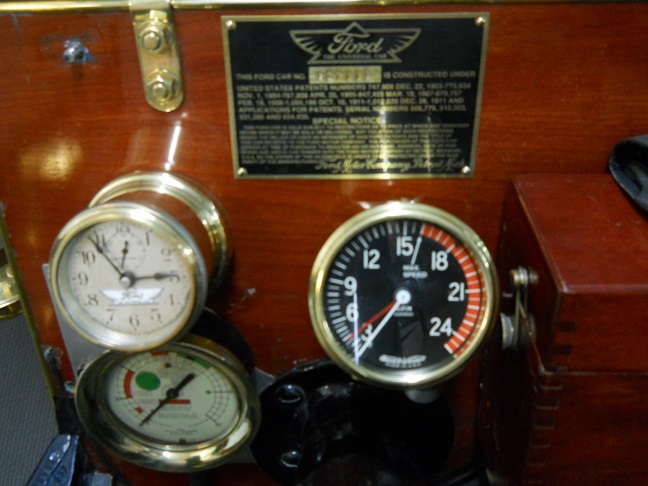 Trying with difficulty to add a couple of photos to my previous post.Tom 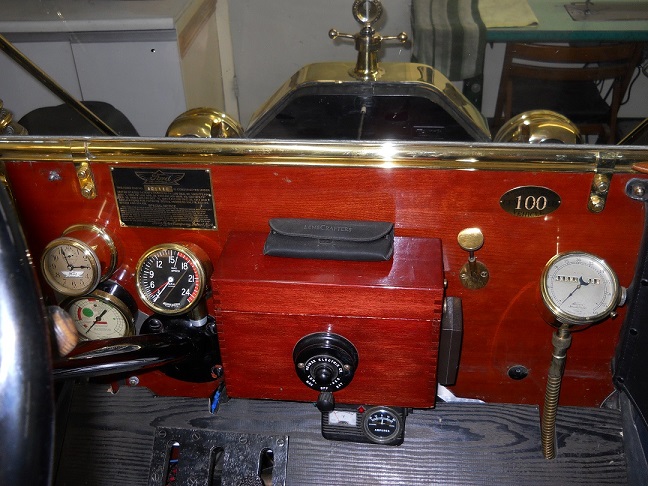 Wow 6 gauges and a garage door transmitter! What is the brown knob under the steering wheel? There's so much to look at here is there ever enough time to look at the road?

I guess the ammeter on my '27 isn't so much of a distraction after all! There is one more gauge you must add: on my 1913 I used to have an oil level float with a bright red ball on top. The little ball rose and fell just inside the firewall. You could watch it fall while driving but had to shut off the engine and wait for an accurate measurement. Mine was a period accessory, but a repo APCO one was made a few years ago.