Today I for the first time adjusted the 4th rod on a 3 dip pan. I have to say the experience was pretty painless, but i did spend about 2 hours doing it. I have noticed a lot of newer people here and decided to share my experience so they could see what was involved.

To start off, drain the oil. I saw an idea on here some time ago and decided to expand on it. I feel it made the job feel easier as the worry of dropping something was lessened. That is the one thing I have read on here since getting into T's over ten years ago---DON'T DROP ANYTHING in the pan! 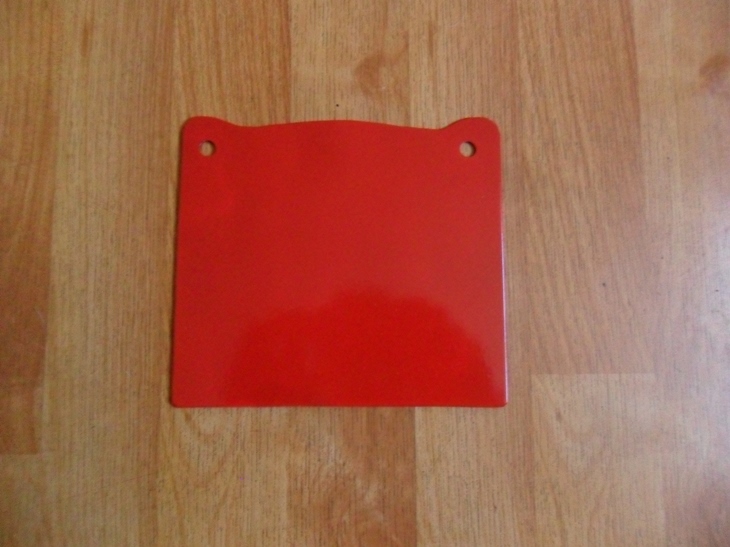 I then turned the engine so the rod was to the left side (drivers side) and about 1/3 the way down. Then the plate can be slipped in. You may have to ever so slightly bump the engine to get enough clearance to get the plate in. Then just bolt it in the corner holes with a couple of 5/16 bolts and nuts (8mm for you non USA folks, ha-ha). 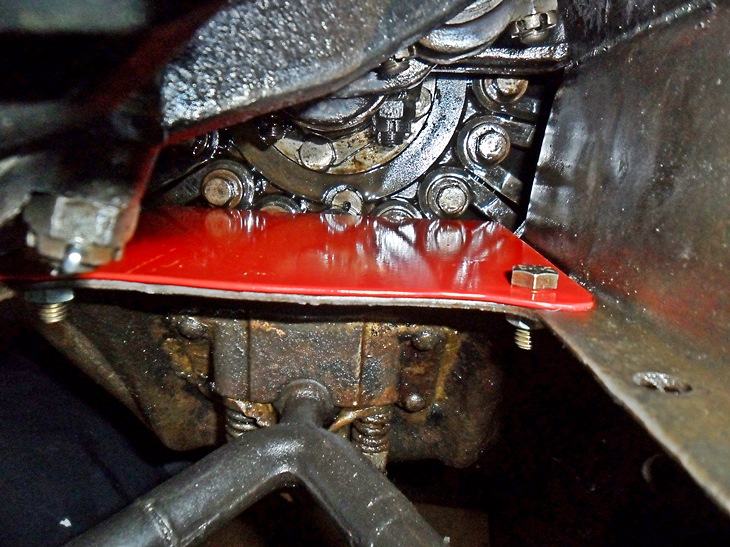 Next stuff a few rags to fill the rest of the voids, in this case I used 4. and MAKE SURE YOU COUNT THEM---and then write it down some where. You want to make sure you pull the same number back out. 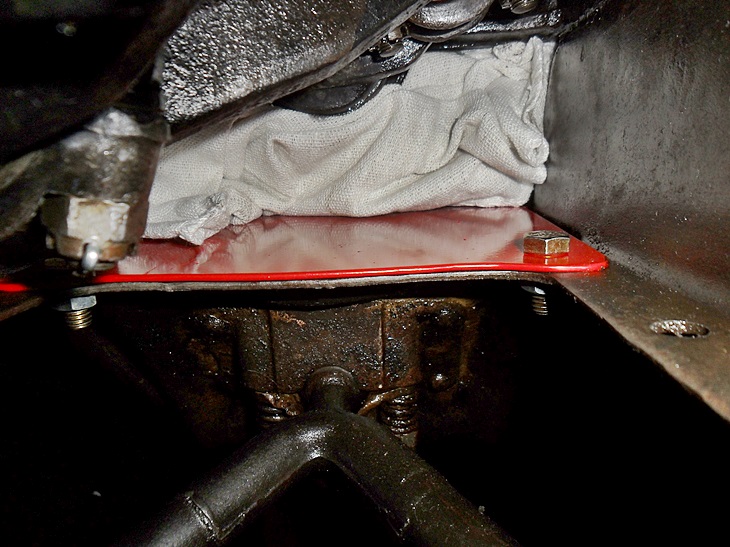 As far as getting the nuts off the rod, there are a couple options. If you get the crakshaft in the right position, you may be able to get a 5/8" socket and flex head extended handle ratchet up in there as I did. 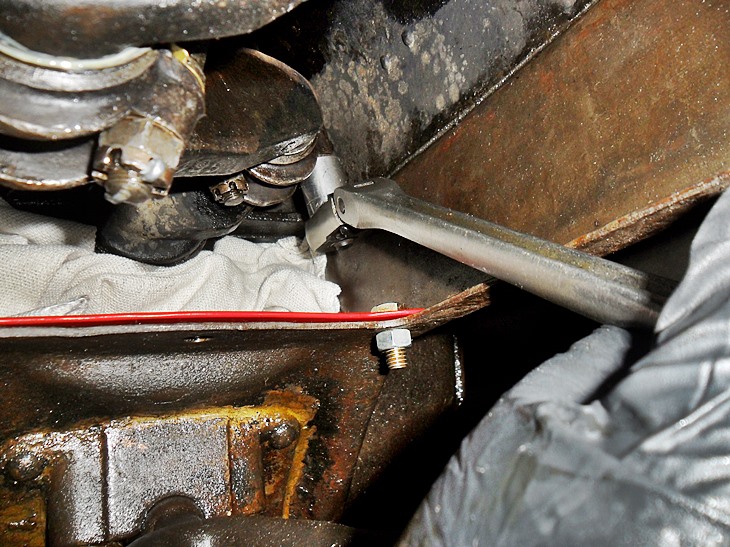 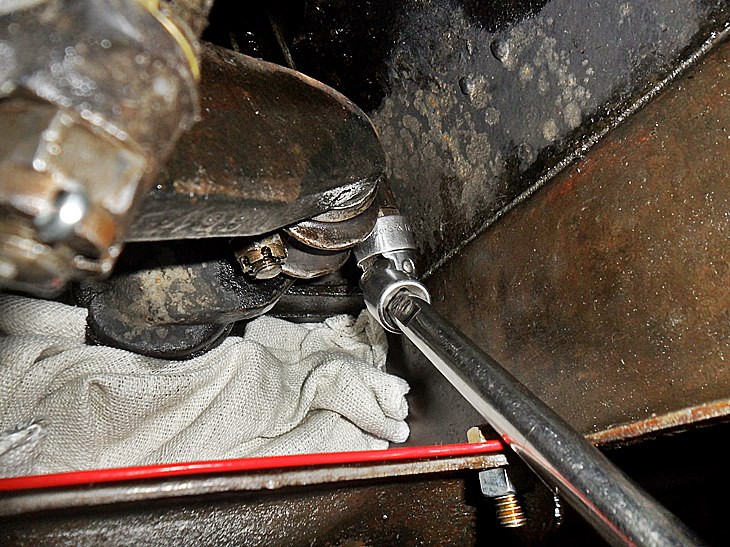 Past all this, adjust your rod as usual--some light grease on the the shims to keep them in place is very helpful---just don't us a lot. Also I found body position under the vehicle to be a factor. You want to have your head pointed towards the front of the car. There is also a lot of putting the cap and nuts on by feel. I could not see much with my hand and arm in the way so unless your built like a stick, lay on the ground and take a few deep breathes and carefully just feel around while trying to hold the cap on and start the nuts. Once started, I could run them up by hand and then snug them and then torque them. My torque wrench also has a flex head on it so it makes it easier. 25-30 lbs and then advanced as needed to get to a cotter pin hole. Others have used self locking rod bolt nuts, I just stuck with Henry's design.

All in all, it took me two hours to adjust #4 to get it tightened up. If you think you can do this without dropping something, guess again. Build the plate and use the rags to avoid possible fishing expeditions or future disaster.

Have fun, be safe.

My problem was the dippers I had installed on the rods - they're made of soft steel that tends to stick in the rod bolt threads, making it very hard to remove them. On the first three rods I just used a punch and a hammer to push up the rod bolts until the dippers and the rod caps were loose - but back at the fourth rod it wasn't possible to punch up the rod bolts, wasn't even space enough for pliers, so I needed to make a special pushing tool from some flat iron and some bolts to get the dipper and the cap off rod #4..

Great tutorial and pics, thanks!

Thanks guys. Sometimes some simple homemade pieces AND the right tools make all the difference. I know there are people out there that wouldn't buy a flex head ratchet---as you can see this is one job it really comes in handy. I personally will buy or make a tool if it makes my life easier--even if I only use it a couple of times.

The plate was a great idea. Again, I modified it from something I saw on here. I feel this is a bit more superior. I dropped the nut once, a shim three times, and a cotter pin once. I never worried about them going anywhere where they shouldn't have been.

Another idea I thought of after the fact, a couple of small flat magnets sitting on top would hopefully attract the offending falling pieces so the truly don't go anywhere.

What I found is all those oddly shaped tools Dad had picked up over the years can in handy as very one of those odd shapes has a purpose. one being the 4th rod and it worked perfect as did the flywheel wrench and so others.The carb wrench is another good one. Cheers Colin

Back in the late 30's my Grandfather had a "tired" Model A. In the back was a wood box filled with those bendy wrenches Colin mentioned. Comes out one morning and the car's gone. Stolen. He gets a call from the cops 2 days later saying they recovered the car. He goes to the station and his first question to the Desk Sergeant was " Is the box of tools in it "? Answer: No. He actually walked out and left the junker there.

It would be great to have this in some place on the forum where it's easily accessible. "Dauntless Geezer"?

Mike, If Steve wanted to revamp some wording and add it to his site, I would be fine with that. I am just happy to put it out there as I don't believe I have seen any pictures with details. And as we all know, a picture is worth a thousand words.

Sometimes newbies need more than "get the manual and just do it". Steve's Dauntless Geezer website is a perfect example of doing everything you can to help using modern age equipment (computers and cameras). Mike Benders video's are another outstanding resource. I just do my little part as I can.

Great article, but I've found just stuffing rags in there to be adequate. What puzzles me is I would like to see the vendors sell more accurate shims for the rods, in .001, .002. I have to make my own, and it's a pain in the butt!

The thing I like about the plate is it fills a majority of the void in the pan. Yes, you could just fill the sump with rags, but I get the feeling it would take a whole lot more than the 4 I used. The plate extends from the back edge inspection cover flange to the flywheel/magnets. I then put a rag on the voids on either side, one in the middle, and one across the whole thing.

Plus when a part falls, to me anyways, it is easier to find it on a hard flat surface.

Chad I have a craftsman flex head ratchet that looks just like that been worn out and replaced 3 times. I hear the new ones aren't as good