After removal of my gas tank for cleaning, when I went to adjust the brake and reverse pedal, I noticed that my slow speed notch was chewed up. (see attached photo). After doing a forum search about the notch, I realized that someone along the way had replaced the notch pin with some type of screw!

Also, under further examination, it appears that at least my brake band, if not all bands need replacement.

My questions are: How does one remove the old slow speed notch for replacement? Anyone have an idea as to why the notch has groves in the end of it? And speaking of groves, my brake drum has many. Does the brake drum need to come out, or can I use it as it is?

Thanks for any and all help. 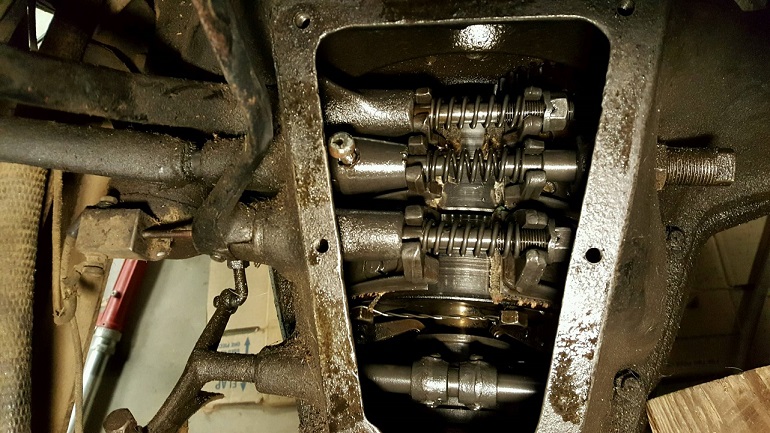 A picture of the slow speed notch. 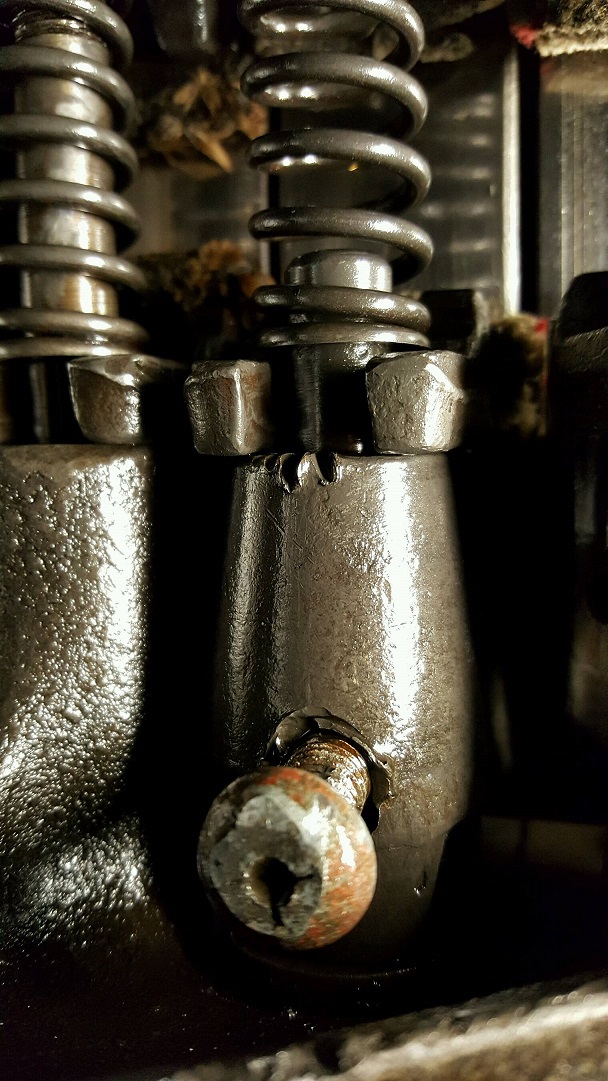 Your brake drum looks o.k. to me, from what is showing of it.

The grooves in the end of the cam are from past mishandling. Probably someone used a cold chisel to drive it on the shaft. The grooves do not hurt anything. To replace that bolt, (which I would suggest), and put in a proper pin, you will need to remove the hogshead. Although, you could probably remove the bolt and slide out the pedal shaft just as it sits. The problem is being able to peen both ends of the new pin with the hogshead in place. It's all just much easier with the hogshead off.

Lang's calls it a "Notch". The cam is the part that attaches to the inside of the trans cover.

Go down to near the bottom of this thread.

It shows me removing and replacing the notch and the cam

I'll be darned. Never saw that before. O.K. "Notch" it is... Learned a new thing today.

I would recommend that you pull off the hogs head and replace both the notch and the cam. If the shaft, or shafts are worn replace them too. The linings do need replacement. The most important thing about the drums is to check for cracking. The most dangerous cracks would go across the surface of the drum and would wear out the lining very rapidly. The grooves running around the drum are not as serious. The bands will conform to them.

To go farther, you would need to pull the engine and transmission, and if you care to do that I would recommend going through everything and replace or repair anything which needs fixing including a new magneto winding and recharge of the magnets.

You can get booklets from the club on Engine, Transmission, Electrical system. Those booklets give step by step instructions for inspection and repair.

When you put things together, your low pedal should move down about an inch before it begins to compress the drum. That first inch will be used to move the high speed clutch into neutral. Then as the pedal is moved farther down the band is compressed around the drum which gives you low gear. When the notch and cam get worn, you will find that the band does not begin to compress until the pedal is almost to the floorboard and so you need to adjust the band too tight. That will cause the band to drag and overheat which will wear the band too fast and overheat leading to drum failure.
Norm

Listen to Norm above. Read his last paragraph - been there done that. It's much easier to spend the hours and the labor to pull the hogshead, and replace parts than to replace the drum. You will do damage faster than you think you will

My worn cam and notch vs the pair that I just installed. 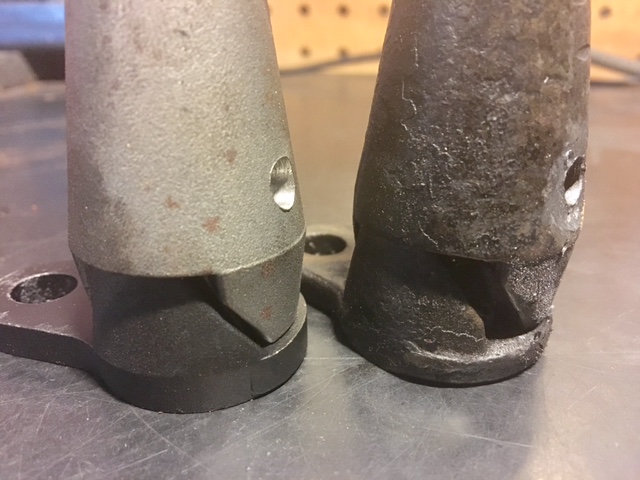 Great, thanks for the fast and informative replies from everyone.

I think whoever put the screw in the notch vs. the proper pin, did what I would call "staked" the screw in order to hold it in place. I don't know if it really matters at this point since it has evidently stayed in place for a very long time.

For the life of me, I have never been able to determine when band linings are done. Is there any criteria for deciding when to replace your band linings??? Also, the linings that are in the vehicle now, have what appear to be some red thread running through what looks like maybe cotton. Can anyone tell me what type of linings these are?

I hope there wasn't a nut on the other end of that screw at one point.

I would just build up up the worn surfaces with a touch of weld. Cheaper and faster, but that's just me.

Chadwick, I don't think it is going anywhere since it has been there for the last 11 years that I have had it.

David, I am thinking more like you. I always try to find the easy way out no matter what.

Can anyone tell me when you need to change the bands? Thickness, how they look etc?

Do bands that appear to be off-white with red thread happen to be cotton?

"Can anyone tell me when you need to change the bands? Thickness, how they look etc?"

You've basically got it. They especially need changing when the lining material is no longer present at the ends of the bands, such as the case of your brake band, where the lining is gone from the left end. You can also see it getting thinner. Really though, it's when the band ends, (ears), start to get close together and you can see that the available range of adjustment is reaching the end. In the case of the low band, when the adjuster has been screwed in until there's maybe just 1/4" of threads left showing outside of the lock nut, you know you're getting ready for a relining.

"Do bands that appear to be off-white with red thread happen to be cotton?"

Yes, those are almost certainly cotton. Basically, any woven band that isn't a pale yellow color, (Kevlar), is most likely cotton. Don't know what the new, black Scandinavia bands are made from, but they're about the worst choice for replacement anyway, so... I'm not aware of anybody making new cotton bands. I replace mine with Kevlar. BUT, be certain your pedal cams are in good shape and DO NOT adjust the bands too tight. Just tight enough to get the job done is a good rule of thumb. Another choice is wood bands. I've never tried them. Some folks love them, others do not. That's the way love goes...