There is an interesting little Ford runabout in the lower center of this shorpy photo,

The photo date is supposed to be June 1915 but there isn't anything in the photo to back that up.

However, the car has a slanted '14 style windshield and square side lamps. Also, curved rear fenders and electric headlamps. A little too distant to make out for sure but it is a flat firewall car with '15 rear fenders. 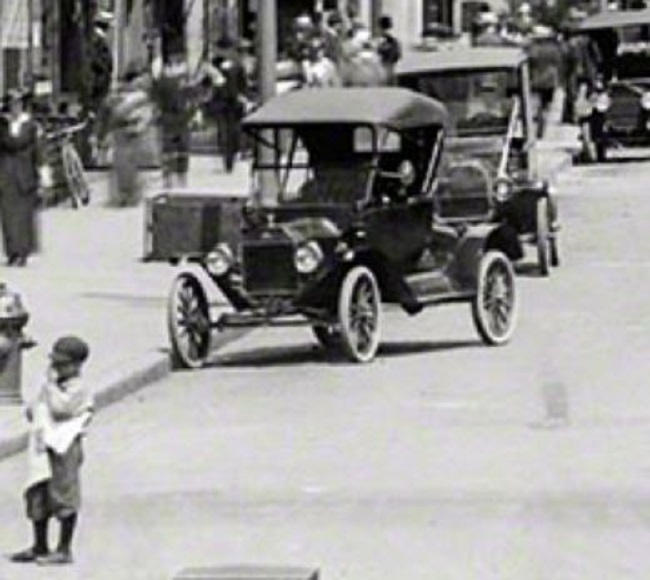 If the date is correct, it would be almost a new car with the billed '15 style front fenders.

Someone else may know how to enlarge the car in the photo better than I did so please do if you can.

I can see the bonnets on the headlamps, they appear to be electrified black and brass gas lamps. The side lamps appear to be late '14 style (although I won't claim to really be an expert on that detail). I think it does have the '14 STYLE firewall, but was probably built in fiscal year 1915, and maybe even calendar year '15. Records indicate that the '14 STYLE (mostly touring cars, but also some runabouts) were being assembled in some branch assembly plants as late as April of 1915.
There does not appear (at least not yet) to be any official record, however some empirical evidence and speculation is that the fenders (both fronts and rears) got a bit mixed up in those months. I have never seen absolute proof, but evidence of '14 style cars with '15 style fenders, and '15 style cars with '14 style fenders. It looks to me that this may likely have been one of those cars.
Great photo! Thank you for sharing.
Drive carefully, and enjoy, W2

I think the same as Larry on this one. Note the replaced curved rear fenders.Top looks wider than 14 but that could be these old eyes. Nice picture.

It does have billed fenders, which Ford used in most of 1912 model year, and in all of 1915 model year. I played with the image and still can't see anything that would differentiate it from 1913 or 1914. Just too small of an image. 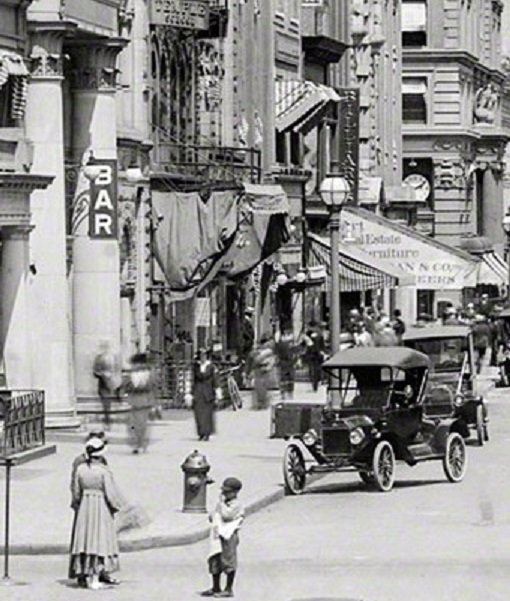 Far out question? Why would this 13 have rounded rear fenders? Royce made an interesting observation in that billed fenders were used on 12s, rounded fenders were used on 12 torpedoes The 13 roadster was referred to in some Ford literature as a Torpedo. The windshield is similar to the 11 torpedo both folding forward . Wish a factory man was alive to let us know if a few of these 13 torpedoes had 12 rear fenders. The more I look at top( body is wider on 13 roadster) and windshield ,apparent tufted seat back, the more I am convinced it is a 13. Like Royce I wish the picture was larger and clearer.

The 1915 style rounded rear fenders were used for a short time in combination with the 1914 style firewall (at least they were on the bare chassis), I own one. My ALF Fire Chiefs car chassis was built in the beginning of October 1914 and it has its original sheet metal. 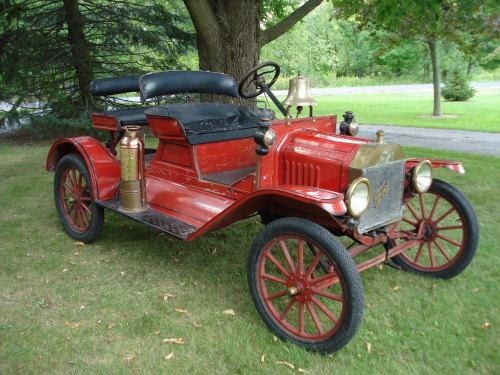 The photo below is a photo of the mocked-up prototype for the Chiefs car. Mine is believed to be the first production Chiefs car built and may even be this vehicle once the front seat was finished. 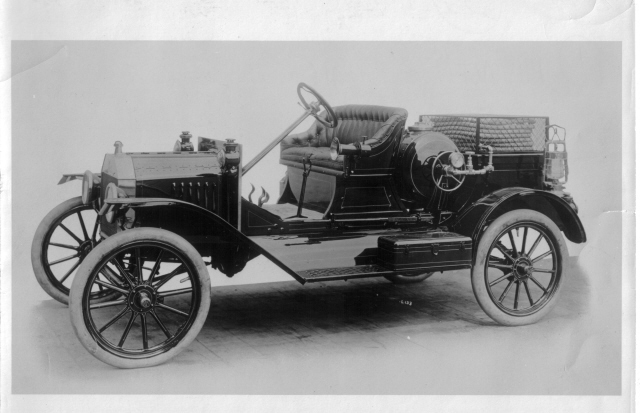 As a side note, this vehicle has mixed pedals also. 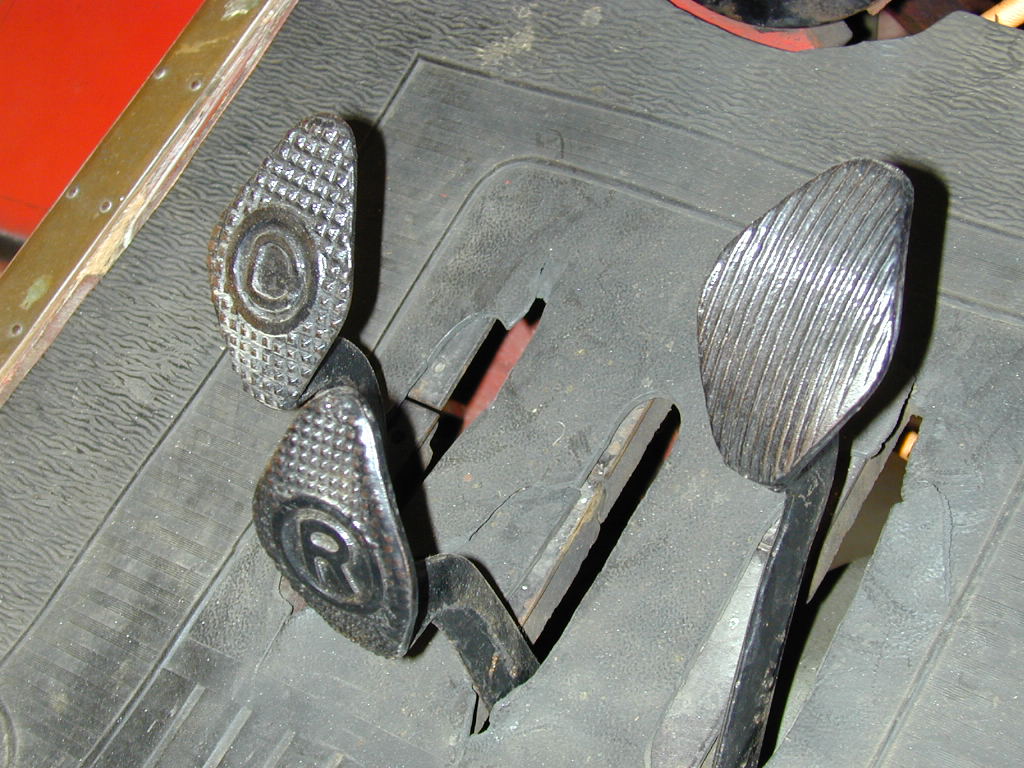 The 15 style bodies on open cars started about April 1915. Bare chassis before then would have wooden firewall. The closed cars were earlier I think. Great looking Fire truck! Thanks for comments. Wish photo was larger and clearer

The Encyclopedia has the following listed...

It doesn't date the bare chassis production for my case.

My fire truck was called a 1915 by ALF. I believe they went by when a vehicle was ordered or completed, not the chassis makers model year.

Wish I could see if the hood has louvers in the period photo.

The older T s are so cool I only have 26-27 models but look forward to finding a early coupe. Tim

That is such a great picture, what city do you think that is? The paper boy with the cap selling on the street corner, its not just in the movies!

Follow the link. This is the caption from where it is posted on Shorpy: 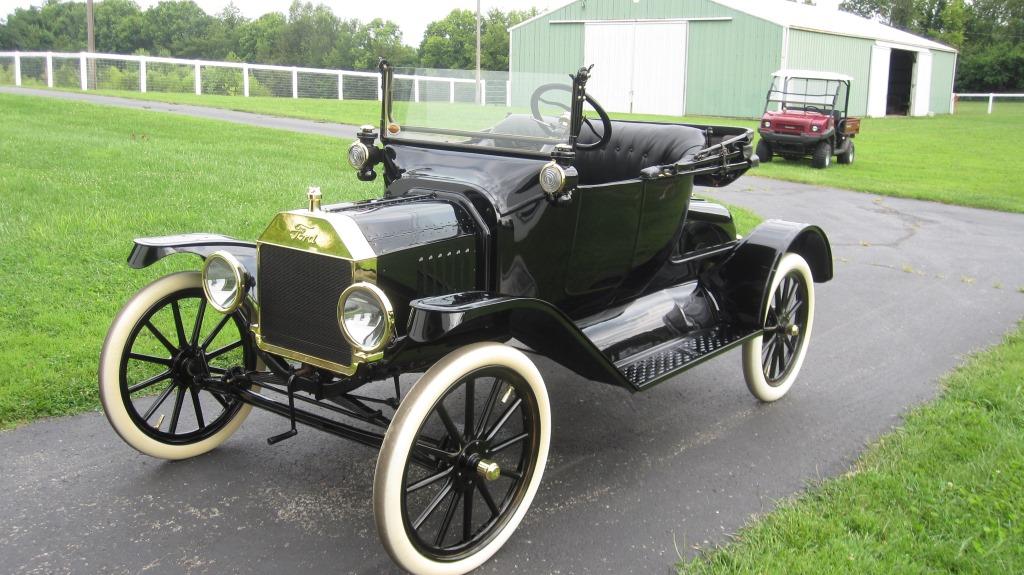 I'd rather see the same detailed photo of the T van behind the roadster.

Check the fenders on the 1925 coupe in this month's Hemmings: www.hmn.com.1911380. Henry was really using some leftovers on this one!

There is no speedometer cable draped down where you would expect to see it. Later '14's came without speedometers so that is probably what we have there.

Since Royce cleaned up the photo a little, the horn on the firewall seems to show as well as the bulb just under that neat rear view mirror.

We'll never know why this rather new car had '15 rear fenders but that is why I posted it. Too bad it was so small.

Looks like a Bujck behind the roadster. Not Ford