Any thoughts about the many good 'demountable' :-) wireless battery LED turn signal kits for my T such as:

The problem I see with bike turn signals is that left and right are so close together that I expect from a distance you can't distinguish between them. Automobile signals are on opposite sides of the vehicle. Presumably the bike unit is mounted in the middle, where its position doesn't indicate direction.

Not only that, since the bike signals are basically just that, getting them mounted on an otherwise bouncy, shaky Model T is somewhat of a problem. I have E-Lights from the Egypt garage on mine, and while they're not perfect they do the job fairly well. When I hit the button to activate them, I notice the bozo's behind me backing off a bit. They do get a little washed out if direct sunlight is on them however. I guess the only real good signals are something hard-wired, and fairly large. I can't wrap my head around those types.

I bought these off Amazon for my Model T and they work great and they only cost $26 with free shipping.

I have the E-Lights and find them to be better than nothing but they can't be seen from the front so I'm in the process of hard wiring an old set of Duplex signals.

It's a tough call with any turn signal set up. First off as mentioned above they need to be where the chimps that talk that are behind you expect them to be. The second is, from my experience, you're in the way so they don't appear to make a big difference on how you're treated on the road. Sorry to say it but the worst open road experience I had with T driving was just after I installed my hard wired 4 corner turn signal set up. I won't go into details here but I quickly realized the only person who felt safer was me. Here's a shot of my "their where their supposed to be" totally removable rear lights. 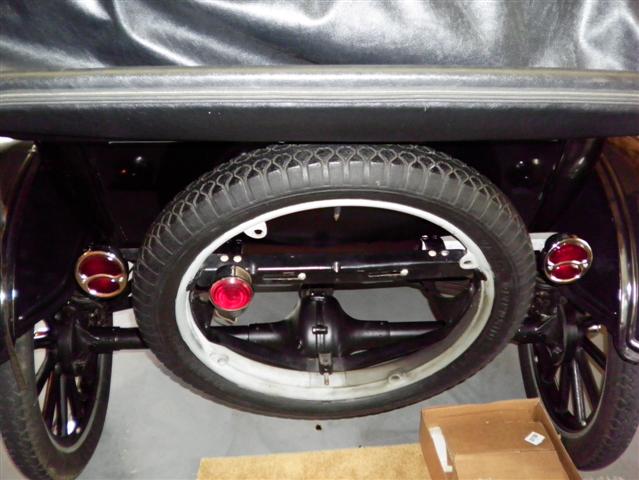 I have looked into these for my WWII jeep, which does not have turn signals on it. I was looking into getting two sets that could be on the same remote and mounting the two lights on each side of the side rear panel by the bumperettes. Blacking out the inner lights so that the left light would blink towards the left on the left side and the right would blink on the right side of the right light.

But, I didn't do anything further with them. Yes, no front signals is an issue.

On the jeep the hand signals is more valuable because your hands aren't busy doing everything else like on the T. But we have learned from experience, that 99percent of the other drives on the road have no idea what your hand signals mean.

Amazing how many drivers want to ride your butt and pull out in front of you because they think you are moving too slow for them.

Robert, that is true about hand signals. I use hand signals and people wave back at me! I guess because I use all the fingers on one hand they dont understand!

Most Harley riders I've seen around here use hand signals for turns and slowing. At least there is some exposure to hand signals from the Motorcycle crowd.

Gee Bob, Once in a while I get hand signals from other motorist! Not sure what it means as there is only one finger in an asseverated position!

I have one of the demountable signal kits at the recommendation of Jay Leno (I didn't get the much more expensive version he touts, though). Can't say it makes a difference but it makes me feel better. I still hand signal... there are a lot of self-involved and stupid people on the roads today.

When I us hand signals I point. I hope that will help some of the brighter folks figure out what I'm doing.

Steve - Maybe somebody should make a bunch of long-sleeve shirts that have large letters on the back of the left-hand sleeve that spells out "TURN SIGNAL" when you stick your arm out. Might not work too well for a right turn, but could be quite readable when hand signaling a left turn, and that's the important one!

It is my understanding they don't teach hand signals in Driver Education anymore. So keep in mind the next time you find yourself contending with a 17 year old zit faced kid, baseball cap on backwards, speeding in his 400hp Mustang, your hand signals mean nothing to him.

Washington state does but others may not- states are not very consistent in such things. I teach drivers ed and conduct exams. Hand signals must be demonstrated successfully before a drive test can begin. All the teenagers know them but most of the thirty or forty somethings being re-examined because they let their license expire or got a DUI have never heard of such a thing. I also have to check their lights. Center brake lights burn out ten times more frequently than any other (why? You would think any one of them would have an equal chance, but no). Often when I point out the burned out bulb, the people say they had no idea there was a light there at all.

My son installed the turn signal portion of a street legal kit for side by sides in my 23 Roadster and it has worked out very well. The lights are LED and aren’t much bigger than large marbles. They are mounted both fore and aft. We built brackets for the lights without drilling any holes in the car’s metal. The rear brackets attach with 4 wood screws under the rear deck and the front ones use the radiator bolts. There is a small “instrument panel” with a 3 way toggle switch and indicators on each side of the switch that is installed under the dash on the left side of the car.. We went with a 12 volt lawn mower battery to run the system so it can be removed easily by the next owner if desired. The whole system is discreet and cleanly installed.

Hand signals are still on the Califunny written driving test...so the book covers them in about a paragraph.

The problem with hand signals of course...nobody can see them at night, that and usually other drivers don't recognize them for what they are...hell, people of the street corners think you're waving at them and whip out their cell phones and wave back.

I had originally planned on making my side lights into front turn signals, but have since decided to just buy the small amber lights and mount them on my fenders below my headlight...it's easier and they'll be noticed more than my side light would be and besides I can still use my side lights if I want.