Please recommend a turn signal unit that is best for a Model T. I would prefer a modern wireless model, similar to the ones used on bicycles.
But the bicycle sending unit doesn't seem to transmit beyond 5 feet though.
Been using arm signals but I notice that most younger drivers do not know the meaning.
What do you use?
Thanks for all comments.

As you say, many/most folks do not recognize hand signals. The same is true of most of the turn signals available for T Fords today. I speak of the lights not the wiring and such. The lights are very small and not bright like modern cars. In 2017 people are looking at large, bright lights. So, before you decide on one check to see if it can be seen. If it is small and dim, why use it ? Make your own. I used a pair of '23-'25 brake lights suspended from the top saddle irons on my touring. Front lights are about the same size with amber lenses from a struck stop chrome shop. I also cut amber lenses foir my rear lights. Wiring is simple and the 6 v flasher came from Autozone.
Switch is a DPST from an electrical shop.
Just make sure your signals can be seen.

In Arizona, knowledge of hand signals is still required and are shown in the driver’s manual. Motorcyclists still use hand signals, especially Harley riders. 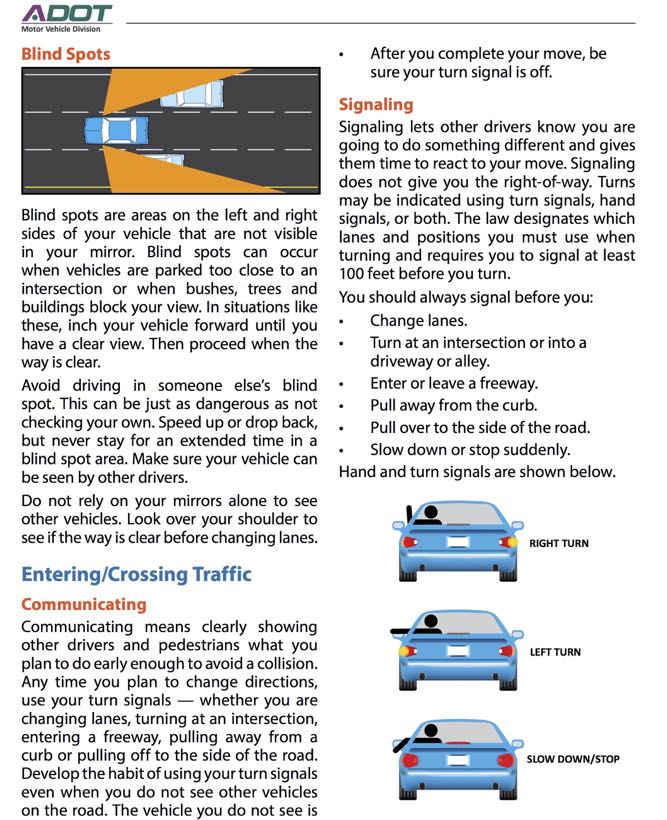 I pondered them, but opted for bright LED turn signals and brake lights.... led kits that went inside not-as-old-as-my-t light housings. I used the side cowl lamps for forward facing turn signals (led kits as well)... I hope to convert the headlamps with LED laps as well.

I opted for the (hopefully) dependability of wired lamps. I would rather keep everything period... but living in the Detroit area, and not out in the country on quiet roads, safety first. You can't enjoy your car if you're dead...

Enjoy your results... as I am sure they will be a vast improvement!

For wired units, check your state rules, depending on your state, if you have them on the rear you have to have them on the front and they have to work and be used once you install them. I know someone that has the ones meant for cars/trucks that have the magnetic base and work like the bike type but with a longer transmission of signal, he loves them and can be moved from car to car.
http://smartsignals.com/tech/
https://www.google.com/search?q=SmartSignals&ie=utf-8&oe=utf-8

Check out the electronic turn signal modules from Speedway Motors, part no. 910-64050 or 910-64070. The turn signals will stay on from about 3 to 45 seconds in proportion to how long you hold the switch. They can be turned off at any point by momentarily hitting the switch. The built in timer stops while your foot is on the brake. These are neat devices, I have them on 3 vehicles. They also include 4 way flashers.
The down side is they are 12 volt.

This thread was requesting wireless turn signals. Be very careful installing ANY type of electronic turn signals. Model T's with their standard coils emit electrical interference. I have the Egypt Garage unit mounted on my 1910 and they work great. The only disadvantage is they don't turn off automatically.

I had high hopes for the wireless turn-signals made by a company called Smart Signals. _Their wireless setup should have sold like hotcakes (Remember that expression?), but this was an extremely high quality setup with a necessarily corresponding high price of over $350, if I remember correctly. _Apparently, not enough people purchased them to justify continued production. _I did a quick search on the internet and it appears Smart Signals are no longer available, which I think is a loss to the hobby.
Here's their outdated video:
https://www.youtube.com/watch?v=Y_gM6Ii9Vz4

I hated the idea of doing things to my car that would render it less original, but came to the conclusion that the kindest thing I could do for a daily-driver is protect it from other traffic. _Among other things, that meant tail lights, brake lights, turn signals and 4-way flashers. _I tried to add these in a non-permanent, unobtrusive way. Here's what I came up with for my 1915 Touring:

I added a pair of bolt-on lights to the saddle arms and they're easily removed. _They do triple duty as tail lights, turn signals and brake lights. _My kerosene tail light is also wired up to come on with the headlights and serve as a brakelight. 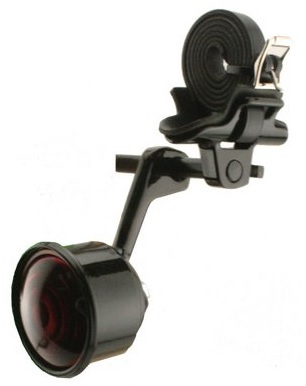 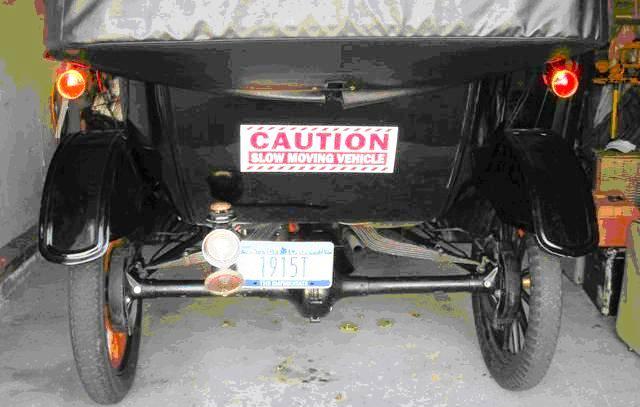 All my kerosene lanterns are now equipped with bulb sockets and so, I have turn signals in all four corners. _Sadly, the person who manufactured these socket adapter kits passed away, so it's now necessary to purchase the parts separately from Pep Boys or some other outlet and, with a length of wire clothes-hanger, solder an adapter together. 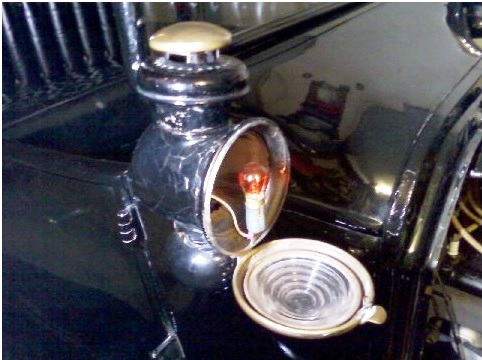 The brain-box for the turn-signal system came from some very nice folks at "Tickin' Through Time" and it fits very nicely in the rear seat storage compartment. 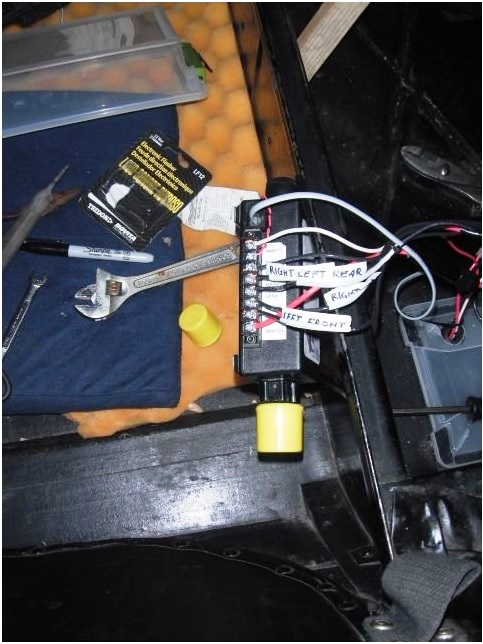 My turn signal switch is hidden in the bracket that holds my klaxon horn to the fake door. 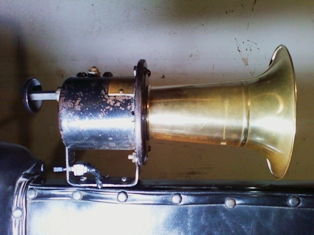 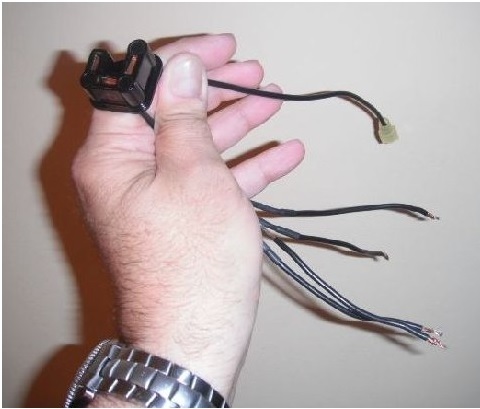 I also purchased a 4-way flasher harness from Tickin Through Time and it simply splices into their turn-signal brain-box. _You can hide the on-off button anywhere. _Here's their web address:

Brake light switches are available from any of the usual Model T supply outlets and come in a couple of different configurations, but trust me, you want John Regan's "Fun Projects" version. _His is so much better than the overseas-made unit, it's not even funny (See? You're not laughing, are you?).

Anyway, as you can see, the originality of my car was preserved and all of this lighting stuff and wiring can simply be unbolted and removed (but you won't want to remove it).

Once you've got the lamps mounted, you can choose to do the heretical thing and drill holes so as to hide the wires between the sheet-metal and upholstery (and if you do, use heavy-gauge wires that won't get hot), or you can avoid putting non-historical holes in your historical vehicle and instead, run the wires on the outside. _From a purist's point of view, turn-signals don't belong on a Model T anyway, so a neatly executed, short run of wires won't make matters any worse. 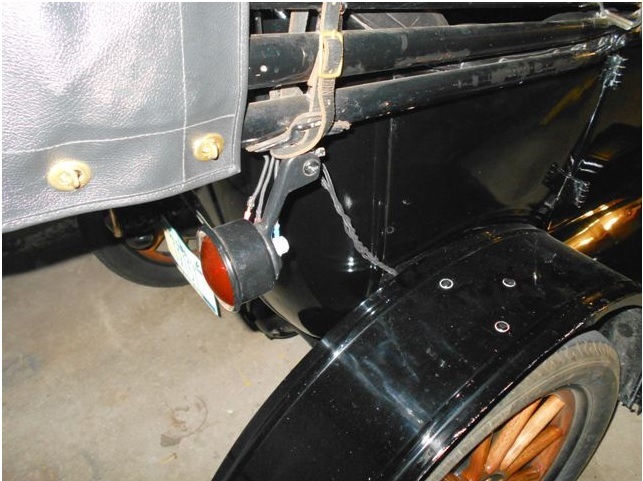 As you can see in the photo, I used individual wires, but they'll would look much better once I encase them in a fabric loom (such as you have on your headlights). _Though historically incorrect, they'll be neat, unobtrusive, and to a non-expert, will look correct.

Because my side-lamps didn't come with wick-knobs, I was able to avoid drilling the precious metal by running the wires through the existing wick-knob holes. 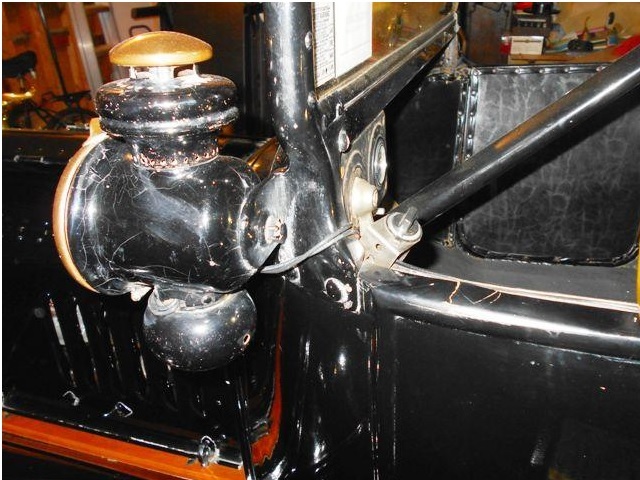 Even the very short, discreet run of wires between the lamps and the upholstered wall would probably send the purist into a fit of apoplexy, but that's his problem. _You can put safety first and still present a nice, neat appearance.

A left-hand-drive touring car or roadster doesn't absolutely need turn-signals, assuming you do most of your driving during the daytime, with your top down, but from a right-hand-drive car, mirror-image turn signals will only confuse other drivers. _In an enclosed car, hand signals can only be seen from your left side, so any driver to your right rear corner won't know that you're about to change lanes in his direction. _And of course, nobody sees hand signals at night.

I have seen advertisements for the bent wire socket holder for tail and cowl lamps in era publications so you could add electric lights in same. So at least those could be era correct esp if cloth covered wire is used!

I bought a set of 6 volt LED lights for my 18 centerdoor ten years ago. Worked well and bright. Now they have a full setup with headlights, turn signals and brake light system ready to install kit. I think it may be only 12 volts but they did have it in 6 volts before, call and talk to them. www.harrisonspecialties.com 763-441-0176 Kerry

I installed very simple and inexpensive turn signals using Frank Harris wiring diagram w/o the tell tale light. I went to O Reillys for the wires switch and flasher and etrailer for the trailer bullet lights. The cost was less than 40 bucks.
Mind you I have a small 12v for firing the coils.
This set up is not for everyone but it is simple and works.

I'm impressed with your safety upgrades. Your T even has a passenger side air bag! Wow!!

Henry,
I wish I could take credit for that, but I got the airbag idea from another forum member about four years ago. _I did a MTFCA-forum word-search of "airbag" so as to give proper credit to the originator of the idea, but nothing came up in the relevant time period. _Whomever came up with it was a clever comedian, indeed. 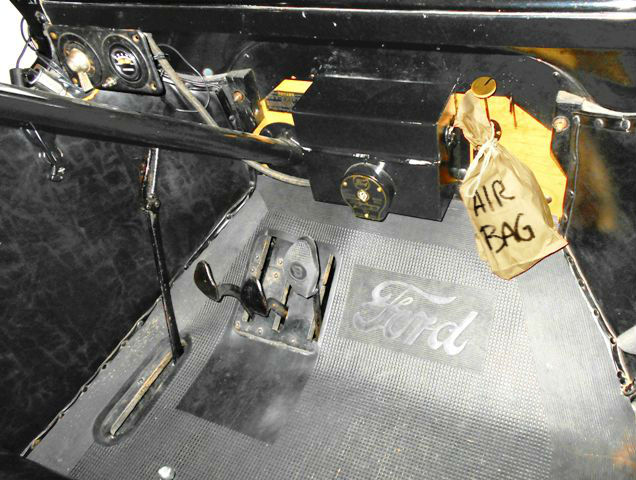 I need to figure something out myself for my Ts. I like the wireless magnetic signals I have seen on line. I live out but people come up on you even in a Model A that I normally run a little faster in texting and trying to pass you. That needs to be my next little project. Tim