Howdy boys, can anyone give me sone info on rebuilding an NH carb? Float setting especially.

The float should hang down 1/4" from the top of the carb body. There are three passages that need to be drilled, cleaned and resealed. I will try to post a photo later. Check the throttle shaft for excessive wear. Other then that, if the needle and seat are in good condition there is not too much too it.

All replaceable parts for the NH are available thru the vendors.... that's good.

Choke shafts are not as tempermental performance wise.

Soak carb body in good carb solvent for a few days, blow out passages with compressed air.
Some may even suggest to drill out lead plugs & clean passages, .... necessary if carb was neglected in mud, rust, old oily crap.

Use hot air pipe on intake

FYI, I had nothing but trouble with the gross jet ball style gas inlet valve. It constantly stuck closed. So far the viton is working great. I also found one of my NH carbs had the choke butterfly, when open, was "over center" thus slightly interupting the incomming air flow. Made a small shim on the stop nub cast into carb body to stop the butterfly on center.

Here is the photo. The three left most ports need to have the brass plugs drilled out, cleaned out and then resealed. I used a drill bit to clean them out then tapped the hole and used a set screw to reseal. Some guys just use a lead or brass plug hammered in. These passages are the idle circuit and are important to the overall performance of the carburetor. 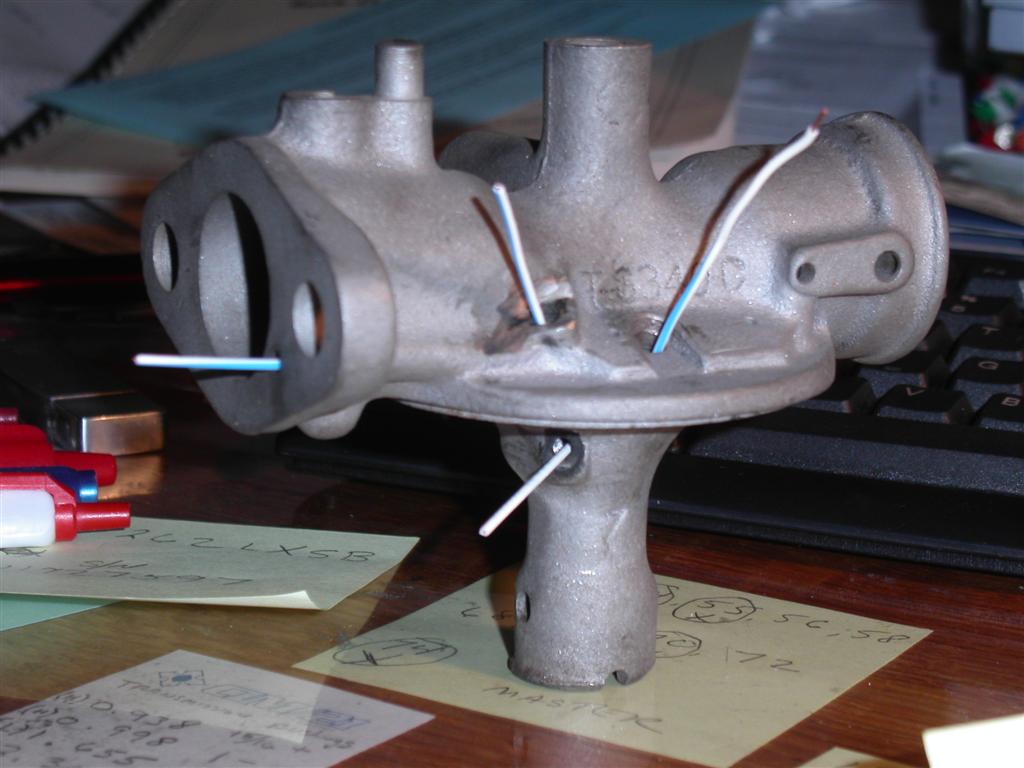 Hey Bob, Thats cool. May be a dumb question, but, how long should each plug be? Also, what drill bit do you use? Is it critical?

I think I used a #36 which is the tap drill for a 6-32 screw. The plugs only need to be about 1/8" or 3-4 threads or deep enough so as not to interfere with the passage. I put the set screws in with Permatex to seal the threads.

That sounds pretty easy. By permatex you mean RTV sealant?

Permatex 2B gasket sealant. RTV should work OK too.

If I can rebuild an NH, anybody can.

If you are interested I can refer you to the fellow who rebuilt mine. He is very reasonable and did a good job. I figured I would screw it up a couple of times before I got it right. Send me an e-mail - it's on my profile.

When you drill out the brass plugs, do you find that the drill bit follows the passage pretty easily, or do you have be extremely careful to not get over into the cast iron?

I've never drilled out a welch plug. I've always just shot carb cleaner through the passages and have been lucky so far. This was on other carbs, not T. I do have an NH that I bought to rebuild. Just haven't gotten around to it. I was thinking about drilling these out, though. Let me know what to expect.

The brass plugs were 1/8 so use a size smaller drill bit. It drills easily through the brass ,making replacement easy.

One word caution. Do not try to drill the passages with a a drill bit. Just drill out the plugs then use stiff wire clean them. A broken drill bit deep inside one of these passages and you have scrap iron. Don't ask how I know!!

Do NH carburetors work in Vermont or do I need to find a VT carb for my car?

Ford didn't make any model Ts for vermont. Only the special, locally sold, model VT. Even the carb was unique. I've never seen one.

A Kingston L4 is a good cure for an NH.

A Kingston L4 is a Ken Swan states a good carb. I have two of them doing wheel chock duty and my buddy Ralph does the same with the ones he has collected.

How would the air passage through the flange be useful? Wouldn't it be covered by the carb to manifold gasket?-Howard

BTW I have mine off the car and I'm thinking of doing a rebuild on it.

I use brazing rod to plug those passages. A twist drill works just fine to clean out the passages. Just don't get one that won't go through easily. Snyders offers them in kit form too.
We are checking out the possibility of making new NH needle and seats. The repros are garbage. If we can get them made, I'll let you know. NH carburetors work good in CA too!

what exactly is wrong with the needles and seats available for NHs? I've rebuilt several with great success. Success defined as smooth slow idle, 17-18 MPG and no adjustment from idle to fast running. Have I just been lucky with the parts I've bought?

The passage hole on the mount flange will be sealed with the gasket. I would still seal it properly just for a warm fuzzy. The other two passsages need to be properly pluged by what ever method you prefer.