Here is a link to The Henry Ford:
http://www.hfmgv.org/exhibits/showroom/1908/model.t.html
The phrase about "You can paint it any color, so long as it's black" is not the same as I remember it.
I remember that it was said as "You can have any color as long as it is black".
I know that it is debated if Henry said anything at all about the color choices, but I was just wondering if this was a misquote of a nonquote?

Does anyone have a printed version of the quote from somewhere else?

The quote is contained in Henry Ford's autobiography, which was written by a subordinate with Henry supposedly dictating. I don't have a page number for you.

This was probably not the group of words Henry used when the decision was being made to paint all Model Ts black. At the time the book was written (circa 1920) the phrase was already in common usage, so it could be that Henry adopted it after the fact. However evidence is that Henry himself said the words in later years.

The famous quote is found in "My Life and Work", by Henry Ford, in collaboration with Samuel Crowther, 1922, page 72.

Seems by actual facts to be correct, but as written in the book Ford's statment probably wasn't made in 1909 as the book recites.

Therefore in 1909 I announced one morning, without an previous warning, that in the future we were going to build only one model, and the model was going to be "Model T", and that the chassis would be exactly the same for all cars, and I remarked: "Any customer can have a car painted any colour that he wants so long as it is black". 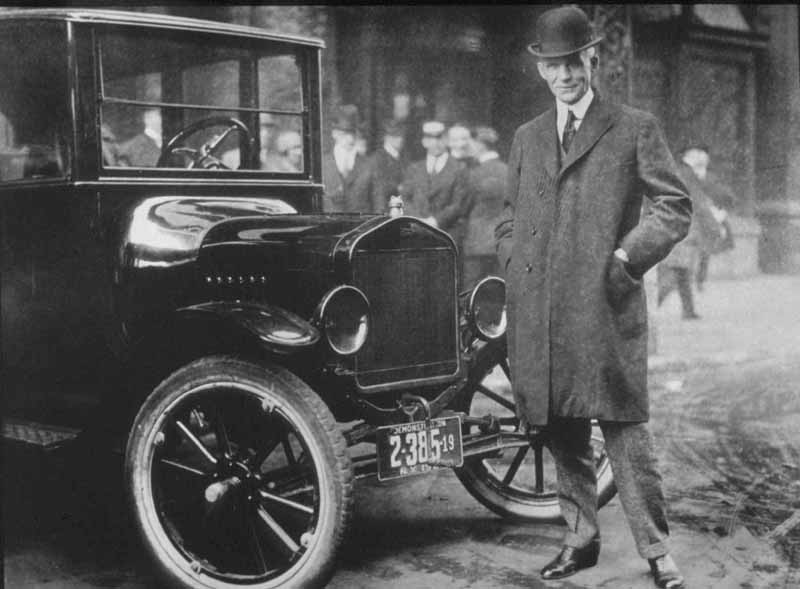 For those who would like to read My Life My Work from Henry Ford, the book is available free from the Gutenburg project at this site:

For all engineers, business men, anyone that wants to learn about manufacturing it is an essential.

If the quote says he made that decision in 1909, it took him a few years to implement it! Typical ghost-written biography, I'd guess Henry picked up on it as a good phrase after it was already current usage - you have to admit, it makes a good slogan. Implies the product is selling like hot cakes and represents good value. Makes a virtue of a fault.

This quote has always struck me as something that may have been written in a newspaper article or review about Model Ts. Something like; "A new Ford rolls out of the factory every three seconds. They are all alike, and all the same color. 'Henry says that you can have any color you want, as long as it is black."

I wonder if Henry was even the originator of the quote at all, or if he just adopted it later as some have speculated.

You can speculate on that quote, but Henry is famous for making many unique quotes, among one of many that I like is this one:

"When everything seems to be going against you, remember that an airplane takes off against the wind, not with it." ...Henry Ford

Isn't that what he said?

How about "History is Bunk" yet he spent a lot of time trying to preserve it.

I doubt that many of the phrases attributed to Henry Ford were actually uttered by him.

The original run of Ford Times contain a number of quotes ala Benjamin Franklin/Poor Richard's Almanac attributed to Henry Ford. However, I believe many of these were composed by professional writers and were done to puff up his image. Just another form of marketing and spinning his image.

On a side note, I saw a short sound film clip of Henry Ford speaking one time on public television (probably from a late 1920s or early 1930s newsreel). He didn't come across as a particularly articulate or good public speaker and he basically shrugged his shoulders after spoke to indicate he was finished. Not very impressive for a man who supposedly spewed out highly articulated words of wisdom on a regular basis. (Maybe he was camera shy.)

I have no doubt that he was an extremely intelligent and industrious man, however.

Henry Ford is often misquted as in the example of "History is Bunk". At the time Henry was disagreeing with a newspaper reporter who thought Napoleon's actions were comparable to the 1916 situation in Europe.

Here's the actual quote that it is derived from, with comments from a noted historian Eugen Weber:

A few years ago, in an essay called "Doing History," Weber analyzed Henry Ford's famous remark, "History is bunk." Since Ford was a bigot and a tyrant, that's usually quoted as an example of ignorance. But Weber used it to demonstrate that we can understand nothing except through context. Ford actually said "History is more or less bunk," which is slightly different, and he said it in 1916, in the middle of the First World War.

Ford thought that devotion to the past prevents us from grappling with the present and may encourage us to make war out of historical grievance. In 1914 all the European leaders knew history, Ford said, yet they blundered into the worst war ever.

On another occasion Ford recalled looking in American history books "to learn how our forefathers harrowed the land"; he discovered that historians barely mentioned harrows, the iron-toothed rakes essential to modern farming. Harrows, Ford argued, meant more in history than guns and speeches. When history "excludes harrows, and all the rest of daily life," then history is bunk.

Maybe Ford felt strongly about harrows because he manufactured them, Weber says; even so, he was right when he argued that history should tell how ordinary people lived. And Ford won. The rise of social history began in the 1920s with the Annales movement in France, and has spread ever since. As Weber says, "The sort of history that Ford wanted is pretty much the history that we do today."

THANK YOU Sebastien Landry, for the link. I'v eprinted a copy for myself, I CANT WAIT to get started on the reading. However,I just got a phone call. We've got a grassland wildfire headed our way..... I GOTTA' GO !!!!

“History is more or less bunk. It’s tradition. We don’t want tradition. We want to live in the present, and the only history that is worth a tinker’s damn is the history we make today.” That's the full quote, and it is quite right! That quote is attributed to Henry in 1916.

As we now know, Henry was very committed to history. But, in 1916, there was much going on that I think he'd rather forget - the Peace Ship to Europe being amongst them! However, remembering that the Model T was still the leading automotive product at the time the statement was made, the quote becomes more relevant and fits better with his personality at that time. Soon after he would have to abandon his pacifist views and support the American war effort. He could move with the times!

But maybe I'm also guilty of taking that quote out of context. In sharp contrast to the "History is bunk" quote is this...

“There is a subtle danger in a man thinking that he is fixed for life. It indicates that the next jolt of the wheel of progress is going to fling him off.” That was published in 'My Life and Work' (1922) when the Model T was peaking in sales. But other carmakers were catching up and, by 1923, they were making faster, more comfortable cars with sliding gear transmissions and wheel brakes, painted in fashionable colours such as red! Henry remained very slow to react and, five years (or sooner) after that quote was published, Henry and entire Ford Motor Co came very, very close to being flung off that "wheel of progress"!

End of first parapgraph above should read....
That's the full quote, and the sentiment is quite right!
John!