My low band is slipping and my Ford manual has disappeared. Aside from being very careful not to drop anything inside, does anybody have advice/instructions/warnings before I take off the cover?

Tighten the band enough so that all the force you can muster with your foot will not bottom out the pedal against the stop, but it is as loose as possible with no slippage on hills.

The low band is adjusted from the outside - no need in removing the tranny cover, the ignition key, or anything in your shirt pocket(s).

Loosen the lock nut on the right side of the tranny cover, then turn the adjusting screw to the right to tighten the low speed band. 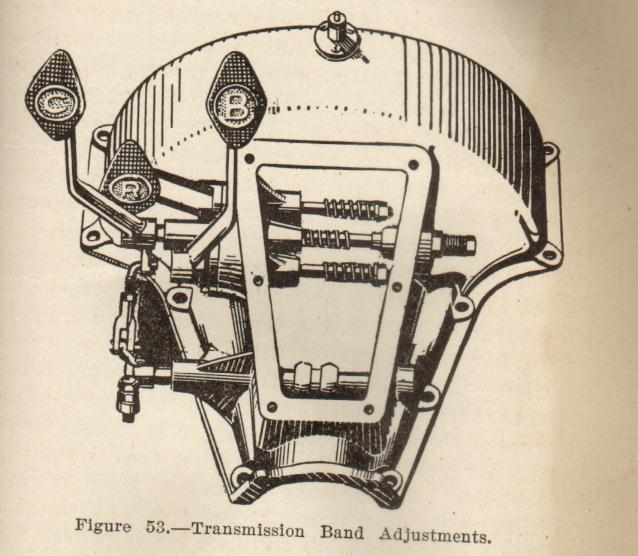 Armed with that information, I took a look at the transmission from my TT project, looked inside to see how the adjustment from the outside works, and adjusted the touring. A few minutes with a couple of wrenches made a big improvement. The former slow creep was transformed into a step-on-the-pedal-and-GO experience. I went to try it out on the "test corner". When the family wanted to get a new car in 1928, my uncle would have the dealer bring one out for a test drive. A nearby road goes south down a hill, and at the bottom another road intersects from the west at the bottom of a much steeper hill. Lester's test was to drive south, turn west, and go up that fairly short but very steep hill, all in high gear. The Hudson didn't make it without a downshift, and I assume the Model A didn't either, because they bought a Chebby. A Packard could have done it of course, by my family wouldn't have had the money for something like that. Today my T made the corner and most of the hill OK, but I had to use the pedal for the steepest part at the top. It worked just as it should, so I am happy. Gentlemen, thanks for the info.

I have read how to adjust the low speed band in two MTFCA publications and I think I am confused. When you adjust the low nut you have to adjust the screw on the end of that rocker arm too? It seems that these two adjustments are very interactive. I was able to adjust for a good grab on the low speed, but I can't seem to get rid of that slight creep. Everything concerning the little clevis and end play seem to be in order. Is there some slight nuance I am missing in this adjustment process. Does the rocker move like a seesaw only or does it also have an in and out movement with relation to the side of the transmission like the pedals do?
Howard

The clevis adjustment gets rid of creep caused by the clutch being not fully disengaged. Make it longer to get rid of this problem.

It could also be that you have the three clutch adjustment screws too far in, which can also cause creeping.

Here is a diagram on how to adjust the clevis on the clutch.
Norm 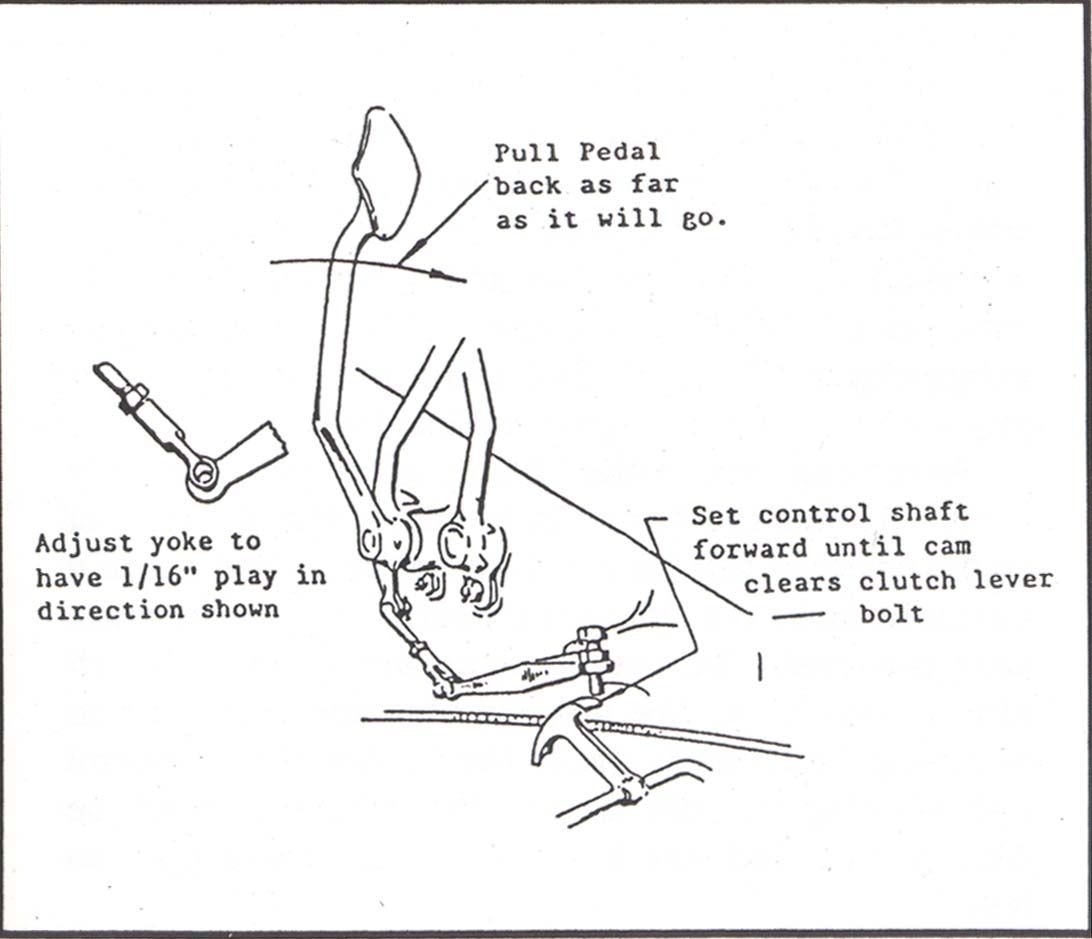 Clutch controls high speed ONLY: enganged with plates compressed by spring for high speed, otherwise disengaged with plates loose. The clutch is controlled by a fork which moves forward and rearward.

Adjust the low speed band so that when pushing hard on the low speed pedal the pedal is 1/4" to 1/2" from bottoming against the openning in the floor board. That's all there is to it.

Adjust the reverse pedal in the same manner.

Adjust the clutch linkage as in Norm's post above.

Often it is impossible to adjust the clutch as per the Ford instructions (like Norm's picture) because the clevis and clutch pedal holes get elongated and the "L" shaped threaded part gets worn. I have had to make longer "L" pieces to be able to get sufficient adjustment on the clevis length.

Thanks for all the input. Maybe it isn't as complicated as my mind made it out to be! I think I got it working right.
Stay tuned for more questions on other aspects of the Model T!
Thanks-Howard