Does anyone know the correct answer. I have a 12 smooth side touring body B73666 June and would like to know what is the correct placement of the horn. First was the horn mounted through the firewall or on the outside of the body and second if through the firewall was the horn mounted horn up or horn down. To me it makes sense to mount it horn down to keep the rain from building up in the horn. I see pictures of both way of mounting the horn on 1912 bodies. Your thoughts.

Thanks I believe your correct. Engine number 131361. The car is what your calling a slab side and mostly original but did not come with the correct horn. Still was wondering about the single twist being mounted bell up or bell down as there are so many pictures showing both ways on this type of body. I still believe your correct in it being bell down.

Hello Richard:
Personally, I would mount it the way you like best. John Regan has the production drawing of this dash, where I don't recall whether this shows the horn bracket mounting holes? If so, that would cinch it. Equally interesting is whether this June of 12 horn was painted Black. Bruce's Black Book says the 1912 single twist horn was initially brass and later in 1912, Black with the brass cover. Many early photos show Black horns mounted on seemingly original cars, where the lamps and running board generator appear to be full brass. Regards,
Scott

Thanks again Scott. I did a search of John Regan name and found the production drawing for the 12 one piece dash. Like you said there is no indication for the horn bracket. But after chasing some older links and looking at what people are calling an original dash for 13 and 14 that do shows the oval bracket mark above the horn hole I believe we are right in saying that the horn bell was mounted downwards. I have a single twist Rubes now and plan on leaving it brass but mounting it bell downwards after your help. Thanks! But also agree with mounting it the way you like. 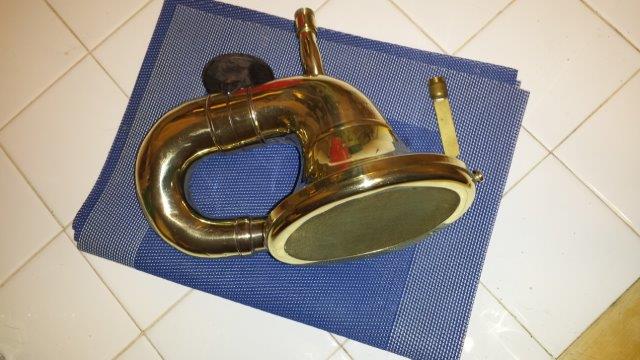 For what it's worth, my slab side '12 has the bell mounted up with the horn tube and bulb mounted outside of the body. It is all brass as are all of the lamps. My car was restored many years ago from a complete original car and probably shouldn't have been restored but that was the previous owners decision to make.

Val what is the engine ss# and body maker number just wondering. Also is the horn a single twist like the picture above or a multiple twist horn.

Richard...don't know how well this will all show up, but here's a pic of my '12 Commercial Roadster pickup, and you can see why the bell is at the top. 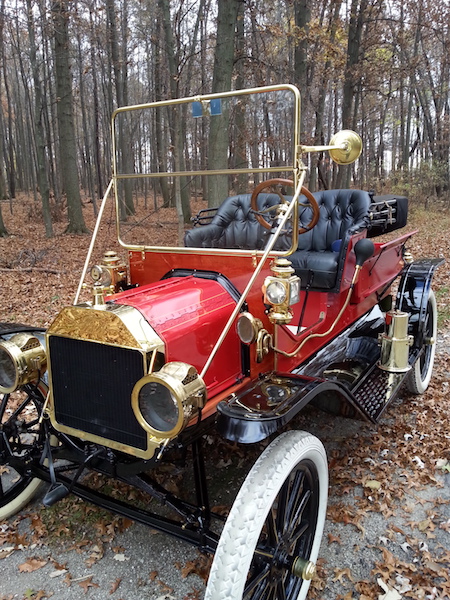 Richard my Vin is 114229. My horn is single twist. I don't have the body number handy as the car is in NY and I am in Florida but I did supply it to Hap years ago and may be able to find it on the forum as part of an old post. I don't have a decent picture of the drivers side showing the horn or I would post it, sorry.

FYI the horn hole initially was 7/8" diameter and was added to one piece 1912 dash on 4/13/12 and was located 3-1/2" in from edge and 10" up from the bottom edge. Very short time later on 5/1/12 the hole was changed to 1" diameter and moved out to 3" from edge. Interference with hood opening and closing was a constant problem with horn location and was still an issue in 1914 on some cars. Only finally solved by placing horn under the hood. You have to be very careful when opening and closing hood when you have a bulb horn. Better yet check the hood clearance carefully and fudge it a wee bit away if you have too to save repainting the hood. I think repro hoods might also aggravate the issue by having a wider lip at the hood bottom that sticks out further to scratch the horn as the hood goes up. Not sure about that since I have not looked carefully at an original hood.

So John....your opinion....was the single twist bell up or down? PS: Jump in here anytime Larry Smith.
Regards,
Scott

FWIW the pictures in the encyclopedia show the horn with the bell "up". Just sayin...after all these are just artist renditions. 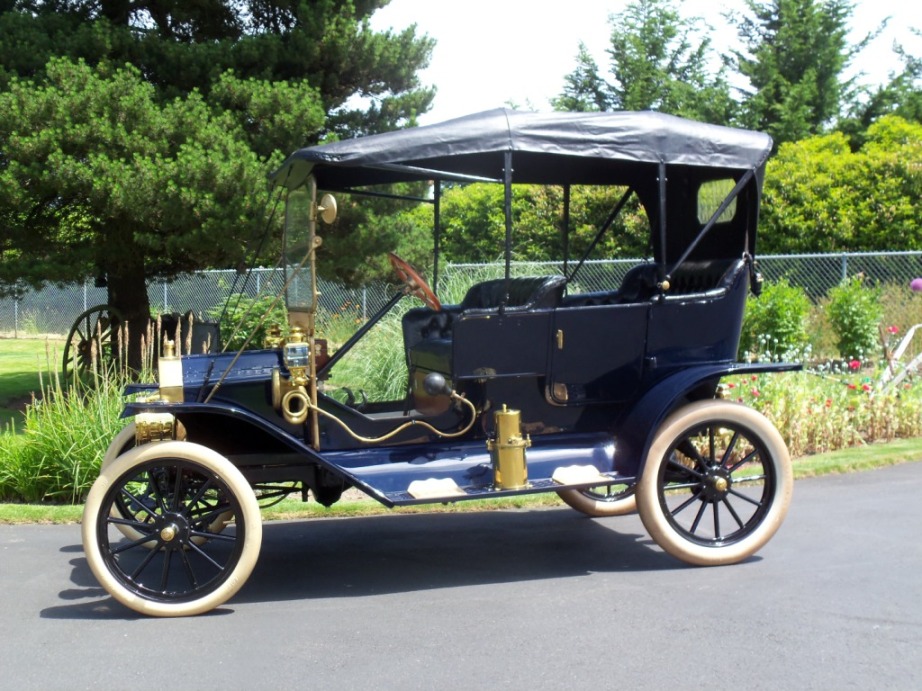 All horns until the so-called 3/4 twist in later '12 were mounted bell up. All 3/4 twist horns were bell down.

check my PROFILE photo of my 1912---Horn mounted as shown on a very original car...

With regard to BELL UP or BELL DOWN I would simply point out what I said about hood clearance. The hole on the dash is 3" from the side of the dash and 10" above the bottom edge. The air feed tube goes through that hole so mount the horn so that the bell is furthest away from the hood unless you don't have that choice.