So I've read the caster is supposed to be 5.5 degrees, and the Ford manual says to establish that by measuring from the top and bottom of the spindle body bushings to a vertical, looking for a 1/4" to 5/16" difference.

I'm going to guess people haven't been doing this wrong for 100 years. Can someone tell me what I'm missing?

Arthur: You are spot on! My measurements and calculations confirm your values of castor being 3.0 to 3.8 degrees from the measurements. So maybe the 5.5 degree was a typo, that 3.5 Deg was the design value. Since very few if any mechanics had an accurate way to measure the angle directly, castor when adjusted, was actually 3 to 3.5 degrees.

Good eye, thanks for sharing, Now to find a NOS perch and measure the angle directly,,,,,. jb 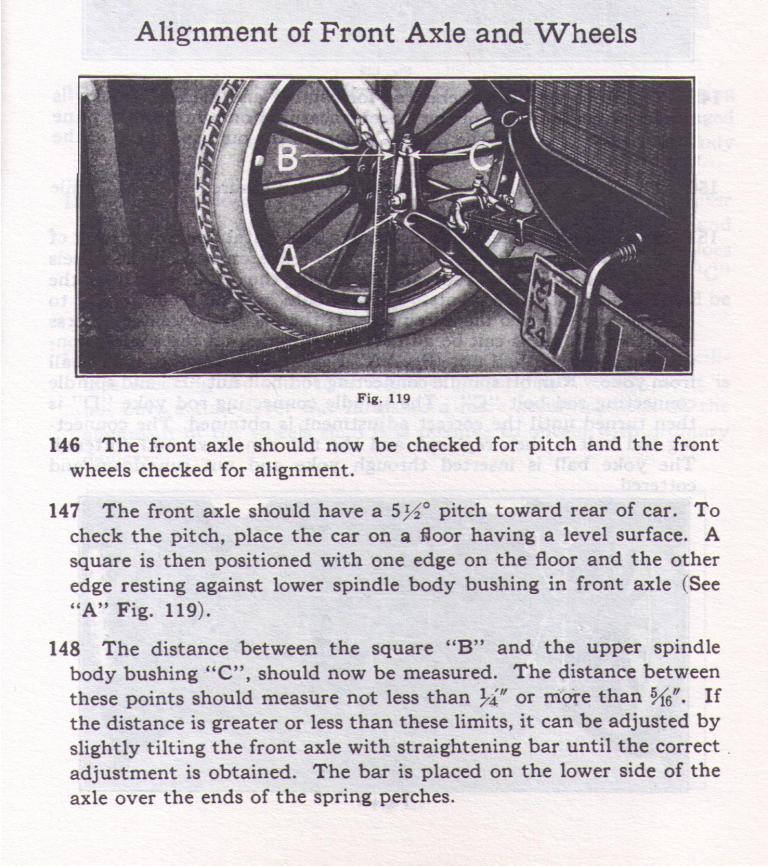 FYI, my 26-27 front end with pre-1915 above axle wishbone and perches was measuring a caster of -3.5 degrees and spindle arm bushings were very loose. Not surprising the steering was frightening. I'll be swapping out the parts and doing a proper alignment check this weekend.

Arthur: Agreed. The same measurements are given in the Ford Service Book Essentials, but I do not remember the service essentials mentioning the 5 1/2 degree angle. I think most check and adjust by the method shown above, not by direct measurement of the angle which would be difficult.

I would be very interested, as an academic exercise, to measure the actual angle of a NOS spring perch to see what the original factory supplied angle actually was.

I have a new spring perch on order. I'll try to measure the angle when it arrives.

The usual reason for having a negative castor angle is that the perches are wrong way round.
You can turn the axle round to fix it, but NOT the spindles as you must have the LH thread on the RIGHT side.
I guess the logic is that if the split pin is lost, you just lose the wheel after the nut falls off. The other way would result in the bearings becoming tighter until they seize and the axle breaks.....and then the wheel falls off!
The later perches have a centre 'dot' on the top. This must be aft of the shackle housing centre line to tilt the axle back.

Once the perch is correctly fitted, the castor angle is really controlled by the bends at the ends of the radius rods. The spring will flex to the axle's angle.

Chris: Correct, particularly after the perch and spring connection is worn even slightly. However, I remain curious as to the angle Arthur will be reporting, jb

When I bought my car it had the 1/4 to 5/16 on one side and 0 on the other. I had a hell of a time un twisting the axle. It took a 6 foot pipe wrench (with aluminum plate to protect the axle). I used my floor jack on the end of the pipe wrench and it lifted the front end of the car. The only reason the other side did not change is that I have the after market wishbone reinforcement.

Increasing the caster will make the car steer better going forward by worse in reverse.