What is the best position of the Spark Lever (advance / Retard) for my 1915 Roadster? One of my friends was mentioning that the Lever should be all the way down (Full Advance) each time one drives a T? I found it a bit difficult to digest hence asking all the experts.

Presently what I do is move it half-way down each time I start the car. Is that the right thing to do?

The best position of the spark lever differs from car to car - and varies with the driving conditions. Do you have a working magneto so you're starting on "bat" and shift over to "mag" as it's running? In that case it's kind of self regulating, just pull down to where it runs best and if you don't have any steep hills where you drive, you may keep it there the whole drive.
Other cars may be more fuzzy and runs best with some adjusting. Just listen so the engine isn't knocking, an engine runs best with as much advance it can have without knocking. If it knocks, like in a hill, then retard some. If too retarded, it'll run hot with less power.

Thanks Roger. Yes I start my 1915 Roadster on "Bat" and move it to "Mag" once it runs. Most times I keep It at half-way but was a bit confused if I am ok or should move it to 100% advanced.

Just try how it runs at different settings, if it gets stronger without knocking further down, then it's better. When driving on mag there are usually only two or three spots on the quadrant where the engine runs good - you can find them by trying.

As you become more comfortable driving your T you will notice by both feel and sound where the spark should be to allow your car to perform at its best. It’s different for every car, but there are some standards. There is a nice chart that I’m sure someone will post ... I don’t have it handy.

Thanks Mark. Someone in India mentioned to me that I will break my manifolds if I don't put the spark level on 100% advanced and I found that quite weird.

Here's the chart. Keep in mind that this shows the lever positions for a factory fresh car that has the commutator timed properly, no slop in the linkages, and the spark rod bent per factory specs. For my '24, it's all the way up to hand crank on battery; about 4 clicks down to hand start on mag; a few more clicks to idle; about 2/3 down for lower speeds in high gear and almost all the way down for higher speeds in high gear. On mag, it's pretty easy to tell where the nodes are. That's where the engine runs the smoothest. There are sort of dead spots between these nodes where the engine runs rough. I adjust mine as I drive. 2/3 down for starting off and pulling hills and almost all the way down for cruising speeds. Running too far retarded limits RPMs and therefore top speed. It will also overheat your engine. Too far advanced when pulling hills will rob you of power and beat up your crankshaft. 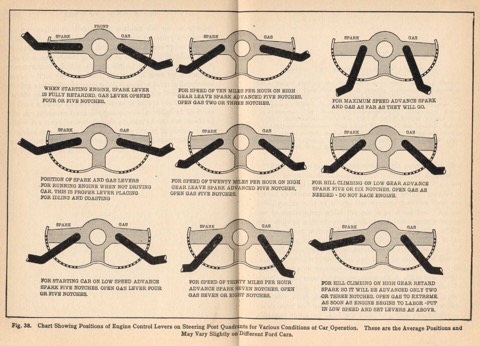 Everyone so far are giving you good advice, but i would like you to understand what you are doing so you do not have to think of spark and throttle movement as rote, with the exception of starting the engine, starting on bat you must fully retard the spark, starting on mag you need to advance spark lever about 3/4 inch on the quadrant. Starting is the only rote position.
To understand the spark lever think of a conventional distrib before electronic ignition, the distrib is advanced and retarded automatically to set its timing for a given rpm. Higher the rpm the more it is advanced, rpm slows the distrib retards, maintaining the optimum timing. So for the model t that has no automatic timing advance or retard mechanism, the driver has to do it. Except for starting of course, you move the spark lever up and down to set the timing for the given rpm, set the spark for the rpm that the engine is at now, not for what you want the rpm to be. On the other hand you will set the throttle without a thought, want to go faster you advance it, slow down retard, you know by feel and the vehicles reaction to the given driving conditions if you want more or less throttle. Just as instinctively you move the gas you should likewise move the spark, but for the actual engine rpm at the moment. Take another good look at the chart provided earlier and think of it from the engine rpm and vehicle speed perspective, it is correct, but not by rote memory, that is the obvious spark and throttle position for a given road condition. Going up a hill for example, the vehicle is slowing down hence adding throttle, to max if steep enough, but the engine rpm is slowing down with the increased load on it so spark lever needs to be retarded to keep up with the current engine rpm.

The reason you need adjustable timing is because it takes a certain amount of time for the pressure inside the cylinder to build after the plug fires. When the plug fires, it ignites the mixture and the flame propagates through the combustion chamber things start to warm up and the pressure starts to build and pushes the piston down. Since this doesn't happen instantaneously and does require some amount of time to happen, you want the plug to fire while the piston is on its way up so there is time for all this to happen before the optimum time for the piston to be pushed down. The faster the piston is moving upward, the earlier you want the plug to fire because since the piston is moving faster, it will move farther in the amount of time it takes for the ignition of the mixture, flame propagation, etc to occur. Simply put, the faster the engine is turning, the more advanced the spark needs to be.

As mentioned above, some cars you can start and then advance the spark pretty much all the way and just leave it there. Others want to be adjusted. My wife's Touring likes to have the spark advanced after you start it and retarded when you shift into High and the rpm go back down, then advanced again as you speed up. My TT is more the set it and forget it kind. I run both with the spark fully advanced when going down the road. Why not? If it's not knocking, then it's OK, and anything less can cause overheating.

I agree with Roger Karlsson and also with Ron Patterson. My T will not start with the spark fully retarded. With about 3 notches of "advance" (the spark is still slightly retarded - occurring after TDC) it starts beautifully. Under most conditions I advance the spark to where the engine runs smoothest and forgiddaboudit.