I guess this learning thing just keeps going. Went to the shop to get an easy out for work this morning and noticed that the right rear tire is flat from my drive sunday. I had added 5 lbs before my drive after sitting all winter. I guess I will learn how to fix a T flat. Havent patched a tube since my 1st car a 53 €he^y. I have a rim spreader and patches. Let the fun begin.

It is only flat on the bottom. Just turn it over and you’ll be fine.

Just call AAA and get ready for some great fun when the truck arrives.....

I think you both should come help me. We could have a lot of fun.

Dallas-
Pull out the valve core, clean it out, and put it back in and try to air it up again. Sometimes when you air up a tire, a little bit of debris will get in the valve and cause a slow leak. Air it up and give it another day or two.

Keith, I never thought of that. I do live on a gravel road. I have to look but I usually keep caps on them but have been known to forget to put them back on.

Kieth, just removed valve core and blew out stem. Worth a try. The cap was on. Now where to find old air to put back in ?

You can find the old air with the canned Lucas electrical smoke! Aisle 3 I think, at local auto part store!

I’m sure someone here has some NOS Ford air.

Carry a spare or two...I carry two...if one is good, then two just hast to be better still.

Dallas, I had a front tire on the green TT that went flat all at once after setting a couple of years or so. Never leaked down, just went flat. The core seal had just disintegrated while setting there. No telling how old it was, old tube that had probably been in there for years. Put in a new core and never went flat again until I took it off of the TT some time later. A little spit on the core will tell you pretty quick if it is leaking. Of course soapy water will do the same thing, but spit is closer and handier.

THE SMOKE LEAKED OUT OF ONE OF MY ELECTRIC MOTORS AND NOW IT WON'T RUN ANY MORE.. will that Lucas electrical smoke fix the motor?

Eugene, it may if your motor is RHD.

Dallas, you just have to pick the right place to have a flat. Years ago on a National T tour with my 14, I pulled up to an intersection where there was a Good Year tire store. The guys were sitting out front on a break and they hollered over to me that I had a flat tire. They yelled to me to pull it in, and they would fix it for free. They were all excited to work on a Model T. I figured to myself what a deal even though they didn’t know what they were getting into. They really had a heck of a time repairing it. They told me that they do 18 wheelers all day long and they were easier than repairing the T tire. They got it together and I gave them a good tip, and we were on our way.

I have a good spare I carry with me. I have had good luck with flats as flat tire go. Two have been at home and one just as we pulled off the interstate off ramp. Not a goodyear store but at least its in the shop. I havnt been to the shop yet this morning but I will let you know if its still up.

No such luck. FLAT. some time this week I will break it down and see what the problem is. Any tips would be good. The tires have good tread but have light checking. They look fairly hard as it is not flat to the rim but about 2 inches from sitting on the rim.with demountable rims it shouldnt be too tuff.

Next month the MRS and I are going to the Model T Museum and then Gilmore. So if you can wait, I think you are between these two locals and we can help you fix the flat or at least make the other side match so it rides evenly.

Dallas, use the rim expander carefully to collapse the rim but do not use it to expand it. Easy to bend the rim. Cut two pieces of 2x6 to the curve of the rim and one on top and bottom with a jack between to expand the rim. Will push from center of rim and not twist it

Thanks Vern, I thought I would put the spare on and then I would have a spare flat. You guys are always willing to helpthe new guys! I plan on going to Gilmore. May even drive the T. Its only 1 1/2 hours in a modern so 3hrs would be a good run. 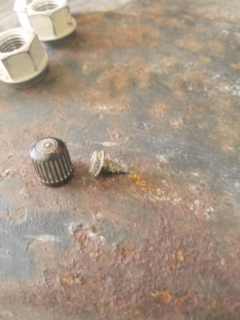 This little bugger is the problem. I got screwed!

After a bid wrestling match on the shop floor and some head scratching, I pulled out the old smarter than me phone and done a thread search mtfca.
Wah Lah. 2009 thread about installing tube and flap in tire the install on rim as a unit. You guys help people years down the road!!! Tire is mounted and wheel is on the car. Thanks MTFCA!!! Vern, you guys can still stop by. Plenty of T work to be done or at least talk about it over coffee.
Drive safe and often.