Had a weeping freeze plug so installed a buffalo nickel last night. 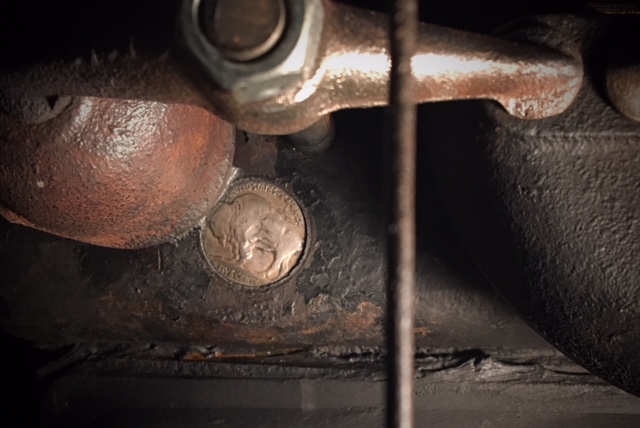 Mark, I raised the value of my RPU by 15 cents also. The cool meter is much higher.
Looks great Mark.

My arrangement is one chief in the rear hole, facing forward, and a pair of bison facing him in the other holes.

The people who collect coins must cringe when they see this. It would be the same for someone here to see a model t hot rod. Just thinking!

That’s quite a comparison! Actually, coin collectors are well aware that the buffalo nickel was one of the poorest designs in regards to wear. The date numbers are the highest part of the coin making them wear quickly in circulation. So there are a lot of worthless buffalo nickels out there. My local coin collecting shop had about 1000 of them in a big box ... 15 cents apiece or five for a dollar.

A lot of buffalo nickels are of only minimal value because the dates have worn off. They're almost no less collectible for having been jammed into a Model T block. I have a couple dateless examples I'm contemplating using this way myself.

As an alternative, it might be fun to use a brand-new nickel from the year the engine was built as a sort of cornerstone marking the time of completion. Is there any disadvantage to the metallic composition of a modern nickel versus a buffalo?

Steve, This was a quick repair of a single weeping plug. Next time I remove the manifolds I’ll replace all of them .. and then think of how man and beast interface. There is an updraft U&J installation in the future and unless I see another plug give way sooner, that will be a good time. I am anxious to see how this one does. I did have to file the diameter down a little after putting a dome into it. I used Ultra Black for the sealer.

David, That’s an interesting question. Not sure if nickels got the same treatment as pennies. I do love nickel in all sorts of antiques ... Leica cameras for instance. I have been looking for a way to get the shiny nickel plating of my new radiator to be like the warm tone of the other nickel parts on my T.

Interesting you should mention that. I want to nickel the windshield frame, (Peerless) radiator shell, and headlight rims on my car. I don't really want the look of fresh plating either. I've been contemplating going with electroless nickel. It's not the same as aged nickel, but it doesn't look as much like chrome plating as brand-new nickel, either.

Now, this is an interesting tip! I restored an antique Johnson outboard years ago and used nice, shiny pennies for the freeze plugs. I'm rebuilding a 1918 T engine at the moment and just realized that the freeze plugs need replacement, so this post is fate!

Hmmm....$1.29 each from the vendors, or a nickle each from my coin jar.....which to choose? Seriously, was any "sealer" used or is the nickel a close drive fit?

George, when I did mine with nickels I used a little black RTV to ensure a good seal. Maybe the red would have been better suited but the black stuff matched the block. So far so good.

Looks great Mark.
George, I replaced the three holes with nickels last year and think JBW was used as a sealer. I did grind the edge square after making them convex (outside) before fitting them. JBW was also used on a modern engine that had rotted plugs and in need of a rebuild. It worked so well that I decided to make the buffaloes permanent.

Not to worry, I used well worn nickles in mine. I think they are worth more now than before I installed them.

Thanks for the info guys......I'll use some JBW on mine I think.

I used the old Permatex that's been around forever and got poor results. It hardened and leaked. The next time I used Ultra Black. It's been fine.

I recently found the stash of old coins I collected as a kid in the 1970's and gave the whole box to my daughter (in her 20's).

She was oohing and aahing over various coins and kept asking me what individual coins were worth. With a couple of exceptions, I kept telling her the quarters were worth 26 cents, the nice pennies were worth 2 cents and the buffalo nickels were worth...a nickel.

I'm sure I was off a bit in my evaluations, but she got the point. Unless you're dealing with an outlier, the wheat pennies and buffalo nickels are kind of like beanie babies. They simply made too many of them to really be worth anything.

Now using a buffalo nickel as a Model T freeze plug...now THAT is cool. I'll probably be replicating that on my car.

If you look up coin values you'll see that they're all over the value map. Some wheat pennies are worth a few cents, and some are worth thousands of dollars. The same goes for buffalo nickels. It all depends on condition and rarity.

My block is plugged with whatever nickels were in my pocket that day to commemorate possibly the most important chapter for that car: the one where I own it.

Mark, they sand blast jeans and cut holes in them to give them the aged look. That would work on your radiator shell, or you could just let it age!

Yikes ... no, it’s not the radiator shell ... it’s just the filler neck. Just want to oxidize the new plating a little to reduce the shine so it will match the radiator cap.

In Australia a 2 cent coin (now out of circulation) is used. It needs to be dished with a ball pein hammer over a 5/8" socket to reduce the diameter. However, dishing it causes the edges not to be parallel to the side of the hole in the block, and it eventually falls out. The way around this is to grind the edge of the coin so it's parallel again. Line the hole with JB weld and punch it in. The repro welch plugs are a waste of time and rust through in a few years - use a coin. 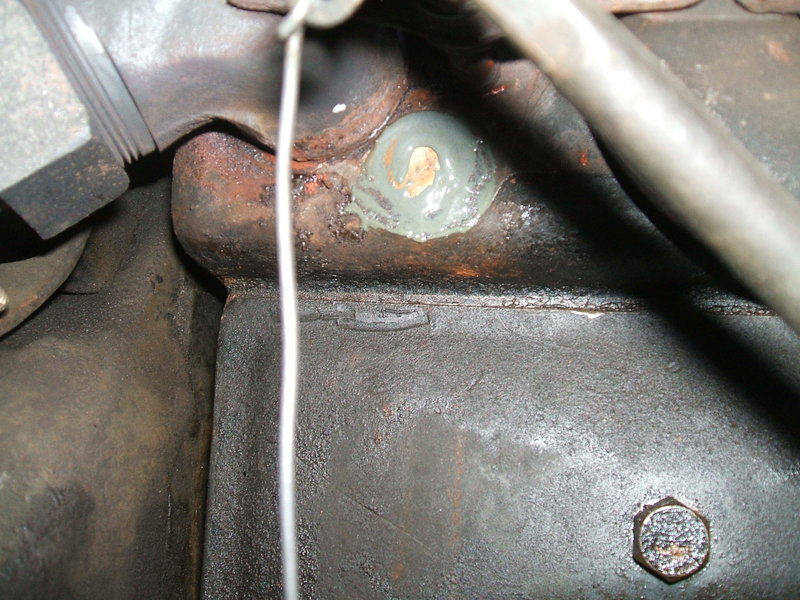 I dished the nickels with a ballpark hammer, just a little sealant, then installed with wooden hammer handle to press them back flat and parallel. No grinding needed.

Mark, are you sure your filler neck is nickel plated? A lot of repro necks were chrome plated. Dave

Dave, it’s a new Berg radiator and they offer the filler neck in either nickel or chrome. I bought nickel.

Mark, your coin shop's deal is a winner! I was offered a deal like that once, on some brass wood screws, by the purchaser!