Here's another nice T image from our local museum (The History Museum of Hood River County (Oregon). This is A.I. Mason and family out for a ride in their very shiny 1914? T. No one wanted to be left home.

The Masons were among the early orchardists of Pine Grove in the Hood River valley. The area still looks very similar, though the road is paved. I hope to take my '27 pickup up there once I trust the steering and brakes.

Was it common to run smooth tires in the front and tread on the back? 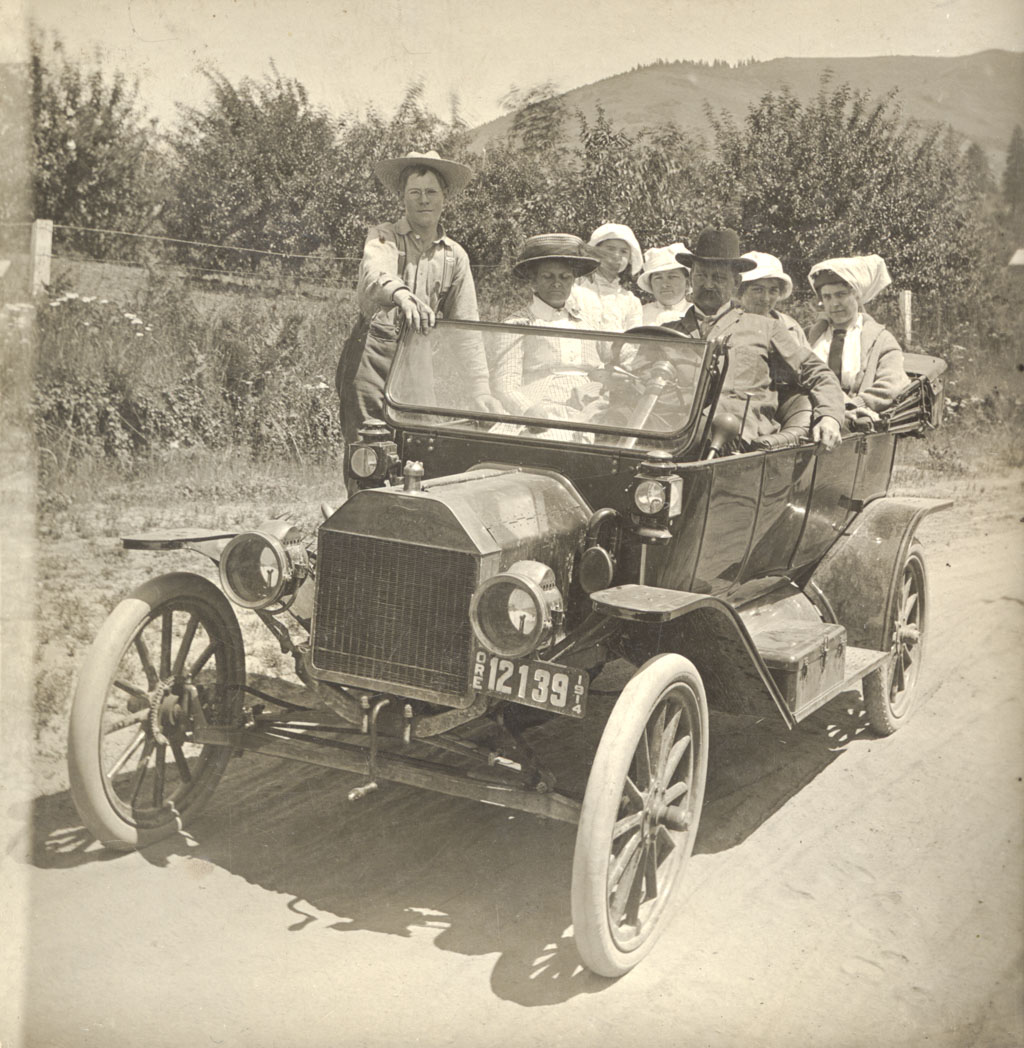 Hey Arthur, GREAT photos, I look forward to your posts,keep them coming!!

I see it’s got to gas headlights. Where is the gas store? There is a toolbox at the driver side which should be a door.

Great Photo!! Thanks for sharing it with us.

No driver's door on U.S. production cars until 1926 except TTs & Torpedos, I believe.

Late '13 or early '14. '14 style body which started being used in July of 1913 due to the weakness in the design of the rear section on the "true" '13s. Car then has the '13 style front fenders and windshield which were apparently intermixed with the newer styles for a couple months. I don't know the lamps well enough to speculate on the maker or series of lamps. I know they did change several times through the two years ('13 and '14).
Since the car has a "tool box" on the running board, and no carbide acetylene generator, it likely would have a Prestolite tank acetylene tank somewhere. It could be under the rear seat, on the other side running board (not common then because it tended to be in the way for people getting in and out of the car, but it was done sometimes), maybe even mounted under the car (seldom done, but I have seen a few pictures that way!), or even inside the "tool box".
As to Steve B's last comment, the USA built model Ts did not have a door on the drivers position on either runabout or touring cars until after 1925 (once the front was enclosed in 1912 for the touring cars and 1913 for the runabouts).

What do you think that rod is next to the horn bulb, maybe a cutout? That car is most definitely an early '14. It still has a lot of '13 features.

That might a pressurizing pump for the gas tank. Probably need it in those hills when low on gas.

Side lamps appear to be E&J. What is the plunger looking rod next to the driver? Great photo thanks

I have an extremely knowledgeable person right next to me and he thinks the car is a '13. I think it's an early '14.

For what it's worth, I think it is an early 14 also. I would bet there are several 13 parts on this car. Wish we could see the seats. Armrest folds look like leather.

Looks like the gent has a banged up finger.

It can be called either '13 (late) or '14 (early), and most likely be correct either way. It IS a '14 style body, and like the '24 style cars built in July of '23 are usually said should be called '24 because of the confusion of people getting wrong parts and information (high radiator versus low radiator and ALL the surrounding parts and body construction that is different). The number and severity of changes between the '23 and '24 style that they really should be called by the style, and not the month/year built.
Truly, the same thing could be said of the change from '13 to '14. Any way you slice it? Either way for the '13/'14 is not really wrong. I do feel the '23/'24 needs to be called by the actual style year for the simple reason that otherwise, without always being absolutely clear about what you have and what you need? One IS going to get the wrong parts or advice. I have seen that happen way too many times.

I would bet that the one-eyed guy on the running board loses his hat at 5 MPH.

I agree that it is a '14 style body. Probably a Beaudette.

The July, August and September cars have "1913" serial numbers and Ford must have counted them as "1913 cars" even though they had the new body style. I have one but I call it a '14. It's a Beaudette and the bead in the rear panel is different than later '14's.

The gas headlights are E&J and the Prest-O-Lite "B" tank is probably in the "tool box".

Here is an add for them: 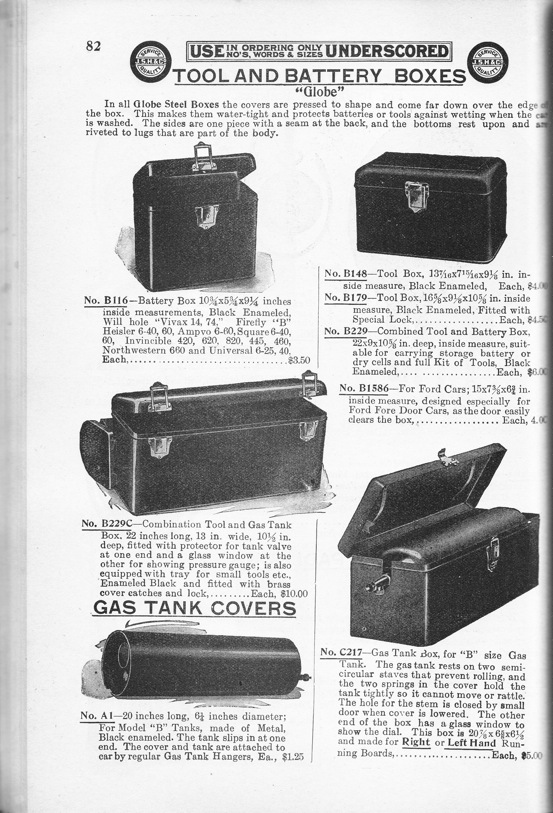 The box with the "B" tank valve on the outside is OK but I sure wouldn't carry my Prest-O-Lite tank inside a tool box or under the seat.

I blew the door open on a Victor spotlight I have on the '14 using a friction flint igniter a year ago. Didn't hurt anything but got my attention regarding "enclosed spaces" and acetylene.