I was at the Speedster Reunion last Spring as a spectator at the hill climb. I introduced myself to an individual I had spoken to many times on the phone but never met. In our conversation, it came up that I did stained glass windows and wood working as a hobby. He had inquired about the frame I had cut and assembled for a 15 touring for another T owner. He showed me a picture of this window on his cell phone, and ask if I could duplicate it. He wanted it in a lit walnut case to hang on the wall. THe glass is 36 w x 18 h. The pictures are on my workbench, and with the lights off lit 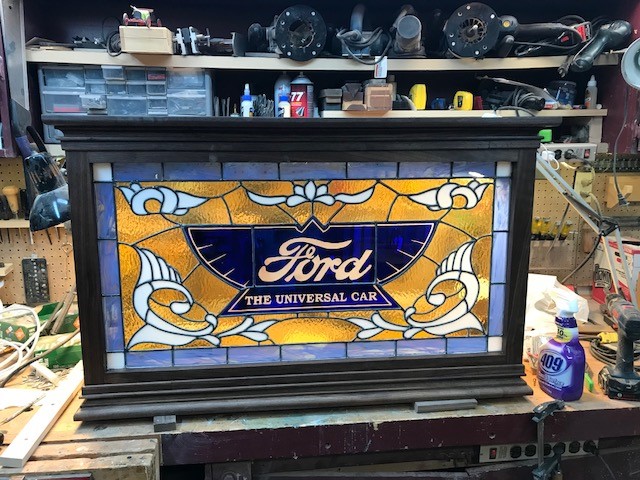 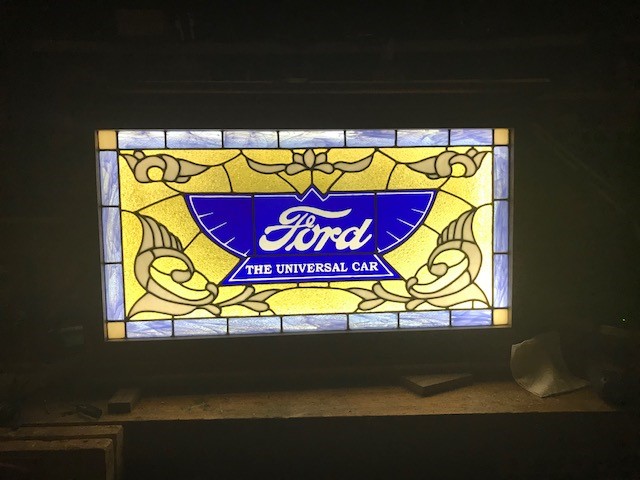 Wow. Nice! Wish I had that kind of talent..and patience! Looks like it should be hanging on my wall!!

That is amazing. I'm imagining it as a transom window above an office door--though I have no idea if stained glass is durable enough for that.

Yes it can be David with proper framing.

Stained glass can be stronger than you think, and there are ways of reinforcing a window to hold up for something like a transom.
What I did not mention before is the lettering, "Ford" and "The Universal Car" are all sand blasted in reverse on the back side of the glass. The glass is called "flash glass" because it is clear glass with a "flash" or coating of blue on one side. It was the only piece of Cobalt Blue glass my glass distributor could find in the country, and it cost me $180 just for this one piece of glass, the rest of the materials for the window totaled less than that. I may have enough blue flash glass to duplicate this window, i would have to lay it out on the pattern to confirm that. What surprised me was how deep I had to sandblast into the blue to cut through the blue.

Hi Doug, Did you ever try or see someone use a CO2 laser to cut images into the glass? I have experimented with a 50 Watt laser to engrave numbers and lines into Borosilicate glass with some success. Could you use a ceramic stain? I think a company called American ceramics sell stains but maybe not all colors. Very nice work. Erick

That dark walnut looks fantastic around those colors!

I have seen a stained glass window in an old Ford Dealership. It had the Ford logo. I think there were at least two windows with stained glass there.
I think it was in Conway, Missouri. It was near the railroad tracks and was being used as the community center or senior citizen building.
Anyone that is good at google earth want to try to see it on street scene? I remember it being a tan brick building.

Herb: Here's the Conway, MO, Senior Center at 105 State Hwy J - it's an interesting old Ford dealership, but the logos doesn't seem to be stained glass? 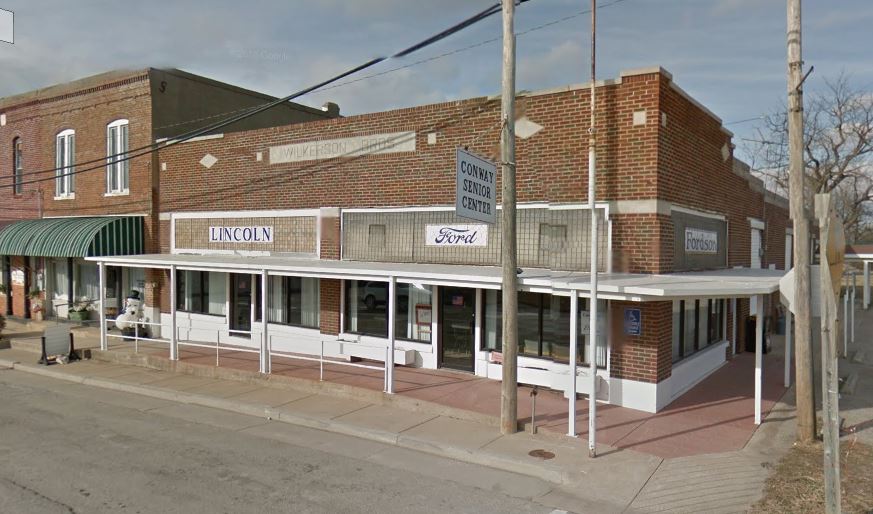 The signs have been worked into the grid of leaded square glass that forms the whole "window" above the porch awning. This was very common on store fronts. The "Ford" sign appears to have a border of leaded glass. The lettering might be applied to sheets of opal glass, probably "fired" on like a ceramic over-glaze. It would be interesting to see the building at night, if the windows are back-lit. Nice to see the old dealership building !

Thank you Roger.
That must be it.
I went there with my wife to take our daughter to a camp. I believe it was Camp Barnabas. That might have been 15 years ago. I did stop and take a picture of the windows and thought that they were like Rich said, part of a leaded glass grid.