Now that I am retired, I am getting to projects that have been on the Back Burner for some time.
(I have a very large Back Burner).

One of the Back Burner projects is to restore my accumulation of vintage Waffle Irons.
So, for the last three weeks I have been working on nothing but Waffle Irons.

Below are the fruits on my efforts.
Now it's time for a Model T and Waffle breakfast 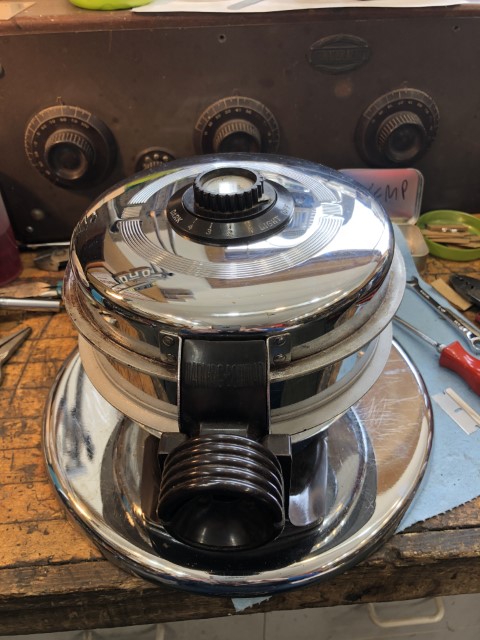 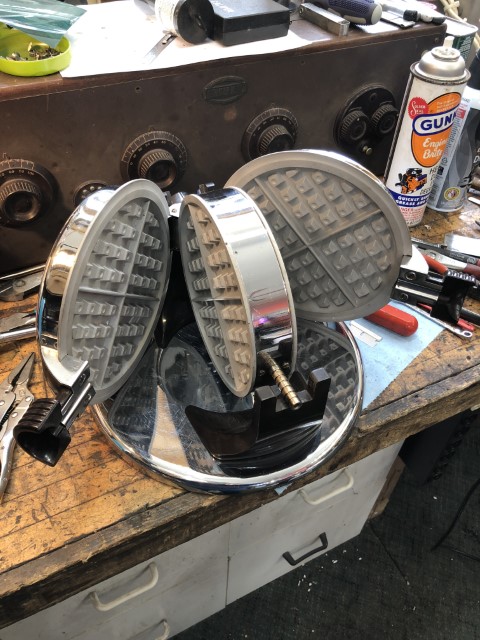 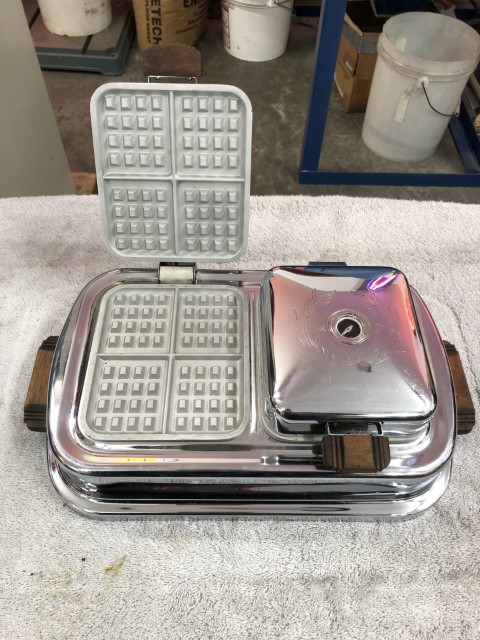 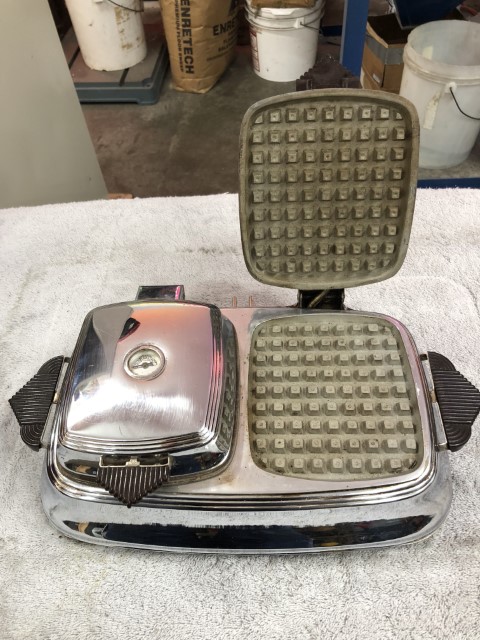 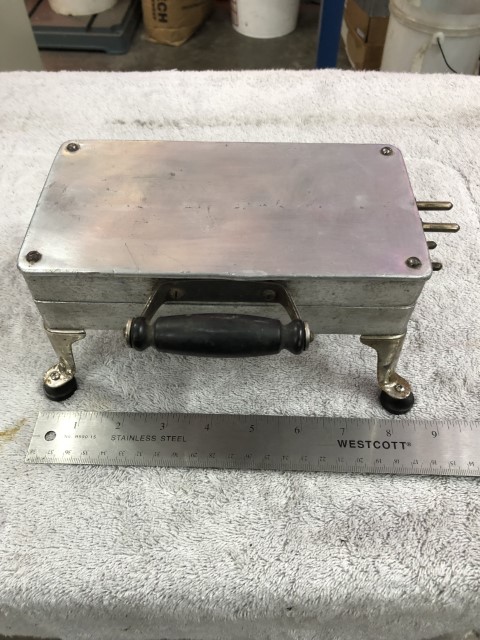 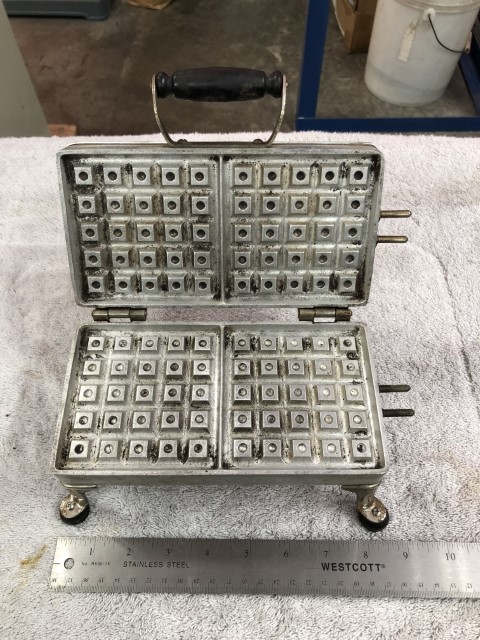 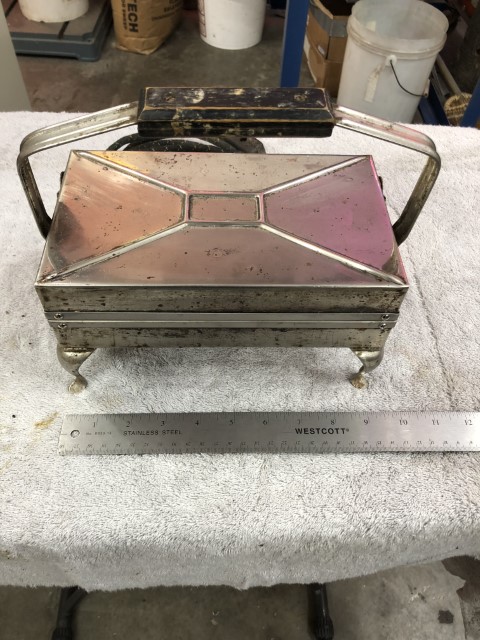 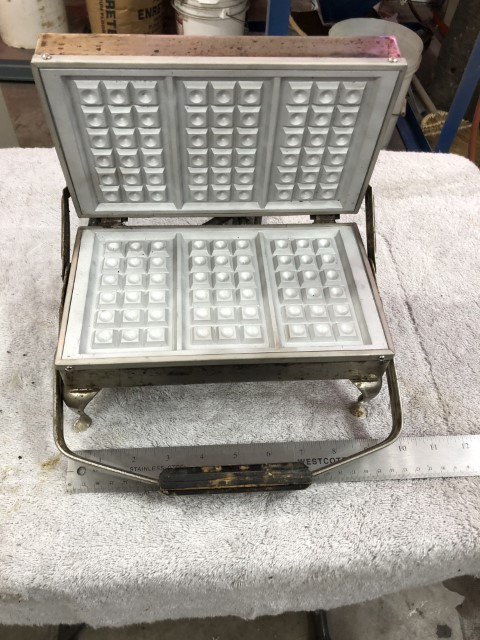 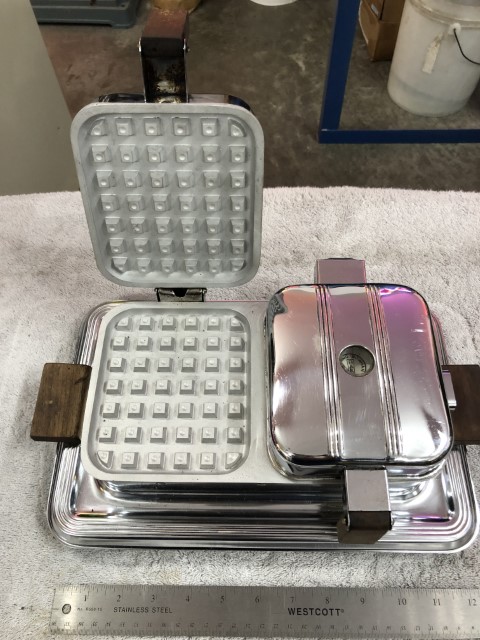 When are going to put some energy in that Atwater Kent Model 20?


A few years ago I bought a cast iron waffle iron made for a wood stove. I thought I had it cleaned up really well. Made myself a batch of waffles and got sick as a dog. Must have leached out some old, rancid grease. Haven't had a waffle since. However, those are some nice irons!

Most of the restoration time was removing the old grease buildup and deposits.

I have been letting the irons heat to over-temperature to burn off any residual residue.

The next step will be to season the irons.
I will make a simple batter and and Bake & Discard a half a dozen or so waffles for each iron.

Kinda sounds like you are waffling a bit here .....

You need to add a Stover waffle iron to your collection! Stover made one of the best stationary engines back in the day, along with all manner of cast iron household gizmos. Their waffle iron...designed for a wood stove...had a cast iron base that fit over a stove "eye" and a double sided waffle iron using a ball joint on one end and handle on the other. You poured the batter into one side, closed it and flipped it at the right time using the ball joint.

For some reason, I am enamored with waffle irons. I started collecting cast iron waffle irons. Jerry Van, pay attention! I clean them up real good in all the nooks and crannies using steel wool and oven cleaner. Then I clean them thoroughly. I then season them as you would a cast iron skillet.

When I make the waffles, I get the iron darn near red hot. Makes the best waffles -- and waffles and chicken!

Mr. Andreason, one of my Aunts in Corpus Christi made me my first waffle, I don't think I had ever even heard of one before then, if memory serves, she had an iron similar to this, would have been in the 1930's. I do remember that it fit the eye on her wood stove, and I didn't have another waffle till the War, people and Cafes just didn't have stuff like this back then. Thanks for the memory, I had pretty well forgotten about it.

Here is what I know about the waffle irons :
From the top :

I have a World Class Waffle Recipe if you want it. NOT the just add water type. U use yeast in it...etc. Really good!. NICE JOB!!!. Do you think the waffle will stick the first time or two that you use one?... or are they too pretty to use?

We make our waffles from a 1937 recipe. Uses LOTS of butter and is absolutely delicious. 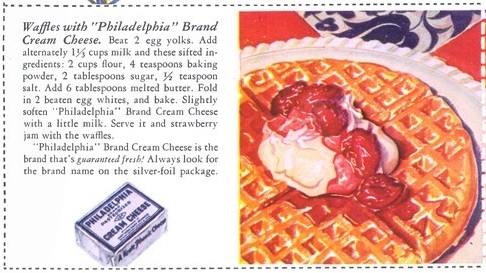 The cast iron waffle iron that poisoned me has the recipe cast right into the iron itself, which I thought was cool and why I bought it.

Thanks a lot guys! Now I am craving waffles and need to make some.

But you guys are missing the most important waffle side kick...Crispy artery clogging hickory smoked BACON!

Very cool Bob! I must admit that I am very picky on my waffles. I hate those small, circular, thin ones you get out of the new ones now. As a kid my family made waffles using a 1980's electric square unit called "Belgian Waffler" it was made by Munsey. It made a fantastic, large 8X8 inch single square waffle that was thick and fluffy/tall. That machine finally broke and I was devastated. I spent months online until I found a replacement of the same model. I'm a happy waffler again.